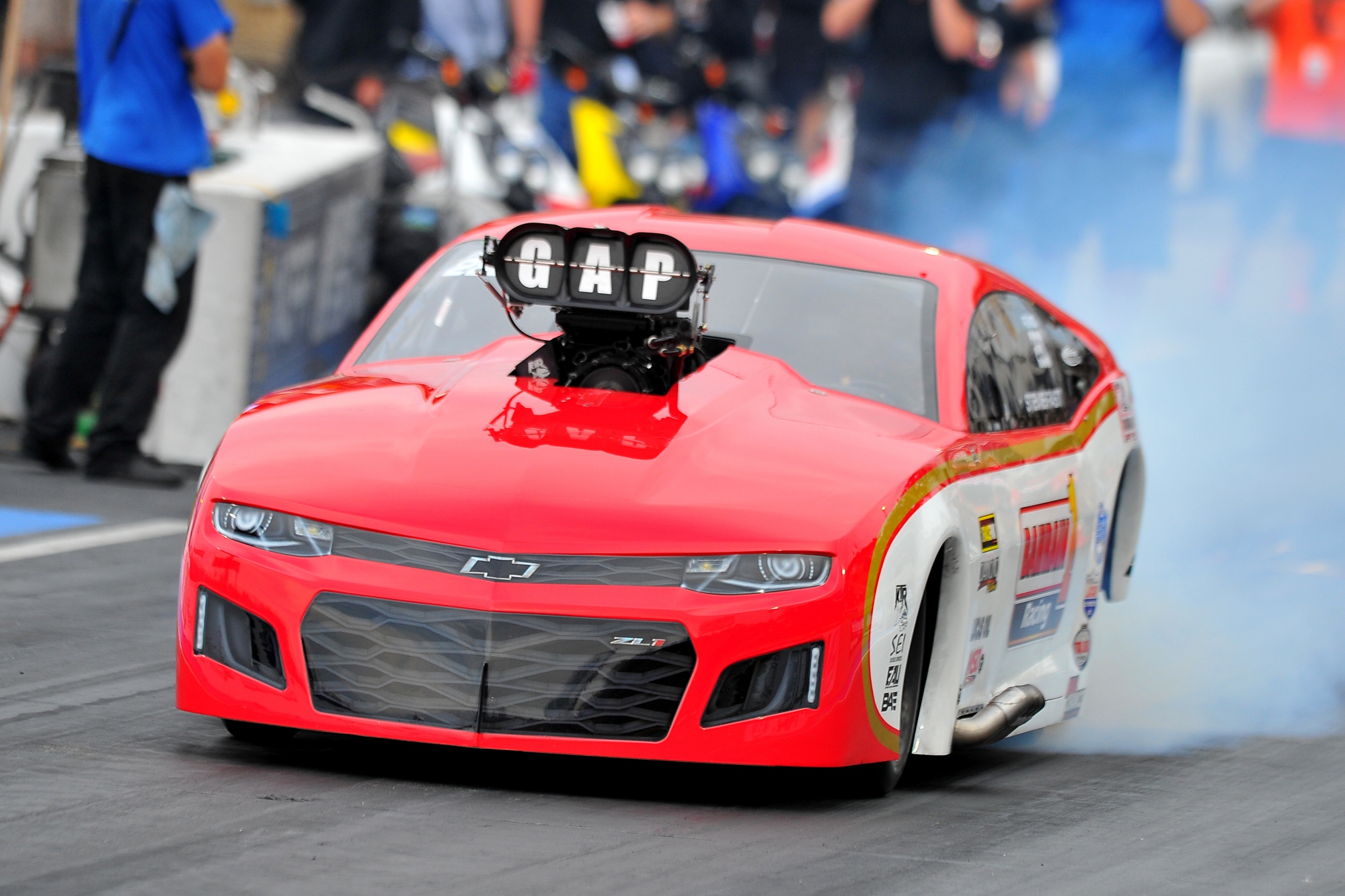 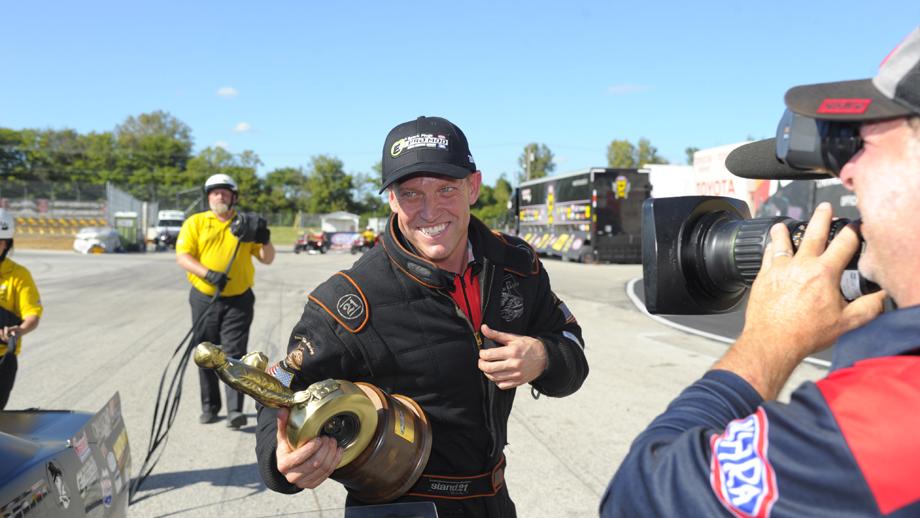 Stevie "Fast” Jackson was channeling his inner Scotty Cannon Wednesday afternoon, trying to figure out how to make his race-winning combination remain on the cutting edge with his supercharger overdrive cut from16.5-percent down to 14.55. Cannon had the rules changed on him when he raced Pro Modified almost two dozen times during his competitive years from 1991 until 1998.

Tuesday’s rules adjustment was the first for Jackson since he ascended into the point lead for NHRA Pro Modified.

Jackson blames what he calls relentless whining for the latest rules adjustment.

“I think that racers should never be involved with making rules,” Jackson said. “I think whining and bitching and crying 24 hours a day about everything is part of what’s wrong with the sport. So I try not to get too wrapped up in it. Does it affect us? Yeah. I mean it affects everybody that has a limited amount of time to get ready. I’ve never run a blower car at 14 and a half over, so the superchargers that we have are junk now, the motors that we have are junk. We’ll have to change some stuff around, spend a bunch of time on the dyno and go out and make 50 runs before Indy.

“The people that it hurts are the people that can’t go do that, you know, that can’t turn around and change as much as what it is. They’ve been throwing rules at me my whole life, so it’s not anything unusual. I don’t understand exactly what [NHRA’s] trying to do, but again, I’m a drag racer - I don’t run a racing organization. You know, a lot of people like to get wrapped up in stuff, jump up and down and scream and I try to focus on playing by the rules instead of making them.”

Multi-time Pro Modified champion Rickie Smith has been one of the largest proponents for a rules adjustment, primarily for the supercharged combination.

Jackson believes Tuesday's NHRA ruling doesn’t make him and Smith any more of a rivalry than they already are.

“I try not to pay him too much attention when he starts jumping up and down because I actually like him,” Jackson admitted. “I think that his passion is good for the sport even though what he says come across wrong sometimes, he generally actually believes what he says, whether it’s wrong or not, and I think that drag racing needs that.

“No matter whether I agree with somebody or not, I never try to down a personality in drag racing because I think that that’s what it needs. I don’t care. All they can do is take their best horse and put it in their lane over there and just see if they can beat my best horse. I don’t know about rivalry or not. I don’t understand the continual crying all the time, but maybe that’s how people get things done. I don’t know.”

Jackson believes the adjustment will slow his car about a .01 or .02 of a second. He’s not overly upset at the NHRA’s move towards the supercharged cars.

“I think it’s not so much a power thing: it’s a how you have to run the car thing,” Jackson said. “It’s an attitude approach to making the run that’s different. I don’t think the problem is that they knocked our overdrive down. I think that if they wanted to slow down the supercharged cars to where the nitrous cars are, I think that taking overdrive away from us is okay.”

Additionally, the NHRA made a substantial move to adjust the turbocharged entries limiting the pounds of boost from 36 to 33 pounds. This move has Jackson scratching his head. Even though he admittedly loathes what he calls the “piece of s*** turbos,” he believes the NHRA’s tech department went too far.

“The parity in the rules was pretty close,” Jackson explained. “I know people tell me I’m stupid, but if you look at just the last race that we had, it wasn’t killer air, it wasn’t terrible air, it was what I would call a mediocre air race. 2,500-2,700 feet, not terribly dry, medium barometer, and you’ve got a turbo car that wins the race, goes out there and goes .76. I think we went .75 is the fastest we run, and then you’ve got the Trickster out there running 254 miles an hour almost and running in the .70s.

“I think when you get what I call a medium barometer of air for a race, and you have parity that close, I think the rules were pretty close. Knocking three pounds away from the turbo cars is going just to make that combination ineffective. If we have decent air, the supercharger cars are going to smash them by a tenth. And yeah it will slow them down to where the nitrous cars can be more competitive, but three pounds of boost with where they’re at, I mean that’s almost 10 percent of boost. That’s a huge change. I’m fine with the blower overdrive. 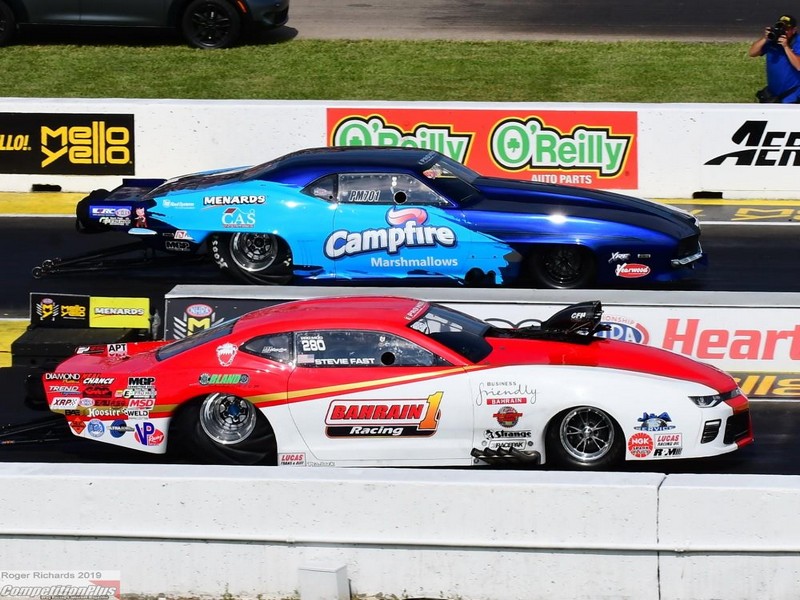 “Most of us generally out here want it to where any car that shows up that can qualify, no matter its power adder, can win,” Jackson said. “And always try to be very even-keeled when I talk about rules and stuff. I never want just to show up and smash everybody. But like those guys, if they’re going to make changes like that, the only way to really fix this deal is to put a spec small turbo on it, take the boost controller away and let these guys eat. What they’re saddling them with these big turbos that make way too much boost is a car that won’t run to the front, and now they have no power to run out the back.

“You think you saw stuff blown up lately in the turbo world; those guys are really going to be eating parts, trying to be competitive with three pounds less boost. That’s a huge move. If you take three pounds away, boost away from my supercharged car, that’s like eight hundredths.”

Jackson stopped in mid-sentence and did a double take on his argument.

“And I hate turbos,” Jackson admitted. “Like I’m here standing up for them. I hate them pieces of junk. But I think that that’s too much of a move at once.”

Why don’t Jackson, a former nitrous racer, just get a nitrous car to show how it can be done if he thinks the combination can compete at the highest level.

“Oh my God, I think about it every day,” Jackson said. “I called [Khalid al] Balooshi yesterday, and I was like, ‘Please just let me hold any old 632 you’ve got out there.”

“I ain’t saying we can win with a 632, but we wouldn’t qualify last. So, yeah, I miss my nitrous car, man. If they keep heading this direction, I definitely won’t take that out of consideration for the future. I mean let them keep on helping a nitrous car and eventually what will happen is you’ll see a bunch of people jump on that. That’s what we need. We need more than two or three nitrous cars. I love the nitrous combination. I want them guys to be able to hop up and run up front. Everybody likes big ol’ flames and big motors. It’s cool when we all have a chance to win.”

Rest assured if he does, Jackson plans to hold nothing back. It’s not in his nature. 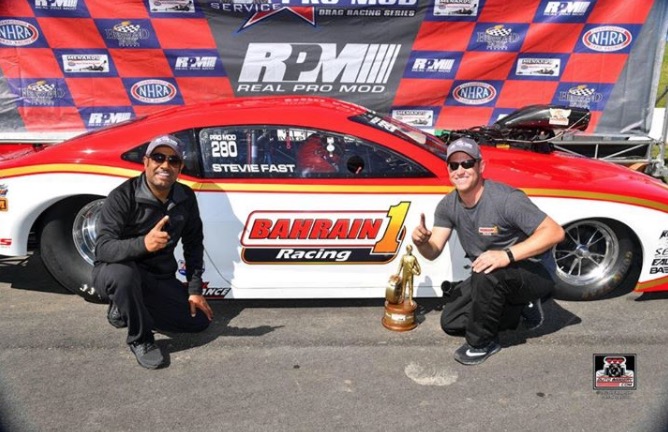 “I don’t think anybody’s ever accused Stevie Jackson and Billy Stocklin of laying up a run,” Jackson said. “We were running the rods out of that piece of junk every single time. I don’t care if it’s Q1 or Q4, we’re going to run that thing as hard as it will go. So when you’re looking at maximum effort, you’ve got to look at maximum effort across the board.”

At the end of the day, Jackson believes everyone should just chill out.

“I don’t know, maybe we should have had a little different approach about it, but in any event, I do not get too spun out,” Jackson said. “I like it when Rickie jumps up and down and screaming and cussing out all the tech people. It’s like one of the best parts of my day. So we definitely don’t want to take that out of him. I like it.

“It took us almost three years over here of blowing that thing up every single run to figure out how to run fast, run hard. We’ve done a much better job of keeping parts inside the engine this year than we have before. I’m really happy with where we at. I just hope they, if NHRA will keep it where everybody has a chance to win, we’re going to stick with what we’ve got.”