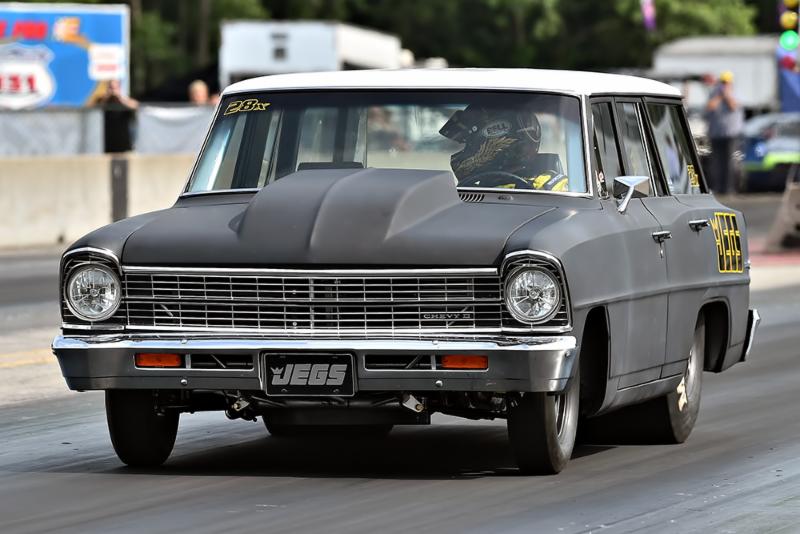 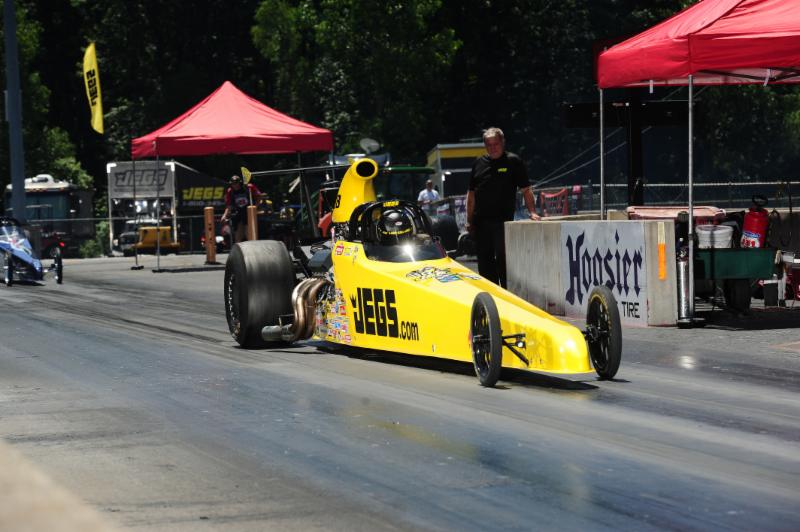 Six-time NHRA world champion Jeg Coughlin Jr. took on a massive field of 700-plus talented bracket racers in Saturday's $525,000-to-win main event at US 131 Motorsports Park and came away as a final-four finisher in his JEGS.com Chevy II wagon.

The challenge was the highlight of four high-dollar bracket races contested between Wednesday and Saturday at "the Fastest Track in Michigan," and was attended by numerous NHRA professionals along with most of the top sportsman drag racers in the world.

"What an incredible event," Coughlin said. "I'm pretty much exhausted at this point but personally very, very proud to have made it through nine rounds of some of the toughest racing ever to finish in the semifinals. It was very satisfying to be a part of what, as far as I know, was the largest single payout in drag racing history.

"With so many cars entered, just the first round each day would take six hours or so. With buy-backs, the second rounds weren't much shorter, and you go from there. It made for very long days and very short nights every day of the event. I know I started the $525K race at 8:30 a.m. Saturday and made my last pass in the semifinals around 4:30 a.m., Sunday morning."

Each day of the SFG 500 paid out large cash prizes, beginning Wednesday with a $20k-to-win opener, followed by two $50k-to-win races on Thursday and Friday. Coughlin raced both his JEGS.com dragster and the Chevy II wagon the first two days but opted to park the dragster and use only his wagon Friday and Saturday.

"The wagon was running a bit better and I just felt more comfortable in it," Coughlin said. "I think we made about 30 runs in the wagon and another five in the dragster. We also had my wife Samantha and my niece Paige participating in all the races -- plus a girls-only event -- so we stayed very busy because everyone was going rounds. There was a lot of activity in the JEGS pit and we had a lot of fun.

"Kyle Riley, the promoter, and his staff should be commended. Managing that many cars and that many rounds of racing was a big feat to accomplish. They had their hands full but pulled it off well."

Although the actual division of the massive pot will forever be known only to the participants themselves, a worldwide audience watching via the Internet witnessed plenty of negotiating going on when the field was whittled down to the eighth-finals.

"We all got together after the sixth round and started figuring out how we wanted to start splitting the pot to give each of the final group of drivers some sort of reward," Coughlin said. "It's very common to do that in these types of events, although this was one of the bigger splits I've ever been a part of. I think everyone left town happy.

"Win or lose, it was fun to be a part of such an incredible group. The competition every round was just unbelievable. I was amazed at how well everyone was running. Tough, tough racing."