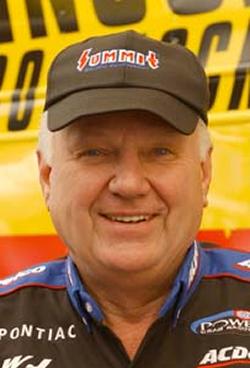 Warren Johnson didn't mind driving a race car but given his choice of getting into the mechanical aspects of a race car or climbing behind the wheel to drive it; he'd just as soon have a handful of wrenches and a challenge to figure out.

Johnson said he only took up driving early in his career because son Kurt was too young to drive, and Arlene had no interest, leaving him as the only available candidate.

Johnson, more commonly referred to as "The Professor" for his methodical approach to race cars, hasn't slowed down since dropping out of the rat race of chasing a 24-race NHRA Mello Yello Drag Racing Series schedule.

Johnson has forged a bond with past Sport Compact champion and current NHRA Pro Stock runner Matt Hartford, and together they are showcasing what a talented driver and seasoned engine builder can achieve while racing on a lesser budget than their full-time foes.

"Matt has had other engine builders, and he’s never been able to run competitively, but now he's been able to turn the corner and is running competitively now," said Johnson, while taking a break from relentless dyno pulls. "It’s a step in the right direction. We race two different styles, and that can be frustrating at times, but when it all shakes out we are making progress regardless of which way we take to get to the goal."

Hartford has two round wins to his credit this season, culminating in a semi-final finish at the NHRA Sonoma Nationals. Last year, in eight race day starts Hartford failed to win a round. He fininshed No. 16 in points despite a limited schedule.

And through Hartford, Johnson is living a dream he's held onto since 1989 when he pointed out his badgering of the NHRA to adopt electronic fuel injection back in 1989. EFI is clearly in WJ's wheelhouse.

"I had been a pain in the ass, and they figured since I was retired, that’s the only reason they okayed it, I think," Johnson said with a smile. "We had done some EFI work over the years, so it wasn't totally foreign to it when the rule was implemented. The parameters that NHRA put on it with the throttle body size and location, that stuff threw us a little bit of a curve ball as it did everybody. It was just a matter of adapting to it, and it has played out exactly as I predicted."

Johnson said one of the aspects of the EFI conversion he attempted to sell the NHRA on, was in a greater longevity of the engines.  He believes this has come to fruition.

"I told them it was going to have an increase in engine life of at least 35-40-percent," Johnson revealed. "And that looks like it’s almost 100-percent right now. We used to dyno these Pro Stock motors on carburetors then after 35 hard dyno pulls, the top ring was pretty well beat up on it. Now we’re pulling them off at 85-100 pulls, the top ring; we just put it right back in."

This reasonable longevity bodes well for Hartford and Johnson and their limited schedule and resources. Johnson can only dream of the potential of the Hartford team if together there was a budget on par with the leading Pro Stock teams and the ability to run a full 24-race schedule.

"I'd probably scare myself with what we could accomplish," Johnson admits.

Johnson said he's "all-in" with Hartford, and together they are on the right path.

"Of all the young kids that I’ve run across, he seems to have his head screwed on straight," said Johnson. "He realizes that to race Pro Stock is going be a big undertaking. He understands that I would be involved in the effort as long as the end goal is winning and not just having fun."

Johnson said while he's excited to help Philpot, he's very much committed to ensuring the program he's started with Hartford runs its full potential. Those who know Johnson understand what full potential means.

"It's always been running strong, and winning races," Johnson clarified.