KING IS BACK IN CANDY LAND WITH HIS TOP FUEL DRAGSTER 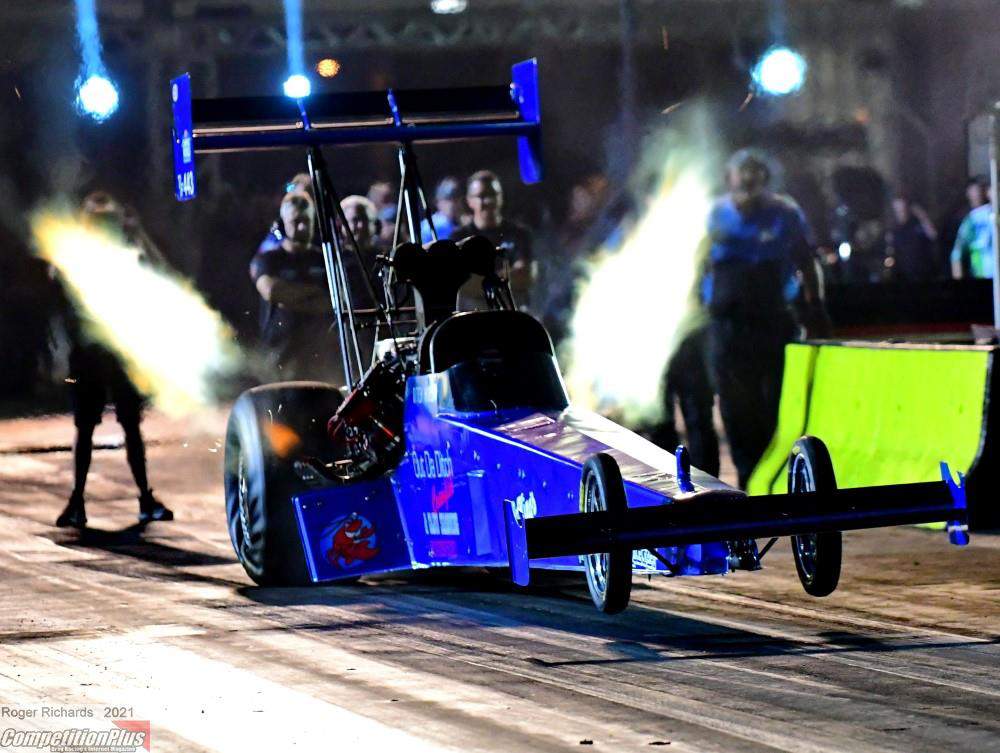 A funny thing happened to Mitch King’s La King’s Confectionery Dragster when it came brand-new out of Murf McKinney’s shop at Lafayette, Ind. Several other racers got the benefit of it more than King did, and eventually he sold it – and bought it back home to Galveston two months ago.

“This car was built for me in ’09, and then we licensed Ron August, Keith Murt, and a few other people in it, and I ended up selling it to Keith Murt. It changed hands a couple of times. Terry Brian ended up with it, and I bought it back a couple of months ago,” King said of the circuitous life of the surprisingly still-rather-new dragster.

“I was kind of looking for a few cars, but I wanted to get this one back because it’s a twin to the car that Spencer Massey and Del Cox drove to the [IHRA] championship. Belly pans and bodies and all that will interchange. I’ve got three bodies that’ll fit this car. All the spare parts are all alike. That’s why this car was appetizing,” King said.

“It doesn’t have a lot of races on it. Terry didn’t make but two or three. We’d only made 12 races with it with Keith driving it. So it probably don’t have 20 races on it since it was built.,” he said.

“We made a shakedown run against Scott Palmer Monday night [in the Stampede of Speed Nitro Side Show], which was the first time we cranked it and made a hit since I got it back two months ago. Everything was doing what we told it to. We only went about a second and a half, but it had an .845 60-foot time. It basically looks like we only warmed it up. The motor was happy that far.”

King’s strategy is set for the weekend in his reacquired entry which sports La King’s Confectionery and Out Da Ditch Crawfish, a Texas-Louisiana business that belongs to Danny Bell.

This weekend King will have veteran crew chief Donnie Bender tuning. King said, “He was available, and to have somebody of his caliber is exciting. We’ve been down here since last Thursday, putting this all together. I went to Eddyville [Iowa] with Palmer, just to hang out. I stopped and saw Terry [Brian, in Overton, Texas] on the way home. Two weeks later, I made a deal on this stuff he had left over. And we did all this in the last seven weeks.

“We’ll go a little further Friday during the day. If it looks good, we’ll go a little further Friday night. I don’t know if we’ll try to make a full pull Friday night, because we want to sneak up a little bit [on it]. We’ve got a lot of new stuff on there and a lot of different management. We need to go a couple hundred more feet, then a couple hundred more feet before we’re ready to go all the way.

“This is the first race in my car in 10 years,” he said of this weekend’s FallNationals. “I got my license back in Terry’s [Haddock’s] car right before Houston, and I drove his car at Houston.” King qualified 14th at his home track – where he began his Top Fuel career in 2002 – and lost to fellow Texas Steve Torrence in the first round of eliminations as the engine expired.

“I brought the altered up here [to Ennis] and ran it. The Bone Bucket [his longtime fuel altered] is getting front-halved. We’re going to run it some next year, and it’ll be freshened up. And we’re going to play at some of Chris’ deals,” he said. He was talking about Chris Graves’ Funny Car and Nitro Chaos series. “We came up to the Funny Car Chaos that was here in March, and that’s where we renewed my license.”

Graves, a skilled photographer with his Max Cackle photography business – worked for King on the dragster as a teenager. Today Graves has established and built on the wildly popular Funny Car Chaos series that started into one race and has ballooned into a mega-hit that has spun off a Nitro Chaos series, too.

“Actually,” King said only half-jokingly, “he and Alex Conway were both about 15 when I took ’em on the Western Swing – and ruined them for life.” Conway, a respected fixture in the nitro pits, has worked with John Force racing but has settled in with Matt Hagan’s team at Don Schumacher Racing.

As for next year, King said, “I’m going to run two or three [races] a year. If we’re going to run a bunch of races, we’ve got to have money. The rig’s been inside the shop all this time. I did have to put some new tires all the way around it. It’s kind of my toolbox. That’s why I didn’t sell it. That was instrumental in making the decision to come back – all I really needed was a car.”

He said he’ll make one last fling at Houston Raceway Park next spring before it closes permanently, and he’ll return here to Texas Motorplex for the FallNationals. “If Chris has Nitro Chaos, we’ll run that.”

In the past few years, King has taken major financial hits from hurricanes and from the pandemic. This latest hurricane, Ida, which devastated the Gulf Coast next-door neighbors in Louisiana, spared King this time. But he said he knows how those folks feel.

This summer, he said of Ida’s destruction, “We got a little rain. It killed a day or two worth of business, but I’ve been fortunate this year so far. They had a little blow over there [in Louisiana] a month or so ago.”

By calling it “a little blow,” evidently how South Texans refer to hurricanes, King said he wasn’t trying to underestimate it. His buddy, Jim Dupuy, lives at Houma, which was hit hard. A lot of the NHRA family live in Louisiana and were severely affected by the hurricane.

“I’m sure there are people who have been homeless, and I’ve been there. I know where they’re at. When Hurricane Ike came, my business was closed for a year and I was homeless, lost everything we had. I had a house out on the water that had nine feet of water in it. The candy store [La King’s Confectionery, on The Strand promenade at Galveston] had 12 feet of water. So home now for me is out in Lagrange, Texas [between Austin and Houston]. I bought something off the island where I’d have someplace to go to escape and keep everything out of the corrosion and salt air and have a place to go be if we get wiped out again,” King said.

His business is just now starting to come back. “Summer last year was about half of what it ought to be. We were closed April and May, but since then, it’s been OK. At least I’m open, and there are a lot of ’em that aren’t. And there were a lot of businesses that were on the fence that aren’t here no more. I feel fortunate.”