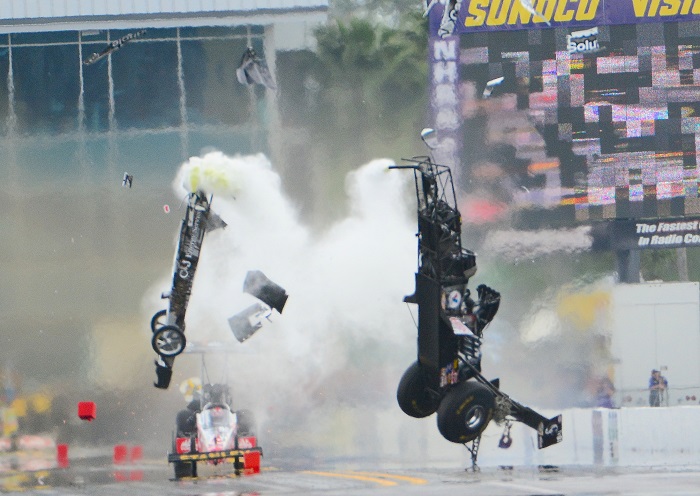 Chassis builder Murf McKinney considers himself to be just one of many drag racing fans who was horrified when he watched as Larry Dixon's Top Fuel dragster broke apart back in March 2015. The chassis buckled, breaking the car in half, sending the driver's compartment into the air high above Gainesville Raceway, and the other half also into the air before landing and sliding to a stop down track.

McKinney said to himself as he watched on in horror, "Never again."

If only someone could have heeded McKinney's words quicker.

Six months after, still with no definitive fix to the issue, Top Fuel driver Phil Lamattina suffered a nearly identical incident and, just like Dixon, suffered a back injury. Five years later, at the NHRA Midwest Nationals in St. Louis, Leah Pruett walked away from the same accident with no reported injuries.

These were the bad ones, and according to sources who spoke under anonymity, there could have been more. There have been other instances where issues were caught before they ended up like the aforementioned high-profile incidents.

As McKinney sees it, there will be more unless the chassis committee he's on, and the NHRA, doesn't come up with a new SFI chassis spec.

Back in 2015, NHRA and SFI collaborated on what should have been a definitive fix.

Initially, NHRA was not quick to decide on a "fix," citing a kneejerk reaction could do more harm than good.

Team owner Connie Kalitta stepped up with a dragster instrumented to show data of the stresses a dragster chassis endures, and the information gleaned from the tests established new parameters. There were two options established. They were to either mandate a thicker tubing or to regulate bay lengths. McKinney said Kalitta's investment in the safety study went a long way towards putting the Chassis Safety committee and NHRA on a path to solving the issue.

McKinney was a proponent of thicker tubing for the chassis' front part from the start and remains one today. One could see his point considering the cars he was building then were running almost 100 miles per hour faster, were 50 inches longer, and powered by an engine some five times stronger than the same chassis tubing thickness recommended by SFI, which dates back to the 1980s.

Until October 3, 2020, the bay length adjustment to the front appeared to keep the monster under control.

"Very extraneous conditions, the teams experienced at St. Louis," McKinney said. "The air was really good. The track was cold so it was really tight. There was a crosswind, so there were a lot of exterior things that you don't normally run across in the course of the year. And I think that all is maybe a contributor to that too, but we have to be able to provide a vehicle that can live in all those environments." 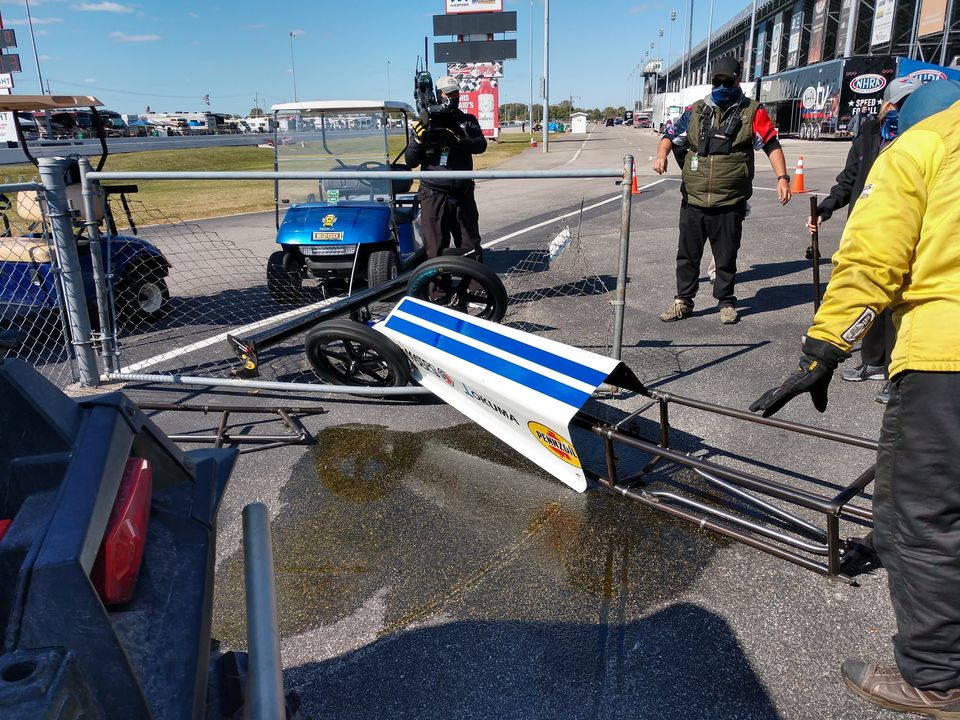 The current situation is not the first time NHRA has faced a situation when chassis failures created catastrophic accidents. In 2006, Cory McClenathan's horrific Bristol incident led NHRA to enforce a tubing size change and later phase out the use of heat-treated tubing.

Pruett's incident also presented a new situation the NHRA hadn't faced in the previous mishaps. In Dixon and Lamattina's case, the free-falling front half of the dragster remained free and clear of race fans. Pruett's car came down on the pit side stands, falling just short of the grandstands and reportedly spraying nitro on some race fans.

"Sunday it was pretty wild;  the front clip didn't know which way it wanted to go and it was headed straight towards a group of about 10 people, including myself, spewing a spray of fuel all over us just before slamming into the gate. Hell, the nitro that was sprayed on my sunglasses evaporated before I could get them off to clean them," said a race fan who was just feet away from the incident.

McKinney believes the difference between Pruett's crash and the others is that she was able to deploy the parachute minimizing potential injuries.

There have been other safety features implemented into some of the Top Fuel cars, including thicker tubing, more bars, and some creative innovations designed to prevent what happened to the bucking race cars.

For instance, when Lamattina returned to racing last season, he did so with a critical feature on his Morgan Lucas Racing-built dragster. It features electrical cables on the channel rail from the footbox down. Each upright has a plug (16-18 in total), which connects to the burst panel system and automatically shuts the engine off and pulls the parachute if an upright cracks.

As for Pruett's car, it will have a similar fail-safe procedure in place during this weekend's NHRA FallNationals.

"They're going to take and run a cable from the front half of the car, into the cockpit, to the parachute lever," McKinney explained. "So, if it ever happens again, it will automatically deploy the parachute, which I think is a wonderful idea. And all the fail-safes that we have, it's the old adage, tell me how you're going to crash, we'll tell you how to build the car. We'll put all the fail-safes that we have today. That's one area that isn't covered."

Back in 2015, drag racing faced an issue where Top Fuel cars were buckling, and breaking apart. Two prominent drivers sustained back injuries, forcing one into a retirement. Here's a look back into the https://t.co/Reh86n8GFm archives. #DragRacingNews pic.twitter.com/rfcH6sPTRq

"I think that's coming," McKinney said. "I think that maybe they had a sense of security that was taken away after Leah's incident that now more people are on board with the thicker tubing going to .058 tube. Regardless, whether it's design material, track additions, regardless of all of that, the .058 tube is 13 or 18 percent stronger than the .049 tube. So just by switching to that, you're going to get a little better margin of safety."

The little margin of safety, as McKinney believes, could go a long way if implemented.

But, as McKinney, who serves on the NHRA's chassis safety committee, points out, he is only one voice in the process.

"They say those that forget history are condemned to repeat it," McKinney explained. "It's not a one-off situation; if it happened once, it will happen again. And keep doing the same thing is not the right thing to do. But I think they're [NHRA] on board. They're in a very difficult situation in the times that we're in, having to mandate the teams make big changes with the number of races and the purse size and the lack of sponsorships. They're in a bad position right now, trying to make something like that happen."

The 2021 NHRA season has been pushed over until March, leaving teams roughly 13 weeks to make any adjustments to potential rule changes might present.

"The committee and the sanctuary bodies need to look at it really close and get something out there sooner rather than later so everybody's got time to do whatever is going to have to happen," McKinney said. And for Larry Dixon, who plans to return to competition soon behind the wheel of a Top Fuel dragster, he hopes those in charge do the right thing with driver safety in mind. He notes following Eric Medlen's crash, where the driver later succumbed to his injuries, NHRA rapidly changed the configuration of the age-old Funny Car chassis design. "It'd be nice if we didn't have something catastrophic happen to somebody before a rule change, but let's make an update without having it in the memory of somebody's name," Dixon said.