LONG BEFORE PRO NITROUS, JAY COX WAS A BASEBALL STAR IN THE MAKING 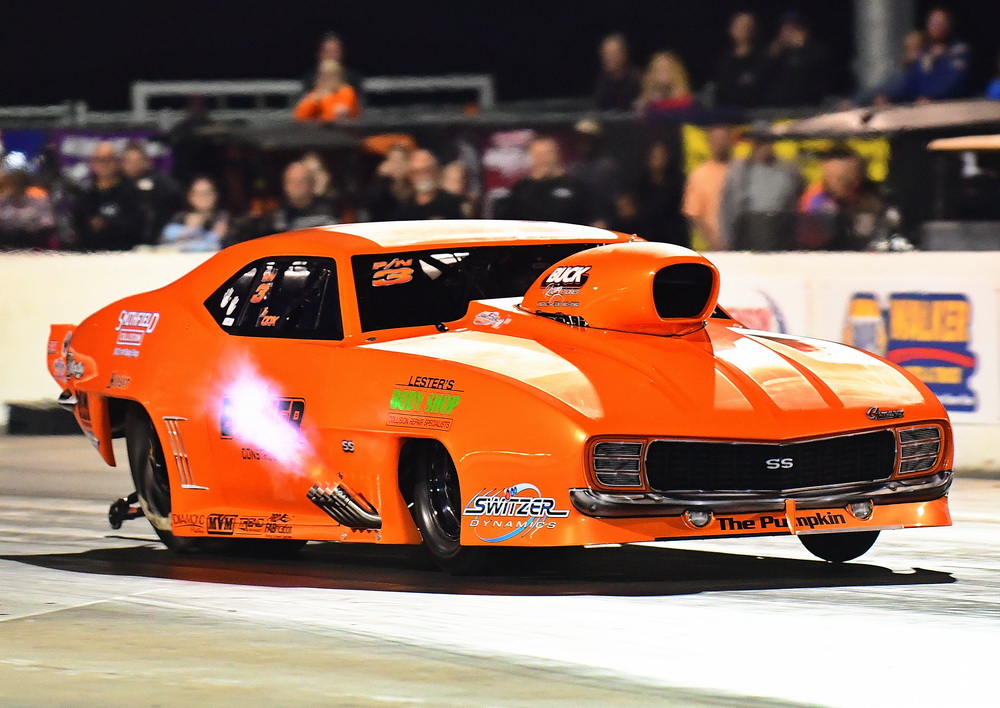 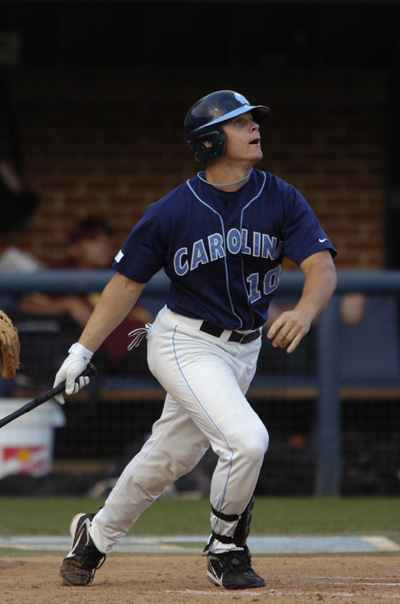 As a professional drag racer, Jay Cox is accustomed to swinging for the fences, always in search of producing a big, winning number.

That’s the same approach that made him a stellar college baseball player who spent more than five seasons getting paid to play the game of his youth.

“It’s kind of cool to look back now at all the things I got to do playing pro ball, and all the things I experienced with my family and friends and all the people I got to meet,” said the 35-year-old Smithfield, N.C., native. “I try to take that mindset now. I went out first round at Darlington and I hate not doing well. I feel like I’m the best and work the hardest, and I kind of get bummed out and down.

“But I try to recognize how fortunate I am and to have a positive attitude.”

Cox, the runner-up for the PDRA Pro Nitrous championship in 2016-17, was a standout on the basepaths before he went big-time on the dragstrip. He discovered early that refusing to take “no” for an answer would be crucial to his success.

Cox played football and basketball as a youth but “fell in love” with baseball. He “almost didn’t make” his 15-man middle school team in the seventh grade, but the coach kept him on as a 16th player with the admonition “I hope I don’t have any problems out of you.”

That kind of near-rejection “sparked something” inside of Cox.

“It hit me wrong. Anytime anybody told me I couldn't do something, it made me want to prove them wrong,” Cox said. “A little time went by, and one day I told him, ‘Man, one day I’ll be the best baseball player you ever coached.’ ”

Eventually he would prove that statement true, though it wasn’t the case at t time. Cox had good hands but no stick, and the coach actually used his designated hitter in Cox’s slot in the lineup rather than the pitcher.

“I got really serious about baseball after that. I went at it crazy. I practiced all the time, played all the time, I just wanted to be the best at it,” he said. “I played American Legion, I played Smithfield rec -- I played with about every team that you can think of around here.”

All that time spent on the diamond paid dividends. By the time he was 16, he’d been seen playing in a tournament in Florida by the Harris Rangers, a travel team out of Manassas, Va. He spent several months with the Rangers, playing all over the country, and the team eventually won the Continental Amateur Baseball Association World Series for the 16-and-under age group. Cox was chosen the Most Valuable Hitter of the CABA season.

It wasn’t long before college recruiters were showing up at Smithfield-Selma High games. Duke, N.C. State, Virginia, Virginia Tech, Miami, South Carolina and Clemson were among the NCAA Div. I schools who pursued him, as did North Carolina.

The Tar Heels weren’t high on Cox’s list until he made a visit to Chapel Hill. He felt and saw all he needed to see, and made the decision to sign with UNC as a junior.

“I went to Carolina and there were a bunch of guys I had played with or against. A bunch had already signed with Carolina,” Cox said. “I got to thinking, ‘I’m kind of a homebody, it’s only 45 minutes from my house so all my family and friends could come to the games.’ It just felt like a perfect match.”

There was no guarantee of playing time from coach Mike Fox at UNC, where Cox had been recruited to play third base. He performed very well as a freshman in the team’s fall schedule, batting more than .400, but a later meeting with Fox left him a bit dispirited -- temporarily.

“He told me Sammy Hewitt was back (from injury) and was going to play third. He said, ‘I really don’t know what to do with you. You’ve got a lot of talent and you can hit real good,’ ” Cox said. “I knew I could play college ball. I had played against those guys all fall, I could hit, I could do it all. I went back a week early over Christmas break and told Fox, ‘Look, man, I’m gonna play somewhere, even if I’ve got to take your job in the third base coach’s box. You find me a place, I’m gonna play somewhere on this team. I’ll be ready.’ ”

Before the team’s third game of the season, against Seton Hall, Fox approached Cox, handed him a new outfielder’s glove and asked if he had ever played there. 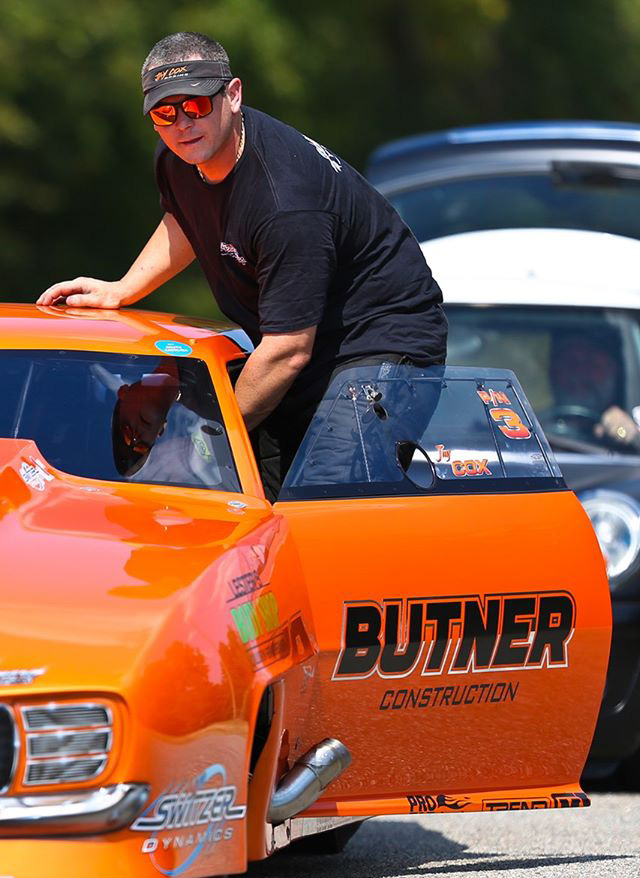 Cox responded by going 3-for-4 and driving in three runs.

Cox finished the season batting .329 and returned as a sophomore to hit .326. He helped lead the Tar Heels to the College World Series in 2006 with a .375 batting average that earned him first-team All-Atlantic Coast Conference honors.

He played a key role in UNC’s march to the best-of-three championship series. UNC advanced to the title round with a 6-5 victory over Cal State-Fullerton in which Cox was the star with two home runs, four runs batted in and a crucial ninth-inning catch.

“They had a right-handed pitcher (Wes Roemer) that we’d beaten earlier in the tournament,” Cox recalled of a pair of games against the Titans. “He had a really good change-up, and every time he’d get in trouble, he’d go to that change-up. It just so happened that when I faced him, I faced him in a situation where he was in trouble. I knew that was his go-to pitch, and I sat on it because it was nice and flat.”

Cox’s three-run, third-inning blast was followed by a solo home run gave UNC a 4-2 lead. The Titans had trimmed the margin to 4-3 when Cox came up to face Roemer in the fifth, and their duel produced a similar result.

“He fell behind, and I knew he had to go back to a pitch he was comfortable with. He went back to the change-up, and I was sitting on it. Baseball’s funny like that. You study it hard enough, you find out these guys have got patterns, and if you’re in the right situation usually you can anticipate a pitch or sit on a pitch and have a lot of success with it.”

UNC lost to Oregon State in the series-deciding Game 3, and Cox turned his attention to the Colorado Rockies, who had drafted him in the 22nd round a week before the CWS got underway. The team considered taking him in the ninth round, but when they discussed a signing bonus, Cox balked at what he felt was a lowball number. But when the Rockies took him later in the draft and offered him $100,000 to sign, he agreed. He left a program that had won 140 games in the three seasons he was a player.

“My dream was to play pro ball, so I kind of jumped at the opportunity,” Cox said. “Looking back, my college experience was probably the best experience I’d ever had in my entire life. I don’t regret leaving a year early, but I’d have loved to gone back and played that senior year and gone back to Omaha.

“The only problem with baseball is if you play that senior, you’re limited to what they’ll offer when you’re drafted since you don’t have any options at that point. If I had waited, I might’ve only gotten $30,000. Me, being an old country boy, we live a good life, but we ain’t very wealthy. My mom and dad get up every morning and work. A hundred thousand is a lot of money, and it allowed me to play pro ball as long as I did. You don’t make a lot in the minor leagues. I’d have been better off having a job at McDonald’s than playing ball.”

After signing, Cox played in a short-season rookie league in Casper, Wyo. The next year, 2007, he spent the full season with the Asheville (N.C.) Tourists of the South Atlantic League, then was promoted to the Rockies’ high Class-A team in Modesto, Calif., for 2008 The Rockies sent him back to Modesto in ’09, and he produced his best numbers as a member of the Colorado organization: A .294 batting average, 51 RBIs and a .474 slugging percentage.

Even so, his run with the team came to an end in 2010 spring training.

“A lot of people don’t realize this, but you have to get with an organization that you kind of fit with,” he said. “The Rockies are mostly California people. I’m a Johnston County country boy. I just didn’t gel with all them guys. I’d have been better off going to the Marlins or Braves or Blue Jays. … I did really well, I just didn’t gel with them.

“I had a good spring training, but they ... had a lot of younger guys, a lot of Dominicans, and they asked me what I wanted to do, go back to California or be released. I said, ‘I have no problem going back to California if you think there’s a chance for me to move up,’ and they just said there wasn’t any room,” he said.

“It wasn’t my decision. They released me hoping I’d get picked up by somebody else and move up, but it just didn’t happen.” 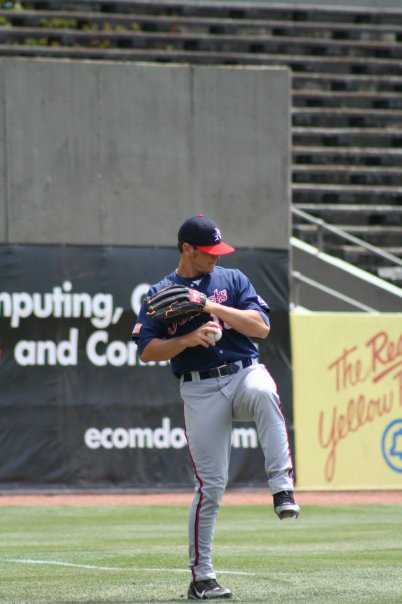 Instead, he signed with Fargo-Moorhead of the independent Northern League and virtually duplicated his numbers from a year earlier. Then, 11 games into the 2011 season, he decided to pack it in and go home to North Carolina.

It was at that point that Cox went back to drag racing. He’d been a bracket racer as a teen and had done some Top Sportsman racing. With his father Lloyd accompanying him, Cox began competing in a heads-up Renegades Series at Piedmont Dragway near Greensboro, N.C., and it wasn’t long before his pursuits led him to PDRA’s Pro Nitrous action.

His familiar orange ‘69 Camaro, dubbed “The Pumpkin,” is equipped with a 950-dcubic-inch powerplant from Buck Racing Engines. So far in 2020, Cox’s best outings have resulted in a $25,000 U.S. Street Nationals victory at Bradenton, Fla., and a semifinal showing in the PDRA’s season opener at his home track, GALOT Motorsports Park in Benson, N.C.

Cox’s car is primarily sponsored by Butner Construction, a large commercial builder located only a mile from the Buck shop in King, N.C., as well as Smithfield Collision and Lester’s Body Shop of Covington, La.

“This class is really, really competitive,” Cox said. “We’re trying to get back to the top. We’re stuck in the 3-4 spot right now and trying to get back to the top. Only a few hundreths separate us, but it’s a lot of money and time to get there. It takes a lot of money to do this and a large group of people. Without them, I couldn’t do what I do.”

Cox plans to race as long as there’s sponsorship to pay the majority of the expense involved. He’s in the process of buying his father’s towing company and automotive repair business, and that will be his primary focus whenever his sports career ends.

“Like my dad said, at some point I'm going to look back and see how I had it made; how fortunate I was to have done all the things I’ve done,” he said. “I look back now and I think how awesome it was to play with all the different people I did. I watch the Major League games and there are 30-40 guys I played with that’re in the big leagues.

“I try not to ever take racing for granted. I try to enjoy it and have a smile on my face, even when I’m not winning, but at the same time it’s hard because outside of my family, there’s nothing I love more than racing and a drag car.”