MARONEY LOOKING AHEAD TO NEXT TOP FUEL OUTING 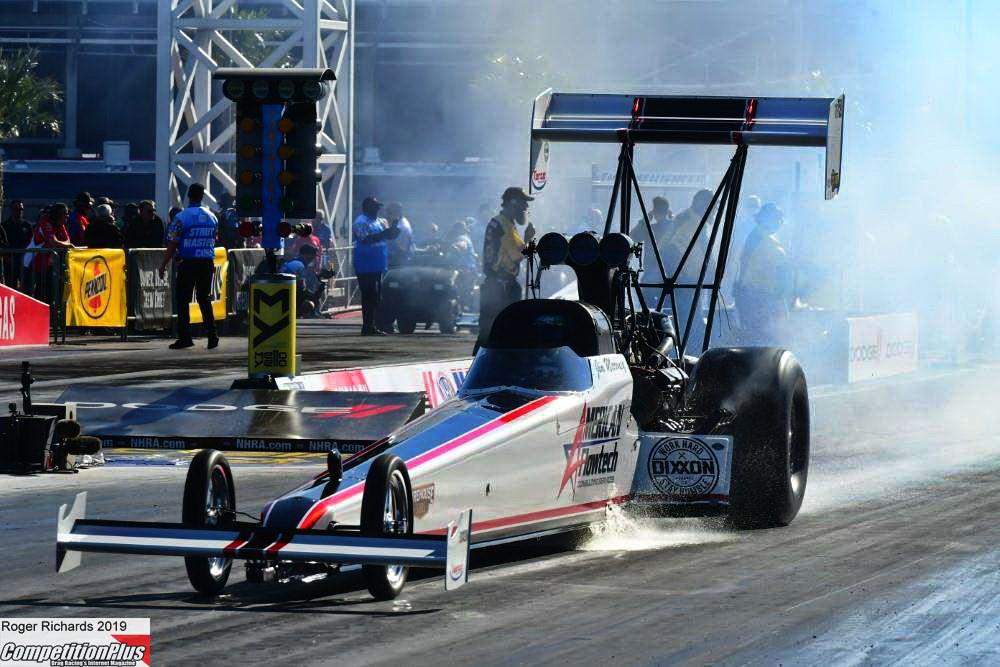 Score it a rough “welcome back” for Jim Maroney, who rolled through the gates last week to debut his own team and his Morgan Lucas-built American Flowtech Dragster.

The 26-year veteran from Gilbert, Ariz., with a successful resume in the Western Fuel Altered series has raced most recently with Terry Haddock and Kim Davidson.

But he said, “Throughout my career, I’ve always been my own owner and tuner and made my own decisions. After having partnered up and having rented other Top Fuel teams, to rent someone else’s car and to not have that control how money is being spent or how the car ran the way it did, it was time to do my own thing. Going into this, not being on a multi-million-dollar budget, the whole idea of putting this team together is to put together the best people, the best parts that we can afford, and to make sure the car is as perfect as we can make it. Part of that process is to have Johnny West and Eric Lane on board to sort through those things.”

They have a few glitches to sort through after four disappointing qualifying attempts. But their extensive experience no doubt will overcome those mechanical gremlins as they all gel as a team. And Maroney, focusing on his many positives from the weekend, already is looking to his next appearance, in two weeks at the season finale at Pomona: “We will definitely be in Pomona, and hopefully we can progress from where we are today.”

In the new team’s debut, the car leaked fuel during the burnout because of a fuel-line parts failure. So he sat out his first opportunity.

After the crew pushed the car from the starting line and as the Safety Safari crew cleaned up the spill, Maroney said, “You know, we have done everything we can to make sure we’ve done everything right. That was a brand-new, crimped, pressure-tested line that came apart. All you can do is trust the tools around you, and in this case, it came back to bite us. Better at the burnout than at the hit. We’ll be back. Absolutely. We’ll see you on Sunday, let’s put it that way.”

Later, he said, “First hit in the car at this point and looking at the computer compared to other cars, we were really close. We just need to fine-tune it a little more and we will be right there. The engine is extremely happy, which is good for a new combination. We just missed by that much. For the first hit in the car, I’m real excited.”

In the second qualifying session, the car launched well but the tires shook loose, causing Maroney to abort the run. Saturday’s performance was disappointing, as in both Saturday sessions ended immediately in tire smoke and early shutoffs. In the final session, the blower belt broke.

“Everything went smooth. The burnout went smooth,” Maroney said Saturday. “All the previous problems we had the previous pass were cleared up. It left the line hard, cut a good light, the car reacted like it was supposed to, but the blower belt wasn’t in for the ride. It was a brand-new blower belt, and she didn’t like it. She broke the blower belt about 100 foot out. It looks like we are done for the weekend. In general, I’m extremely happy with the team who are a bunch of volunteer guys. We’ve got the big teams asking who my crew guys are. We are a bunch of nostalgia racers who came together who wanted to do this. Eric Lane has been a huge asset this weekend.

“We actually made huge progress. It may not have looked like it,” he said. “If we weren’t a team of volunteer guys, we would stay and test on Monday. But everyone has to be back to work on Monday. I just wish we could’ve made the show tomorrow for Torco, Dixxon Flannels, Firehouse Subs, and the rest of the companies who have been giving us a hand.”

Lane, who most recently worked with Bob Tasca’s Funny Car team, will call the tuning shots with West’s assistance.

Billy Torrence is 61 years old. Brandon Welch is 36. But Torrence is a fellow Top Fuel team owner and driver Welch can relate to. - CLICK ON LINK BELOW TO READ FULL STORY - #DragRacingNews #nhra - https://t.co/Mo4K0ek4KS pic.twitter.com/KD4F14xH1R