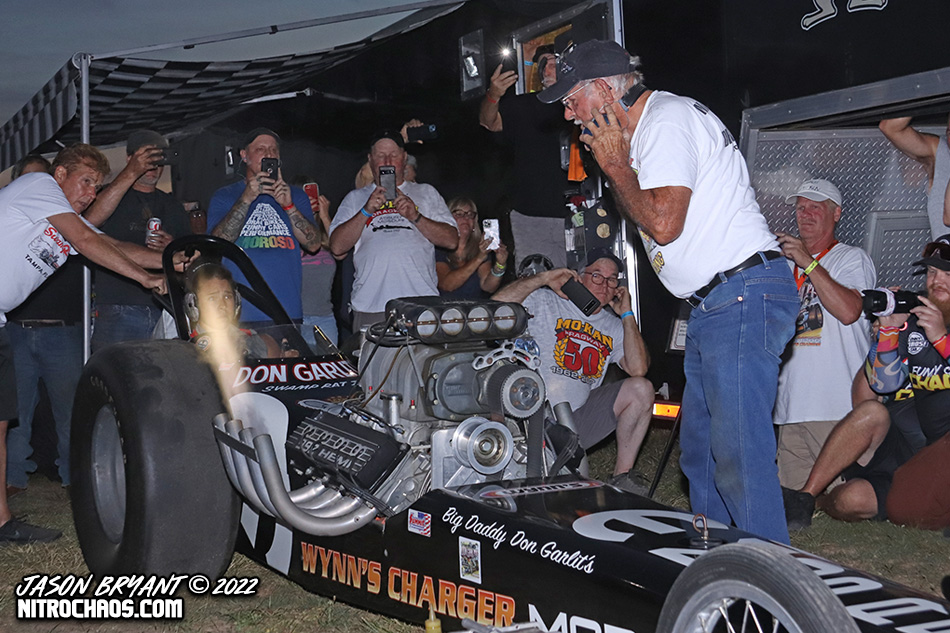 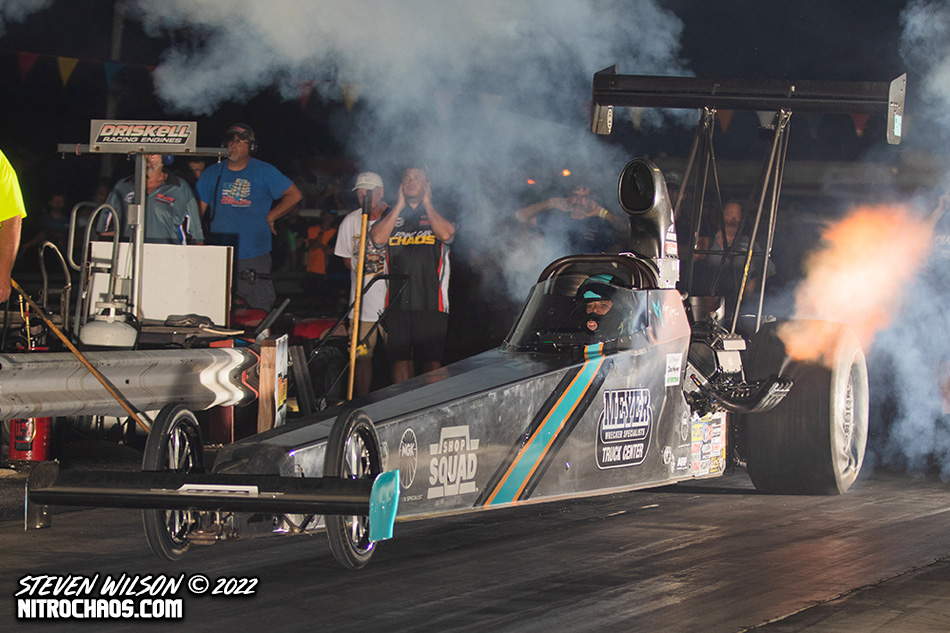 Meyer took home top honors in the "A" Field at the recently-completed Nitro Chaos event at the legendary Mo-Kan Dragway, a facility named for its proximity to the Missouri-Kansas state line. Joining Meyer in the winner's circle was Dave Gallegos, who took home the "B" Field honors.

Dave Gallegos joined Meyer in the winner's circle, taking home the trophy in 'B' Field at Mo-Kan Dagway's 60th-anniversary celebration.

After stepping away from the driver's seat at the end of the 2020 season, it didn't take long for two-time NHRA Top Alcohol Dragster Champion Megan Meyer to reacclimate herself to the Randy Meyer Racing Top Alcohol Dragster cockpit. But, it was no walk in the park. Meyer, who entered eliminations seeded No. 2, defeated Mark Hunter's "Jailbreak" AA/Fuel Altered in the opening round with a stout 3.677 elapsed time at 216 miles per hour. The victory lined her up with the quickest and fastest Fuel Altered on the planet, Kebin Kinsley. 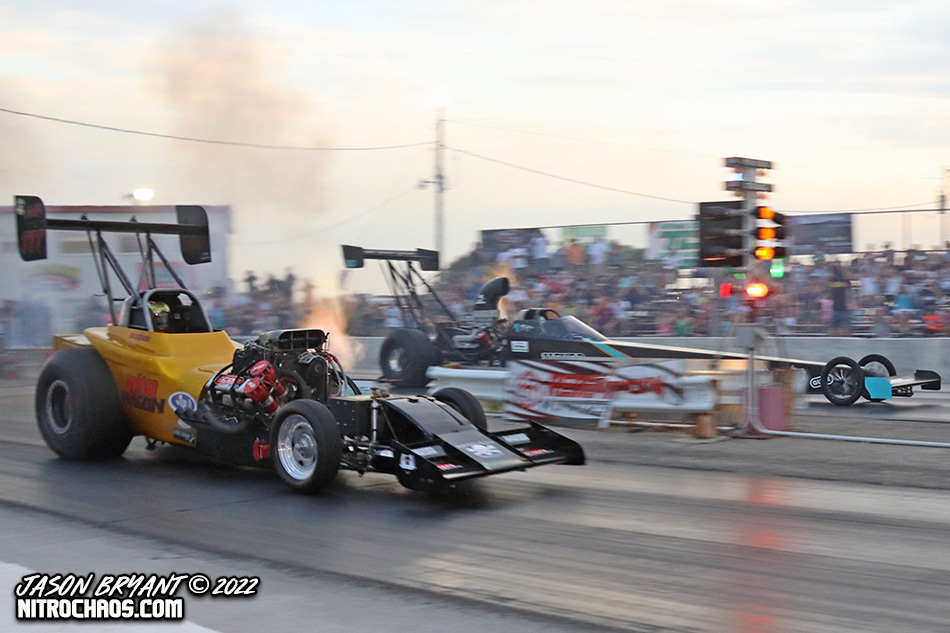 Kinsley had lane choice, having set both ends of the Mo-Kan Dragway track record with a blistering 3.559 second elapsed time at over 222.88 miles per hour. Kinsley stepped up his torrid pace against Meyer, running an even better 3.547 elapsed time at 225.45 miles per hour. It was for naught as Kinsley fouled, handing Meyer the round win and a trip into the final round. Meyer also stepped up her game, running a fantastic 3.576 at 220 miles per hour against Kinsley, giving her lane choice in the final round.

It was an all-Randy Meyer Racing final as Meyer would square off against her teammate Julie Nataas.

Nataas, who qualified on the pole, defeated Nick Poloson in round one and Jody Austin in the semifinals to clinch her berth into the final round. Under the lights at Mo-Kan Dragway with the money and trophy on the line, Nataas smoked the tires at the hit as Meyer, who was in the left lane all day, streaked away with her best time of the day, running an outstanding 3.561 at 221 miles per hour to take the win in 'A' Field at Nitro Chaos. 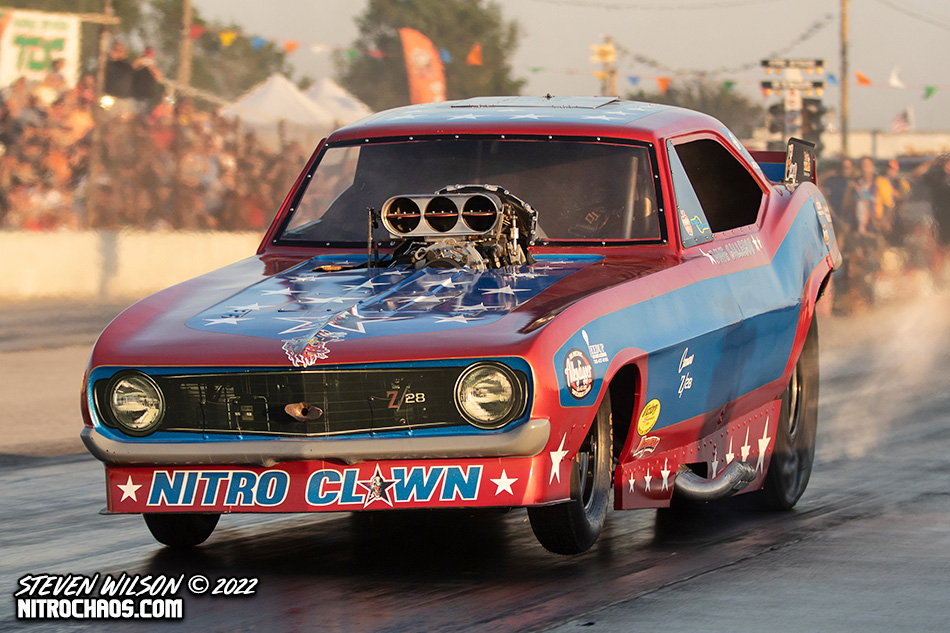 "Man, this car is deadly consistent, way more consistent than my super comp car was ever racing here," Meyer said. "This is the first time I've ever actually won at Mo-Kan. I didn't want to jinx myself, and I didn't want to say anything early, but man, what a day. It's late, but there are so many awesome fans that have come out today, so many alumni and locals that remember me from racing juniors here and super comp with my sister.

"My heart is so full, and of course, having Henry here and my husband Adam, it's just been so cool. My dad and my guys work so hard through the heat; they did such an awesome job on both cars, and so proud of them; they deserve this."

Local favorite Dave Gallegos, driver of the "Nitro Clown" Z/28 Chevy Camaro Nitro Funny Car, took care of business in the "B" Field against Scott Dominguez in the opening round and then Gary Wheeler in the semifinals to advance into the final round.

"When this thing happens, it's magic," Gallegos said. "Got my family to thank, my friends, all the people that help us out and sponsor us. This is just the beginning. We're going to try and make a run and terrorize this circuit and be a threat wherever we go. Thanks to Chris Graves, Terra Graves, Mo-Kan Dragway, and Mr. Blanton. Kansas has done it, and we're on the map, thank you." 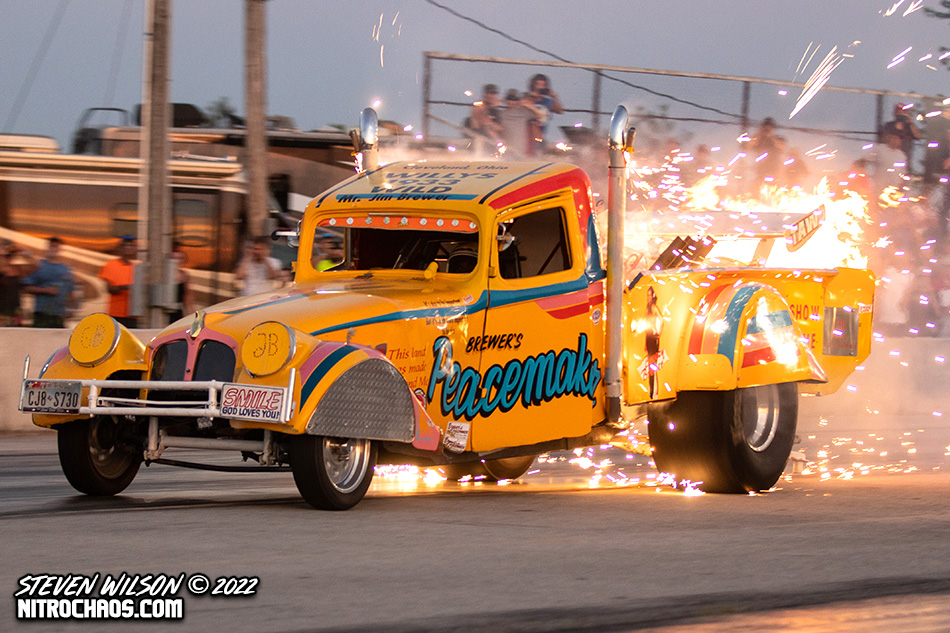 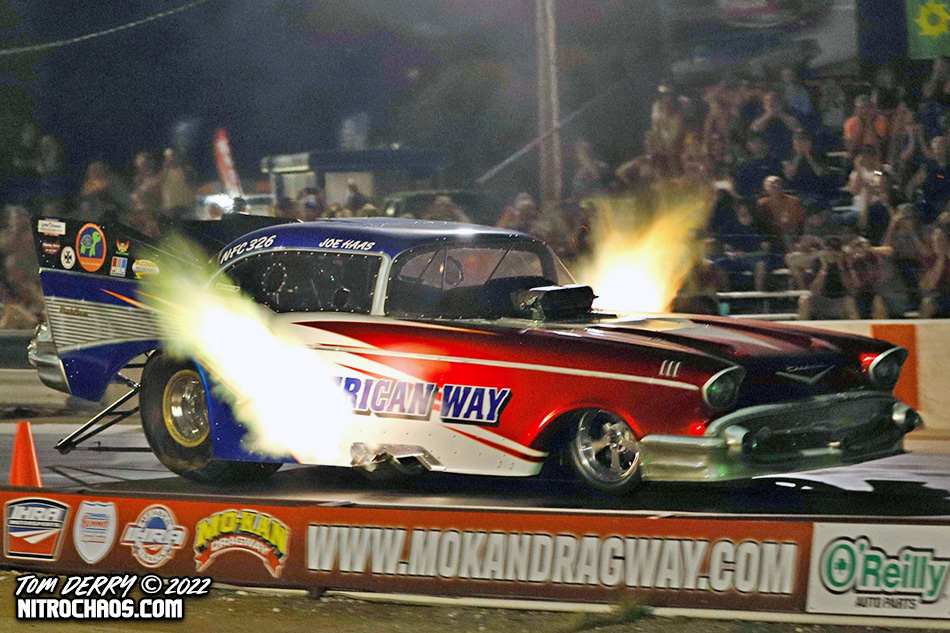