"We were going to build another Radials vs. the World car because at the time we started the deal the rules kind of leaned in favor of the blower deal, but then Keith talked to me about converting his old "Enigma" Camaro from RVW to Pro Mod and it just seemed like the right time to make a change and try something new," explains Mills, who won Pro Drag Radial at the 2016 U.S. Street Nats with his original "Golden Gorilla" '68 Camaro.

"You know, Enigma always ran on nitrous with me, but it was built with a wheelbase to handle a twin-turbo or Procharger or screw-blower combo, so we're excited to see the way things go with this new screw motor," Haney adds. "And Dewayne's always been a twin-turbo guy and I've always been a nitrous guy, but we both wanted to try something different this time, shake things up a bit." 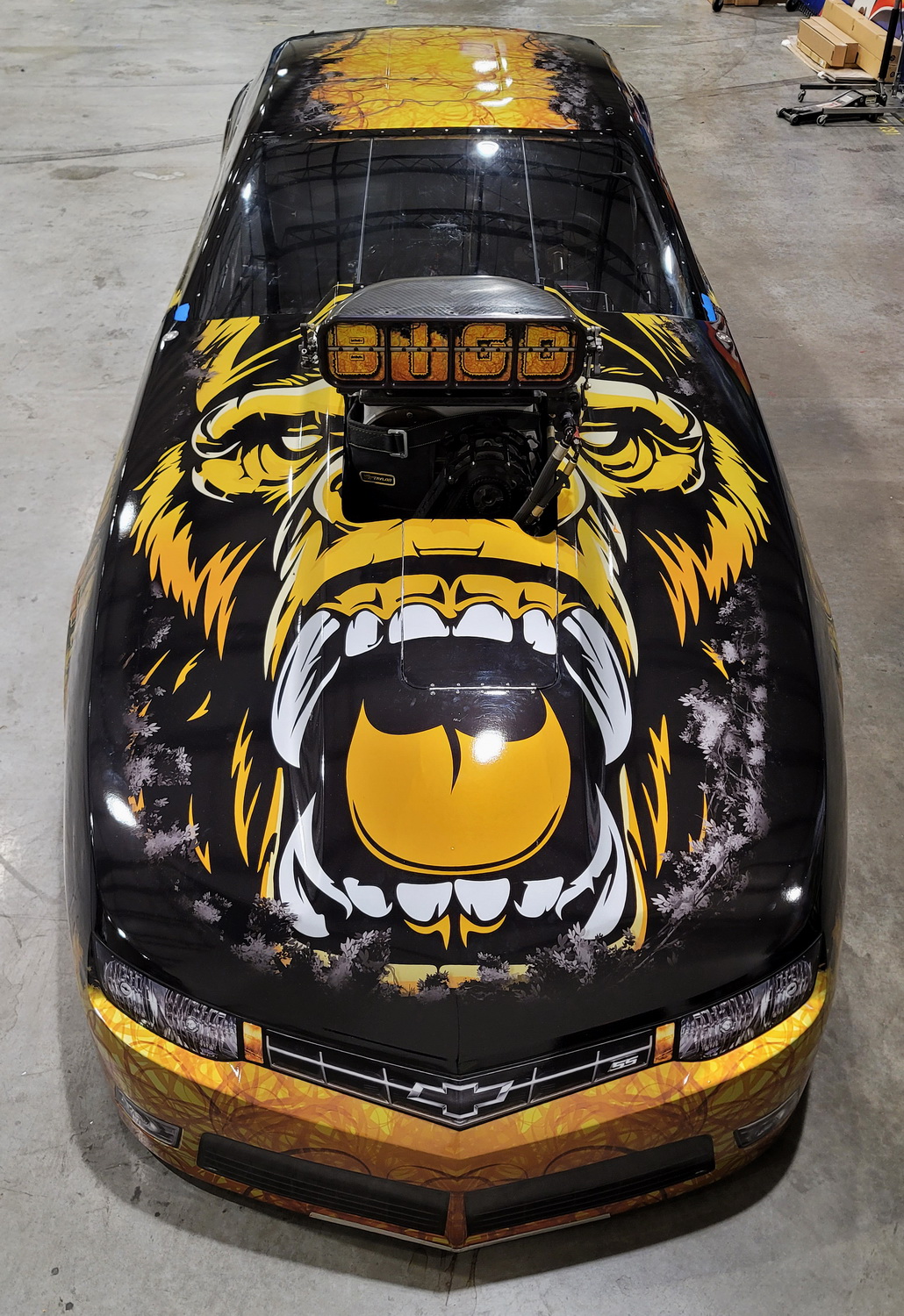 "It actually was my third time with cancer in about five years," he reveals. "I had a carcinoid on my appendix, so they took it out, and then they found a thyroid cancer and took that out within six to eight months of the appendix. So then I had to do some radiation and just when I was healing up and getting back to business, we had this prostate deal fire up about two years later. So I don't know, it kind of knocked the wind out of my sails a little bit."

Mills says he and Haney had been in talks about rebuilding Enigma together since mid-2019, but late that year he suggested Haney just sell the car since he was putting his racing program on hold. Then he revealed his latest cancer scare to Haney, just a month or so before undergoing surgery late last January.

"That obviously bothered him, so when I was having my surgery, Keith loaded the car up and got a blower motor from Todd Martin and Todd put it in the car to get us started," Mills says. "He wanted to do this while I was healing up because he said, 'It's going to be too easy for you to quit racing completely if you're out of racing.' So when I got healed up enough to do stuff, we just start tinkering with it, trying to get it together."

Mills then suffered a further setback last August in Nebraska, after going through a devastating, high-speed rollover crash in the "Golden Kong" '68 Camaro that his daughter Kallee usually drives, during filming for the popular "Street Outlaws" TV show (Scheduled airdate: Jan. 11, 2021, 9 p.m. on Discovery).

"I was left bruised up from head to toe and fractured an elbow that I didn't even know about," Mills says. "And it took about two-and-a-half weeks for the world to quit spinning and for me to stop trying to throw up. Then I went back to work about three-and-a-half weeks after the accident."

Since that time Mills has been back to the track just once, testing the original Golden Gorilla over Thanksgiving weekend at Edinburg Motorsports Park in south Texas. His next outing will probably come in the next couple of weeks at Tulsa Motorsports Park, with just a few half-track shakedown runs expected for his first Pro Mod driving experience. 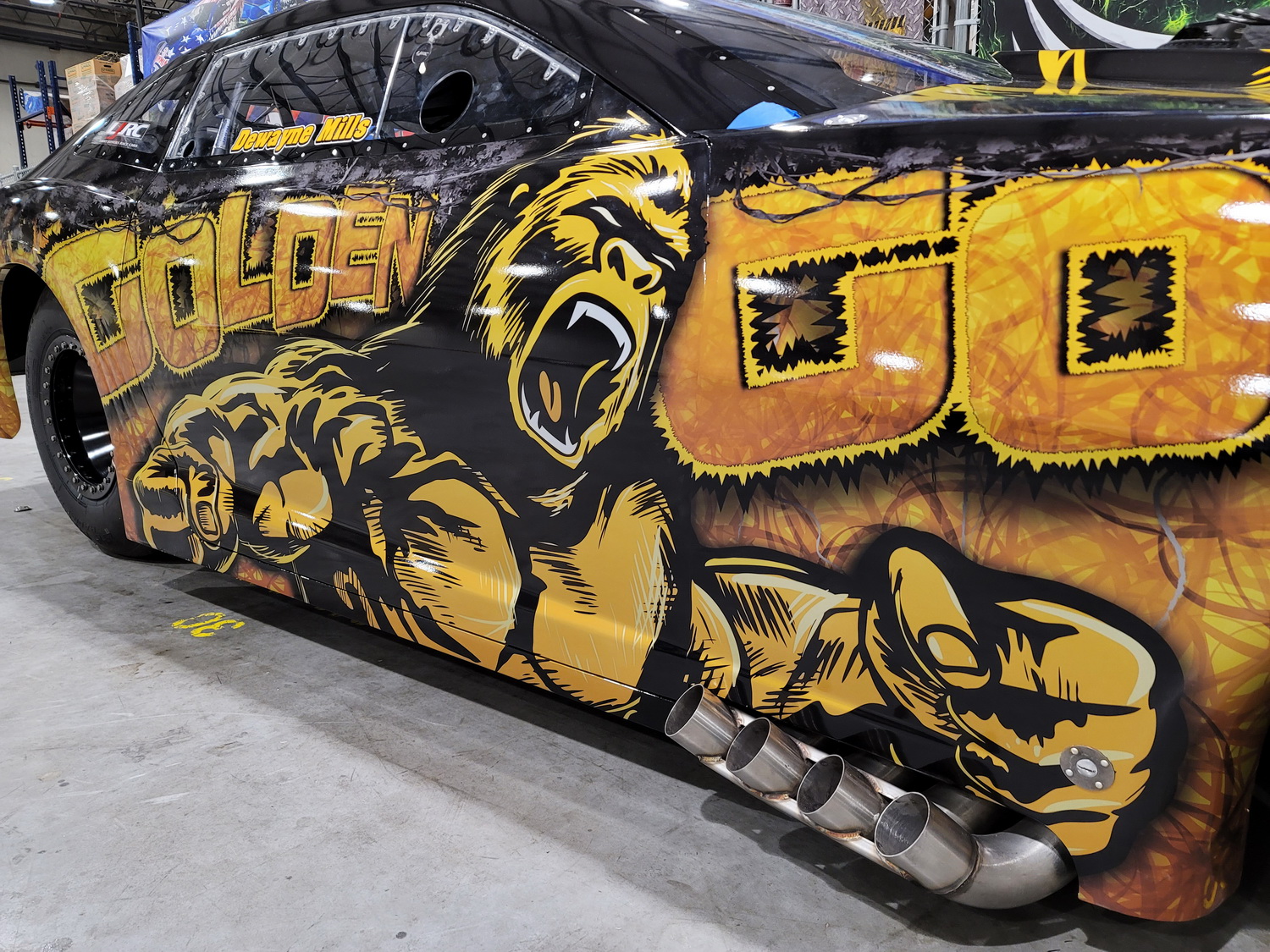 Originally built by Jeffers Race Cars, the new ride features an aggressive Golden Gorilla-themed wrap designed and applied by Kryptonite Kustomz. It carries a Brandon Pesz-built engine, with a former Q80 Racing blower bolted on top. FuelTech provides mechanical injection and all power management, with the resulting horsepower running through an M&M transmission and converter.

"You know, it's kind of a weird deal, not having a Proline engine in the thing, but I ended up starting to put together a spare motor and we bought the block and whatnot from Proline, so it's not like I'm leaving them," Mills stresses. And with so much experience and success on M/T drag radials, he also is sticking with Mickey Thompson slicks for his transition to big-tire competition. At the track, Pesz will handle the tune-up, assisted by longtime friend and tuner Jamie Miller, with additional help coming from Mills' wife and daughter, plus crew members John Maguda, Brenden Russell and John Miller.

"It's gonna' be a learning experience for all of us and I'll probably blow it up a couple of times before we get it all figured out, but it'll be good. I mean, it's something way different for me, but you know, it's something I've always had the goal of doing," Mills says.

Following the Florida U.S. Street Nationals outing later this month, Mills plans to mount a full-season campaign alongside Haney as Pro Mod teammates in the 2021 Summit Racing Mid-West Drag Racing Series (MWDRS). He assures his many loyal fans they haven't seen the last of him on the small-tire circuit, though.

"We're definitely not giving up on the steel-bodied cars," he insists. "We've got a new car being built for my daughter and it's gonna' be a real nice piece. We've still got enough cars to go around, that's for sure."