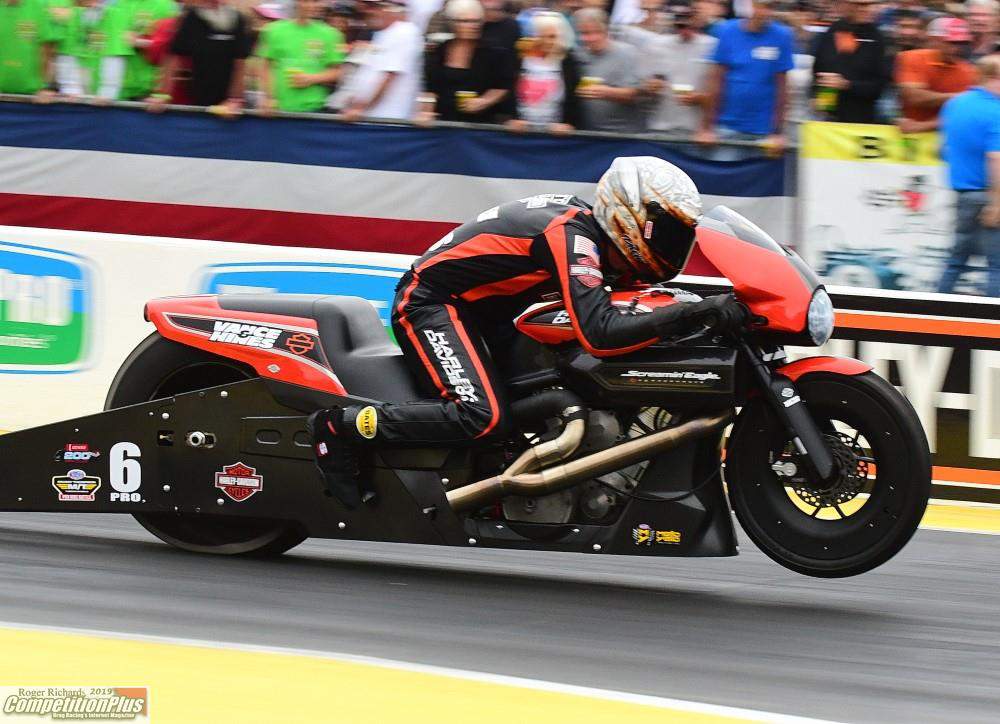 The 2018 season was one to forget for Pro Stock Motorcycle racer Andrew Hines. He finished sixth in the final points standings, his lowest result since 2013.

But what stung the most was not winning a single race. That hasn't happened since 2003, his first full-time season in NHRA.

So, yeah, Hines was a little motivated heading into 2019. He lost 10 pounds, helping shave some vital weight off his new Harley-Davidson motorcycle.

And in addition to a new chassis, the Vance & Hines team decided to install a new electronic-control unit in its Harley engines, bringing a new level of tuning.

How did it work out? Hines broke the national record, and teammate Eddie Kraweic was No. 2 in qualifying for Pro Stock Motorcycle’s season-opener, the 50th-annual Amelie Motor Oil NHRA Gatornationals on Saturday at Gainesville Raceway.

"The off-season was pretty busy," Hines said. "We had a lot of work to do around the shop, and it wasn’t just on the race motorcycles. At Vance & Hines, we also have our factory flat-track team for Harley-Davidson as well, so it was all hands on deck trying to get every race vehicle in the shop up to speed.

"Luckily, my brother Matt and Mike, my crew guy, took it under their wing to build a new chassis for me after we saw that the chassis I was riding all last year wasn't up to snuff after I jumped on a newer bike at the end of the season – which is the one Angelle (Sampey) is riding right now."

Hines said the switch to a new MoTeC ECU was "kind of a gamble" because it changed how the team tunes its bikes.

"We went testing with Eddie's bike in Phoenix when we tested Angelle back in February, and it showed a little bit of promise," Hines said. "We took the gamble to completely put it on the motorcycles, eliminate the Racepak and run everything through the ECU so we could streamline a little bit and get some of the weight off. It was an effort to take us to the next level."

During preseason testing, Hines' new bike made a 6.80-second run on its first full pass. And it got better from there.

"We ran four consecutive .70s after that in testing and then came here and ran another .75 today," Hines said. "I was hoping to go 200 (mph) today. Eddie's been knocking them off pretty regularly here lately, and it would have been nice to get that out of the way, but there's always tomorrow."

And though Hines broke the ET record, he knows it could be in danger during Sunday's eliminations.

"Setting a national ET record, those are not easy to come by," Hines said. "The last one for our class was seven years ago. It's a feat that I didn't think would be surpassed this weekend by us. The way Matt Smith's motorcycle's been running, I thought he would have a great chance of doing it. He still has a chance (tomorrow), but we'll take it right now and reap the benefits from it."