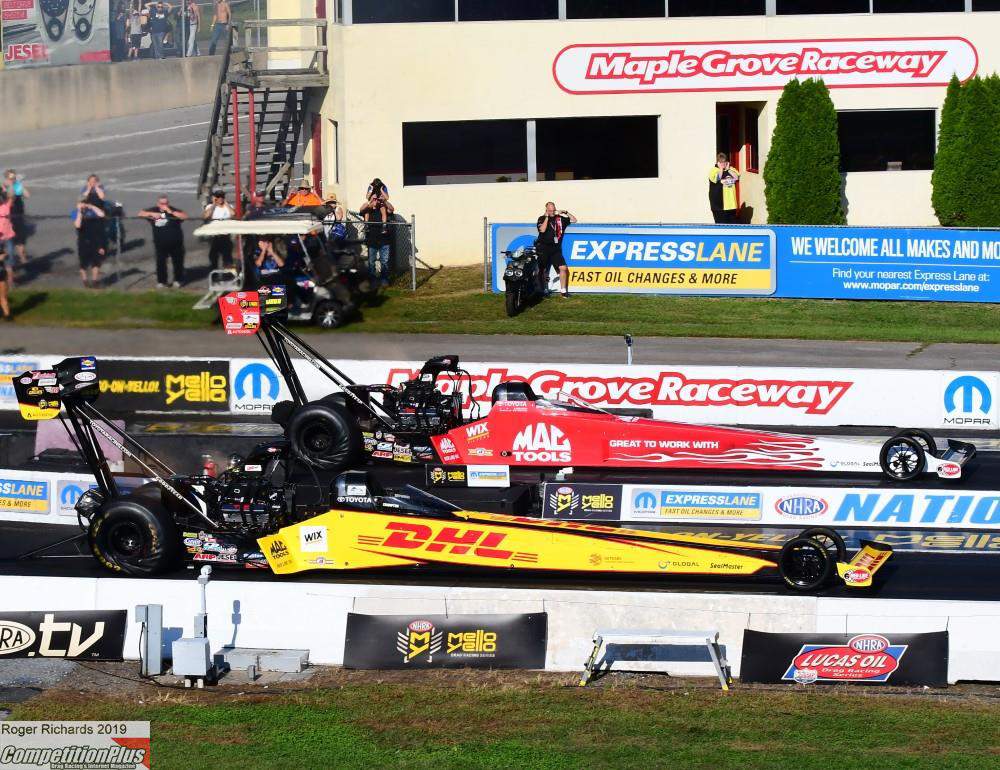 In all-Kalitta Motorsports final round Sunday at Mohnton, Pa., No. 9 Countdown qualifier Richie Crampton inserted himself into the NHRA Top Fuel title conversation.

In denying back-to-back victories for U.S. Nationals-winning teammate Doug Kalitta in the final round, Crampton used his Mopar Express Lane Nationals triumph to leap to fifth place in a playoff opener that was full of surprises. 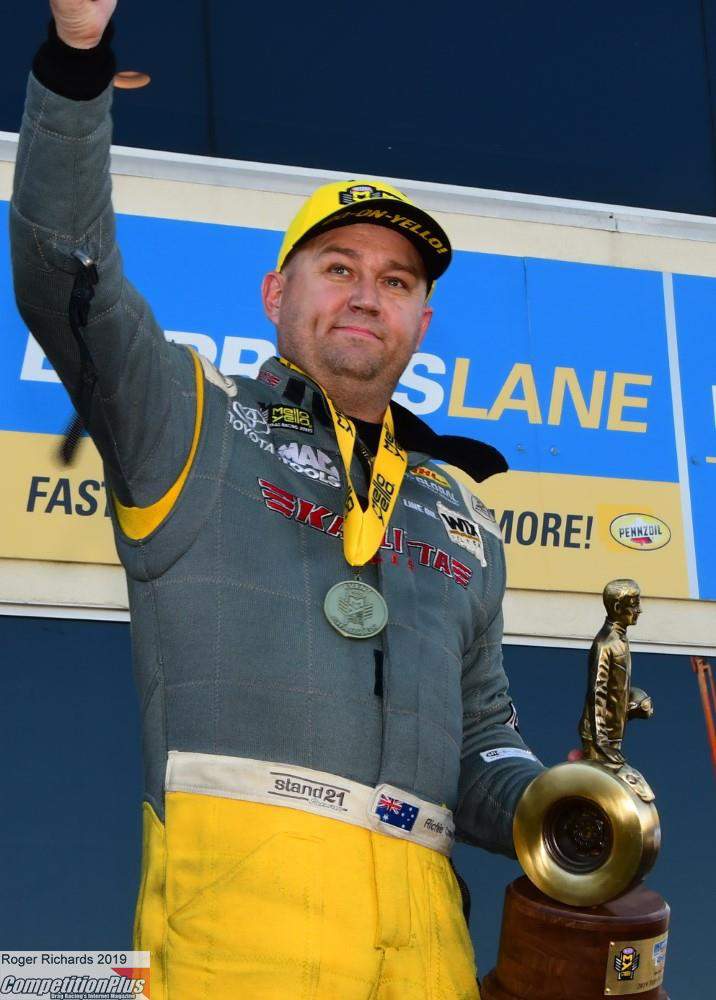 All eyes were on top qualifier Brittany Force, who clocked the quickest pass in the sport’s history Saturday, and points leader Steve Torrence, who was poised to go on another Countdown-sweep tear like he did last year. But Torrence – and his wild-card dad Billy, who ran a selective schedule, won twice, and qualified for championship contention – lost in the opening round. And Force’s car broke at the starting line in the semifinals to help set up the showdown between teammates.

That all paved the way for Gatornationals winner Crampton to be perfect in both of his final-round appearances this season and claim his first trophy on the Maple Grove Raceway 1,000-foot course.

For the DHL Dragster driver, the victory was No. 10, which tied him with his boss and crew chief, drag-racing pioneer Connie Kalitta.

“He’s one of my heroes,” Crampton said at the top end of the racetrack. “I’m so lucky to be part of this team. This is big. It’s the business time of the year. I probably didn’t deserve to win, the way I’ve been driving lately.

“I can’t believe I’ve won 10 of these races. I can’t believe I get to drive a Top Fuel dragster, coming from the middle of Australia,” he said. “To drive for Connie and to get 10 NHRA Top Fuel wins is pretty special. It’s some big shoes to fill when you’re driving for Connie and the Kalitta family and you’re Doug’s teammate. He sets the bat pretty high.” On the way to meet reporters, he said, he thought, “This hasn’t sunk in yet. I’ve been lucky to win some big races . . . now Reading. This place is pretty special. I used to watch this race on TV in Australia when I was a kid, when it would air finally.”

But Crampton does drive a dragster and he did win – and he’s just 54 points out of first place as the tour moves to suburban St. Louis Sept. 27-29 for the AAA Insurance NHRA Midwest Nationals at World Wide Technology Raceway. He’s also one single point behind No. 4-ranked Antron Brown.

Kalitta took over points lead for the first time since Steve Torrence grabbed it at Phoenix and led for the next 17-plus races. He’s 33 points ahead of Force. Torrence fell to third place – the lowest he has been in the standings since the April race at Houston.

The Torrences uncharacteristically started race day from the middle of the ladder, and the reigning class champion bowed out in the first round against close friend Clay Millican. Blanking in bonus points [for just the fifth time in four years] marked a continuation of his troubles at this facility.

“Maple Grove has been a problem for us. We’re either really good or really bad, and this year we just weren’t that good,” Torrence said, alluding to three Round 1 defeats and a failure to qualify, along with one victory and one runner-up finish, in nine appearances. “Good race with ‘Hillbiilly’ (Millican), but it didn’t go our way.  I didn’t do my job. He threw a .047 light at us, but that’s what you get when you’ve got that big No. 1 on your car. Big bullseye and today they hit it.  We just need to regroup and go back to doing what we do.  There’s still a lot of racing left.  At least the pressure’s off on whether we can sweep.”

The pressure, or at least the attention, has shifted to the Kalitta team.

“Our team is aware of the points, and we know the pressure is on. I just have to do my job. I feel like I have a great car right now. We ran really well in qualifying at Indy and were near the top of the sheets. So we knew we could run with anyone out there. It’s been a long season, but this is when it all counts,” Crampton said.

“We’re coming good at the right time of year. It’s all because of the hard work by the team at the track and back at the shop. It sure is nice to see a shift in that domination that Torrence has had. We didn’t want them struggle. We wanted to step up and race with them. And I think now we can,” he said. “The performance of our cars at Kalitta Motorsports has kind of where we want to be – running kind of low [3.]70s and high .60s, that’s what you’ve got to do to win. It’s going to be a long Countdown, and I expect those Torrence cars are going to come around again. We all know that. But for now, we’re just going to focus on what we can do to get to the finish line first.”

He took the victory – and what he figures will be a redoubled effort from the Torrences, Force, and Brown out of the Don Schumacher Racing organization – in stride. He took neither lightly Sunday, but at the same time, he didn’t get too wound up about either the victory or its possible short shelf life.

“I don’t even want to think about getting the big trophy at the end of the year yet,” Crampton said. “I know I’ve got a lot of work to do between now and then.” He said knowing the Maple Grove Raceway winner since 2013 has gone on to win the championship in November is “a pretty neat stat to think of. That’s pretty cool. I’s like the No. 1 on the side of my DHL Dragster. We’re peaking at the right time, but we’re not going to get carried away with it. We’ve got a lot of big races left. I know we’ve got the car to do it. It’s just got to go in the right direction for us.”

He said, “I hope this is [Doug Kalitta’s] year. If it’s not him, it’d better be me that gets the big trophy.”

“It was definitely a great day for the whole team. For Dougie to take the points lead heading out of here and we made a good jump in the points, as well . . . that’s what you need to do. It’s that time of the year. It’s time to execute on race day,” Crampton said. “[Tuners] Connie and Kurt Elliott gave me the car to do it.

“Doug’s car is running good, and no one can argue that Doug’s not one of the best out here at leaving and driving the race car. To have him as a teammate is a huge asset to me. He helps me  lot.  It was kind of odd going up [to the starting line]. It was win-win whether I was won or was runner-up. I was pretty much going to leave fifth in points and he was going to leave in the points lead, no matter who won the final. We’ve just got a great team,” he said.

With the two teams working well together, Crampton said, “hopefully, that’s a sign of more good things to come in the Countdown. We’re going to try our best. I’ve got to dig deep, drive like I know I can, and hopefully we’ll be standing around, talking about this at the next race or two,” Crampton said.

He said “leaving here with a trophy is great, but you don’t feel like you’ve earned it all day long when you have a round like that [semifinal]. But you’ve got to take ’em any way you can get ’em. Having mechanical problems is something that didn’t happen to us today, like what happened to them. It’s unfortunate, but it speaks volumes for my team that we didn’t have anything go wrong. Heck, if I could have four solo runs on race day, that would be just fine. The hot weather was the great equalizer today. Brittany did a great job in qualifying, setting the national record, but we all knew that today was going to be different [regarding weather conditions]. It worked good for us.”

Crampton beat Dan Mercier and Brown, then got a freebie into the final when the dragster of semifinal opponent Brittany Force sprang a fuel leak after the burnout. He smoked the tires right away in his solo semifinal pass. It was the perfect scenario, especially after Torrence exited early in eliminations.

“It was odd. But all know the law of averages catches up with everyone at some point. The Top Fuel field is tough, but to see the Torrences go out like that is not what anyone expected to see. I know they’re going to come back strong next [race]. Everyone is. So for now, I’m going to make the most of what we’re able to capitalize on them. Good for Team Kalitta.”

The two teammates met as the 2017 Countdown began at Charlotte – but Crampton was a blocker for Kalitta at that time. This time Kalitta was racing in his 99th career final and seeking to be perfect in three finals this season. Kalitta defeated Smax Smith, Mike Salinas, and Austin Prock to zoom up on his 100th  final. He had won the Winternationals to start the year and the U.S. Nationals to close the 18-race “regular season.” But Crampton took a 2-1 edge on him in final matches – and said he was going to enjoy that while it lasts.

Kalitta said the result was “not exactly how we wanted to finish out the day, but if we had to lose, at least it was to one of our teammates. It’s always fun to race Connie’s car in a final. It was a good race, and we ran pretty well. But Richie and the DHL guys made a really strong run. I was a little nervous in the semis, because in the first two rounds we went down the right lane, so I wasn’t sure what to expect down the left lane. But the TRD Toyota guys are out there looking at both lanes. I’m just really proud of those guys and my entire Mac Tools team.”

Dave Grubnic, crew chief for Force’s dragster, explained the problem that knocked the No. 1 qualifier from Sunday’s action: “It was leaking up at the manifold. It was through a jumper line we have on our fuel rail, and the leak was bad enough that it would have ended up pulling in front of the rear tire. It wasn’t safe to run the car, so we shut the car off. It’s just one of those things that happens. We found the leak and fired the car back up here in the pit to make sure everything was good, and it is. So we’ll be ready. for St. Louis.”