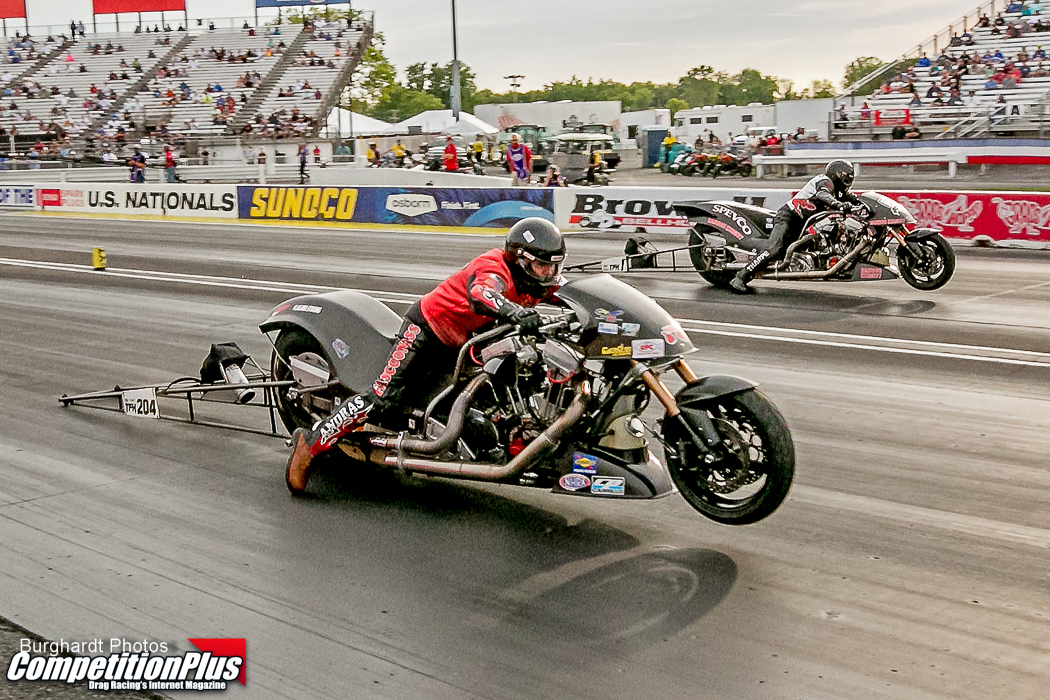 It was only a little more than a year ago that Randal Andras was ready to throw in the towel.

That all changed at the 2019 U.S. Nationals at Indianapolis -- and it sparked a fire that, for the moment, seems incapable of being extinguished.

The 58-year-old native of Amelia, La., has won five of the six NHRA Top Fuel Harley races held this season. He rolls into the Texas Motorplex this weekend for the next-to-last race of the 2020 season with the championship seemingly in the bag. All he needs to do in Ennis, Texas, is to qualify and he’ll slam the door on his closest competitor, the 2017 series champ, Jay Turner.

Should the unlikeliest scenario arise this weekend -- that Andras fail to qualify -- Turner would have to uncork a miracle. He would need to win the race from the No. 1 qualifying position, then have that scenario repeat itself Oct. 30-Nov. 1 at the Dodge NHRA Finals at Las Vegas. That idea is so far-fetched you couldn’t get any action on that from the Vegas oddsmakers.

None of this would be possible for Andras had he not rediscovered a major piece missing from his toolbox.

“When your mojo goes away, it’s a son of a gun,” Andras said Wednesday. “What happened, the confidence started coming back. The bike felt good again. We tweaked a little bit on the bike with the wheelie bars and tires, we got all that straight. The crew has done everything they possibly can, the problem couldn’t be anything else but me to ride it then.

“And had gotten so close (to recapturing the mojo) that if I couldn’t do it in ‘19, it was time for me to move on and the best years had passed me. I 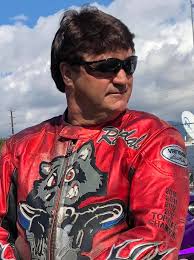 would have, but I said, ‘I’ve got to be able to do this one more time.’

‘The win at Indy gave me enough energy, and I was so fired up. I don’t know how to explain it, but it was … the thirst was there again, the butterflies was in my stomach, the ‘feel’ was all over again.”

Andras was not just a little bit late in launching his drag racing career, he was big-time tardy. He didn’t get his start on the strip until he was 38 years old, but it wasn’t for a lack of desire.

“I’d go to the tracks but I couldn’t race because I didn’t have nothing to race,” he said. “Work, kids, (business) coming up, and then it finally all came together when we bought us a little street bike and started from there.”

Andras said he began at the “very bottom” of the motorcycle drag racing ladder. He soon made a move into bikes with fuel injection and that’s when he discovered “you knew you had something to hang onto. The fun had gotten incredible,” he said.

It didn’t take long for Andras to build a personal and professional relationship with Turner, who’s based near Greensboro, N.C. By 2007, Andras had essentially turned his team over to “The Bulldog,” whose shop is currently housed in what was once the first permanent facility for NASCAR team owner (and former drag racer) Jack Roush.

It is from that shop that Turner and Andras won fistfuls of national championships with NMRA, IHRA, AHDRA -- pretty much every group that sanctioned Top Fuel Harley action.

NHRA added the class to a portion of its national-event slate in 2017, and Turner won the first championship. In 2018-19, another of the Jay Turner Racing riders, Tii Tharpe, blasted to the crowns. This year, it is a certainty that a bike out of JTR will reign supreme again, either for Turner, or, in the far more-likely scenario, Andras.

“Jay brings everything. We kinda carpool and it works out really good,” Andras said. “He takes care of the bikes, we pay him. It’s been cost-efficient and user-friendly, and it’s good for Jay because that’s what he does for a living. It’s steady work for him and it’s not a problem for me, and it’s the same with Tii and (newcomer) Chris Smith. ...

“It just has been working out really good. Jay’s a very, very well-rounded guy, y’know? He can test, he can build, he can tune, he can ride, he can diagnose -- cat’s good, man.” 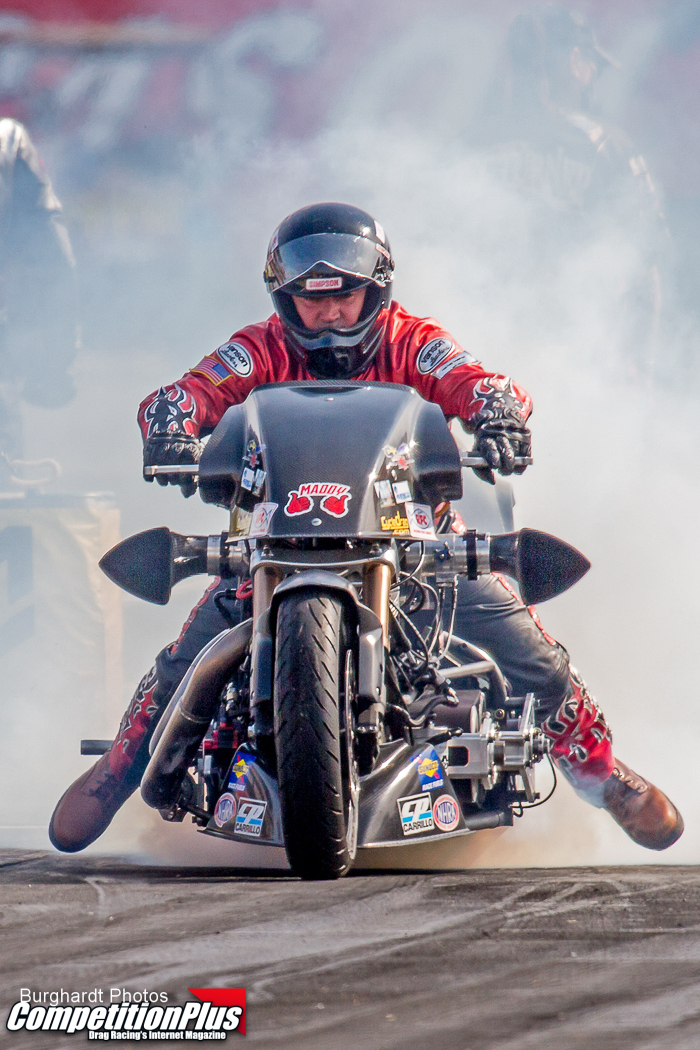 The top-tier riders on Turner-tuned equipment have thoroughly dominated the 2020 campaign, which started with Andras’ hair-raising, nail-biting victory over Tharpe at Pomona, Calif. Andras’ bike roared down the track on its rear tire, front wheel dangling in the air, well past half track. When the nose finally touched down, Andras had to do a masterful bit of steering to avoid crossing the centerline. He held on to open the season atop the points -- and he’s yet to relinquish the lead.

Then came the event at Phoenix, where Andras and Turner clashed in the semifinals. Andras qualified No. 2 at 6.297 seconds, and after securing a first-round victory, tried to tune his bike to match its qualifying performance.

“We had a good bike, and we went after it a little bit too much. Said, ‘Hey, man, we made a pass with a 29,’” he said. “We were trying to get a little better, and it spun the tire and dropped a hole (cylinder) and we shot ourself in the foot. We thought the track could take what we were putting at it. My bad.”

That would prove to be Andras’ only loss thus far. When the COVID-19 pandemic shelved racing for months and resulted in a greatly revamped schedule, the return to action put the Top Fuel Harley riders on a slate of three consecutive events at Indianapolis, capped by the U.S. Nationals.

He then rolled into Gainesville, Fla., in late September and stretched his winning streak to four national events. In the finals, he beat his new teammate, Smith, by unleashing the quickest pass of the weekend, 6.272 seconds, to thwart Smith’s 6.317.

That set up the easy path to the championship he now faces by qualifying at either of the last two events. After a couple of crashes several years ago, he had lost that priceless mojo and had begun to question whether it was too late for him to be an NHRA champ.

“We’ve always had a good bike, but I had a lot of riding issues,” he said, citing a 2016 spill at Rockingham, N.C., and another the following season at Bowling Green, Ky.

Proving just how tough Top Fuel Harley racers are, Andras suffered only scrapes -- “I got skint up” -- and “probably” two broken fingers in those top-end crashes.

“Didn’t even go to the doctor for neither one,” he said.

In fact, after the crash at Bowling Green, Andras was back on a bike -- a Pro Fuel bike that’s also nitromethane-fueled -- 35 minutes later and qualified for the next day’s eliminations. Racing on Sunday turned out to be a mistake, he said. 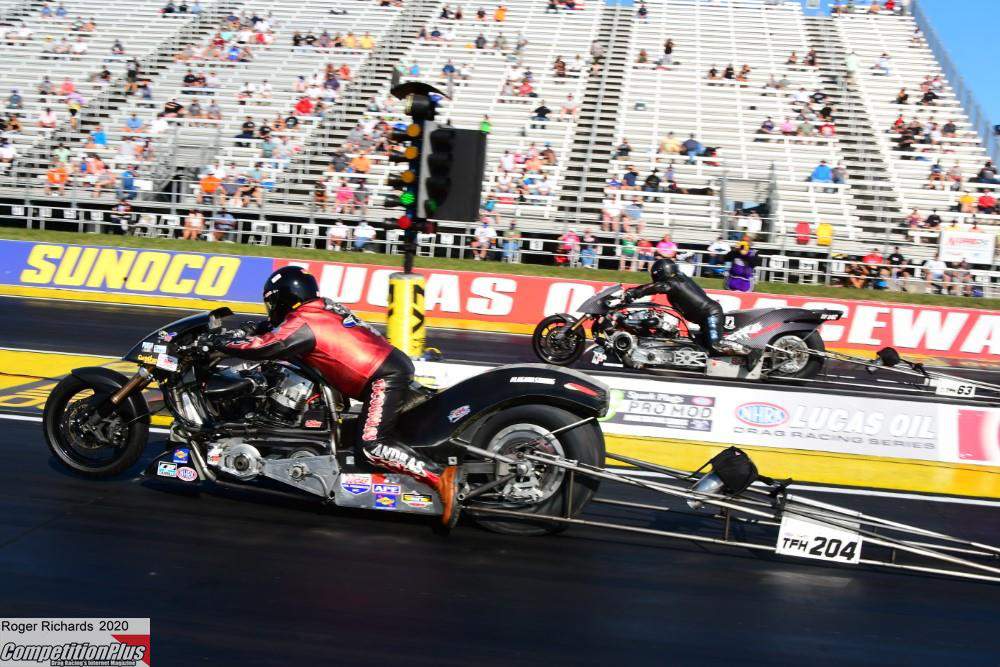 “When I got on the next day, when I hit the throttle, my hands and fingers hurted so bad, I had to turn off the throttle. It was all I could do to get it stopped at the other end,” he said. “I made a mistake. I thought I could ride, but the next day, by the time the bouncing around, flipping around, skidding on the blacktop ... it all came into play the next day and I really felt it a lot. And I said, ‘You dumbass.’ “

Those incidents had an unexpected, and most undesired, effect on Andras’ mindset; the loss of his mojo.

It was, he said, “hard for me to get it back together,” and the lack of performance was evident. It wasn’t until mid-2019 that he began to notice a 180-degree turn for the better, and it led to the AMRA Top Fuel title.

“We’d won all those Top Fuel championships already,” he said, “so the riding skills were there at one time -- and they kind of went away. I knew I was overthinking things, and it just threw me off. It was hard to get it back.

“I’ve been having a good bike for awhile ... but everything started coming around in ‘19. Then ‘20 we just opened up, we got our mojo back, we got our riding skills back, and the bike was there. Those boys that work on the bike had done everything possible. It was either me ride it or get off it -- and we was there, y’know?”

Andras’ recharged state has led him to the cusp of an NHRA championship, so much so that he can’t wait to leave his three businesses -- K & K Marine, Prime Coatings, AB Steel -- behind to get to the track for more of his good thing.