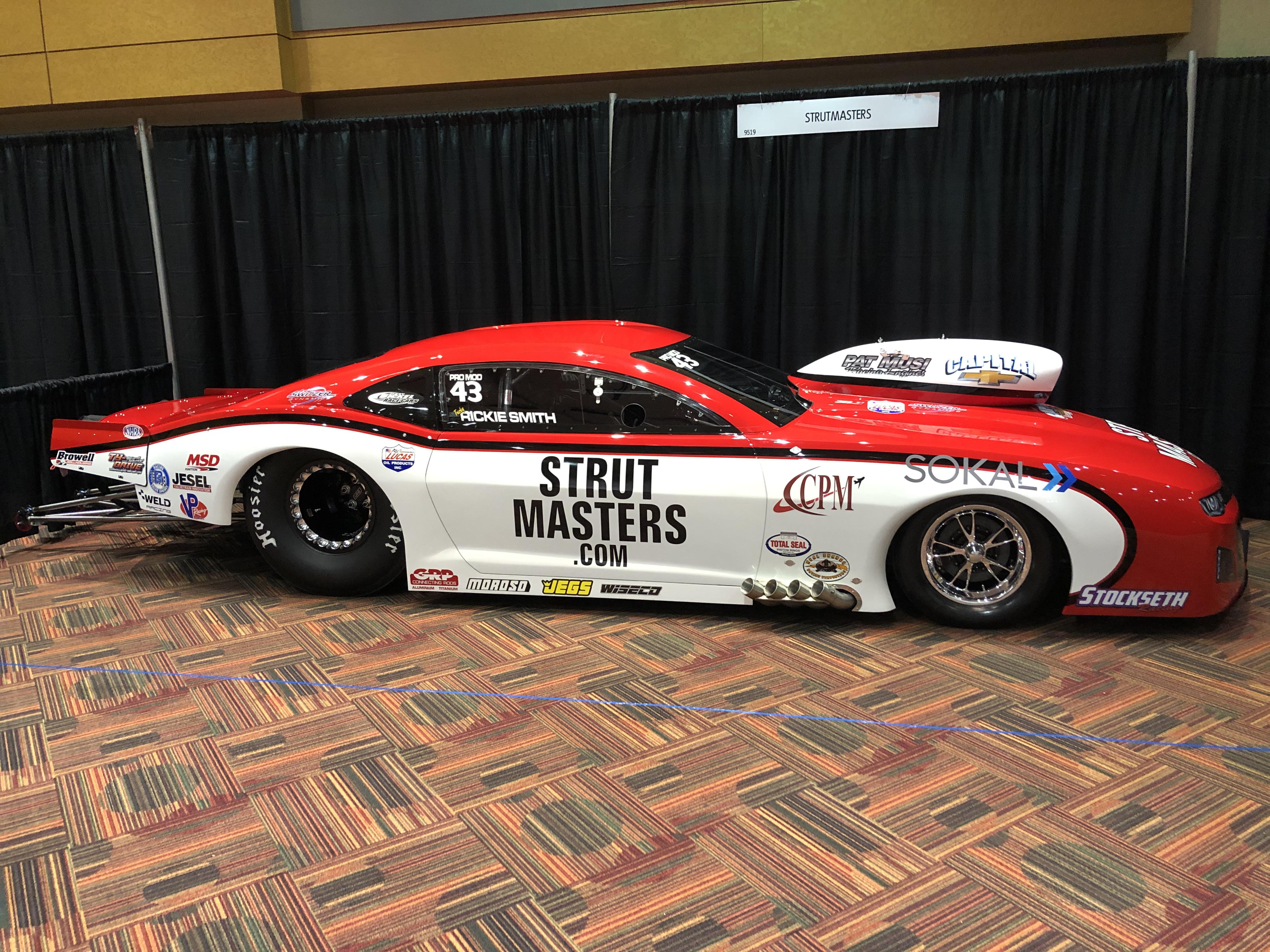 Rickie Smith left the NHRA Carolina Nationals in Concord, NC, knowing he needed a change. And for the 11-time series champion, a change has proven good.

Thursday morning, at the PRI Show, Smith announced Strutmasters.com as his newest major sponsorship for the 2020 season. He unveiled a brand new Jerry Bickel-built Camaro, the first of which to have the new NHRA-mandated safety requirements.

The driving force behind Strutmasters.com, Chip Lofton, has proclaimed himself as the champion for the little guy, but with this new association has swung for the fences.

"Growing up in the Carolinas and being a Pro Stock fan and a Pro Mod fan, I never thought I could reach this place where I could sponsor him," Lofton said. "He lives to race and races to live. He's been one of those guys that have figured out a way to do it."

So Lofton picked up the phone and called his fellow Tar Heel state drag racing aficionado. Before they hung up, they made a plan for Smith to drive down from King to the strut building facility in Roxboro, a place where the man drag racing calls Trickie, earned his stripes first as a Modified racer and later a Mountain Motor legend.

"He's just a down to earth person," Smith said. "I had no idea what I was getting into as far as knowing what he'd done and what he loved when I first met. It wasn't hard to see his love for the sport. It was like hitting three home runs in one game to find a sponsor who loves racing as I do."

Smith ventured into the portion of Lofton's shop where he keeps his stash of collector cars.

"You always want to be involved with somebody who really likes racing, and I didn't have to talk him into loving racing," Smith said. "That's a 200% start right off the bat when the people that you are dealing with love racing. It just makes everything go a lot smoother.

A day together left the two wondering why they hadn't done this sooner.

"Rickie came and talked to me," Lofton said. "I just thought it legitimizes my other teams as well, to have somebody successful like that part of our team. Rickie gets television time because he's a character.

"It doesn't hurt that on any given Sunday; he can bring the Wally home."

Smith doesn't brush off the notion he's been in racing a long time and has had a list of sponsors a mile long.

"From Motorcraft to Slick 50, to STP, to IDG, it sounds like a lot of sponsors, but I've been out here going on 46 years," Smith explained. "So when you're out here 46 years, and you make it, you're going to have a lot of sponsors. But most time, a lot of sponsors, three years, six years, is kind of the limit. And they go and deal with something else. And I was with Motorcraft almost eight or nine years and IDG, like five years or six."

Smith, now in the twilight of his driving career, cannot help but feel like he's got something special with Strutmasters.com.

"I've had some really good sponsors, but I feel excited about this deal with Chip he owns the company and doesn't have to call anybody or go get a board meeting or whatever to say, 'Yeah, we're going to do this," Smith said. "He's got the power to make the moves, and that's the way he like to deal with because, in automobile racing, you've got to make that move at that time. If you wait too long, people pass you up, and Chip can make the moves when he wants to make them."

Thursday, he made the move he's wanted to for a long time. And for Smith, he's glad Lofton did, the change is going to do him good.