RICKIE SMITH REVELS IN A WIN-WIN FINAL ROUND 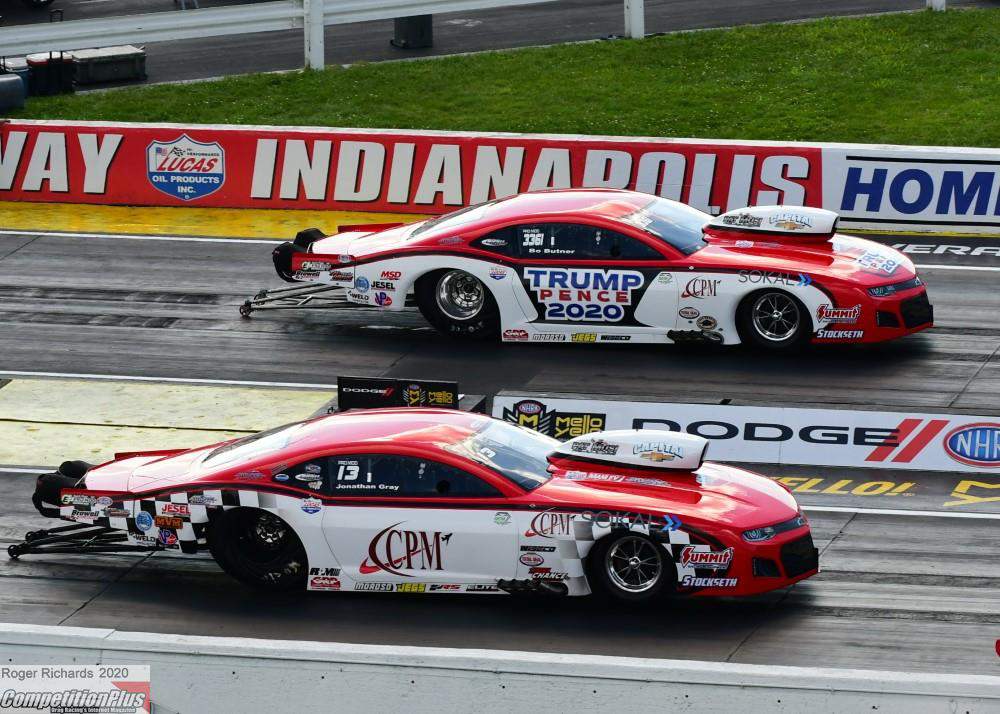 Rickie Smith cannot help it. When he discusses a feat he or his team have earned, he gets misty-eyed, and his voice cracks with emotion.

Sunday's all Rickie Smith Racing final, was enough to make the iconic doorslammer racer turn on the waterworks.

"Without my wife, and God and you can put that in print, Rickie Smith wouldn't be nowhere," Smith said, the emotion getting the best of him.

As NHRA announcer Alan Reinhart put it, "Rickie Smith is racing himself in the final round, and he's not driving either one of them. That's not easy to do. Rickie has done a lot of things in racing, but he's never done that before."

"Jonathan and Bo did a good job," Smith said. "Luckily I was good enough to get two cars stepped up and running like they're supposed to be running today. I've kind of been conservative with them trying to get them comfortable in the car and teach them how to drive these things. I told [Jonathan and Bo] this morning, I said, 'Guys, I got to start feeding these things. Power and do what I can. Y'all just need to stay ahead of them. And let's see if we can get down the track."

"Everybody did their job today."

Smith isn't going to complain about winning a clean sweep final round, but the outspoken drag racer who is rehabbing from back surgery would have loved to have been in one those cars.

"I know I'm getting older and all that, but I feel ..." Smith said, pausing to choose his words. "Jonathan and Bo realize it's hard to have a good life with a nitrous car."

Being on the outside as opposed to the inside and outside might have very well been a blessing for Smith, who also tunes both cars in his stable.

"I'm happy that all the cars are not torn up bad," Smith explained. "We broke one transmission. We got lucky. They had to send me over to Jonathan. His car had broken a transmission. And after that, everything in the final, what happened to Bo, his car went harder. Luckily it even got down the track. The outside of the cylinder head cracked and was dripping water on the track when he left."

Smith expects to be back behind the wheel of his Camaro now sporting Trump/Pence 2020 livery, at the NHRA U.S. Nationals over the Labor Day weekend. Sunday's performance, Smith said, was indicative of the caliber drivers he has piloting his cars. "Both of these guys are doing me a tremendous favor by renting these cars and letting me stay alive out here," Smith admitted. "I just tried to give them both a good car. I feel like both of them would have run within a hundredth of each other if Bo's car hadn't had just took that hard ride. It really wasn't nobody fault."

For Smith, walking away from the starting line, he had flashbacks to the days when he raced a Jack Roush Maverick powered Maverick and won so many Super Modified races the IHRA cancelled the class. And later as a dreamer running a Mustang II Pro Stocker sponsored by the Oak Ridge Boys. There's no way he could have envisioned what happened on Sunday back then.

"I would have said no way," Smith said. "When I started this stuff, running East Bend, Farmington and Piedmont, places like that, I just was tickled to death to go run against the Lyle Loveless and Mike Boyles. That was the two people that I wanted to outrun around home because they were bad to the bone. 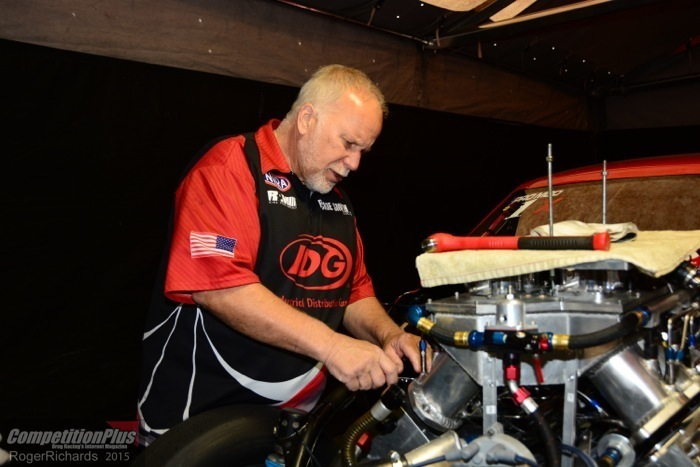 "I kind of patterned myself after those guys when I first got started and was just trying to compete with them. And then when I went on into Pro Stock then that's when Bob Glidden, Ronnie Sox and Warren Johnson were the guys that I really wanted to outrun. Those were three guys that I based myself to be like and try to do. I don't know if you could have got any better to try to go after, but if you're going to be the best, you got to beat the best."

Though Smith looked more like nitro team owner Don Schumacher, Sunday's final round was also a way for Smith to send a message to some of those he says have been talking smack.

"I mean, I don't have the money to run these things but so hard. It's the way I put food on my table and pay my bills and stuff like that. This is not a hobby for me. And I just have to watch how I run these cars and not tear them up. Because then I can't even be out here.

"I'm just tickled to death that everything worked out today. I knew I could tune these things up a little and run better than we were running. And I went after it today and today was a good day."

But as Smith gets the credit, he is quick to point out a backbone of the team is one who gets very little if any part of the spotlight.

"I try to surround myself with good people, and Chad Hester is one of them," Smith said. "Eleven years now he's stuck by my side. It's been tough sometimes. It's tough this year. Chad's had to go work for Tyler, my cousin in concrete. This has been a tough year. This is the first time since Chad's been working with me, that I would have figured out if I had to go borrow money I'd make sure he got paid."

And on Sunday, with all the hard work, everyone got paid, especially the man who made it happen - Rickie Smith. His payment had nothing to do with money, and everything about proving a point.