RIVENBARK RULES RADIALS VS. THE WORLD AT SWEET 16 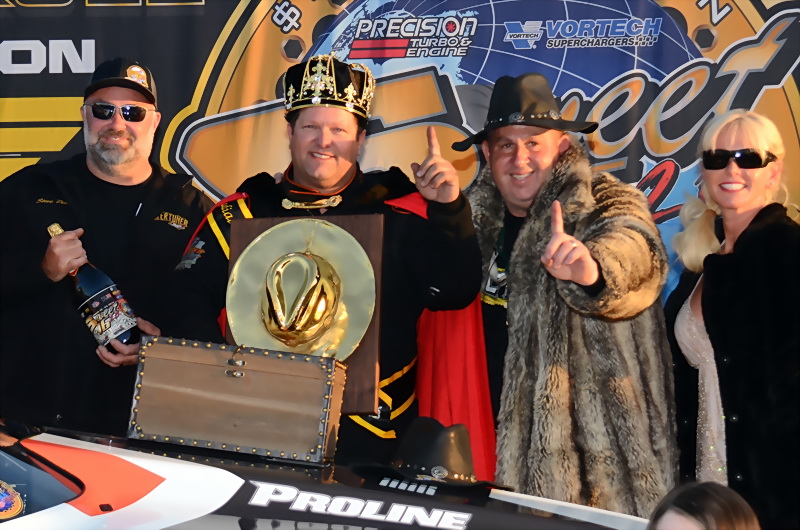 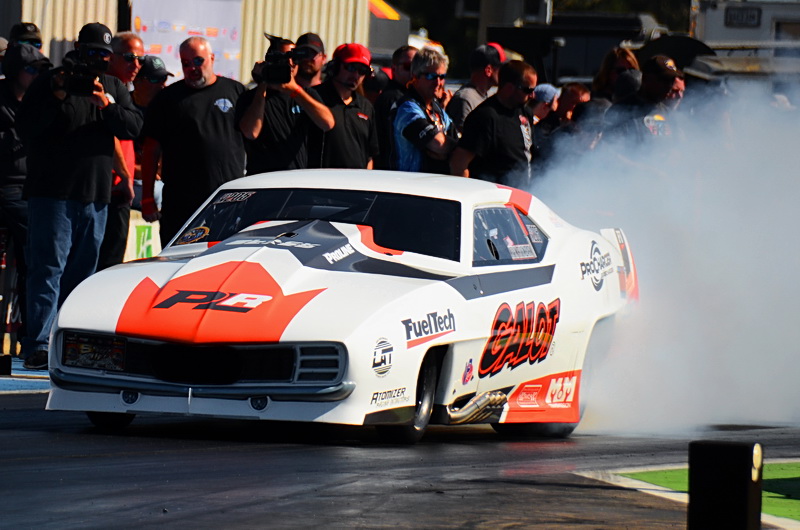 Don't screw up. That's pretty much all Kevin Rivenbark could think about at the unique Sweet 16 event Mar. 21-23, at South Georgia Motorsports Park. A red-light start in the Radials vs. The World (RvW) semi-finals just one month earlier at Lights Out 10 on the same track haunted the North Carolina-based driver.

"All day long and even all weekend my Lights Out result kind of bothered me and I just didn’t want to red light again and let my guys down," Rivenbark admitted shortly after a .048 leave in the Sweet 16 final against Norman Bryson led into a victorious 3.63 pass at 204.91 mph and a $101,000 payday.

"I can't lie, this is a relief," Rivenbark said in victory lane. "I would've never lived it down if I'd messed up again. But I was determined not to and it all worked out this time and I couldn't be happier about it. I want to thank my team owners, Mr. and Mrs. Wells, and my crew chief Steve Petty and all my guys for continuing to believe in me and support me. I'm just really happy to win this thing for all of them."

Forty-seven RvW entries made qualifying laps for Sweet 16, with Daniel Pharris of Sikeston, MO, holding the top spot at the conclusion of 11(!) qualifying rounds on the SGMP eighth-mile. Pharris and his twin-turbo '17 Mustang ran a record-setting 3.57 at 214.11 mph, with Rivenbark and his ProCharger-boosted '69 Camaro a close second at 3.58 and 205.79, and Marcus Birt stunning the entire drag racing world in starting third with an all-time nitrous racing record of 3.60 seconds at 204.76 mph.

Overall, five of the 16 qualifiers were turbocharged, four were nitrous injected, three had screw-type superchargers, two had roots-type superchargers, and two carried the centrifugal-type ProChargers to complete the quickest RvW field ever assembled. By comparison, the 3.69 posted by 16th-place starter Tom Blincoe would have put him fifth for Lights Out 10 in a field that featured a 3.79 in 16th place.

Number-one starter Pharris outran Blincoe with a 3.62 at 213.70 in the opening round of Sweet 16 racing, then took down Paolo Giust, the lone Canadian qualifier with his roots-type '69 Camaro, with a 3.63 at 213.54 in round two. A hot track caught up with Pharris in the semis, however, when he spun off the hit while 13th-place qualifier Bryson pedaled his way to a 5.01 pass and advance to the big-money round.

"We went up there second round and kind of swung for the fences against Paolo and it stuck and went .63, which kind of surprised me, given how hot it was. So we left pretty much the same set-up in it for the semis because we knew the track would be about the same and we just overpowered it," Pharris said. 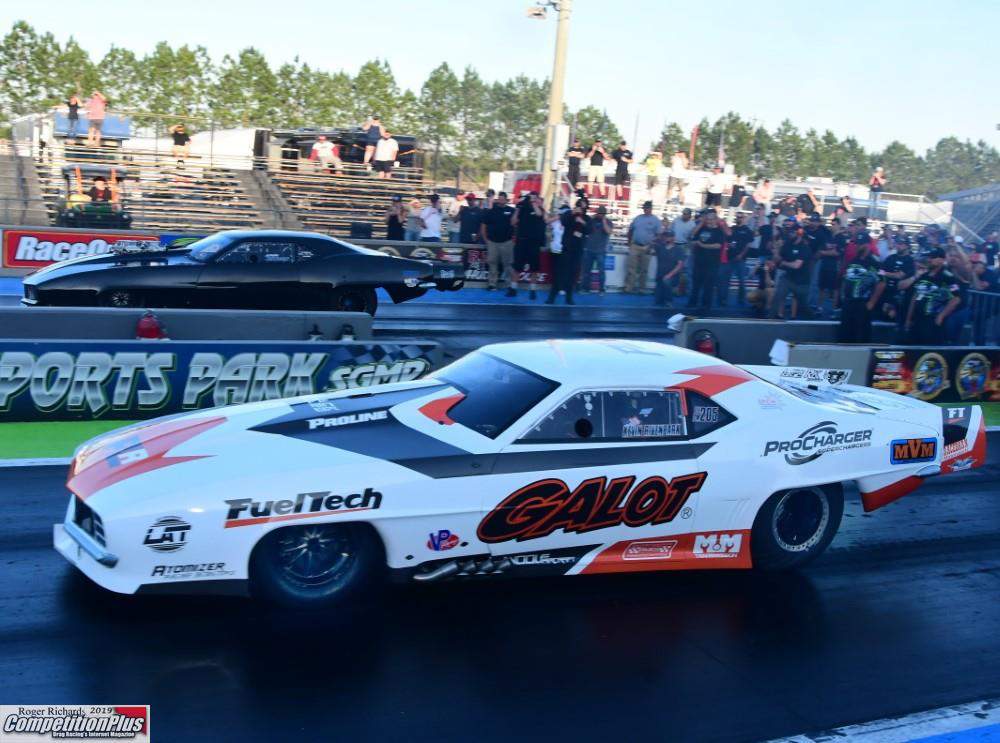 Prior to outlasting Pharris, Bryson ran 3.72 at 196.44 to overcome fourth-place starter Jeff Sitton, who was forced to shut down early, then made a 3.73 pass at 197.57 to get past fifth-place man Stevie Jackson, who also fell prey to the hot racing surface.

"The problem is we've all had perfect conditions all weekend until now. Wade (Rich) has the track in great shape, but we're all throwing too much power at it. Whoever can back it down enough--but not too much--to get down is gonna' have the best chance to win," Jackson later predicted.

Meanwhile, Rivenbark and Petty were marching through the field, opening with their own 3.62 at 205.35 mph to beat "Mustang Marty" Stinnett, who still came away with a little glory of his own after lowering his own turbocharged small-block E.T. record with an outstanding 3.65 at 205.98-mph effort.

Next up for Rivenbark was Ken Quartuccio and his twin-turbocharged C7 Corvette, who lost grip while Rivenbark powered to a 3.65 pass at 204.73 mph. However, crew chief Petty later revealed the GALOT Motorsports team also suffered its only real setback of the weekend with that win.

"I got a little aggressive with the motor and hurt it. I tuliped the valve. But my guys, Brandon and Foster and Chris, they slipped it out and put a new valve in and had it running. We had 45 minutes to spare and ate a cheeseburger. My crew is awesome," he said.

Waiting for Rivenbark in the semis was Mike Stavrinos after he'd dispatched Mark Micke, winner of last year's inaugural Sweet 16 race, and Brad Edwards in round two. Rivenbark took a .007 holeshot with his .010 light, then powered to a 3.66 run at 203.73 while Stavrinos labored in his nitrous-boosted 2014 Camaro to a 6.32 at just 72.95 mph.

"Basically our whole week was pretty rough. We didn't really make it down the track in any of the qualifiers until the very last one when we lit the boards with a .68, which was a personal best, and put us in at 11th," Stavrinos said in a brutally honest assessment.

"Semi-finals we kind of went for it, but it was pretty hot and nitrous cars don't really like the heat as much and we just spun the tire. We both hit the light pretty hard, but even if we went down we really didn't have anything for him anyways." 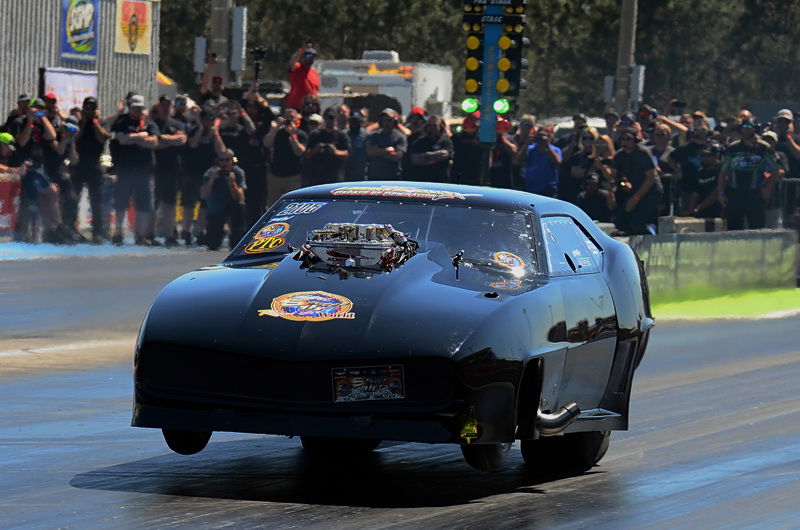 That left only Bryson and his nitrous-equipped '68 Camaro from Winston, GA, between Rivenbark and redemption. Despite the obvious disparities in performance to that point, Petty insisted he wasn't not taking his rival lightly.

As it happened, he needn't have worried, as Bryson started losing grip on the South Georgia asphalt even before reaching the tree. Meanwhile, Rivenbark left with a . 018 holeshot and powered through to a 3.63 at 204.91-mph winning effort.

"I'm a competitive individual and if we get there I want to win, but I am happy that we made it this far. As a team it's a huge accomplishment for us," Bryson said as he packed up his pit area.

"We were going for it in the final. We qualified with a .68 and had been running .930 60-foot times and wanted to get it down some because I figured he would run a .63 in the final. So we threw what we had at it and I wanted to run it hard and beat him on the scoreboard. It just didn't stick for us," he continued. "But I have to give my guys all the credit for what we did here, especially my son-in-law and crew chief Brent Rainer, they all worked really hard all weekend and gave me a great car. It was a huge accomplishment."

Rivenbark also recognized the wide disparity in performance between the finalists, but emphasized no one could be taken lightly.

"Some people would say that might have been an easy round for the finals, but I don’t think any of that was an easy round. Look at how many people he upset. I could have just as easily been an upset as anybody," he pointed out. "But I didn’t see him from the time we left. I either knew I was good on the tree and running fast or something had happened to him."

Later, with the pomp and circumstance of a Duck X Production victory lane celebration in the books, Rivenbark took a quieter moment to assess the accomplishment of winning a truly epic event, one to be remembered for the ages.

"I knew we had a pretty good chance coming into this, as good as anybody else at least," he said. "To have actually got the job done feels incredible, especially after what happened the last time I was here. It means so much to me to win this race for my team and for my team owners, and for our fans. I can't believe how many people are excited about this. It's a great deal."