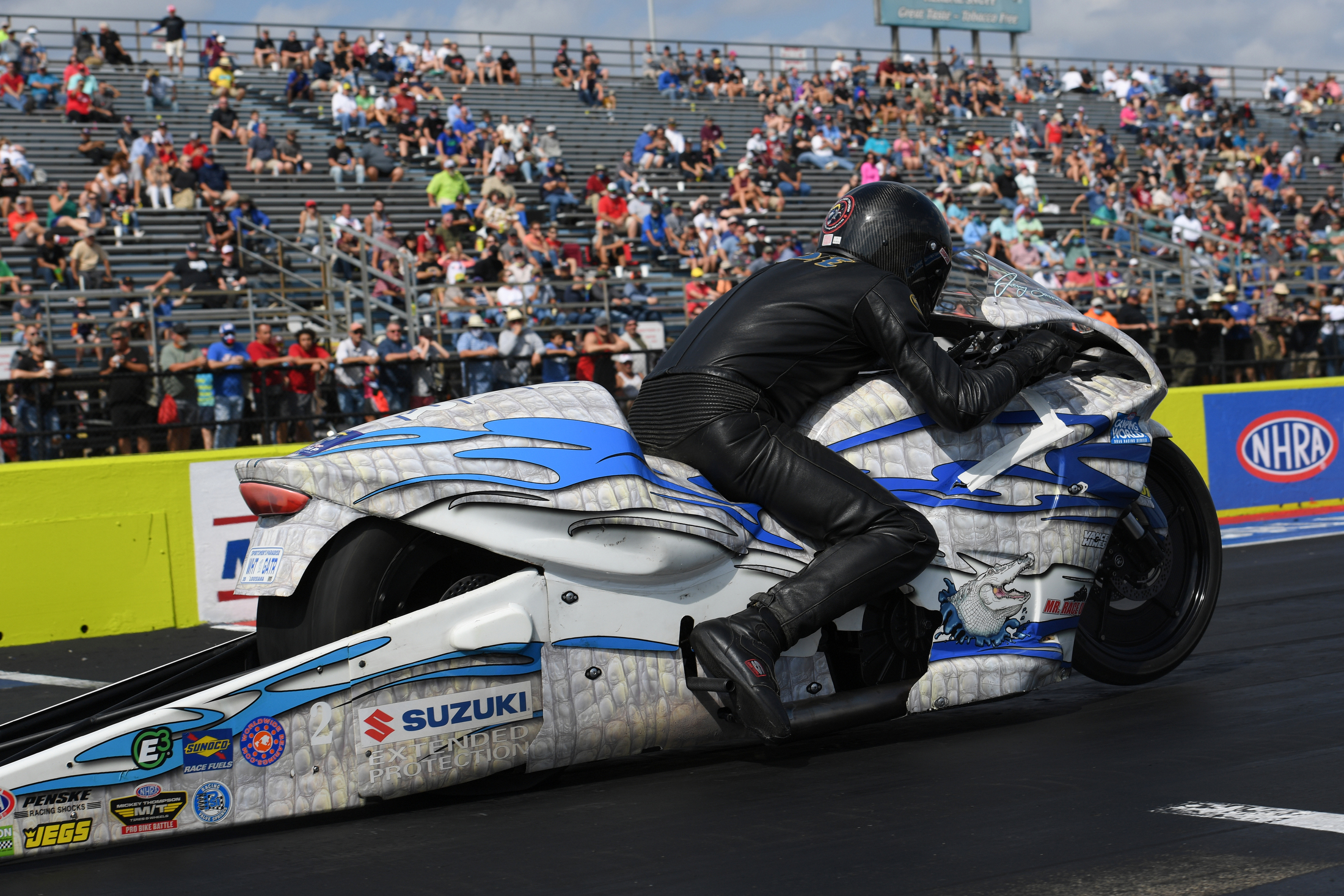 He has watched the markets for his alligator byproducts spiral downward in today’s swirl of economic disruption while his monthly costs of maintaining that business alone remain fixed at $400,000. 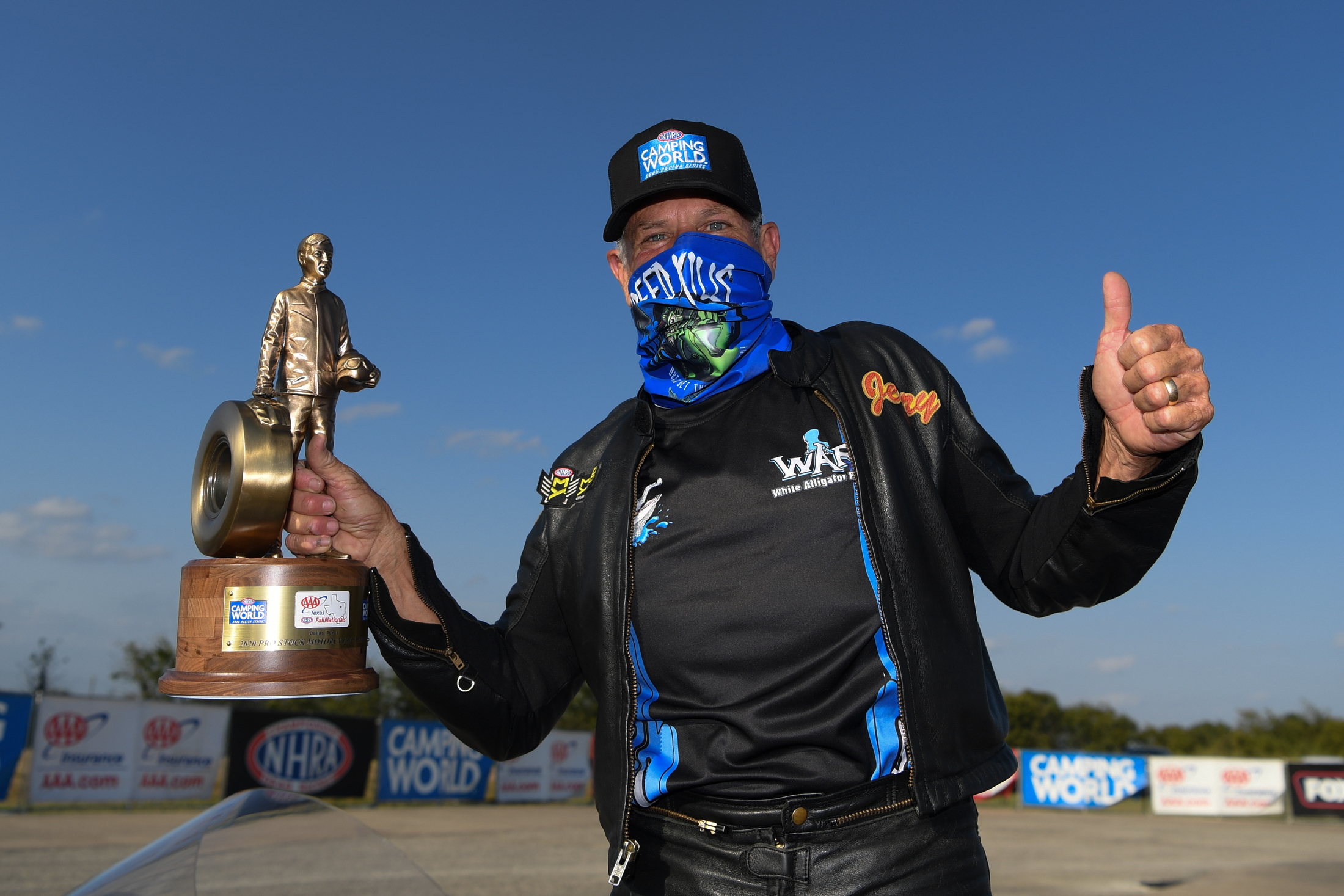 He has wrestled with whether he should step back from NHRA Pro Stock Motorcycle racing and be happy with his 2016 championship and 12 victories.

He has moped a bit about not having crowds to share his racing joy and fretted at least a little about what direction the sport might be headed post-pandemic.

He has wondered why he hasn’t won since last October at Texas Metroplex.

But by the end of Sunday’s AAA Texas FallNationals at Ennis, Savoie was celebrating his lucky 13th overall victory and third here, energized by fans, welcoming new series sponsor Camping World, and mounting a late-season performance surge like he did last year on his way to a runner-up finish for the year.

Savoie defeated Mark Ingwersen, Cory Reed, and Eddie Krawiec (with whom he had split four of those six final-round decisions) to reach his sixth straight Texas Showdown here. This time his opponent was first-time finalist Joey Gladstone, a racer he had beaten five straight times in head-to-head matches.

“Once you get your magic going in a place, it just keeps coming and coming and coming,” Savoie said, still astride his White Alligator Racing Suzuki and holding the Wally statue. “We’re not the fastest bike here, but the crew and Tim [crew chief Kulungian], everybody works so hard. It’s unbelievable. What can I say? All my people back in Bayou Lafourche and St. John Parish, we got it!”

He was missing one of his dear friends, just like last October, when he mourned the recent passing of one of his friends as he won the traditional black cowboy hat and trophy.

His friend, Mitch Compeaux, passed away Oct. 9 at their hometown of Cut Off, La., and Savoie said Sunday, “Mitch, I know you was on my shoulders today. I love you, bro.”

Compeaux, Savoie said, “was my CPA and real good friend. He used to ask me all the time about racing and how I was doing. He’s going to be missed. He was a special person and gave a lot to the community. He was one of the best.”

And Savoie was one of the best on his motorcycle Sunday, although he reiterated that he “didn’t have the fastest bike.”

What made the difference, he said, was “I think God was on our side. Luck was on our side. And we just outran ’em. We’ve really been struggling, but Tim’s been working real hard back at the shop.”

Mastering the Motorplex more than most Pro Stock Motorcycle racers – he tied Krawiec with the most bike victories here in the facility’s history – speaks to his love of the area.

“It’s kind of fate,” Savoie said. He said he and wife Vonnie “have been looking at a place in Lake Travis, Texas (near Austin). There’s just something about Texas I love. To come here and be in the finals six times and win three, it’s awesome, especially at my age (61). You never know when I’m going to retire. So it’s a great deal.”

Gladstone, 29, a Delaware native who lives in Ashland, Va., advanced to the finals past Hector Arana Jr., Michael Phillips, and Angelle Sampey.