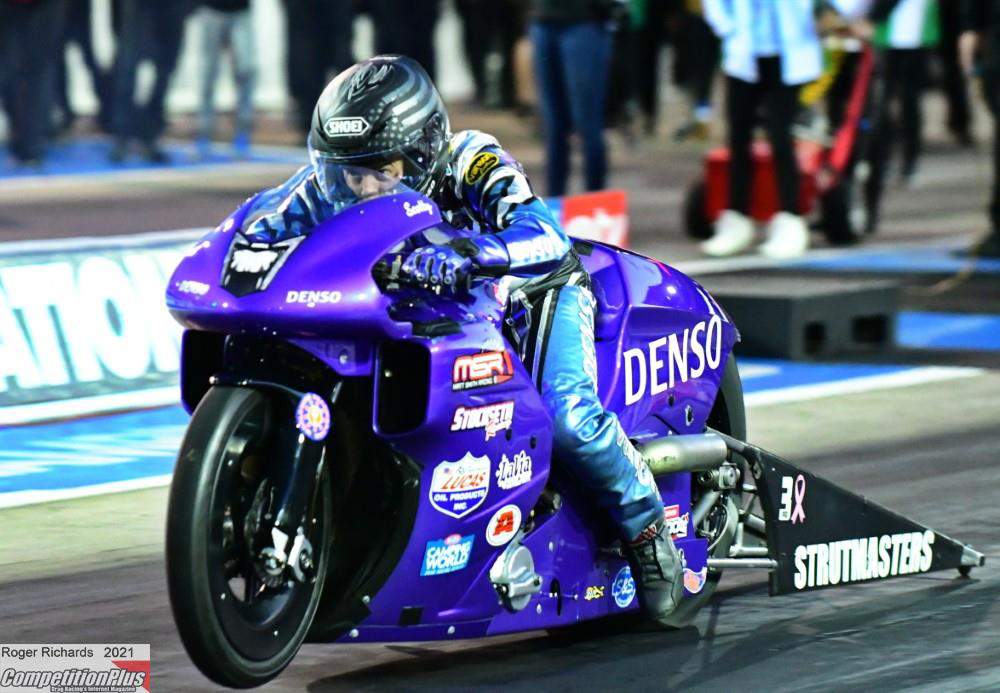 For the third time in the 2021 NHRA Camping World Series season, Pro Stock Motorcycle pilot Scotty Pollacheck will start from the No. 1 qualifying spot.

Pollacheck, who clocked a 6.859-second ET at 197.80 mph, snared the No. 1 qualifying position at the NHRA Thunder Valley Nationals in Bristol, Tenn., Saturday aboard his EBR entry.

Pollacheck also qualified No. 1 at Atlanta and Charlotte, N.C. This is the fifth of his career. Pollacheck made his run in Q3 to just edge Matt Smith, who came in at 6.865 seconds at 197.54 mph.

“It is so awesome to be here at Bristol and be No. 1 because it has been like 20 years since Pro Motorcycles were here and we weren’t even doing it back then,” Pollacheck said. “So, to come here, a place I have always seen on TV, and I always wanted to come to because it looked so awesome and end up with the No. 1 qualifying spot in the last round, that was pretty special for sure.

“I think it is great (racing at Bristol). I love coming to new places and new tracks we had never been to. Matter of fact, I had never been to Tennessee. We have a lot of friends from home who are moving here. Anytime we go to a new track it is an adventure and I love going to new tracks. I’ve always wanted to come here and I’m glad we finally got here. Everybody here has been awesome.

“Matt pretty much always makes good run,” Pollacheck said. “So, we get a lot of data from him and that kind of transfers into the other motorcycles. He is the one tuning them all and making all those calls. I’m just the dummy who sits on top of it and rides it and if I do my job things like this happen. This was a good team effort, him tuning and I did a pretty job riding. My wife, Sue, is here and Michael Ray works on our bike and he’s a stud. This was a good pass.

“It was definitely good over there in the left lane,” Pollacheck said. “Matt tried to go No. 1 and keep that No. 1 hat, so he just tried to go for it, and I think he gave it a little too much.”