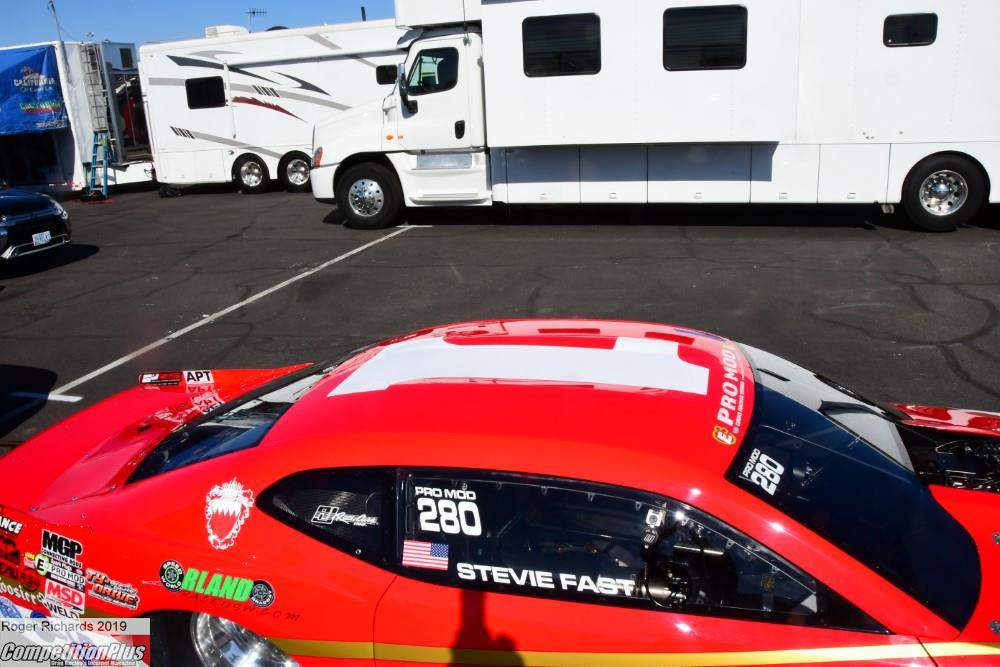 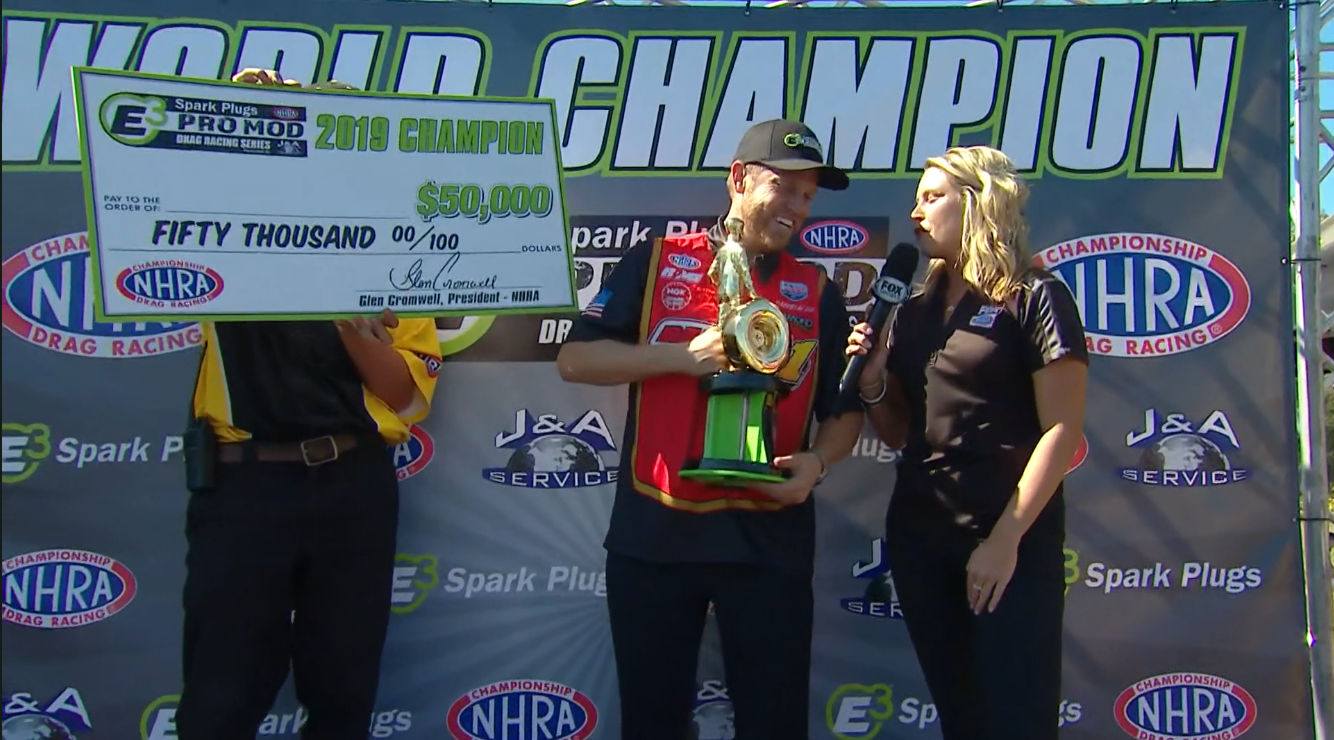 With a giant number "1" adorning the roof of his roots-blown 2018 Camaro to signify the accomplishment, "Stevie Fast" Jackson rolled into this weekend's Dodge NHRA Nationals presented by Pennzoil on The Strip at Las Vegas Motor Speedway as the newly crowned NHRA E3 Spark Plugs Pro Mod world champion.

Jackson clinched the 2019 series title with a semi-final win last month at the previous NHRA Pro Mod race in Charlotte before going on to defeat Steven Whiteley in the final to take home his third Wally of the year. It marked his eighth NHRA win after 14 trips to the finals in just 36 races entered over three years.

Still smarting from a runner-up finish to Rickie Smith at the prior NHRA event in St Louis, Jackson confidently declared his goal heading into Charlotte was "to just crush everybody,” but immediately after the race he tenderly dedicated the win to Billy Stocklin, his crew chief of nearly a decade who had recently lost his father, William.

“Rarely in life do we get an opportunity to positively and truly affect someone close to us,” Jackson said. “Billy was extremely close to his father and watching him go through the emotional rollercoaster over the last week, I knew this would be important to him coming off such a tragedy in his life.

"We never talked about winning the race until after it was over, but we both knew how important it was. I looked at Billy on Sunday and told him, ‘Nobody is going to leave on me today.’ It was very emotional for him and me. I hope that’s something he’s always going to remember.”

The NHRA win and championship came fast on the heels of a Radials vs. The World victory in mid-September at Virginia Motorsports Park, where Jackson prevailed in the quickest side-by-side RVW race in history over teammate Marcus Birt. Though Birt left a little too soon, negating a 3.58 at 205.19 mph in his nitrous-fed C7 Corvette (tuned by Jackson), a winning 3.59 at 210.67 mph by Jackson's screw-blown "Shadow" late-model Camaro made it the first pairing of 3.50s in radial-racing history.

And bookending his NHRA heroics was the RVW win for Jackson just a couple of weeks back in promoter Donald "Duck" Long's No Mercy 10 at South Georgia Motorsports Park (SGMP), where he and the "Shadow" beat Tim Slavens in the final with a 3.69 at 207.59 mph.

"It's tough to get me in October," Jackson declared shortly after winning No Mercy 10. "Every single year, October 1st at midnight, I send out a text: Run and hide, boys. Run and hide! 'Cause I'm coming to get some trophies and get some money. It's been an awesome few weeks." 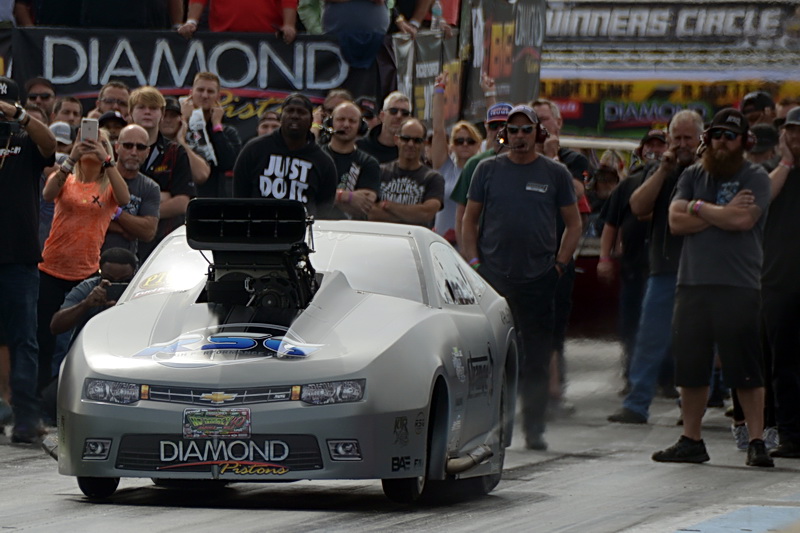 The race wins and NHRA championship points fund added up to more than $125,000 for Jackson's bottom line this year.

"I'm finally going to pay off my house," he declared in SGMP's victory lane before quickly adding, "Ah, who am I kidding? I'm just going to spend it on race car parts!"

Though Jackson milks his outgoing--some would say, outrageous--personality for all it's worth, he deflected most of the credit for this year's success to Stocklin and the rest  of his Killin' Time Racing crew, which includes longtime friend and Top Fuel crew chief Phil Shuler, as well as Jack Barbee, Robert Johnson, Robbie Lowry, Jeffery Barker, Drew McClure, Mike Hawkins, E. Ray Bryant, Matt Walden and simply, Austin.

"There's just no one better out here," Jackson declared after No Mercy. "I honestly feel like I have the best tuner in the world working on my car and when the track is questionable, like it was here today, that's when we shine. And I mean that's when Billy is on top of his game and when you have that, you have confidence driving the car.

"And that goes all the way back to the pits, just seeing my guys excited about what we're doing out there. We blew up a motor in the second round and they don't care. They got a new one out of the trailer before I even got the car back there. The engine's out and they're like, don't worry, man, we got this. We'll get it fixed.

"When you've got guys like that who believe in you and stand behind you the way my guys do, it makes it easy to win."

Enjoy the small collection of videos of the Stevie "Fast" Jackson journey over the past decade which led to an outstanding 2019 NHRA Pro Mod title. - #DragRacingNews #nhra https://t.co/alVcRDyzP5 pic.twitter.com/4ZLrIrbR7S