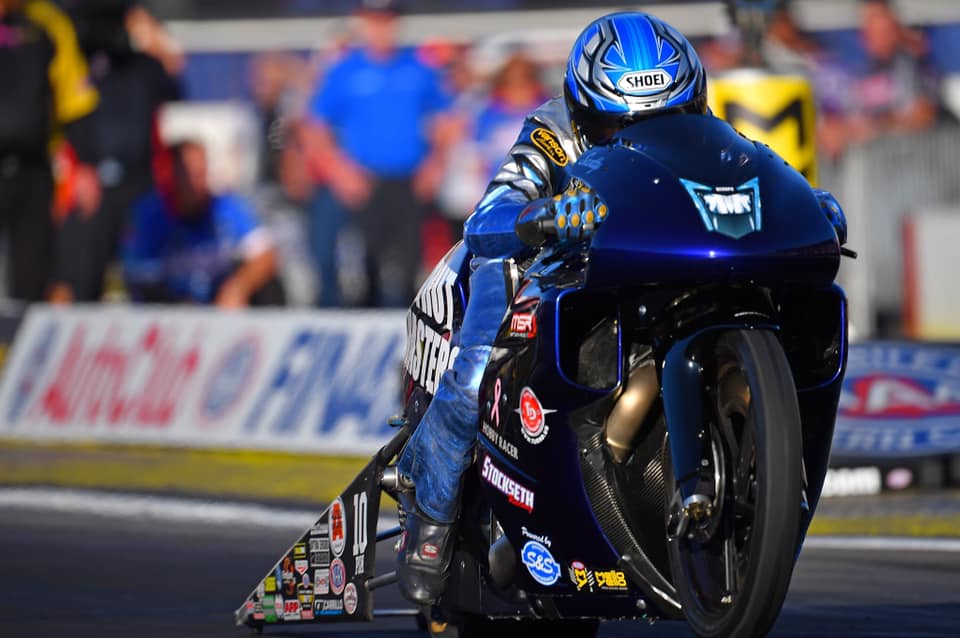 Veteran NHRA Pro Stock Motorcycle rider Scotty Pollacheck will be competing again in 2020 with Matt Smith Racing and will have financial backing from Strutmasters.

Strutmasters will be Pollacheck’s primary sponsor for the 16-race 2020 NHRA Pro Stock Motorcycle season which begins March 12-15 at the Gatornationals in Gainesville, Fla.

In 2019, Strutmasters.com signed on as Pollacheck’s primary sponsor the last six races of the season.

“We are super excited to have Strutmasters come back with us and support us for the whole season,” Pollacheck said. “Chip (Lofton, Strutmasters founder/owner) has been awesome. He’s a great guy and this is a great program having him support us.”

Matt Smith, a three-time Pro Stock Motorcycle world champion, runs Matt Smith Racing, and he, his wife, Angie and Pollacheck will be running V-twin motorcycles with S&S motors in the upcoming season. Matt was third in the points a year ago, Angie finished eighth and Pollacheck was 12th.

“We were impressed with the six races we had (with Pollacheck in 2019),” Lofton said. “We won some rounds and made some improvements and I like to work with teams that can make improvement and they are definitely in that category. This year, my understanding is that everybody under the Smith umbrella will be using the same engines and same motorcycles. Because of that, we think (Pollacheck) is going to have more rounds and better opportunities.”

In the final six races in 2019, Pollacheck won four rounds, highlighted by his semifinal finish in Las Vegas. He has competed in 129 career PSM national events and has six runner-up finishes.

“(The Pollachecks) are really, really nice, good people, and they are professional,” Lofton said. “I think they will win a few races (in 2020). That’s what I think. They make good decisions going down the track and when the motor wasn’t right, he turned it off and that’s all you can hope for. I think it is going to be a really good year with everybody having the same stuff.”

Pollacheck rode a Suzuki for the Underdahl-Stoffer Pro Stock Motorcycle team in the 2017 and 2018 before joining forces with Matt Smith again in 2019.

Pollacheck joined the Underdahl-Stoffer Pro Stock Motorcycle team in 2017 after having an alliance with Matt Smith and riding a Buell for several seasons.

“We had to kind of go through learning curves with our bike and me last year,” said Pollacheck, who finished a career-best fourth in the points standings in 2017. “This year (2020) we should start off way better than we did last season because we have a whole year under our belt. Every time you switch something like that it takes a while to get used to everything again.”