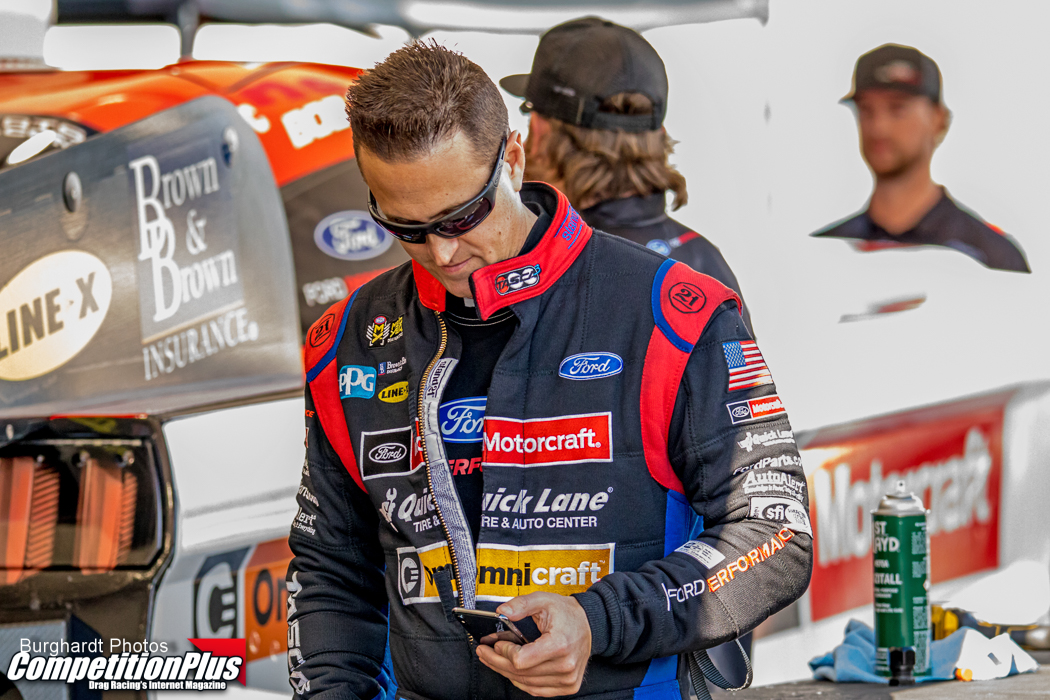 During his recent battle with coronavirus, NHRA Funny Car driver Bob Tasca has discovered that America has an unsung group of front-line heroes.

They’re far away from Kent County Hospital at Warwick, Rhode Island, where he spent several days fighting pneumonia in both lungs, coughing uncontrollably, and watching his heart rate fluctuate wildly – all side effects of the disease. There his already slim body was dropping pounds nearly as fast as his Motorcraft/Quick Lane Ford Mustang burns nitromethane on the dragstrip.

Tasca, who for 20 years has served on a Ford Motor Company advisory board on which his grandfather and father also once sat, is partial to Ford. And he wants to trumpet the message that Ford still needs skilled technicians.

“From the beginning of the pandemic until now, our technicians have been the backbone of our company. We did lay off a few and a few took voluntary layoffs because they were concerned about the virus, but our technician base was the main base of our company that never closed and was always there,” Tasca said.

“Granted, we’re not curing the virus like these unbelievably brave doctors and nurses, but they were on the front lines. They were getting in cars each and every day, as they do now, keeping America rolling,” he said. “That’s the bottom line, keeping our Ford customers on the road.

“The need for skilled technicians has not gone away. In fact, I think it has actually increased,” he said. “With less people taking airplanes, more people are taking cars: more miles, more service, more issues.”

And, Tasca, driver of the Motorcraft/Quick Lane Ford Mustang, said, “I’m a little biased, because I have Ford blue running through my veins. But if you’re going to be a tech and you’ve got all these brands out there, why not go for the one that has the most trucks on the road, the most cargo vans on the road, the most work trucks on the road? At the end of the day, those are the vehicles that need the most service and require the most attention. There’s no other brand that can deliver that level of service business than Ford.”

Through the NHRA’s Y.E.S. (Youth and Education Services) Program, Tasca has the responsibility – he would say opportunity – to speak with thousands of high-school students each year before national events across the country. 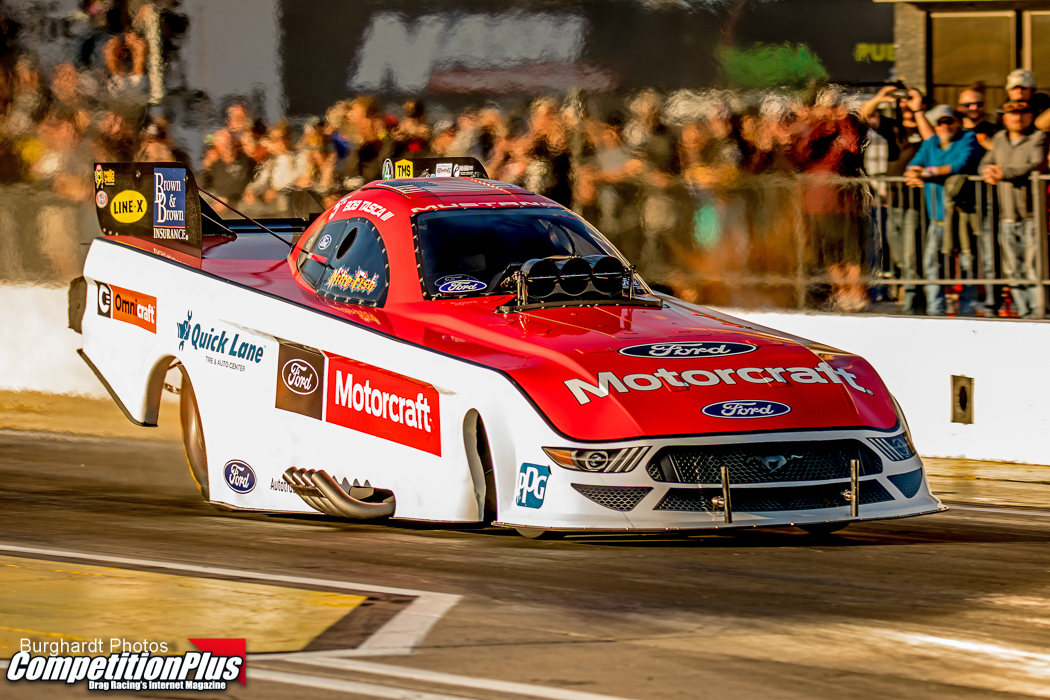 “I talk about job security,” he said. “In uncertain times, recessions, you could have your career disappear right in front of your eyes. I’ve made the joke ‘You’re too young to have lived through a recession.’ I’ll have to modify that now, because we might not necessarily be in a deep recession, but we’re certainly in a very challenging time.”

But Tasca has pleasant news – for a world that could use some these days – especially for those interested in servicing today’s increasingly sophisticated automobiles. 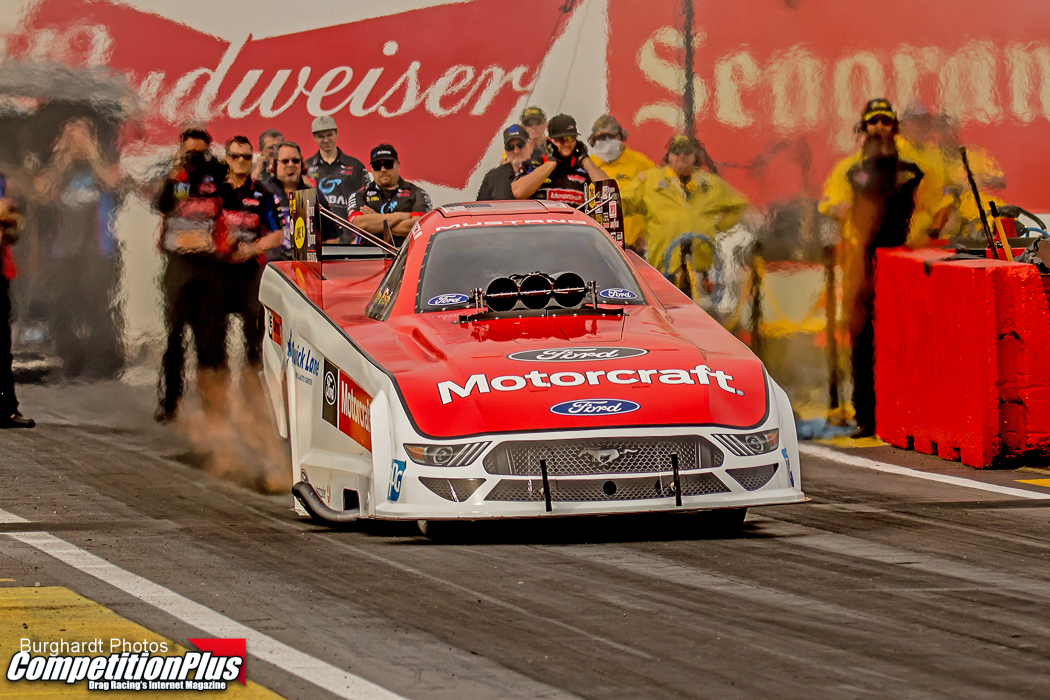 “There’s such an extreme shortage coming into this [pandemic], and I believe there’ll be an even bigger shortage coming out of this, with people retiring and demand going up,” he said. “If you’re out there thinking about this and what choices do you have and ‘Where should I go work?’ clearly we’re in a very unstable time, depending on the sector. There is no better time to become a Ford technician than right now. There really isn’t.”

“Being able to travel the country, to move from California to Rhode Island with a phone call, and you’ve got a job waiting for you,” is how the Vice-President of Tasca Automotive Groups and CEO of Tasca Racing explained it. “Not many career paths offer that – along with a six-figure career. That’s what we have some technicians in our company capable of doing. Some are. Some are on their way. It’s a great story to share, particularly with our audience, because there are a lot of people in motorsports who would love to work on vehicles.”

And the NHRA has recognized that. This past February, during the season-opening Winternationals, it introduced its Launch Motorsports Careers portal. Terry Vance, an NHRA Pro Stock Motorcycle legend and business mogul, donated $1 million to plant its roots.

Vance said for young mechanics seeking to start a career in the industry, “if you don't know anybody, you're kind of out. I know what that feels like, and it is a lousy place to be. I want NHRA Launch Motorsports Careers to help kids not feel that way.” The plan is for the sanctioning body to find a corporate underwriter that, in Vance’s description, “takes this thing into the stratosphere.”

Curiously, Tasca said, the NHRA phoned him during the racing shutdown and asked him if he wanted to follow other businesses in removing his company’s job-opportunity postings from the Launch portal.

“Absolutely not. Don’t cancel,” Tasca replied. “I need more technicians now than I did last month.”

He said this proves that what he has been telling high-school students: “No matter what the economic times are, we need qualified technicians. Business has been at the forefront during this pandemic like never before.”

He said, “It’s a great message, a great career path. The Y.E.S. event is not going on at this time, but it will be back.”

Tasca, too, made his comeback, one of the most dramatic in a sport known for its theatrics.

He had to watch from afar when NHRA drag racing made its reappearance this season, at Indianapolis, following a four-month shutdown. The NHRA had added two July races at Indianapolis to make up at least a little bit for losing one-third of its season to the shutdown and further state and local public-health restrictions. However, Tasca was unable to participate at the first one, the E3 Spark Plugs Nationals at Lucas Oil Raceway. Jonnie Lindberg substituted for him and did a commendable job, qualifying second and advancing to the quarterfinals. 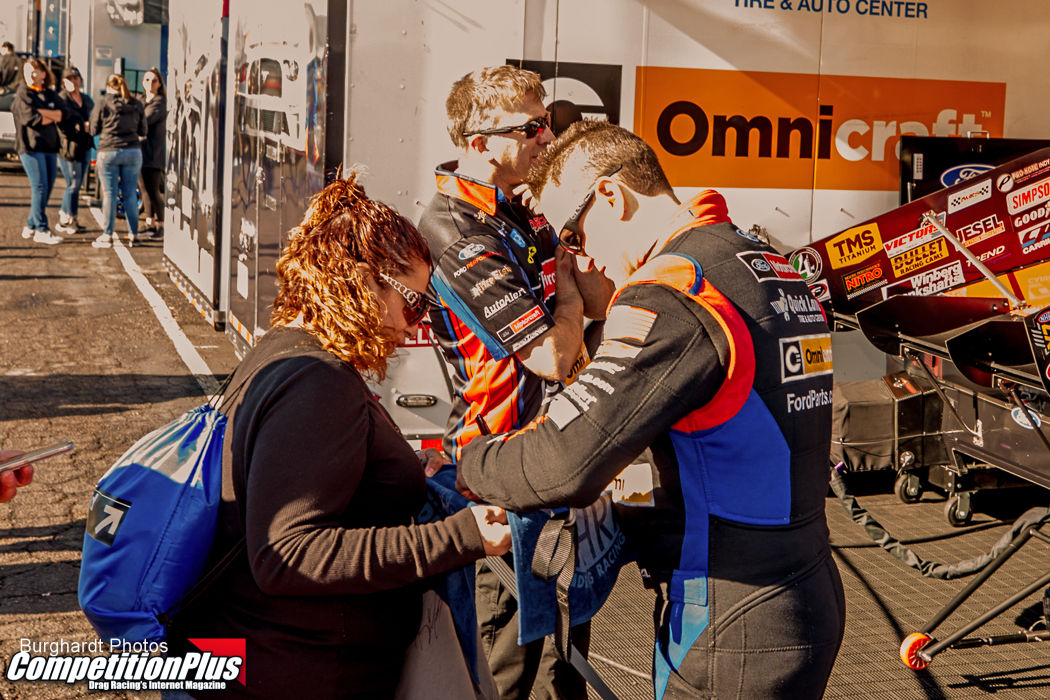 But Tasca received medical clearance to race and reclaimed his seat at the July 18-19 Lucas Oil Summernationals and gave the fans a chance to feel their own heartbeats fluctuating a bit.

His return to the dragstrip was another fight for the man who already had fought through his illness but said he had “worked hard to get my body back in shape before I came back and also make sure I couldn’t pass COVID-19 on to my crew.” With only two qualifying sessions at this point in the year at the two-day races, Tasca covered the 1,000-foot course in 4.567 seconds to take the provisional No. 13 spot in the 16-car lineup with his first run. By the time he came to the starting line for his second pass that Saturday, Paul Lee had bumped him from the field. Tasca needed to produce an elapsed time of at least 4.554 seconds.

Although he had qualified for 228 previous races, Tasca knew it wasn’t a slam dunk. He wound up on the bubble in the first place because Matt Hagan, the winner on this same racetrack six days before, also was fighting even to make the 16-car field. Hagan bumped Blake Alexander and shoved Tasca down to No. 16 before the determined Lee knocked him out of the show altogether.

But Tasca called on his skill and his pluck and reeled off a 3.991-second pass at 319.07 mph to vault back into the field at No. 1 with both the day’s best time and speed among Funny Car racers.

“If my heart wasn’t ready to go, it would’ve failed right there on that run,” Tasca said, allowing himself a laugh.

His heart also is in helping America’s youth understand that Ford needs technicians – that really, most automakers do in their stores nationwide. If he can beat a vicious case of coronavirus, he can help usher a lot of job-seekers to the right places.