THE JUSTIN ASHLEY WAY: STRUGGLE IN QUALIFYING, SHINE IN ELIMINATIONS 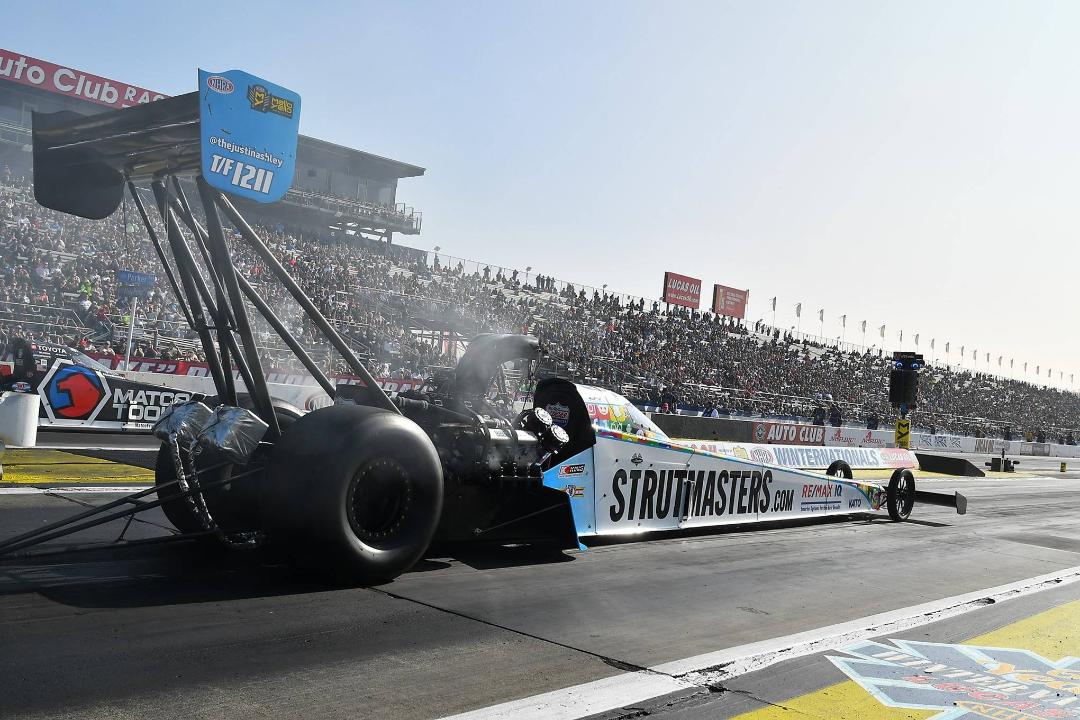 NHRA Top Fuel rookie Justin Ashley didn't need any inspiration to put forth his best effort at the Lucas Oil NHRA Winternationals in Pomona, Ca. All the Auto Club Road to the Future candidate needed was for his Strutmasters.com dragster to stay healthy, and he'd do the rest.

Ashley, who made his NHRA Top Fuel debut last season, and competed in three races caught the nitro community off-guard when in his first race he reached the semi-finals losing a race he may have won if not for a mechanical issue. He also raced his way to a quarter-final finish at the NHRA Finals last season.

The common denominator in every race Ashley has participated in, including last weekend's event in Pomona, the team has struggled throughout qualifying, but when everything was on the line made a run representative of what the team is capable of to get in the field. Then on raceday, The team has come alive.

"I guess it's proof of how it doesn't matter how you start but how you finish, which means the most," Ashley explained. "We've faced adversity, but we've also come together with Aaron Brooks, Jason Bunker and the whole team at Dustin Davis Motorsports to overcome the challenges. For us, last weekend, we spent much of it chasing an issue with shredding blower belts."

"We got in the field with the 3.967, and that was basically an eighth-mile run because the belt came off early."

Ashley opened Sunday's final eliminations by taking out a much quicker qualifier in Shawn Langdon and did so with the first run the dragster had made to the finish line under power - a 3.726, 323.58.

"When you can face adversity as we did and come out on race day with the quickest and fastest pass for our team, that just shows our team has heart" Ashley said.

Not that Ashley needed much inspiration, he was already inspired before he arrived at the track on Wednesday to participate in the NHRA Media Day. Three years earlier on the Pomona weekend, Ashley lost one of his biggest fans and personal mentors - his grandfather Kenneth Ashley.

"Losing my grandfather suddenly was tough,", Ashley said. "He was my biggest fan and I was his. He was somebody that I looked up to. The most important thing I learned from him was to always move forward no matter what. He had an unbreakable heart.”

Ashley, in the meantime, returns to his day-job, fixing and flipping distressed properties on New York's Long Island, prominently featured in the online reality series, #FixFlipFuel.

"We will be back in Phoenix," Ashley added. "I'm hoping for a much smoother weekend, but it is what it is. Whatever comes our way, I know the Dustin Davis Motorsports team can handle it."