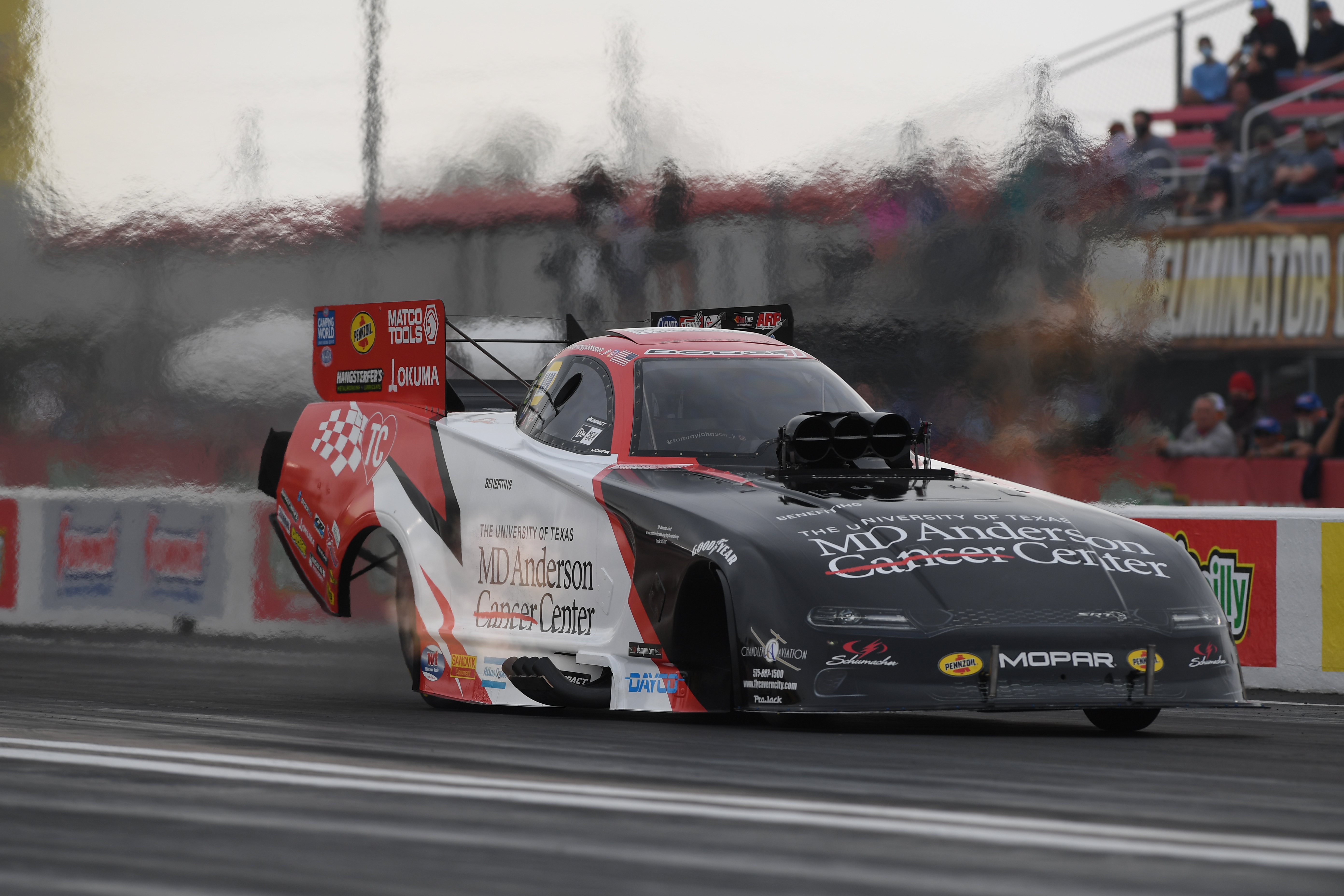 The reality of the situation couldn't have been any clearer for Tommy Johnson Jr.

To have a chance to at what could be, unfortunately, his last legit chance to win an NHRA Funny Car title, 21-time NHRA national event winner had to find a way to leave Houston Raceway Park with win No. 22. 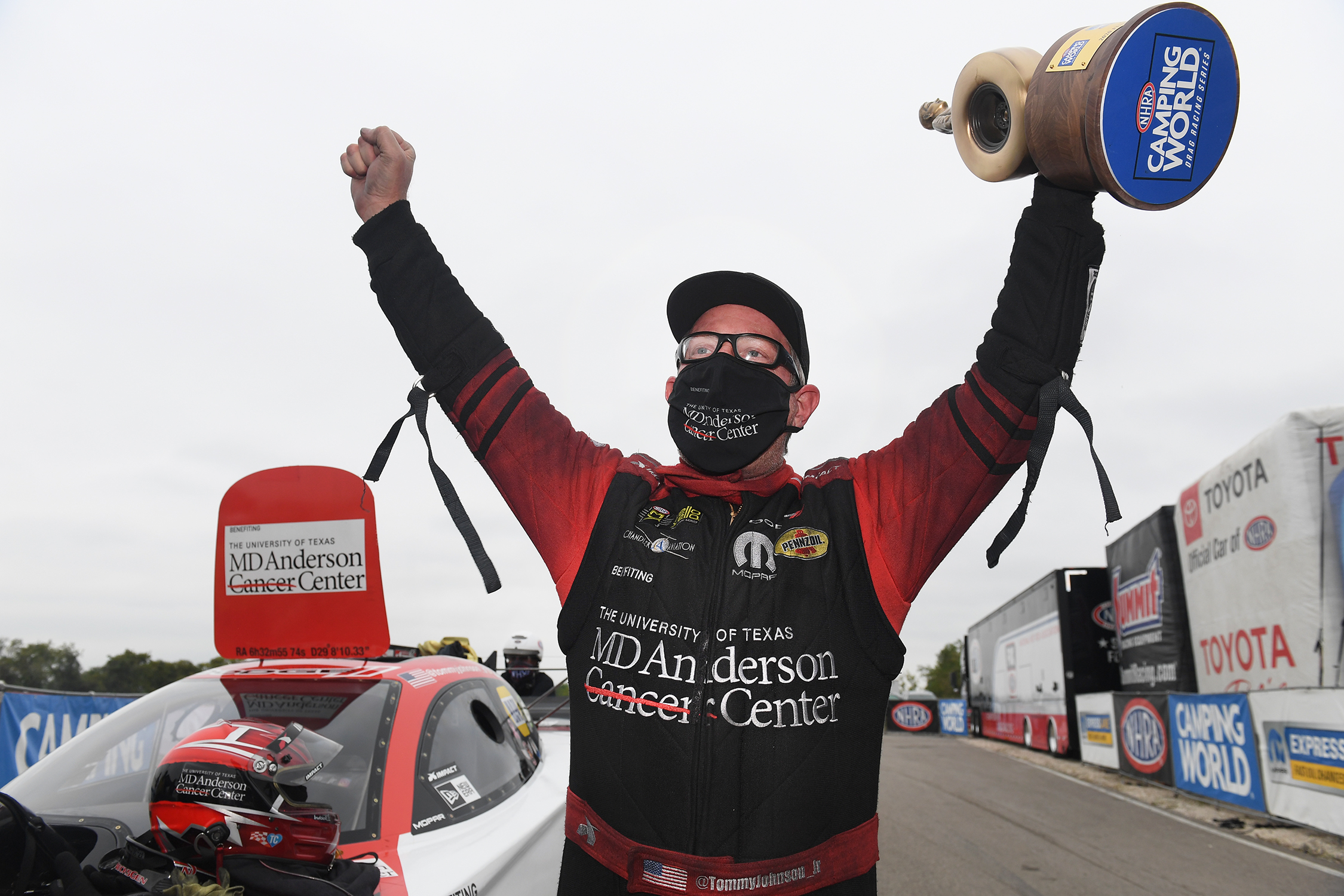 Sunday, at the NHRA Springnationals, an event rescheduled amid a pandemic-ravaged season, Johnson proved he still has a measure of magic left in his final races as the driver of the MD Center-cloaked Dodge Charger Funny Car.

Johnson stopped teammate Ron Capps in the final round.

"It was a must-win," Johnson admitted. "We get close and, then we stumble, and I think we're out of it and then next race here we come again. I think we've been a thorn in their side a little bit because we just keep coming back every time. It's like a heavyweight battle. We get knocked to the canvas, and we get back up and here we come again and keep swinging."

The win was Johnson's third of 2020 and moved him to within 42 points of leader Matt Hagan.

"Really. every one of these guys," Johnson said of his crew. "They don't quit, and you can't quit. It's been a weird year, and it's been a good year for our team. Even though it's been a tough year for everybody, it's been a really good year. That's three wins this year. I hate it because it's been such a weird year because we're having such a good year. For these guys, I hate it because maybe we could have won a bunch more if there were more races. But just super happy with the fight in these guys, they just keep coming. The Countdown this year, you don't need one. I mean this has got drama written all over it for Vegas."

Johnson heads into The Strip at Las Vegas trailing Matt Hagan by a mere two rounds of competition and a second-place qualifying bonus points earning effort.

"It's probably our best shot," Johnson said. "In the years past, we've been there; I think three times. I've been second once and we weren't expected to be there ... like, 'Oh, where'd they come from?"

"This time, we're there and want to go. I've almost gotten used to the disappointment, and it aggravates you after a while. You're like, 'Come on, all these other guys win, and how come I can't win one?'

"So there's a little bit of extra drive in there because of the past disappointments and I can relate well with what Capps went through for so many years and what Doug Kalitta goes through every year. I feel for those guys because I've been there a lot and it gives you a little extra something. But in the big picture, it takes the whole team, and it's just not you. It's the whole team. So it takes a good team, it takes a good driver, it takes a good car. It takes a lot of luck, and then you can put together a championship. They're few and far between. You just need everything to go your way and it doesn't always go your way. So maybe this year. Maybe Terry is looking down on us. Maybe this is our time."

The victory marked the 66th time Don Schumacher Racing has doubled up with Tony Schumacher also winning Top Fuel. It was the 13th straight victory for DSR's Funny Car teams.

Such stats are not odd for the nitro powerhouse, but the 2020 season has been anything but ordinary. However, as Johnson sees it, the drag strip is as regular as it gets.

"It's definitely been different," Johnson said. "It's a closer atmosphere. We don't have the distractions maybe that we might normally have but at the same time once you fire the engine, there's no difference. I've raced all around the world. Everything is different in the world until you get to a drag strip. It's all the same. So even though the world's different these days, it's still the same at the dragstrip, but when they pull the wires on the thing, it's every man for themself and whichever team does a better job is who's going to win, and these guys have done a really good job under really tough circumstances."

Johnson's final round opponent, Capps, who qualified 16th, actually helped TJ's championship hopes when he took out point leader Jack Beckman in the first round. The runner-up finish put Capps in third place in points and just one point behind Johnson headed into Las Vegas.

"It was just a good race," Johnson said. "You knew it was going to be a solid race. I didn't see him the whole way, and I threw the parachutes, and he passed meI I thought, 'He must have been closer than I thought.

"I did happen to see the light come on, so I was like, 'Ooh, that was closer than I wanted it to be.'" 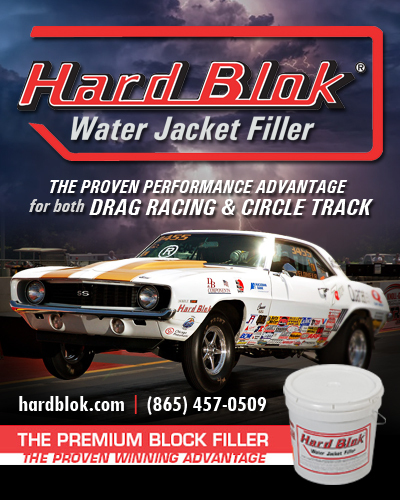