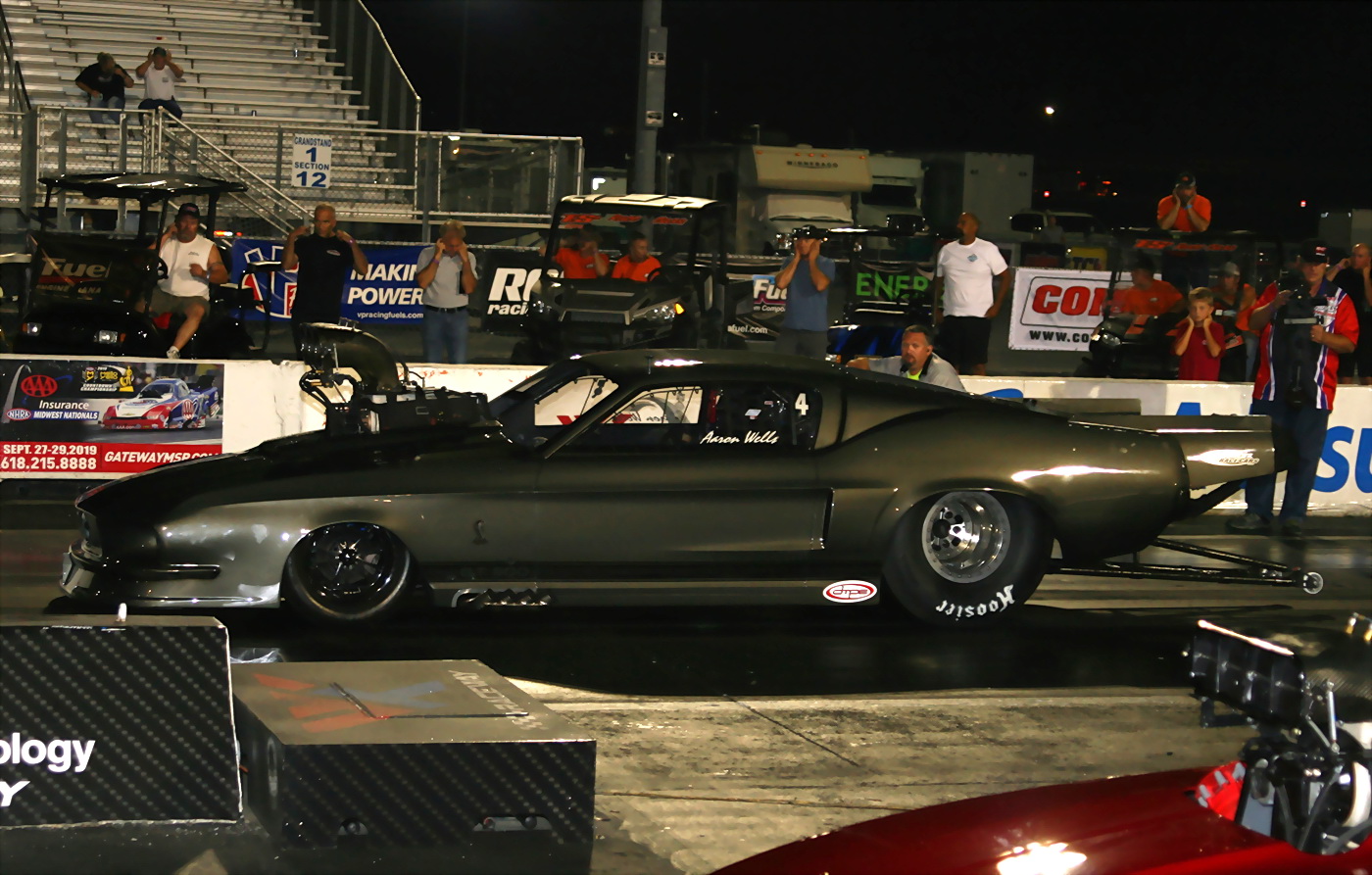 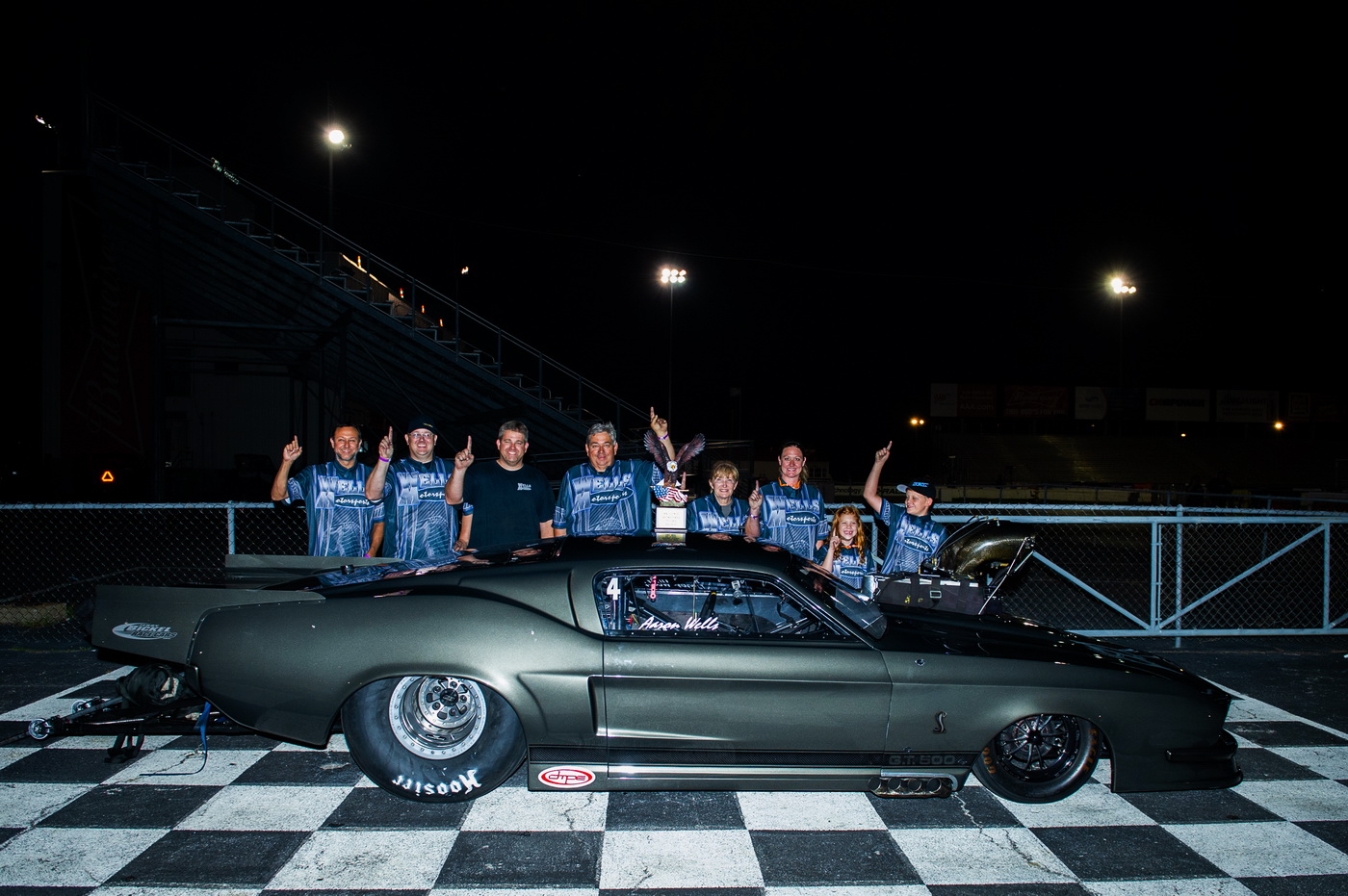 Wells and his supercharged, Bickel-built '67 Mustang ran 3.712 seconds at 203.98 mph over the Gateway eighth-mile to qualify third for the 16-car Pro Mod field. Number-one starter Todd Martin posted a 3.706 in his blown '68 Mustang, followed by Chad Green at 3.709 in a nitrous-huffing 2017 Corvette. Craig Sullivan held on to the 16th-and-final spot with a 3.89 after 24 entries made qualifying attempts.

"I really believe there's a number-one qualifier curse, so I'm good with not being number one, but number two or three is good. I'm satisfied with that," Wells insisted. "All I care about is being consistent. In this series that's a necessity, especially with some of these cars as fast as they are."

Wells opened eliminations with another solid 3.73-seconds pass to defeat Californian Mark Luton and his 2017 Mustang. In round two he downed the screw-blown C7 Corvette of Randy Merick with a 3.72 before taking out a redlighting Chad Green with a 3.69 that stood up as low E.T. for the meet.

Meanwhile, on the opposite side of the ladder, number-eight starter Jason Hamstra drove his blown '69 Camaro down a fortunate path to the final as he ran unopposed in round one when Mike Recchia was unable to post a time, benefited from an early start by Martin in round two while mustering only a five-second result, and made another tire-smoking single in the semis when Justin Jones wasn't able to fire up his supercharged 2018 Corvette.

That left only the final round, where Wells mounted a come-from-behind charge in 3.96 seconds to beat Hamstra's traction-challenged 4.18-seconds effort.

"Our car went well to about 60 feet and then tried to spin the tires. It didn't really try to get out of control, but it was time to pedal and get back on it," Wells recalled. "So he got out there a little ways on me. I could see him the whole time, but I could also hear his car having problems.

"So it turned into a real race to the finish by the time I was able to get back on it, which was kind of exciting to see all that happening out in front of me. Then to still to be able to drive around him in the eighth mile was pretty unreal, pretty uncommon."

The win solidified Wells' position atop the MWPMS Pro Mod points list, giving him nearly a full race's worth advantage over Jones in second with just two events--at Memphis and a second visit to Tulsa, OK--remaining on the 2019 schedule.

"The honest truth is that it doesn't matter what the points look like; I just want to win every single race," Wells stressed. "We've got what I would call the best all-around car in the Mid-West Series. It might not be the fastest every single time we go out, but it is right where we want to be as far as consistency is concerned.

"And I am having a ball racing with my family. My mom and dad are on my crew, my wife's on my crew, and my two kids help on the car. Plus I have two good friends that work their rears off in the shop with me. So, you know, it couldn't be going better for us.

"I also have to thank Keith Haney and everyone with the Mid-West Series for putting forth the effort to not only create a place for us to race, but to keep things going and trying their best to do everything they can to be fair to my engine builder, Darren Mayer, and all the people that are supporting us at Summit, Jerry Bickel Race Cars, Marty Chance Converters, all these guys that we deal with on a day-to-day basis with these cars."

The Summit Racing Equipment Mid-West Pro Mod Series will be back in action Sep. 13-14, at Memphis International Raceway, followed by the official MWPMS season ender Oct. 11-12, at Osage Casino Tulsa Raceway Park. A 16-car, invitation-only MWPMS Pro Mod race also will be held Oct. 18-20, in conjunction with the NHRA national event at the Texas Motorplex, south of Dallas.