Rod Fuller likes the desert, particularly the Southwest. Fuller, who
resides in Las Vegas, is the two-time defending event champion of the
Phoenix race at Firebird International Raceway. That is where Fuller
and his David Powers-owned Caterpillar team will launch their 2008
season during the National Time Trials at F.I.R.

Similar to spring training for Major League Baseball, Fuller and his
Rob Flynn-led crew will assault the F.I.R. quarter mile for six days of
preparation for the 2008 NHRA POWERade Drag Racing Series season, which
begins at Pomona, Calif., Feb. 7-10, with the 48th annual CARQUEST Auto
Part Winternationals. It will be the first time that Fuller will return
to the seat of the Caterpillar rail since undergoing major
reconstructive knee surgery on Nov. 9, 2007, just five days after the
completion of the ’07 NHRA season.

“My knee feels great,” Fuller said. “I’ve had a pretty boring off
season. I had a great visit to Caterpillar’s corporate headquarters in
Peoria (Ill.) in December and went home to Arkansas for Christmas, but
otherwise I stayed at home and rehabbed my knee. It was a lot of
intense training, but it really paid off.”

The National Hot Rod Association will bring their brand of championship
drag racing to the Carolinas with a "national event" at the drag strip
currently under construction on Lowe's Motor Speedway property,
according to a track press release. An announcement of the event, set
for the Sept. 11-14 slot listed as "TBA" on the NHRA schedule, is
slated for Thursday at 11 a.m.

Parts Pro Performance Centers will be returning as the sponsor of the
Crew Chief of the Race Award at each Pro Modified Racing Association
series event for 2008.

“The Parts Pro Performance Centers Crew Chief of the Race Award will be
presented to the Crew Chief and the team of individuals that did an
outstanding job throughout the course of the weekend based on their
strategic planning and race day calls,” explained Kevin Dundas, General
Manager of Karbelt Speed & Custom, the Eastern Canadian Parts Pro
Distribution center. “This award is designed to bring recognition to
the hard work and dedication that crew chiefs display, whether they
made it into victory lane or simply finished strong.”

With "A Passion for Performance", Parts Pro Performance Centers, the
fastest-growing automotive performance parts distribution network in
North America, continues to provide the hottest products in the high
performance industry.

CIFCA completed its 23rd
season with it 2007 Awards Banquet held at the Boulder Station Hotel &
Casino. Over 100 people representing 15 teams were in attendance.

In total 18 awards were
handed out. The awards were for the CIFCA top 10 in points for the 2007 Season,
Bonus Program Awards, and awards for Outstanding Club Member Achievements. The
Award winners were:

With the 2008 NHRA POWERade Drag Racing
Series campaign less than a month away, U.S. Army Top Fuel driver
Tony “The Sarge” Schumacher is already figuring on another
edge-of-your-seat type of season.

After securing two straight world
championships at the last race and in the final round each time,
Schumacher assumes the script will remain the same for some fortunate
Top Fuel team.

“There’s no reason to think
anything will change given the Countdown to the Championship format,”
he offered. “Frankly, I hope we do have a finish like we’ve had
the last two years. It’s really terrific for the fans.”

Of course, Schumacher will be counting
on his U.S. Army team to be right in the middle of the action leading
up to the season finale in November. But, between now and then,
there’s plenty of work to do beginning with this weekend’s
National Time Trials at Firebird International Raceway outside of
Phoenix.

WILL TO APPEAR AT AUTO EDUCATION DAY

Will, a 27-year old native of Fortuna, Calif., and current resident of
Ypsilanti, Mich., will be interacting with local students and signing
autographs at the annual event that draws media attention from over
6,000 outlets throughout the world.

A NIGHT WITH THE SNAKE AND MONGOOSE

Legendary drag racers Tom "The Mongoose" McEwen and Don "The Snake" Prudhomme
will host a night of bench racing and tall tales at the Wally Parks NHRA
Motorsports Museum , presented by the Automobile Club of Southern
California  on Thursday, Feb 7 at 6:30 pm—right before the CARQUEST Auto
Parts Winternationals.

The two will show highlights from Once Upon
A Wheel: Match Race , their new DVD.  Tom and Don will also be joined by
some special guests who raced alongside them over the years.  All the proceeds
from the event, which will include a full dinner and memorabilia auction, will
go directly to support the Museum. 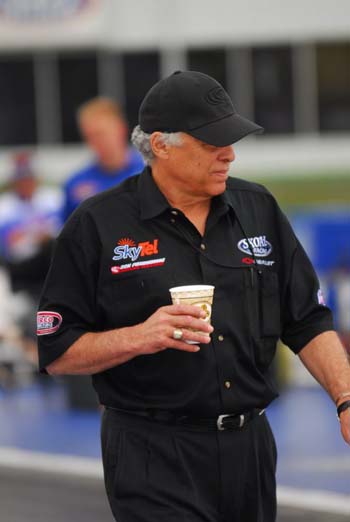 Wyndham Vacation Ownership, the world’s largest vacation ownership
company and a member of the Wyndham Worldwide family of companies
(NYSE: WYN), announced today it has revved up its presence in the motor
sports industry by creating a partnership with Don Prudhomme Snake
Racing, owned by legendary National Hot Rod Association (NHRA) driver
Don Prudhomme. The company, through its Wyndham Vacation Resorts brand,
will partner with Snake Racing on a series of marketing promotions
leveraging Prudhomme’s popularity with NHRA fans across the country.

“Don Prudhomme and his Snake Racing team have built a tremendous
following with NHRA fans due to their storied history of victories and
championships,” said Franz Hanning, president and CEO, Wyndham Vacation
Ownership. “This is an outstanding opportunity to align with an
indisputable racing legend to raise awareness of our brand and showcase
the myriad benefits of vacation ownership to motor sports fans
everywhere.”

The partnership between Wyndham Vacation Ownership and Don Prudhomme
Snake Racing will be visible at several NHRA events in early 2008. Fans
at NHRA events can enter for a chance to win The Experience &
Vacation of a Lifetime Sweepstakes where the grand prize is a trip to
the 10th Annual SummitRacing.com NHRA Nationals in Las Vegas. The prize
includes a chance to meet Don Prudhomme, two race weekend VIP passes,
two 30-lap Experiences of a Lifetime at Richard Petty Driving
Experience at the Las Vegas Motor Speedway, accommodations at the
Wyndham Grand Desert resort and airfare for two adults to Las Vegas.

BERNSTEIN TEAMS UP WITH SUMMIT RACING

"Obviously, Kenny Bernstein is a drag
racing legend and his race team, Kenny Bernstein Racing, is a first-class
operation," Kirk Heinbuch, Summit Racing Equipment Motorsports and Events
Manager, said. "Kenny, Brandon, and Tommy have all won Summit Racing
Equipment-sponsored NHRA events, and we look forward to sharing the winners
circle with them again as members of Team Summit."

Brandon Bernstein has
earned 17 career victories, 23 final round appearances, and 11 number one
qualifying positions. In 2007, he notched five wins and finished third in the
NHRA's "Countdown to the Championship. "Brandon has been successful both as a
driver and as a spokesperson for NHRA drag racing," Heinbuch said. "We know he
will be an excellent representative of Summit Racing Equipment,"

Rockingham Dragway owner Steve Earwood has announced the most ambitious
schedule in his track’s 36-year history with competition on 123 days
encompassing 78 different events.

The track unofficially opened on Jan. 5 for a test-and-tune session and
will play host to its fourth such event this Saturday.  First major
spectator race at the Carolinas’ fastest track will be the third annual
nitrojam.com Spring Blast featuring Pro Modifieds, Pro Stocks, Top Fuel
Dragsters and Funny Cars in pre-season testing, Feb. 21-24.

“I think the 2008 schedule has more variety than ever,” Earwood said.
“We’ve got feature events like the the ADRL’s Dragstock V Pro Mod race,
the AHDRA’s Screamin’ Eagle Nationals for the Harley-Davidson
motorcycle fans and the two IHRA events (the Spring Nationals and the
Knoll Gas World Finals), but we’ve also got races for the weekend racer.