Mon, 2007-10-15 10:27
The details of the Julie Russell lawsuit versus the NHRA and Goodyear was
settled last week, but details of the settlement will likely never be known
outside of the litigation circle.
Torco’s CompetitionPlus.com confirmed with a member of the NHRA’s
management team that the case had been settled before the court case was
scheduled to begin on Monday.
We spoke with Julie Russell’s trial attorney, Judd Waltman, who spoke to
us on her behalf. He confirmed a settlement was reached, but declined to discuss
the details.
“We were supposed to go to trial on Monday and didn’t go,” Waltman said.
“The case was resolved.”
Waltman said he could speak in a limited manner on the NHRA’s side but
was unable to comment at all on the Goodyear portion of the suit.
Was there a financial settlement from the
NHRA?

Drivers in both classes accumulate
points through qualifying position at each Knoll Gas Nitro Jam event. The
drivers must display the proper decals on their car to accumulate points. The
new Shootout and Showdown structures will be in place through the 2010 Knoll Gas
Nitro Jam season.

IHRA president Aaron Polburn is
thrilled with Torco’s increased commitment to these
programs.

After three days of
exciting racing and memories, the California Hot Rod Reunion wrapped up as the
sun set on Sunday evening.

The Ford Motor Company will add some flair to this year's Warriors in
Pink campaign by enlisting celebrities to join them in the fight
against cancer by decorating and signing mini Warriors in Pink
Mustangs. These 1/18th-scale models of the recently-launched 2008
Mustang with Warriors in Pink packaging will be auctioned off on
eBay.com from October 15 -25 with all proceeds benefiting Susan G.
Komen for the Cure.

The Force family has joined the fight
against this deadly disease by adding their own personal mark on the
mini-Mustangs. For more information on the auction, please go to
www.ebay.com/warriorsinpink. John Force's wife Laurie and daughters
Ashley, Brittany, and Courtney have added their touch to each of the
cars available in this special auction. 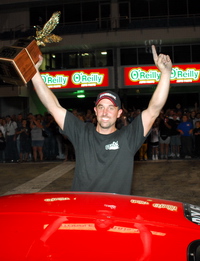 Scruggs was the only driver to double-up at the World Finals, finishing
his stellar weekend with a 3.870 to 3.933 win Saturday night over Joey Martin in
the Pro Extreme final. His closest call of the day came in the semifinals, where
Frankie Taylor ran a stout 3.81/197.05 but still lost to Scruggs' 3.79/202.88 in
what was the quickest side-by-side pass in ADRL history. 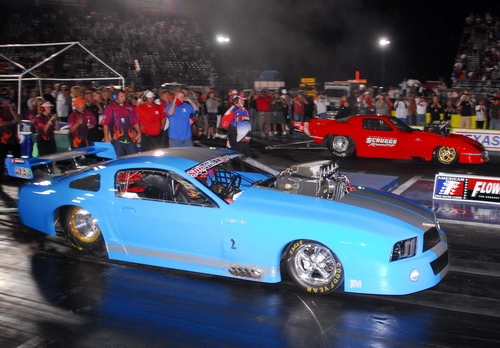 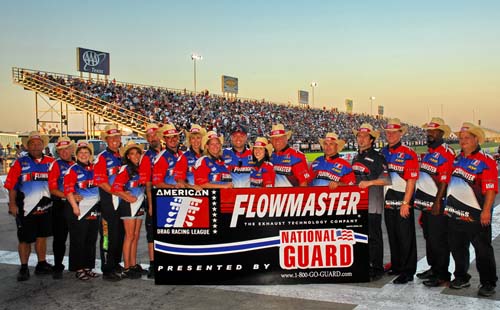 "The partnership between
the Guard and the ADRL is a completely natural one. That's because the future of
the Army National Guard, as well as that of the ADRL, rests with the young men
and women across our nation, who are well-educated, excited by emerging
technologies, and highly motivated to do great things for themselves and for the
greater good of our communities," said MAJ Michael Baptista, Chief of
Advertising for the Army National Guard. "The men and women who compete in the
ADRL are incredibly brave and courageous, which are the same traits that embody
a National Guard soldier." 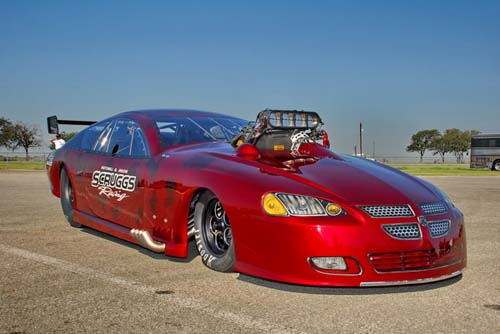 "Steve Austin, astronaut, a man barely alive. Gentlemen, we can rebuild
him, we have the technology. We have the capability to make the worlds
first Bionic man. Steve Austin will be that man. Better than he was
before. Better. Stronger. Faster."

That was the intro to the legendary television series The Six Million Dollar Man, a story that chronicled the
adventures of Steve Austin, a cybernetically enhanced astronaut turned
secret agent employed by the OSI under the command.

There's
nothing secret about newly crowned ADRL champion Jason Scruggs and his
200 mile per hour exploits in ADRL competition. There's nothing about
him that needs to be rebuilt, either.

His Dodge Stratus -- that was another story.

Scruggs capped a
sensational season by beating Joe Baker for the Pro Extreme title, 3.850 to a
troubled 7.79. During the 2007 season, Scruggs won his first career national
event title (Huntsville), continually lowered the ADRL's Pro Extreme performance
records (which now stand at 3.703 and 205.22 mph), and finished third in the
AlphaTrade Battle for the Belts points standings. He was dominant during
Friday's three-round competition, posting runs of 3.781/203.80 and 3.768/203.65
to win his two preliminary rounds before the final.

Hancock, 17, won the
Pro Nitrous title from the eighth and final qualifying position, beating
top-seeded Johnny Pilcher and Terry Housley to reach the final. He had his best
run of the event in that race, posting a 4.029 to turn back 2006 ADRL world
champion Keith Baker's 5-second run and deny Baker consecutive ADRL
championships. With the Belts title, Hancock became the youngest-ever winner of
a major drag racing championship. Ironically, Hancock came dangerously close to
not qualifying for the Belts field at all, needing a semifinal finish at
Dragstock IV in Rockingham to finally clinch his spot.

The York Nostalgia tradition continues with the presentation
of Musclecar Madness at the York Reunion and Nostalgia Nationals for a giant
weekend of racing history on July 11-13, 2008.

The Seventh Annual
event to be held at the Toyota Arena, , York Fairgrounds will have a
special “Tribute to Oldsmobile” as another trip down memory lane unfolds.  The Oldsmobile Club of will
provide solid representation of many facets of Oldsmobile history with racing
legends and legendary race cars in attendance.

The show is the only one of its kind in this country and is
visited annually by racing buffs from all over the and abroad.  The show is featured in the December issue of
Hot Rod magazine, as well as other national magazines.

The Legends of Drag Racing will converge on the show for
their traditional visit to the show for their annual reunion celebrating the
many historic moments that occurred at the York Dragway one of the nation’s
greatest facilities in the ‘60’s and ‘70’s and site of the largest one day drag
race in 1965.