SCELZI, CAPPS BUMP TEAMMATE BECKMAN ON DRAMATIC FINAL DAY OF THE COUNTDOWN TO 4 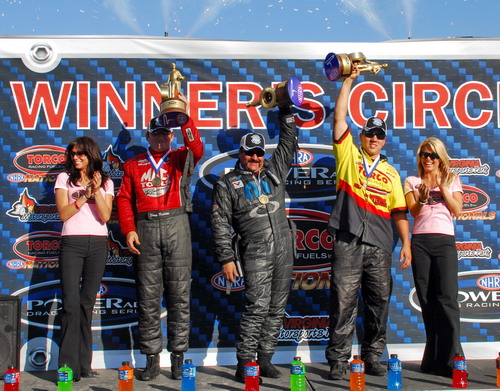 Kalitta wins first race of 2007; Connolly wins fifth in a row, enters Countdown to 1 as No. 1 seed in Pro Stock

Four-time POWERade Series champion Gary Scelzi punctuated a dramatic
final Sunday in the Countdown to 4, the first round of the NHRA
Playoffs, with a huge victory at the Second annual Torco Racing Fuels
NHRA Nationals at Virginia Motorsports Park to claim one of the four
berths in the two-race championship.

Scelzi jumped from sixth to second place with the win over teammate Ron
Capps in the Funny Car final and he was joined in the winner's circle
by Top Fuel's Doug Kalitta and Pro Stock's Dave Donnolly, who swept his
way through the first round of the NHRA Playoffs with four straight
wins to earn the No. 1 seed in Pro Stock's Countdown to 1.

"Things are just clicking for us right now," said Connolly, who has won
five straight races overall. "It was nice to sweep the first leg of the
Countdown but we have two races left (in Las Vegas and Pomona) so
that's what we're concentrating on. This team will be ready. We tested
for two days before this race and we have a long testing schedule to
complete before we head to Vegas. The work is definitely not done."

Connolly's incredible winning streak in Pro Stock has now reached five
races, which ties him for the second longest run in class history
behind Bob Glidden's nine-in-a-row back in 1978-'79. Greg Anderson also
won five straight in 2004, as did Ronnie Sox in '70-'71.

Point standings following the Second annual Torco Racing Fuels NHRA Nationals at
Virginia Motorprorts Park, the fourth and final race in the Countdown to 1, the
first round of the NHRA Playoffs. The top four drivers advance to the Countdown
to 1, the two-race championship round.

FINAL ROUND RESULTS FROM RICHMOND

Sunday's final results from the Second annual Torco Racing Fuels NHRA Nationals
at Virginia Motorprorts Park. The race is the 21st of 23 in the NHRA POWERade
Drag Racing Series:

Shelly Payne crashed during the second round of AMS Pro Modified eliminations during the Torco Race Fuels NHRA Nationals in Richmond, Va. Opponent Tim Tindle aborted his run early and that very well prevented a two-car crash. Payne was walking around after the accident but later admitted to a local hospital for observation. She is expected to be released today according to a crew member on the team.

From newly crowned 2007 World Champion Josh Hernandez delivering a blazing
5.990/241.67 performance, to 2006 World Champion Jay Payne opening his
parachutes after 600 feet in his second qualifying attempt and failing to
qualify for the 16-car field, the AMS Pro Mod Challenge presented by Tindle
Enterprises, Inc. once again delivered an amazing show in front of packed
bleachers and standing-room only fans at the Torco Racing Fuels NHRA Nationals
in Richmond, Va.

Hernandez and his Howard Moon-tuned Tommy Lipar Racing
'68 Camaro were the highlight of the day, ripping off a straight-down-the-groove
shot that set both ends of the Virginia Motorsports Park record and brought the
crowd to their feet with cheers.

"That was a wild ride," Hernandez said.
"I know it looked good on the video and for the fans, but inside the car it was
all over the place. The nose lifted and dipped, and I was fighting it all the
way down. When I looked up and saw the numbers, I was really
amazed.

"What a testament to Howard and the team, but also this whole
class. The guys out here have really been pushing the limits, and have pushed us
so hard all year. My hat's off to all of them," he said.

On the strength of his 45th career No. 1 qualifier Saturday at the Second annual
Torco Racing Fuels NHRA Nationals, Tony Schumacher joined three other drivers in
clinching their berths in the Countdown to 1, the two-race championship that
marks the end of the NHRA Playoffs.

The Torco Racing Fuels NHRA Nationals is the
fourth and final race in the first round of the NHRA Playoffs, which will halve
the field of eligible championship contenders from eight to four. There remains
one spot open in the Countdown to 1 in Top
Fuel, three in Funny Car and two in Pro Stock and
those final berths will be set at the conclusion of Sunday's race, which begins
at 11 a.m. ET.

Michael Ogburn of Mission Viejo, Calif., won the $5,000 first place prize in the
Mopar Hemi Challenge held during yesterday’s JEGS Pacific SPORTSnationals at
Auto Club Dragway in Fontana, Calif. Ogburn drove his vintage ’68 Barracuda to
an 8.75 to earn the final round victory over John Rains of Santa Paula, Calif.,
who slowed the final. Rains also competed in last week’s JEGS Northern
SPORTSnationals in Columbus, Ohio, which was won by Charlie Westcott Sr.


“This was a great win for out whole team,” said Ogburn, especially our
engine builder, Harry Holton. Nobody knows more about making these [Super Stock
Hemi] cars run that Harry does. I’m just the lucky guy who gets to
drive.”

The Hemi Challenge was the highlight of an action-packed day
of qualifying and eliminations at the second annual Pacific SPORTSnationals, an
event that features more than 500 of the best NHRA amateur drag racers.

An NHRA official confirmed with Torco's CompetitionPlus.com today
that the civil case of Julie Russell versus the NHRA and the Goodyear
Tire & Rubber was settled yesterday. This comes just days before
the case was scheduled to go to court.

The NHRA official would only comment the case had been settled and declined to reveal any details.