Stack
Limited, based in Bicester,
United Kingdom,
is a leading global developer and supplier of professional-quality data
acquisition systems and instrumentation for automotive racing and other rugged
applications.  Stack’s products include
sophisticated modular data and video-logging solutions, integrated driver
displays, tachometers, and other gauges.
Alan Rock, Managing Director, and Trevor Tapping, Technical Director,
lead Stack Limited and will continue in their respective roles after the
transaction.

Mr.
King commented, “The product development capabilities of the Stack team are
renowned in the racing industry, and their brand is incredibly
well-regarded.  The combination of their
products and ours creates a powerful force in the critical function of
information management for race teams.
Alan and Trevor built a great business, and we look forward to providing
them the resources they need so they can focus on what they most enjoy –
building great products and growing their worldwide customer base by servicing
their customers beyond expectations.”

The record was backed up during the exciting final round of the make up
race of the West Coast Hot Rod Associations (WCHRA), Team Transit
Mix-Spring Nationals, which was rained out after one round of
qualifying earlier this year. It was a long wait of anticipation for
Paulauskis, Bluebaugh, and the Team to return to Bakersfield to back
the record after the rainout. Bluebaugh said the weather conditions
earlier in the year were just simply better and it was tough to try and
back the record in the summer heat.

In addition to setting a stout record, the Team Transit Mix Cavalier
took the win for the make up of the Spring Nationals and the win for
the concurrently scheduled WCHRA Team Racing Enterprises Midsummer
Shootout, which ran at the Famoso Dragway, July 13-14, 2007. It was a
fantastic double-header weekend for Team Transit Mix Sponsor Tom
Nelson, Paulauskis and Team WFO as the Cavalier worked through rounds
with precision. 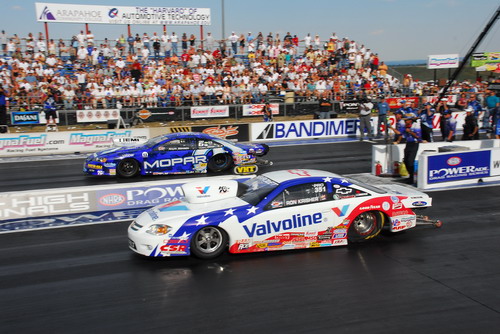 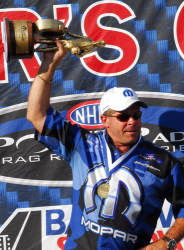 Allen Johnson's victory marked the fifth of his career out of 11 final
rounds. The last time he visited the winner's circle was Seattle of
2006.

No other win has meant as much to Johnson as this one did.

"It's just a fairy tale weekend," said Johnson, seated beside his dad
and team engine builder Roy, who had suffered a heart attack earlier
this year, and has recovered fully. "I'm sure Dad will second that. For
this being a Mopar event, we were the fastest car, No. 1 qualifier:
everything you can do we did this weekend and it feels really good."

What could have been a tragedy provided a reprieve from fate for the Johnsons.

"We were lucky we were in the right spot at the right time," Johnson
said of Roy's attack in Phoenix. "It worked out that he's more healthy
now than he was before then. So, you can tell he's smarter (because of
the way the car's running.)

"That one race was a setback for him and the team. We've just come back
even stronger and everybody's bound together and we tested our butts
off and they put in long hours at the shop on the engines and it's just
all starting to come together.

"We've been a win waiting to happen since the first of the year and
just hadn't gotten a break. In the finals we got a break. We probably
wounded our motor in the finals because we only ran 192 mph.
Fortunately, Ron broke a transmission, so there's the break we were
looking for. 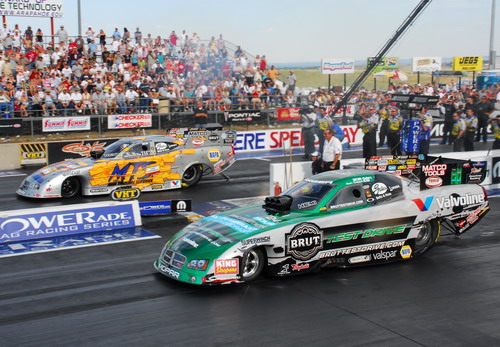 Sometimes you know it is your day, even when you feel like the weakest link in the chain. 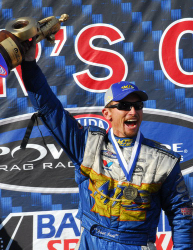 Jack
Beckman is winning races like a seasoned veteran but he's the first to
admit that he still has a lot of learning to do following yesterday's
win in Denver.

"I think our car and our team would have won three races by now," said
an elated Beckman. "I replaced Whit Bazemore (last year for the last
five events). Tomorrow he can get back in and be one of the top three
Funny Car drivers. And I'm on a steep learning curve. I've definitely
been the weakest link on the team. So, to get that first win of the
season, especially with the momentum that we've had over the last four
or five races, I don't know that it would have come at a better time.

"We were lingering down there around 10th or 11th (in points) and with
this [Countdown] format, I think it's three separate seasons: until
Indy, four races after Indy, the last two. So, you do look at it
slightly different, but the purpose is still the same. We want to win
every race we come to.

"I am so spoiled that I drive a car that could win every race we go to.
When I won Las Vegas last year I knew I was going to win that race. I
felt confident all weekend. [We] struggled a little bit this year."

Beckman added another chapter to his growing driver's manual. He learned what it takes to win on the mountain.

BEST ACTION NOT ON TV

Garry
Gerould may do some very interesting finish line interviews with the
winners of NHRA POWERade Series races for espn2, but what happens after
the cameras are turned off is often even better. Case in point: This
weekend’s Mopar Mile-High Nationals.

After Pro Stock Motorcycle winner Matt Smith had his face time with
Gerould, runner-up Angelle Sampey could be heard in the background
saying in a loud voice, “I’m getting’ sick of you, Matt.”

That was nothing compared to the tirade Top Fuel runner-up Whit
Bazemore launched into, with all of his venom aimed at teammate and
event winner Hot Rod Fuller. Bazemore climbed from his car and stated
in no uncertain terms to team PR man Ted Yerzyk, “This relationship is
over,” meaning whatever relationship he may have once had with
Fuller. Bazemore’s ire was based on Fuller’s having quickly lit both
staging lights at once.

There can be little doubt that the current qualifying
process of two runs on Friday and another pair on Saturday needs some
adjustment. In Pro Stock, for example, during the hotter summer months the
Friday evening session has become all important. Simply put, make a bad
run

Friday and the odds are that you’re going home Saturday
afternoon rather than Sunday.

In an effort to even out running conditions between the
Friday evening and Saturday sessions a number of plans have been put
forth. One that’s alleged to be a favorite of PRO president Kenny
Bernstein is to lock in the top 8 runners after Friday evening, and fill the
field with the final 8 from the best times on Saturday.

In other words, even if conditions prevent the kind of
elapsed times that might come up on the clocks on Friday evening from being
repeated on Saturday, the eight quickest runners in the third and fourth
sessions would still have a chance of racing on Sunday.

Nothing gives a drag racer
a feeling of relief more than getting the proverbial monkey off his or her
back. Prior to this weekend’s triumph at Denver,
Pro Stock Motorcycle competitor Matt Smith had reached seven final rounds and
won only once. This second victory will hopefully banish the pesky creature for
good.

That would give Matt a leg
up on his dad Rickie, who once fought a monkey in real life and didn’t fare so
well. But, we’ll get to that later in the story.

“I had to get that monkey
off my back,” Matt said in a post-race interview. “We can get to the finals but
just can’t seem to close the deal. We’ve had parts failures and stuff like
that.”

That sound you heard in the distance at Denver was Ron Krisher sighing.

Krisher emerged from the outhouse and climbed his way into the
penthouse by reaching his first final round of the season. This wasn't
a matter of falling into the final round. The Valvoline-sponsored
driver was the quickest in each round leading up to the finals.

The only thing keeping Krisher from making it a fourth consecutive was parts breakage.

If you thought Kenny Koretsky's performance last weekend was a fluke, he showed in Denver there's more where that came from.

Koretsky has now reached the semifinals in two consecutive races,
backing up his runner-up finish last week at Bristol with a semifinal
appearance in today's race. The self-proclaimed "Captain Chaos'
qualified No. 3 for eliminations and defeated Max Naylor in Round 1 and
Jeg Coughlin in Round 2 before losing to Krisher in the semis.