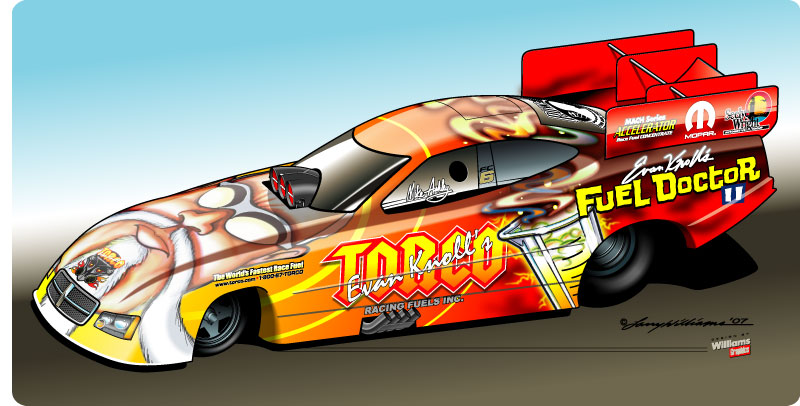 Chuck Ford has been Mike
Ashley’s crew chief long enough to expect a vision of the absurd from time to
time. In 2008, Ford will get a re-run of the 2005 season when his driver would
make a blazing run in his Evan Knoll-sponsored nitro Funny Car only to hop on a
scooter and race back to the staging lanes at breakneck speed in order to strap
into a supercharged, alcohol-burning Pro Modified entry.

Yes, Mike Ashley plans to
run a 24-race NHRA POWERade schedule in Funny Car but he also plans to run 10
events on the NHRA Pro Modified tour behind the wheel of a new 1968 Camaro.

Contrary to published reports elsewhere, Ashley has confirmed that he will be a
partner in a three-car team with Roger Burgess.

The game plan is totally
different than when Ashley ran as a single team en route to winning his second consecutive
championship in 2005. The focus is certainly on the present, but Ford adds this
plan goes well beyond the present.

Don Gillespie, longtime drag racing
photojournalist and former media relations manager for the IHRA, is working hard at completing
a third installment of his "Lions - The Greatest
Drag Strip" DVD series. Gillespie is gunning for an October 2008 release.

“I was recently able to
conduct on-camera interviews with Dale Pulde, Larry Reyes and Don Hardy,”
Gillespie said. “My Christmas present this year was a plane ticket. I will be flying
to in
two weeks to do same with Hayden Proffitt. After this past year's reunion I was
able to sit down with James Warren and Bones Balogh.”

This compilation of NHRA drag racing dates back to 1971 at Ontario
Motor Speedway. You will find an incredible YouTube compilation of
front-engine fuelers, Funny Cars and Pro Stocks. This six minute clip
is a great way to stir up the memory banks.

Within its continuing efforts in support of
Canada’s drag racing scene, DragRaceCanada is pleased to announce its
4th annual "Canadian Drag Racer of the Year" awards program designed to
recognize top achievements in Canadian drag racing during the past 2007
racing campaign.

The 2007
DragRaceCanada "Drag Racer of the Year" awards program will honor five
winners; one Professional driver, one Sportsman driver, one Crew
chief/Tuner as well as the Most Improved/Up-And-Coming drag racer. In
addition a new category has been added to the ballot this season –
Canadian Drag Strip of the year.

Covering all sanctioned drag racing but limited to Canadian drag racers only, the on-line ballot began on Jan. 1st, 2008 and will close at 23:59 on Jan. 31st, 2008.
After the polls close and the audit is completed the five winners will
be announced. All will receive on-line recognition as well as a
handsome commemorative “NitroMoose” trophy sculpture.

JEG COUGHLIN, JR. - A PRO STOCK CHAMPION, AND NEARLY A BOBSLEDDING ONE

Reigning POWERade Pro Stock champion Jeg Coughlin Jr. began his 2008 racing
season in unique fashion by participating in the third annual Chevy Geoff Bodine
Bobsled Challenge at the U.S. Olympic compound in northern New York. Piloting a
bobsled for the first time, Coughlin was one of five NHRA pros to take on
several NASCAR drivers in the charity event, which raises money for the U.S.
Bobsled team.

Although his experience sledding down a 19-turn course
where racers reach speeds in excess of 60 mph was nonexistent prior to the
practice sessions for this event, Coughlin took home a bronze medal in the
individual race featuring 10 NASCAR and five NHRA professionals. Coughlin was
also third-best in the NASCAR vs. NHRA Challenge.

"I was a little suspect
Thursday morning when we pulled up to that course and I started realizing I was
pretty much committed to this deal," Coughlin said. "It's one thing to say it
would be fun to drive a bobsled when you're sitting in your office back home but
quite another when you get there and see that massive hill.

"Some great
members of our national team took us under their wing and gave us a heap of
instruction and before you know it we were in sleds making our first few runs.
They started us down low and we made enough runs to get comfortable. Then we
moved up to Gate 3, where the women's teams usually start, and we raced from
there.

Defending Chevy Bodine Bobsled Challenge titlist, Boris Said reigned
supreme again as the ‘King of the Mountain’ as he won the NASCAR vs.
NHRA battle against drag racing’s powerhouse driver, Morgan Lucas.  So
far, Said, the son of former Olympic bobsledder, Bob Said has won all
three of the Bodine Bobsled Challenge races quite impressively.  Last
year, Lucas took home the silver medal in his first year participating
as Said grabbed the gold in last year’s edition of the event.

Going into the finals, Lucas experienced a problem with his Lucas
Oil-sponsored bobsled when the left rear axle holding the runner in
place snapped and ORDA officials were forced to use the Said sled
twice, with Lucas getting into an unfamiliar sled for the first time of
the weekend for his final round race.  Unfortunately for Lucas he did
manage a good time racing down the mountain to the tune of 52.06
seconds, but Said posted a quicker time of 50.99 seconds to outdistance
Lucas by the slim margin of 1.07 seconds.

“This morning I messed up my first run by overdriving a couple of turns
and that prevented me from accelerating, but I can tell you there’s no
disappointment whatsoever when you race someone with the credentials of
a Boris Said and all the NASCAR guys that came up here.  They taught me
to take the corners like a pro and it was a big deal with the NHRA guys
representing ourselves very well.” 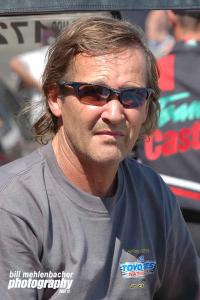 While he has been around fast machines most of his life, Ike Maier has only
raced for a handful of years.
“I guess you could say I’m a bit of a
thrill-seeker,” said Maier, who finished fourth in the Pro Modified Racing
Association (PMRA) in 2007, his rookie year. “About four years ago I went to the
track, saw the Pro Modifieds, and said ‘that’s what I want to do’.”

So after running in the OSCA Outlaw
Street class in 2006, Maier stepped up his racing endeavors, and now owns and
drives the Maier Motorsports 1969 Chevy Camaro-bodied Pro Modified. His
competition background includes motocross motorcycles and powerboat racing, but
he said driving one of the world’s fastest door slammers has taken him to a new
level of speed and acceleration.
Powered by an Atchison-prepared Alan Johnson
526-cubic inch blown engine in a G-Force Race Cars chassis, Maier continues to
get more comfortable and quicker passes each time he goes down the
track.

For the next three weeks, Torco’s CompetitionPlus.com will conduct
its inaugural War Stories Showdown presented by Mach Series
Accelerator. The veterans of yarn spinning are paired for what promises
to be a series destined to produce the finest behind-the-scenes
stories.

Morgan Lucas, the pilot of the powerful NHRA Lucas Oil Top Fuel
dragster, rallied in qualifying for the third annual Chevy Bodine
Bobsled Challenge presented by Whelen in taking the No. 2 qualifying
position with a total time of 1:48.25 (54.29 -53.96 seconds) just
barely behind perennial favorite, Boris Said by just a scant time of
.23-hundredths of a second.  Said paced the field with a quick run down
the mountain of 1:48.02.

“The qualifying runs went pretty well today with the exception of one
area of the track I had to fight,” said Lucas.  “I’m hoping they are
going to work on the sled tonight, but it’s still competitive by all
means.  Once I get turn 14 of the track figured out I will be a lot
better off.  When you come out of that section you have to keep the
sled low, but at the same time you want to keep it off the inner wall.
The problem I’m having right now is my sled wants to go too much to the
left in the chicane and it’s really hard to make go where I want.  It
slows you down a lot and breaks your momentum.”

It will be a busy race day for Lucas and his drag racing teammate, J.R.
Todd, the driver of the Torco Race Fuels/Seelye Wright Top Fuel railer,
who had a harrowing experience during his morning practice runs.