Sat, 2008-01-05 07:34
The Pro Modified Racing Association (PMRA) is pleased to announce Auto Meter
Products will be posting contingency awards at each PMRA series event for
2008.

“Having Auto Meter Products
on board with the PMRA again this season will be great for our series,” stated
Bruce F. Mehlenbacher, Director of Operations of the PMRA. “Auto Meter Products
is the most respected manufacturer of high quality, performance aftermarket
instrumentation, tachometers, and gauges, and we’re very happy to have them on
board once again.”
Auto Meter offers its customers the most extensive line of technologically
advanced, competition-inspired, and race-proven instruments of any aftermarket
automotive instrument supplier in the world today.

A new, limited-edition 1/16th-scale ceramic sculpture of the famed Hirohata
Merc built by Sam and George Barris for Bob Hirohata in 1952 is the latest
addition to the growing catalog of exclusive memorabilia from the Wally Parks
NHRA Motorsports Museum, presented by the Automobile Club of Southern
California.

Barris, the iconic auto designer dubbed "The King of the
Kustomizers," crafted the legendary Hirohata Merc from a brand-new 1951 Mercury
sedan that was heavily modified prior to the '52 Motorama custom car show in Los
Angeles.

Based on dimensions, photographs and details taken from the
original car while it was on display at the Parks Museum, the creation by
renowned sculptor Joel Dunford of Carllectibles is "striking in both its styling
and attention to detail," according to Tony Thacker, executive director of the
Parks Museum.

For the next three weeks, Torco’s CompetitionPlus.com will conduct
its inaugural War Stories Showdown presented by Mach Series
Accelerator. The veterans of yarn spinning are paired for what promises
to be a series destined to produce the finest behind-the-scenes
stories.

ENCORE: THE WILD BUNCH – BORN TO BE WILD

The mere notion of anchoring supercharged, alcohol burning engines within the confines of a full-bodied doorslammer was a practice described as volatile, but that didn’t stop a dedicated group of thrill-seekers from pursuing the rush. Their self-appointed name, the Wild Bunch, was an accurate description of the image they conveyed. How else could you explain a group that would dare bolt a blown, alcohol burning motor into a Chevy Luv Truck, a Nissan 300 ZX or if those weren’t radical enough, a Jeep CJ-5?

What started out as a group of guys choosing to be different in bracket racing, quickly evolved into a lucrative match race circuit and the inspiration for the Top Doorslammer class in Australia. Their finest hour resulted in the first six-second doorslammer pass in drag racing history.

Their unpredictable nature made them an immediate hit for the fans in the Mid-Atlantic region of the United States as well as the rest of the country. Not only that, their antics also brought forth heaping amounts of publicity within the various drag racing magazines.

Kenny Koretsky's Motorsports Director Doug Davenport called Torco's
CompetitionPlus.com because he wanted to let our readers know that
rumors floating around suggesting that Koretsky has sold the team and
quitting are exactly that -- rumors.

"How are we quitting if we
are moving ahead 110%?" Davenport asked. "We've got all kinds of new
engines and cars coming, so rest assured we'll be racing this season." 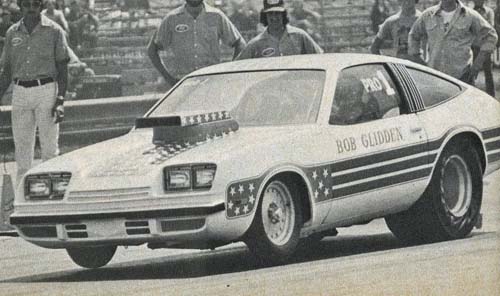 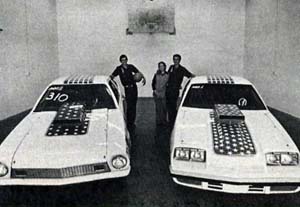 Bob
Glidden was so angry that he could have chewed an engine block in half.
His potent and competitive Ford combination had been hit yet another
time by the pounds-per-cubic inch parity regulators. However, this time
they’d gone too far and Glidden was prepared to point that out. He
would use the next national event, the prestigious 1976 NHRA U.S.
Nationals in Indianapolis as his pulpit to preach a message.

Torco's CompetitionPlus.com has confirmed with veteran nitro team owner
Jim Dunn that he will return in 2008 and will do so with a new sponsor.
He's not spilling the beans as to the new backer is, but says the
forthcoming contract will provide enough capital to run a 24-race tour.
Stay tuned as details are forthcoming.

Remember those old days when the Munsters had their famous Dragula
dragster? This YouTube clip dates back to the old Lion's Drag Strip.

On June 1, 2007, representatives from the Carrier Brothers, Andy and
Mark, announced that Scott Griffin had purchased their Top Fuel
operation. Six months later the Carriers have filed suit against
Griffin alleging breach of contract and the passing of bad checks.

Mark Carrier confirmed the lawsuit on Wednesday in a telephone
interview with Torco’s CompetitionPlus.com. The suit was filed on
December 21, 2007.

"We are in a federal lawsuit for breach of contract,” Carrier said.
“Filed in Brownsburg, Indiana – in federal court. Bad check writing,
not paying bills and a lot of stuff.”