"Given the great pride the program brings our soldiers and everyone
associated with the U.S. Army Pro Stock Motorcycles, this was not an easy
decision to make," said Col. David Lee, Director of Strategic Communications.
"We do, however, remain committed to NHRA and its fans who continue to support
our program and soldiers and look forward to continuing our sponsorship of the
DSR Top Fuel team."

The 2007 NHRA U.S. Nationals was quite an event this year for Mickey Thompson.
In preparation for the event, Mickey Thompson put together a special “Bounty
Reward” Program through which they awarded each racer winning on Mickey Thompson
tires with a special prize of $2,500. 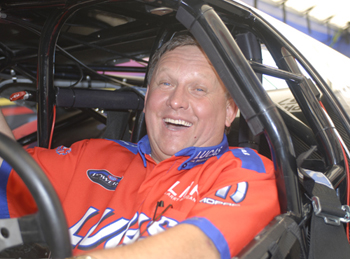 The driver of the Lucas Oil Dodge qualified for the first-ever
Countdown, and also made the Indy show in the seventh position – quite
a feat considering the conditions and the caliber of the competition.
The Ohio engine builder’s Hemis are in high demand, although his own
was the only to qualify for today’s eliminations.

With so much pressure on the Countdown competitors, Morgan may be the
exception when he says about that supposed pressure, “No, I’m not
feeling any at all.  We came here and we’re going to do the best we can
do.  I’ve been doing this for a long time and if you put pressure on
yourself you’re going to make a mistake.  I just hope we don’t make any
mistakes.

“We’re here to win every race, and we surely would like to do something
in the championship.  I think it’s great at this point. I just wish
they had 10 cars in it.  I think it would be more fair to have 10 cars
in it.  I know that they kinda got the concept fro NASCAR, and they
started with 10 and now they’re at 12, I believe.

So, maybe since NHRA are followers, maybe they can follow that plan. 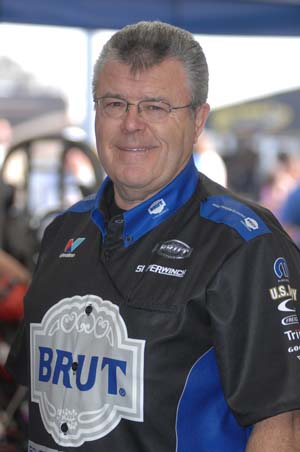 The Ace is back! Actually, Ed "The Ace" McCulloch, the legendary drag
racer, never left. McCulloch, who is the Grand Marshal of the
Automobile Club of Southern California Hot Rod Reunion, presented by
Holley (Oct. 12-14, Bakersfield), is still heavily involved in drag
racing, serving as crew chief for the Ron Capps-driven Don
Schumacher-owned Brut Funny Car.

McCulloch who moved to Oregon from central California at a young age
earned his "Ace" nickname early in his career when he outran the
self-proclaimed "King of the Northwest," Jerry Ruth. In the 1960s he
drove a series of dragsters, the most notable of which was the
full-bodied, Fuller-chassied Albrich-McCulloch-Floyd Northwind. The Car
led "The Ace" to the number one spot on the Drag News "Mr. Eliminator"
list from Pete Robinson in 1965.

Funny Cars were becoming popular in the late '60s and McCulloch
relished the constant match racing that was available to them. He won
the first time he raced at the U.S. Nationals in 1971. In the early
'70s, Ed's Revellution Duster won five of seven finals. In 1980 he won
his third Indy in the Super Shops Funny Car. Joining Larry Minor's team
in 1983 he appeared in at least one national event final round every
year until his retirement from behind the wheel in 1993.

THE CARS WE USED TO DRIVE

Special thanks to longtime Torco's CompetitionPlus.com friend Karen
Raffa for a link to one of the best classic car presentations we've
seen.

The presentation is a little lengthy but chances are you'll be hooked from the first graphic.

THE CARS WE DROVE

Change is inevitable. It’s
safe to say this year in Funny Car we’ve already heard more about chassis
changes than we did in the last decade.

There are two influencing
factors in today’s racing world – safety and performance.

In this scenario, the
issue appears to be more of a performance issue.

“I think it boils down to
some drivers switched over to the slip-tube chassis because we though they were
easier to drive,” Gary Scelzi said. “Now some of the drivers are switching back
to the solid car.”

There are two chassis
being employed in today’s Funny Car division – the age-old rigid and the new
kid on the block, the slip-tube chassis.

The difference between the
two is that rigid, as implied, has all of the junctions welded and doesn’t move
to a great degree while a slip-tube car has sleeves around the frame rails at
the tube junctions. The uprights and cross members are welded to those sleeves
which are free to rotate around the rails thus making the chassis more limber.
Those sleeves are located longitudinally by short sleeves that are welded in
place at their extremities so that the chassis does not flex beyond pre
determined limits.

THE TOLIVER, AUTOZONE AND ROCKSTAR CONNECTION

What is being called the “biggest payday in drag racing”
will play out to hundreds of bracket racers over the September 27-30 weekend at
Memphis Motorsports Park and has become known by many as simply “the Million.”

The Comp Cams Million Dollar Race, 12th edition,
is once again being presented by Alabama racing promoter Comp Cams and George
Howard, who came up with the idea of paying $1,000,000 to one winner of a
special bracket race for electronics-equipped cars that is based on the total
number of cars entered. If there are 500-plus cars entered, the full million
bucks will be awarded to the winner on Saturday, September 29. Entry fee for
the Million is $2,000, with $500 buy backs available first or second round.

Several months ago before the start of the 2007 Pro Modified Racing
Association season, Bruce Boland let it be known he was going for the
points race and the championship.

Early in the season, the veteran had some traction and driveline
issues, but once the car was sorted out, Boland was able to pull some
impressive numbers with the new ERD powerplant.

During the final PMRA event at the Grand Bend Motorplex over the Labor
Day weekend, the Hamilton, Ontario driver qualified for the show, and
when he made it to the semi-finals, he had amassed enough points to
take the title.

“I got my ring,” he said after running in the final round, and just
losing the race to Joe Boniferro of Niagara Falls, Ontario. “It was a
close race, and I gave it my all,” he continued. “I may have not won
the race, but I’m happy to take the title.”