Wednesday, December 5, 2007 will bring hot rod heaven at the Prolong®
Twilight Cruise Night at the Wally Parks NHRA Motorsports Museum,
presented by the Automobile Club of Southern California. Hundreds of
1970 and earlier rods, customs, classics and muscle cars will fill the
parking lot at the Fairplex in Pomona to participate in Museum’s annual
toy drive, which benefits Inter-City Volunteers, a non-profit charity
group. Bring an unwrapped gift to the event. Gifts for underprivileged
teenage girls are requested. Plus, cars will be selected by guest
judges for the Budweiser Celebrity Picks Awards. 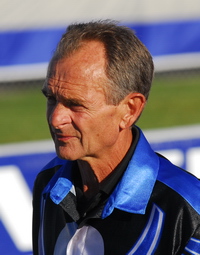 Those who know Glidden are very much aware that he’s a straight-shooter
regardless of how much money is on the line. He’s never political correct – just
brutally honest.

Glidden has shown, as a crew chief, that if a driver doesn’t do justice to
the art – he’ll point it out. On the flipside of that point, when one excels
tremendously, they’ll draw his praise.

Glidden said it was no coincidence that Humphreys reached the Pro Stock final
round at the NHRA Finals in Pomona, taking out Greg Anderson along the way.

“He’s got it,” Glidden said Tuesday via a telephone interview. “You can count
on one hand the number of those drivers out there today that have it and he’s
one of them. All he needs is a fast car and he’ll win more than his share of
races.

DOLL TO DRIVE FOR S&W

Wed, 2007-11-28 08:13
S&W Race Cars has announced Doug Doll Jr as the driver of S&W's Super Comp dragster
for 2008 and 2009.
Doll, the 2001 NHRA Division 1 Image of Youth Award winner
has proven himself a winner on track too, winning the 2007 Division 1 Open
Series Championship and finishing 4th in the division points.  A many time winner on the National and Divisional
circuits, Doll will be competing at all NHRA Division 1 Lucas Oil Drag Racing
events and in the Open Series as well as at selected NHRA & IHRA National
events through 2009.   He is also an accomplished bracket racer too, so don't
be suprised to see him at some of the big dollar events in 2008.

Racingjunk.com's has named its three finalists for $55,000 in sponsorship monies as voted on by the readers of the website.

Funny Car driver Jack Beckman gets the opportunity on Friday to address
a group of Santa Monica YMCA After Schoolers with his testimony of his
life experiences.

Beckman will be speaking on behalf of the Racers Who Care group Friday,
November 30, 2007 with personalized Quick Tips on Winning in Life,
based on his own life/career experiences.

It's that time of the year when Torco's CompetitionPlus.com provides
the drag racing community with their annual WHAT'S NEW FOR 2008 gallery
of pictures and renderings.

REQUIREMENTS --  jpg or gif
format, driver and team owner information, address and pertinent info
about the car such as engine, chassis builder and classification.

If you would like to submit your new car photo or rendering, please send it to email to NEW CAR STUFF.

A hurricane
survivor – can he overcome budget cuts?

Richie Stevens sent an
email to his major sponsor Mopar thanking them for sticking with him despite a
tough 2007. That was two weeks ago when the New Orleans, Louisiana-based driver
believed he had a program for 2008.

Stevens wasn’t being
naïve. He said he was told by Mopar that his program was moving forward in
2008.

Stevens admitted that he
never got a reply to his email.

Late last week, Don Schumacher Racing and
Stevens fell victim to budget cuts to the Mopar’s motorsports program,
reportedly handed down from the highest of the upper management.

The drag racing budget was
slashed 30%, making the team Stevens drives for expendable.

That’s what Bruton Smith alluded
to in a recent press conference when asked if the track would be ready for the proposed
date. Two crews, working 16 hour shifts, are reportedly prepared to have the
track ready by spring.

Every spring racers travel from across the country to
Rockingham Dragway with a definite purpose in mind…to see how their engine
combinations and off-season work will pay off once the racing starts for real.
The Nitrojam.com Rock Spring Blast presented by Richmond County Tourism is
expected to be one of the largest organized test sessions in the country and
will bring drivers from all over the United States and Canada.

“The Rock Spring Blast is a great opportunity for
drivers and crew chiefs to see how their off-season work will pay off,” IHRA
president Aaron Polburn said. “You can run on the dyno all you want, but you are
not ready for the season until you make a few laps on a national event-level
prepped racing surface. This event will tell you a lot about where you stand,
what you need to work on and what you have done that will be
successful.”

The Spring Blast is a four day feast designed with the
most ardent gearhead in mind. The top doorslammers in the country will be joined
by new and established sportsman cars to give the race fan everything he or she
could want. Feb. 21-22 will feature testing in the Pro Stock and Pro Modified
classes while all other pro entries will be welcomed to take a shot or two at
the racing surface at Rockingham Dragway. Feb. 23-24 will be a free bracket race
for all sportsman competitors as well as a Chicago Style race in the
professional classes.

Two drivers from each of seven categories - Drag Racing, Open Wheel,
Stock Car, Road Racing, Short Track, Touring Series and At Large - will
be selected to the first team by the members of the motorsports press
association. Two second team drivers from each category also will be
named.  The remaining drivers in each category receiving five percent
of the vote will receive honorable mention status.