NHRA Funny Car driver Ashley Force has
been named No. 10 in Yahoo!'s Top Trends in Search for 2007 in the
sports news category, it was announced recently by the global Internet
site that is among the most trafficked Web destinations worldwide.

Force finished 10th behind a host of other major sports
newsmakers for the year, including NASCAR, tennis stars Maria Sharapova
and Serena Williams, the World Series winning Boston Red Sox, soccer
stars David Beckham, Christiano Ronaldo and Ronaldinho, the Chicago
Bears and the Super Bowl. Force was the only motorsports personality
named to the list.

Force, who earned the

Auto Club Road
to the Future award which recognizes NHRA's rookie of the year, became
the first female racer to advance to a final round in Funny Car in NHRA
history. She drove her Castrol GTX Ford Mustang to a 10th
place finish in the NHRA POWERade Series points standings, the best
season finish for a female driver in Funny Car history. Force, 25, is
the daughter of 14-time NHRA Funny Car world champion John Force. They
star in “Driving Force,” a popular reality show that airs on the
A&E Network.

An extension of one of the more rapidly expanding teams in NHRA drag racing,
David Powers Motorsports will launch a modern show car program beginning in
2008.

The unique Top Fuel dragster show
car will have two separate one-piece carbon fiber bodies featuring both the
Caterpillar (Rod Fuller) and Matco Tools (Antron Brown) paint schemes. The David
Powers Motorsports show car project began following the 2007 NHRA season and
will be completed in time for its first appearance at Fabick CAT/Linn State
Technical College near St.
Louis in January. The show car will be housed at the
team’s new race facility in Brownsburg, Ind.

Based on the results of a recent competitor survey, the Top Dragster
and Top Sportsman classes contested at all Knoll Gas Nitro Jam national
events will feature a 32 car qualified field in 2008.

Competitors
submitted a wide range of ideas and suggestions during this survey.
The majority of responders in each class wanted to move these fields to
32 car qualified fields.  24% of the competitors who responded to the
survey wanted to leave the class alone.  24% of the responders wanted
to have the class move to an “all run field” with a maximum dial, while
the remaining 52% wanted to return to a 32 car qualified field. 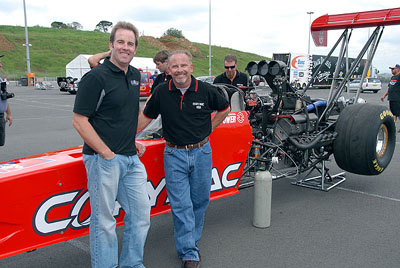 After entertaining various Sydney newspaper, radio and television media today at
Western Sydney International Dragway, American Top Fuel visitors Mike Dunn and
Cory McClenathan have declared their delight in racing against Australia's best
at WSID this weekend in a massive International Motorsport event for this
country.

"I was serious that I think Sydney would be an awesome venue to
stage a round of the NHRA series from the USA," remarked Mike Dunn - multiple
NHRA event winner in both Top Fuel and Nitro Funny Car in the world's elite Drag
Racing Series.

"This facility is as good as anything going back home in
America, I have no doubt the fans will get a great show this weekend and I am
very happy to be racing with Santo Rapisarda and the team."

Plans for the AMS Pro Modified Challenge are in the final phase and include a
repeat of the 2007 schedule and only a few small rule adjustments according to
Series Director Matthew Brammer.

"We're working on the contract with
NHRA, and hope to have that finalized shortly," Brammer said. "We're working on
some major, very exciting changes for the series but we want to solidify our
current program in the interim."

The plans for the series include
competing in ten NHRA national events, beginning in Gainesville, Fla. and ending
in Las Vegas.

DRM, the official magazine of IHRA drag racing and the
Knoll Gas Nitro Jam, will now be available online at www.ihra.com/dragreview. Issues #21
through #23, the final three issues of the 2007 season, will be free to all
visitors to nitrojam.com while registration with a membership number will be
required beginning with Issue #1 of 2008. You will be asked to enter an e-mail
address and zip code to view Issues #21 through #23.

Patience is a virtue in
most cases, but for crew chief Brian Corradi it isn’t – at least when it comes
to the safety of his driver.

Corradi, crew chief for
Mike Ashley’s Gotham City Racing team, along with co-crew chief Mark Oswald, have retained the services of Dr. Rory
Davis as well as Chuck Haase to test the safety of their chassis.

Corradi said they’ve delivered
a chassis already to Haase for a stress analysis this week.

“They are just testing to
see where we can improve on it,” Corradi said.

John Force is at least one
team that has said they plan on building their chassis in-house. Corradi said
Ashley’s
Racing doesn’t plan to take their program that far, at least not at this stage
in the game.

Wed, 2007-12-05 06:54
NHRA Pro Stock driver Dave Connolly is going from an idyllic off-season
Caribbean vacation to knee surgery Wednesday at Ohio State University's Sports
Medicine Center to repair torn cartilage in his left knee.
Connolly doesn't expect to spend much time in the hospital.  "I go in at 5
a.m. and out at noon," he said.  "I should be on crutches for four or five days
and I'll be going through physical therapy for the rest of the month. The doctor
said I should be good to go after therapy."
He tore the cartilage prior to this season and put up with nagging pain
throughout the most successful of his four Pro Stock seasons. The driver of Evan
Knoll's Torco Racing Cobalt for Victor Cagnazzi Racing won eight races --
including a record-equaling five in a row -- in nine final rounds en route to a
third place series finish. 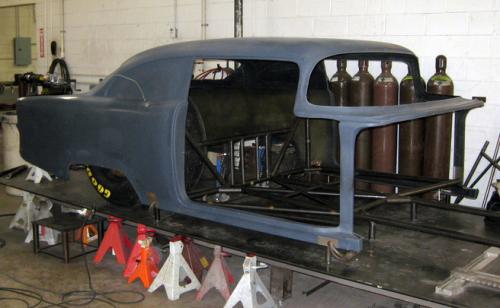 With each incarnation in a series of one-of-a-kind machines,
Charles Carpenter has pushed the meaning of the “World’s Fastest ’55 Chevy” to a
whole new level. The 2008 season will continue that trend, as Carpenter is set
to debut his latest and greatest ride yet: an ultra-trick, ultra-light ’55 Chevy
crafted by Terry Murphy Racecars in Blue Springs, MO.
After achieving a tremendous level of success over the last
several years in his iconic purple and yellow Tommy Mauney-built ’55, including
a pair of wins in the Flowmaster American Drag Racing League’s Pro Nitrous
division in 2007, Carpenter felt the need for a change at the end of the
season.