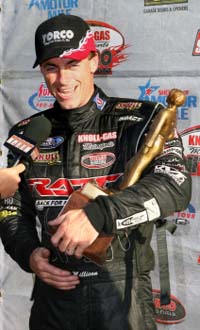 There was a familiar face
back in the Winner’s Circle at Maryland International Raceway. Six-time IHRA Top
Fuel world champion Clay Millican, who raced a full schedule on the NHRA tour
this season, came to Maryland International Raceway to defend last season’s
event championship. He succeeded, knocking off current points leader T.J. Zizzo
in the final round to claim his 51st career national event Ironman.

It was Millican’s first career national event victory with new Crew
Chief Johnny West, and he had to earn it. Zizzo, in a close race for the IHRA
world championship, threw everything he had at Millican, posting a 4.685 at
321.73 mph. Millican was able to edge him with a 4.576 at 325.85…a pass that
backed up his provisional record run of 328.14 set during Friday
qualifying.
“That was unbelievable,” Millican said after the final. “We
expected them to come out swinging, but never in my life did I expect them to
throw out a 6.68 at 321. That was a great final round and I’m really proud of
T.J. and his entire team. They had a big weekend, too.” 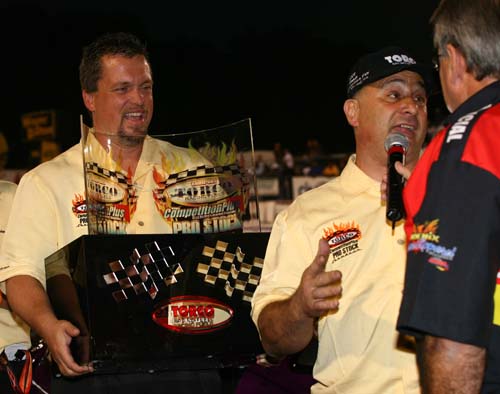 Former IHRA Torco’s
CompetitionPlus Pro Stock world champion John Nobile knew he had an uphill
battle headed into this weekend’s Pro Stock Showdown. He’s got another
challenge in figuring out how to spend the $20,000 that he won courtesy of Evan
Knoll, Torco Race Fuels and Torco’s CompetitionPlus.com Saturday evening.

“I couldn’t be any happier
than I am now,” said Nobile. “We knew we’d be a player, but things looked grim
after the first session and tried to piece things together after hurting the
engine. We wanted to come out here and just make things work.”

Nobile’s event started out
on a questionable note when he pulled through the gates at Maryland
International Raceway with no engine in his Ford Mustang. The Jon Kaase engine
that normally resides between the fenders of his car was damaged twice on the
dyno due to faulty parts.

Nobile said he knew just
getting to compete was a stand-alone achievement.

Wally Parks, the driving force behind the formation of NHRA, has died
at the age of 94. It was Parks’ vision, goals and unconditional
commitment to the need for speed and side-by-side racing in a safer,
more controlled environment that created what is today the world's
largest motorsports governing body.

"Today is a sad day in the world of NHRA and the sport of drag racing,"
said Tom Compton, president of NHRA. "Words simply can't describe the
immeasurable impact Wally has had on the sport he created and the
millions of people's lives he touched along the way. The name Wally
Parks is synonymous with drag racing, and his vision and direction will
guide NHRA for years to come.  Everyone in drag racing, and the
industries formed to service the sport, will forever be indebted to
Wally, his vision, his focus and his desire to create, build and grow
NHRA."

Sets both
ends of the world record in moving to the top of the qualifying sheet; Scott
Cannon also claims both ends of the Pro Mod record in Saturday evening
qualifying 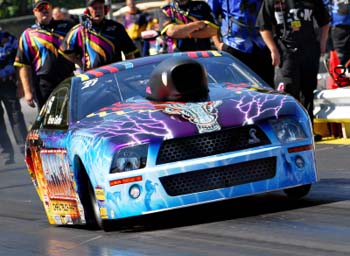 While the Nitro classes usually headline the Knoll Gas Nitro Jam, Saturday
evening at Maryland International Raceway the door-slammers took center
stage.
Brian Gahm (Lucasville, Ohio)
claimed both ends of the IHRA world record in the Torco’s CompetionPlus.com Pro
Stock class, clocking an astounding 6.281 at 223.95 mph, both records that were
already backed up earlier in the event, break the e.t. record set by Pete Berner
(Crete, Ill.) earlier in the Saturday session. The speed record was held by
Steve Spiess (Manhattan, Ill.) at 223.84 mph, also set earlier in Saturday’s
evening qualifying session.
Gahm ended up on top of the
qualifying list, heading the quickest Pro Stock qualifying field in IHRA
history. Daniel Seamon (Bellevue, Ohio) ended up on the bump spot with a
6.401

There was a reason that most every drag racing fan wanted a Lee Edwards t-shirt
in the 1970s – he was the driver to beat. Edwards dominated the class with an
iron fist in the formative years of the mountain motor
program.


Edwards
was considered one of the more prolific runners in those formative days of the
movement. He earned a living Pro Stock racing under both the NHRA and IHRA
banners throughout the 1970s.


“It
suited me well because I already had some big motors,” Edwards said. “I just
kind of fell into running the new style. Most of us had those big motors sitting
around for match races and it played right into our hands.”


The
new format fell into Edwards’ hands more than any other driver. He claimed the
first two world championships in convincing fashion, winning the 1977 title by
905 points and following up the next year winning by a whopping 3,111 points.


Edwards
is credited with 17 career finals, fourteen of which came after the mountain
motors were implemented. He only ran three years in the mountain motor
competition.

$50K ON THE LINE IN PRO STOCK SHOWDOWN

The heat will be on Saturday evening as eight of the baddest Torco’s
CompetitionPlus.com Pro Stockers battle it out for $50,000 in posted purse in
the Torco’s CompetitionPlus.com Pro Stock Showdown.
The first round pairings include defending event champion
Robert Patrick versus John Nobile; Defending class world champion and Pete
Berner versus Rob Mansfield; Steve Spiess versus Frank Gugliotta and John
Montecalvo versus Brian Gahm.
Patrick recorded the quickest elapsed time in the history of
the class en route to his 2007 Torco’s CompetitionPlus.com Pro Showdown victory
with a 6.312 elapsed time at 220.94 miles per hour.
Patrick enters this season’s event at the top-seeded entry
amongst the top point earners based on qualifying.

The third edition of the JEGS NHRA Northern SPORTSnationals kicked off Friday at
National Trail Raceway in Columbus, Ohio. The event, which features hundreds of
the best amateur drag racers from across the country, will continue through
Sunday, Sept. 30.

After one day of qualifying, Pro Stock racer Larry
Morgan is the surprise leader in Competition Eliminator. Morgan, a resident of
nearby Newark, Ohio, entered his Lucas Oil Dodge in the B/Altered class and
posted a run of 6.998, .672-seconds under the index. Morgan, who is one of the
eight Pro Stock qualifiers in NHRA’s  leads a field that includes former NHRA
champions Jeff Taylor, Bo Butner, David Rampy, and Sal Biondo. Other qualifying
leaders are Jeff Gilman (Super Stock), Rob Lloyd (Stock), Tommy Turner (Top
Sportsman) and Tom Elliott (Top Dragster).

Gillman, of Marne, Mich.,
posted a run of 8.82-seconds in his Pontiac Sunfire to lead the Super Stock
field. Team JEGS driver John Coughlin is currently seeded second in Super Stock
with his Chevy Cobalt. John Coughlin is also racing in Top Dragster and is
qualified 20th after one qualifying round. 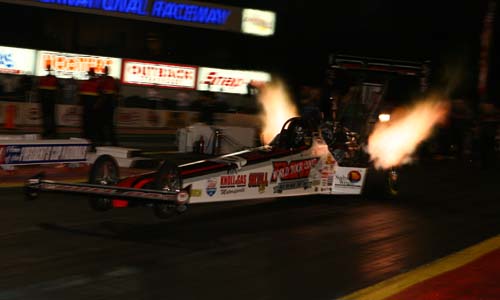 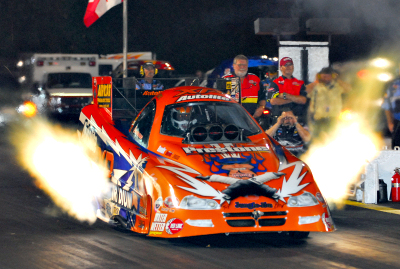 Clay Millican may not have run the entire Knoll Gas Nitro Jam series this
season, but Friday at Maryland International Raceway he felt right at
home.

The six-time IHRA Top Fuel World Champion, driving in just his
second Knoll Gas Nitro Jam national event of the season, jumped straight to the
top of the Friday qualifying sheet and provisionally broke Melanie Troxel’s mph
world in the process, clocking a 4.642 at 328.14 mph.