In a commemorative program hosted by GM Racing and the National Hot Rod
Association on Saturday, a group of 19 retired veterans from the Army Special
Forces Association, Randall Shughart Chapter 64, based in nearby Carlisle, Pa.,
took center stage at the 23rd annual Toyo Tires NHRA Nationals at
Maple Grove Raceway.

Throughout the year, SFA Randall
Shughart Chapter 64 members visit U.S. combat-wounded troops at the Landstuhl Regional Medical Center in Germany bringing words of hope and
good cheer, as well as souvenir gift bags with items donated by NHRA teams and
sponsors. They also conduct fund-raising events to purchase telephone cards,
clothing items and duffle bags for use by wounded/injured personnel at
Landstuhl, traveling to LRMC via SpaceA on U.S. Air
Force aircraft to distribute the items.
Earlier this year monies were raised by SFA Chapter 64 at the NHRA event
in Englishtown, N.J., by auctioning off a racing helmet
autographed by more than 40 NHRA drivers.

For the past two years, members from
SFA Chapter 64 have served as the advance team and on-site organizers for
"Operation Support Our Wounded," a postseason visit with American troops in
Germany by NHRA goodwill ambassadors
Warren Johnson, Jim Yates, Melanie Troxel, Tommy Johnson Jr. and Cory
McClenathan. The drivers are currently scheduled to return the weekend following
this season’s Auto Club of Southern California NHRA Finals in Pomona, Calif., but on Saturday, GM Racing and the
NHRA wanted to give a little something back to this special group of Green
Berets and say, "Thank you, for a job well done." 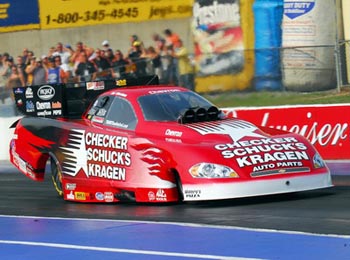 Funny
Car veteran Del Worsham began his last-gasp fight for the eighth and
final spot in the Countdown to the Championship by leading Friday's
action at the 23rd annual Toyo Tires NHRA Nationals at Maple Grove
Raceway.

Fighting for his playoff life, Worsham pulled out all the stops in his
Checker Schuck's Kragen Chevrolet Impala SS Friday, blasting to the
provisional pole with a 4.800 at 323.97 mph. Should Worsham stay No. 1
and win the race, and No. 8 points earner Jim Head -- who is qualified
seventh here -- retain his position and lose in the first round,
Worsham would make the Countdown to the Championship field by one point.

"I'm not going to say it's too little, too late, but I think we're down
to needing a miracle at this point," Worsham said. "We've had miracles
happen before with this team so we won't quit."

Brandon Bernstein didn’t
run today because of kidney stones. At approximately 10:30 a.m., he was
transported to the hospital complaining of severe pain.

Bernstein was admitted to
the Emergency Room and diagnostic tests confirmed a small kidney stone. The
attending urologist suggested the stone would pass with fluids and rest.

“We’re taking a ‘wait and
see’ approach,” said Kenny Bernstein. “If the stone is expelled today or
tonight, there’s a chance that
might be able to drive tomorrow. At this particular time, we have opted not to
do any type of surgical procedure which would mean he would have to undergo
general anesthesia, which would stay in his system rendering him unable to
drive this weekend.

Look for an official announcement to come forth later today, but
Torco's CompetitionPlus.com has confirmed that Mike Neff left Don
Schumacher Racing late Thursday to become a member of John Force
Racing. This completes a scenario that began in Seattle with Neff's
announcement to the Mopar/Oakley team that he was leaving to become the
fourth driver for JFR.

This weekend’s Pro-Am event in San Antonio, Texas, has been postponed due to the
imminent severe weather conditions expected from Tropical Storm Erin, which came
ashore near Corpus Christi Thursday morning.

The event has been rescheduled for next weekend, August
24-26.

The Renegades
double-event Summit Racing Equipment Pro-Am Tour presented by Mr. Gasket race
was scheduled for this Saturday and Sunday, August 18 and 19.

Thursday, August 9, 2007 could go down as a landmark day in Australian drag racing history.

That is the day that three months after news broke of businessman Shane
Gore's proposal to lift the marketing and promotion of professional
drag racing in Australia he finally met with ANDRA (Australian National
Drag Racing Association) officials.

Just a week prior, Gore was offered an olive branch by ANDRA CEO Tony
Thornton and invited to present his vision for the future to the
National Control Council during its Annual General Meeting. 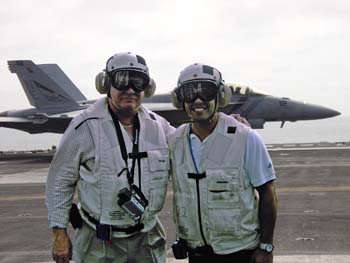 Chuck Beal and Brandon Welch of independent Nitro Funny Car team Beal
Racing were treated to an all-access stay aboard the US Navy’s aircraft
carrier USS Abraham Lincoln August 2nd and 3rd.  The trip included an
exclusive look at the inner-workings of a fully functioning aircraft
carrier, where the two learned how to bring large-scale leadership and
teamwork to drag racing.

Invited on the trip by Rear Admiral Len Hering, Commander Navy Region
Southwest, team owner Beal and driver Welch flew on a C-2A Greyhound
from NAS North Island in San Diego to the USS Abraham Lincoln, which
was conducting training in international waters off the coast of
Mexico.  The two, along with a group of a dozen community and business
leaders experienced an arrested tailhook landing aboard the carrier,
where the plane came to a dead stop from 140mph in only 2 seconds.

From there, the group toured all corners of the ship to see the amount
of organization, training and resources required to run a floating
American airstrip anywhere in the world.

PEAK® Antifreeze and Zizzo Racing will campaign a commemorative PEAK
Antifreeze Top Fuel dragster at the US Nationals at O'Reilly Raceway
Park in Indianapolis.

"The program celebrates PEAK's 60th anniversary and TJ's dragster will
be featured in special point-of-sale at O'Reilly Auto Parts stores
throughout September," states Old World Industries Brand Manager Brian
Bohlander.  "There is no better way to celebrate PEAK's 60th
anniversary as a quality American made product and its hot roddin'
heritage than through NHRA championship drag racing and the US
Nationals.  Its exciting to have PEAK back on a Top Fuel dragster, the
ultimate hot rod!"

An unimpeachable source
has confirmed with Torco’s CompetitionPlus.com that the NHRA has worked around
the clock in preparing the Maple Grove Raceway surface and the work appears to
have attained the desired results.

If
all you’re interested in are elapsed times, you can stop reading right
now.  But if you’re a speed demon, stick
with me.  It was round five of the South
African National Drag Racing Championships, at Tarlton International Raceway,
and the speeds were wicked.  How about
14.86 at 148 in an old Mazda pick-up, one so tiny that it nearly flops over
anytime anyone with a gut gets into it?
Or 12.20 at 172 in a ’72 Camaro?
Or 8.90 at 242 in a hot rod Bimmer (that’s right, a 320i with a blown
Chevy small block)?  Or, quickest and
fastest of the day, 6.94 at 330 in an alcohol funny car?  Monster speeds, all right, but I’ll come
clean. We’re talking kilometers per hour.

This
is drag racing in Africa, and kph comes with
the territory.  But it’s still a
quarter-mile, and racin’s racin’.  Any
American drag racer with a pocket calculator would have felt right at home.

Sanctioned
drag racing in South Africa
goes back to the 1950s, but, due to FIA rules, national championship events had
to wait until the country had at least two first class facilities.  One of them is Tarlton, which Mick van
Rensburg built in 1977.  Besides wanting
to give the sport a boost, he needed a place to run his alcohol and top fuel
dragsters and his jet car.  While his sons
have taken the keys to the family funmobiles - the dragster, funny car, and Pro
Mod - Mick still makes exhibition passes in the jet car.  At round five of this year’s national
championship, Mick was the perfect host, blasting his jet car down the track at
well over 200 mph, despite having to feather the throttle.