Thu, 2007-06-28 07:19
World renowned businessman and IHRA Alcohol Funny Car driver Peter Osterio
passed away Wednesday after experiencing a sudden heart attack.  Osterio, 53,
immigrated to the U.S. from Australia to pursue his passion for drag racing.  He
is survived by his wife Ann K. Marshall, and brother Brian Osterio.
Away from the track, Osterio, a graduate of the University of
New South Wales in Sydney, Aus., was a successful business man in the corporate
world, operating his company, The Osterio Group, which specialized in Business
Processes, Risk Control, Audits and Corporate Governance.  He gave numerous
seminars all over the world to corporate clients and was the author of five
books on business risk, control and audit.
Prior to moving to the United States, Osterio raced drag bikes
in his homeland of Australia.  While racing bikes he befriended the late Elmer
Trett of Top Fuel Bike fame, along with current Top Alcohol Funny Car racers
Steve and Jenelle Harker.

Wed, 2007-06-27 17:05
Twenty-six year-old Jeff O’Neill will make his competition debut in drag racings
ultimate category, Top Fuel Eliminator July 6-8 at the IHRA Cars RV & Marine
Rocky Mountain Nationals presented by Torco Racing Fuels at Castrol Raceway in
Edmonton, Alberta.  O’Neill, who hails from Pennsdale, PA is no stranger to the
driver’s seat or the winners circle, having honed his skills in sportsman
vehicles since the age of eight.
Back in November, O’Neill earned his Top Fuel competition license at the
wheel of Litton’s Lucas Oil backed machine, and has since patiently waited his
opportunity to compete at the sports highest level.  That opportunity presents
itself in Edmonton, as O’Neill will pilot a team car for former IHRA Champion
Litton.  O’Neill will be working with the same Litton team that gave 2006 NHRA
Rookie of the Year J.R. Todd his first opportunity behind the wheel, and also
aided multi-time IHRA Champion Clay Millican’s progression into the Top Fuel
ranks.

Doug Kalitta, Sr., the father of NHRA POWERade Drag Racing Series Top Fuel
driver Doug Kalitta and brother of drag racing legend Conrad “Connie” Kalitta,
lost his battle with cancer yesterday. He was 67. He passed away at his home in
Mt. Clemens, Mich.

Make no bones about it. The Snake loves Englishtown. You could tell
because Don “The Snake” Prudhomme fired up a cigar for the press
conference following his double win as a team owner during the NHRA Pro
Care Rx SuperNationals at Old Bridge Township Raceway Park.

“I don’t smoke these often,” Prudhomme said to the members of the media
as he fielded questions surrounding victories by Larry Dixon (Top Fuel)
and Tommy Johnson, Jr. (Funny Car).

As a team owner, he’s won five times in Englishtown and thrice in
Gainesville. Englishtown now has favored status as the site of his
second career “double-up.”

The first lawsuit was
filed in conjunction with the Selmer, Tennessee Cars for Kids tragedy, according to a CNN.com report.

Bruce Replogle, whose
15-year old daughter Scarlett Replogle was among six deaths attributed to the
accident, filed a lawsuit seeking $10 million in damages.

Authorities have reported
that Troy Critchley was performing a burnout during an annual parade and lost
control of the car, striking a utility pole and then bouncing into the crowd of
onlookers.

The NHRA has unified the weight minimum for all brands of PSM.

Effective immediately, the minimum weight for Suzuki, Buell, and
Harley-Davidson V-Rod Pro Stock Motorcycles will be 620 pounds. This adjustment
is based on race performance and on maintaining parity among the brands.
The next race for the PSM class is this weekend's POWERade Drag Racing
Series event in . 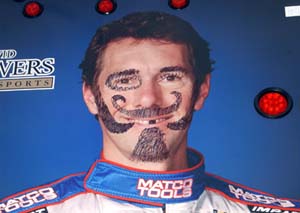 It wasn't exactly what we had in mind, but a new look adorned the back for Whit Bazemore on the back of the David Powers Motorsports trailer Monday morning in Englishtown. The vandal might have given Bazemore a black eye on the rig, but in all reality, he gave Englishtown one.

Television coverage of final eliminations of the O'Reilly NHRA Thunder
Valley Nationals presented by Q at Bristol Dragway has been expanded an
extra 60 minutes to create a three-hour block from the highly
anticipated NHRA POWERade Drag Racing Series event July 6-8. Sunday's
broadcast on ESPN2 will air from 9:30 p.m. to 12:30 a.m.

The ESPY Awards, for Excellence in Sports Performance Yearly, was
created by ESPN in 1993. Sports fans can vote for Schumacher and other
sports heroes in each of the different categories via an online poll at
http://espn.go.com/espy2007/#

Schumacher, driver of the U.S. Army dragster, finished the 2006 season
in dramatic fashion by winning his third consecutive and fourth overall
Top Fuel championship on the final run of the season. On that final
pass at Auto Club Raceway at Pomona, Schumacher set a national elapsed
time record of 4.428 seconds and defeated final round opponent Melanie
Troxel for the victory to claim the championship title by 14 points
over rival Doug Kalitta. Media quickly labeled his effort “The Run,”
and called it the most meaningful and memorable single performance in
NHRA history.

Schumacher’s historic championship-winning run put the finishing
touches on an unbelievable mid-season comeback, where he was more than
330 points behind the championship leader and basically written-off of
the championship list with less 12 races to go. From there he reeled
off five victories in eight final round appearances to clinch the
championship.

ONE ON ONE WITH ROB DOWNING 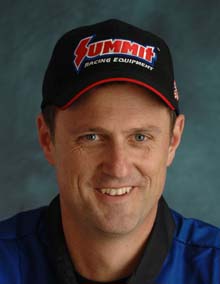 Although he may not be as well known as his counterparts in the nitro fuel
classes, Rob Downing, crew chief on the two KB Racing LLC, Summit Racing
Equipment Pontiacs, driven by Greg Anderson and Jason Line, is arguably
considered one of the top crew chiefs to come down the pike in recent Pro Stock
history.

The unassuming Downing took the longer road through college to
reach the pinnacle of his profession.   From college to Detroit designing
engines to Pro Stock crew chief, this crew chief has learned a lot about success
and winning combinations.  In 2007, he has his team on a strong pace adding (7)
wins to his résumé and leading the points chase for the NHRA POWERade Pro Stock
championship.  Prior to this season, Downing partnered with co-crew chief Jeff
Perley to propel the KB Racing LLC, Summit Racing Equipment Pontiacs, to 51 wins
and 4 championships.  These numbers have only been surpassed by a limited few in
the Pro Stock category and KB Racing with Downing is still counting.  He is
respected by his peers, crew, and most importantly his drivers and team owner
Ken Black.

Three-time NHRA POWERade Pro Stock champion Greg Anderson,
who hired Downing, had the following to say of his crew chief: “Rob is
everything.  He’s the heart of this team.  He’s the guy that makes all of the
decisions.  He is the guy who keeps us as egotistical drivers calm and
grounded.  He’s the captain of the ship and we couldn’t race without him.  We
couldn’t get to the race track without him.  He does it all, from the bottom to
the top.  He has a lot of job descriptions and wears a lot of hats.  We depend
on him an awful lot.