FUNNY CARS NO JOKE AT NHHR 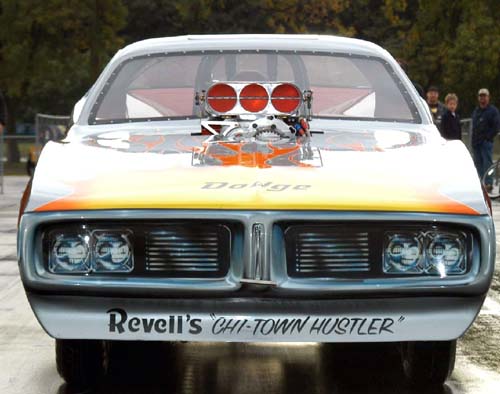 You could call them the "Elite Eight," you could call them the "Living
Legends," but whatever you call them, you'll not be calling them late
to the starting line as eight of the best-known, premier Nostalgia
Funny Cars run during the fifth annual Holley NHRA National Hot Rod
Reunion, presented by SoffSeal, June 15-17 at National Trail Raceway,
Hebron, Ohio.

Torco's CompetitionPlus.com has the first actual photos of the forthcoming RATT "Back for More" Top Fuel dragster driven by Clay Millican.

The dates and venue have been secured, and Torco Racing Fuels is
excited to announce their next installment of motorsports marketing
mayhem.

Starting on Friday night, June 1st, the Miss Torco Model Search will
debut at the Electric Cowboy Nightclub, located at 3249 S.W Topeka
Blvd. in Topeka, Kansas.  The event is set start in conjunction with
the O'Reilly NHRA Summer Nationals at Heartland Park in Topeka, which
runs June 1st-June 3rd.

"We are excited to be able to set this event in motion to coincide with
the Topeka NHRA event," said Jason Caldwell, director for the Miss
Torco program. "We plan to showcase some of our drivers in an autograph
session during the event at Electric Cowboy, and would like to invite
all Torco affiliates and fans to join us in a night of fun," states
Caldwell.  "I would like to thank Austin George and Scott Boggs of the
Electric Cowboy for joining forces with us on this event and giving us the chance to
entertain the awesome fans of the NHRA and Team Torco." Caldwell said.

Terry McMillen and his Amalie Oil InstiGator Funny Car, powered by Torco Race
Fuels will make a special appearance at the Prairie Heights Middle School in
LaGrange, Ind. on Friday May 18, 2007 from 9AM to 2PM. The McMillen and
InstiGator appearance will highlight the schools "Race Into Reading"
program.

While McMillen makes many appearances during the season, the
stop at Prairie Heights wouldn't be complete without a stop to Mrs. Hinkle's
class to see Heather Mills. Heather is the daughter of Richard and Sara Mills a
long time friend of the McMillen family.

ADRL ON THE TUBE

The first airing of results and highlights from the Georgia Drags will
be Friday at 8 p.m. EDT, with replays scheduled for at 11 p.m. Friday
and 2:30 p.m. Saturday. Each of the remaining ADRL events on the 2007
schedule will be shown on Inside Drag Racing following the same
schedule format.

ProCare Rx, one of the nation's largest prescription drug management companies,
is planning to fill a script for competitors in the AMS Staff Leasing Pro Mod
Challenge presented by Tindle Enterprises with a $50,000 payday, series director
Matthew Brammer announced Wednesday.

Beginning with the next Pro Mod
event, drivers will earn points for the $50,000 ProCare Rx Pro Mod Clash  -- a
"race-within-a-race" which pits the best-qualifying and most-consistent AMS Pro
Mods against each other with the chance to fight for a $25,000 top prize.


"Pro Mods are so amazing and they put on an incredible show, I wanted
to do something that puts an even brighter spotlight on these teams and cars,"
Roger Burgess, Chairman of ProCare Rx said.

He may not act like it, but really, he's the new guy. Not just on the
team, but in the category. Eddie Krawiec hit the jackpot when he was
chosen to be the new guy, so he's not complaining. After all, he was
one of many that were interviewed, poked, prodded and thrown on a
Harley-Davidson V-Rod and sent down a quarter-mile track to see who was
ready to ride the second entry on the Screamin' Eagle/Vance & Hines
Motorsports Harley-Davidson team. Make that, the three-time defending
NHRA POWERade Pro Stock Motorcycle championship winning team. Krawiec's
the new guy on that team.

But if anyone was built to be the new guy on a team with a storied
five-year history, it's Krawiec. He spent several years on the AMA
Prostar tour and battled for the championship there twice. He came up
just short (less than 10 points one year) but he learned how to
compete. He had even raced at a couple of NHRA events. He made
qualifying attempts at eight national events, but prior to this year's
season opener at Gainesville (Fla.) Raceway, had never qualified for
the show. Krawiec has also logged in a few years working at Old Bridge
Township Raceway Park in Englishtown, N.J. – a city he calls home in
the first place. He has spent a great deal of time working for and with

drag racers and has a keen sense of what it takes to run a historic
racing facility and how to keep racers happy and competitive.

After all that, Krawiec did the unthinkable. With years of racing
experience on and off the track, he decided to take a year off from
competition and just work on finding a job. That risk paid off. He got
a job. Now the 30-year-old is set to compete in his fifth event with
the Screamin' Eagle team. The Pro Stock Motorcycle class will next
rejoin the series at Route 66 Raceway for the Torco Racing Fuels NHRA
Nationals, June 7-10. In this Q&A session Krawiec talks about what
it's like to be the 30-year-old new guy, why he can respect a
well-thrown newspaper and why he gave up a career wearing zebra stripes
with cool shoes.


“Over the years WyoTech has attracted and aligned itself with the
automotive industry’s top companies with the ultimate goal of benefiting our
students,” said Lane Hart, WyoTech’s VP of Development. “We believe that this
alliance with Mickey Thompson Performance Tires and Wheels further strengthens
what we call the ‘WyoTech Edge.’”

Here is the schedule of the services for Dave Danish

Please join the Danish family for a Celebration of Dave's Life to be
held at California Speedway in the Apex Restaurant area immediately
following the services.