The International Drag Racing Hall of Fame will induct 11 new members. The
induction ceremony, hosted by the Don Garlits Museum of Drag Racing and
sponsored by Mopar® Performance Parts, will be held on March 15 at the Paramount
Plaza Resort in Gainesville, Fla. This is the 16th year that Mopar has sponsored
the ceremony.

ESPN2’s qualifying
coverage of the ACDelco NHRA Gatornationals has been moved up a half-hour, and
the two hour show will now begin at 1 a.m. (ET) on Sunday, March
18.

With only one week before the season-opening Amalie Oil Texas
Nationals, IHRA Pro Stock Standout Jeff Dobbins received the
unfortunate news that the team owners were unable to acquire financial
backing for the 2007 season.

After a five-year hiatus, the famous Racer Appreciation
Series returns to Huntsville Dragway and Montgomery Motorsports Park in
Alabama. Officially called TCI/Comp Cams presents the original Racer
Appreciation Series, the series, along with another series for heads-up racers,
promises low entries fees and high payouts, and will be played out at both
tracks throughout the 2007 racing season.

Famed racing promoter George Howard, of Birmingham, will
present bracket and heads-up action at both tracks through the year. “After
personal struggles in my life with losing my wife, I have decided to go back to
work,” he says. “The original Racer Appreciation Series put me on the map as a
drag racing promoter, and it was built as a way to support the ‘little guy’
racer. I want to see this (2007) series grow.” Howard started the original
series in 1994, at Rockingham Dragway.

J.W. Performance Transmissions, R & D specialists Ken Frederick will be
available on Friday, March 16, 2007 along with Tracy Winters, VP of
Sales/Marketing to meet with racers and J.W. Performance warehouse distributors
at the NHRA AC Delco Gatornationals held in Gainesville, Florida.

John Coughlin claimed his first victory of the young 2007 season when
he drove his brand new JEGS.com entry to the Top Dragster title at the
Southeast Division Lucas Oil Drag Racing Series event at Orlando Speed
World Dragway this weekend. Coughlin, who made just a handful of test
passes in the new racer before the start of the event, turned in a
nearly flawless performance in the final round against former IHRA
champion and Million Dollar Race winner Troy Williams Jr. Coughlin
began the run with a nearly perfect reaction time and finished with a
7.287 elapsed time on his dial in of 7.28-seconds.

“We’re very appreciative of Valvoline stepping up to the
plate to remain as Rod Fuller’s primary sponsor at the Gainesville race,” team
owner Powers said. “This helps as we continue to hunt for a primary backer.
Valvoline and Rod Fuller are synonymous, and Valvoline will continue to play a
vital role in the success of our team this season.”

DUNN AND BARTONE RUNNING FOR CHAMPIONSHIP 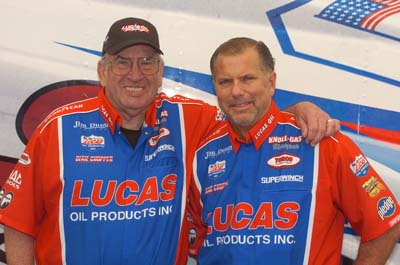 The beginning of the 2007 NHRA POWERade Drag Racing season has been a
frustrating one for legendary Lucas Oil Funny Car crew chief and car owner 'Big'
Jim Dunn and his championship caliber driver, Tony Bartone.

The pair just missed qualifying for the quickest Funny Car field in
history at the season opener in
Pomona when their 4.816 elapsed time
fell just short of the outrageous 4.79 bump spot. At the next race in
Phoenix, Bartone ran 323-mph but
missed the show by one spot when he qualified 17th. But despite their
early set backs, the Lucas Oil team is primed and ready to rebound at the
Gatornationals, the first race of the season on the East coast.