THRILL SEEKING? FLY IN AND OUT OF GAINESVILLE

Joining the “mile high
club” may be a flying club some seek to join, but two clubs were created this
weekend for members of the drag racing community headed to the NHRA
Gatornationals didn’t particularly care to join. The common denominator was
flying in and out of Gainesville Regional airport with Delta Airlines.

Thursday marked the inauguration
of the “Delta Hot Lap” club while Monday morning marked the first flight of the
“Delta One-Prop” clan.

Six new automotive and
motorcycle-themed programs will premiere on ESPN2 the weekend of March 31-April
1.

All part of the ESPN2
Garage block of programming, The Bidding Wars, Funkmaster Flex’s
Car Wars, Hot Rod Television, Metric Revolution, P.I.P.E.S and
Stacey David’s GearZ will debut on Saturday, March 31, and Sunday,
April 1, with replays to air later in the week.

Designed to complement ESPN’s extensive coverage of
NASCAR, IndyCar, Champ Car and NHRA racing in 2007, ESPN2 Garage
is dedicated to the automotive, motorcycle and motorsports
world. ESPN2 will air more than
1,100 hours of motorsports programming in 2007.

The devil is in the details.

Many NHRA POWERade teams decided to stick around at
Gainesville Raceway following the 38th annual ACDelco
Gatornationals, to get some testing under their belts without having to pack up
the trailers and head to other circuits.

After all, the Gatornationals had yielded some
record-breaking speeds and times over the past weekend.  At the same time, there had been some fairly
violent wall smacks, particularly in eliminations, that affected the outcome of
races on Sunday.

SO EASY A CAVEWOMAN COULD DO IT

Gatornationals Pro Stock Motorcycle champion Karen Stoffer achieved one
of the hardest feats in drag racing by winning the race from the No. 16
qualifying position. What made the victory even more impressive are her three
holeshot victories, which included beating the No. 1 qualifier and new national
record holder Angelle Sampey in round one. She also strapped a holeshot on
runner-up Matt Smith, who was racing a woman for the fourth time in six career
final round appearances. Stoffer admitted that qualifying didn't go well. 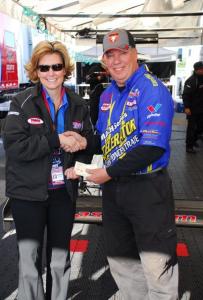 Tim Lewis knew from the moment Evan Knoll announced his Melanie Troxel-driven,
Vietnam Veterans/POW-MIA Tribute dragster that he wanted to be involved. The
62-year old partner in the Foley & Lewis Top Fueler driven by Doug Foley was
a Vietnam-era veteran and knew first-hand the plight the brave servicemen and
women encountered upon returning to country after their tour of
duty.
Today, Lewis gave back in memory of his friends who served our
country during the tumultuous years of 1965 – 1975. His donation will make
possible a special gift to each Vietnam Veteran and POW-MIA Family member who
attends each NHRA POWERade event as a guest of the Troxel team.
The National Hot Rod Association has likewise donated eight
tickets for each event to support the cause. This program began in Pomona during
the NHRA CARQUEST Winternationals.

Angelle Sampey has been racing for 11 years, has three Pro Stock
Motorcycle championships in her trophy case but still confesses “I haven’t had a
perfect run yet.”

That would include Saturday’s national record caliber
6.911.

Hillary Will has been on television many times driving her Ken Black Top Fuel
dragster, but soon she will be a contestant on a game show.  The producers of
the NBC game show Identity heard
about Will and her profession when she gave a speech at the North American
International Auto Show earlier this year.  The premise of Identity is that a contestant tries to
guess a certain trait of twelve strangers.  Will went to Hollywood to be one of
those strangers along with magician Lance Burton, a world-record holder for
sword swallowing, and Chewbacca of Star
Wars.

Former Top Alcohol Dragster driver Michael Gunderson looked impressive during
qualifying at his home track. The Florida resident recorded an impressive
career-best 4.635 at 326.16 mph on Friday to make the quick half of the field in
the No. 6 spot.

Former Top Fuel driver and crew chief John 'Bodie' Smith is
providing the tune up for five-time NHRA Division 2 Top Alcohol dragster
champion in Gainesville and he was pleased with the team's qualifying
results.

IS THERE A BODY MECHANIC IN THE HOUSE?

Bob
Gilbertson encountered big time problems during his third qualifying attempt
Saturday in Gainesville. Gilbertson was on a strong pass when the motor exploded just past half
track, causing a considerable amount of damage to the Autolite XP Spark Plugs
flopper.

Greg Anderson may have wanted to be the first to run 210, but
technically he was the third. Let the record reflect that Mike Edwards
was the history maker.