Torco’s CompetitionPlus.com
has learned the NHRA is aggressively taking a stance against team orders and
diving with the Countdown entering its second phase this weekend.

Reportedly, a letter was
issued from Graham Light to the professional teams pointing out this practice
will not be tolerated.

Torco’s
CompetitionPlus.com contacted a member of the NHRA’s management team to confirm
the authenticity of the letter but the official couldn’t immediately verify or dispel
the letter’s contents.

Torco’s
CompetitionPlus.com obtained a copy of the letter issued and it leaves no room
for interpretation.

Leading up to Charles Carpenter’s trip to Summit Racing Equipment Motorsports
Park in Norwalk, OH, all talk in the shop revolved around one thing: going
rounds. Carpenter did more than just go rounds Saturday night, as he captured
the Pro Nitrous crown at the inaugural Flowmaster ADRL Chevy Drags with a final
round win over fellow North Carolinian Rod Houck. The win was Carpenter’s second
ADRL national event victory of 2007 and fourth major win overall.

“This is awesome. I can’t say enough about my crew and
everyone that makes this happen,” Carpenter said. “To win one of these Iron
Eagles is a feat in itself, but to win two in one season is incredible. We came
in here on a mission to just get past the first round, which is something we
hadn’t done since our win in Houston. I guess we just can’t stop once we get
going!”
Carpenter’s tire-shaking qualifying effort Friday night
left all the pressure on Saturday’s performance. Three separate thunderstorms on
Saturday added to that pressure, and the tension mounted in the pits as track
drying efforts left time for only one qualifying session instead of the usual
two.

A policy and its
enforcement threatens to push one of drag racing’s and the NHRA’s longstanding
icons from the show.

Ollie Volpe says his team
has had enough and the U.S. Nationals at Indianapolis will be the last time
you’ll see the Mr. Gasket trailer on the Manufacturer’s Midway at NHRA events.

“We’ve been doing this for
20 years, but after Indy we won’t have our big rig at any of the events,” said
Volpe, Racing Services Manager for Mr. Gasket. “The people who will really
suffer from this will be the racers, and I feel really bad about that.”

Volpe said the issue isn’t
that NHRA has rules, but rather the selective way they enforce them.

“They have their rules and
they are going to stick by them,” Volpe said. “We own a company and we can’t
push out a gondola to display our products. If I can’t do that, I’m not
bringing in an 80-foot rig just to display four products.”

Although three-time NHRA POWERade Pro Stock Champion Greg Anderson will try to
approach it as just any other race, the 53rd annual NHRA Mac Tools U.S.
Nationals may be the biggest race of his career.

First and foremost,
Anderson, driver of the KB Racing LLC-owned, Summit Racing Equipment Pontiac
GTO, along with every driver on the O’Reilly Raceway Park at Indianapolis
facility, wants to win what is considered by most as the largest and most
prestigious event on the NHRA circuit.

Secondly, and maybe more important
from a historic point of view, Anderson, who has won five times in six final
rounds at Indy, including four-in-a-row, is trying to become the only
professional driver to win the Mac Tools U.S. Nationals five consecutive times.
He won here in 2001 and 2003-2006 and was runner-up in 1999.  He also earned the
No. 1 qualifying position three times (2004-2006).

"Obviously, winning
four-in-a-row at Indy has been pretty cool for me," said Anderson.  "I think
there is only two other Pro Stock guys that have done that -- Bob Glidden and WJ
(Warren Johnson). I don't believe that anyone in any professional class has ever
won five straight, so if I could do it that would put me alone in the record
book.  That would be a heck of a feather in our cap, winning
five-in-a-row.” 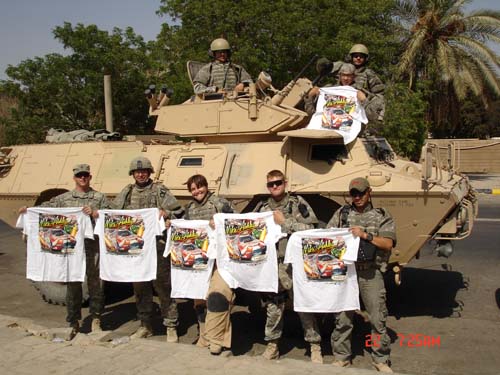 Torco's
CompetitionPlus.com always feels a sense of pride when we see our brave
troops overseas. Thanks to our good friend Lee McKinney we have this
picture of the brave soldiers  from the 240th MP battalian working in
SADR City and Northern Baghdad. That's the worst part in baghdad.

Here are a few diehard Mike Ashley fans and and a few drag
racing fans doing the deed. Thanks to Gotham City Racing as well as all the teams for their support on
the project.

Current NHRA Top Fuel points leader Rod Fuller
will pilot the yellow-and-black MacAllister CAT dragster during the 53rd running
of the prestigious U.S. Nationals. David Powers Motorsports and
Indianapolis-based MacAllister Machinery have partnered for the Indianapolis event, Aug. 29-Sept. 3, at O’Reilly Raceway
Park at Indianapolis, it was announced today. This is
the seventh time that David Powers Motorsports and a Caterpillar dealer group
have joined to back Fuller’s car this season.

The
relationship between David Powers Motorsports and the CAT dealer groups is
designed as a pilot program to increase technician recruiting. Caterpillar
dealers are experiencing a shortage of technicians and NHRA drag racing offers a
technician-rich recruiting environment to find qualified candidates with
experienced mechanical backgrounds. MacAllister Machinery is Indiana’s leading heavy equipment supplier and operates 14
locations throughout Indiana.

“This is the seventh time we’re running the CAT colors,”
Fuller said. “I hope this is lucky number seven and we can put this MacAllister
CAT dragster in the winner’s circle. To do that at the U.S. Nationals, our
biggest race of the year, would be an awesome way to showcase our talent and to
get the word out about the need to hire technicians for the Caterpillar dealers.
We want to have another strong showing in the CAT car as we begin the
Countdown.”

Australia’s
most successful drag racing organization, Team Bray, has signed a new naming
rights sponsorship deal with ARMOR ALL, the country’s most popular automotive
detailing products company, for the 2007/2008 season.

Ben
Bray’s 2005/2006 championship-winning Top Alcohol Funny Car will change from
its silver ‘shark’ livery and debut in the trademark ARMOR ALL black, orange
and yellow colors at the opening round of the new season, the East Coast
Nationals, at Sydney’s
Western Sydney International Dragway on August 31-September 1. 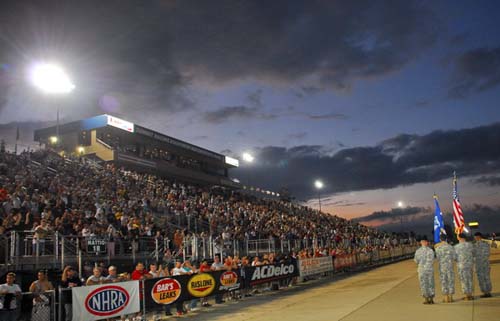 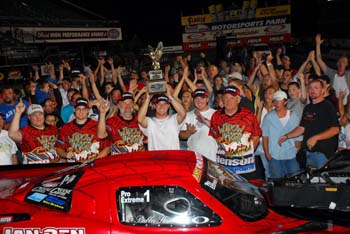 
The ADRL's first trip to
- and first trip into the northern part of the country - ended early Sunday
morning with Bubba Stanton (Pro Extreme), Charles Carpenter (Pro Nitrous),
David Janes (Extreme 10.5), and Eddie Gonder Jr. (Pro Extreme Motorcycle)
claiming event titles in their respective classes. The event was plagued by
three rain delays Saturday, beginning just before the scheduled start of
eliminations, but the track was dried and prepped in good order each time.

The Suzuki Motor City Nationals presented by GM Performance Division and
Heritage Newspapers at Milan Dragway has tentatively been moved to Sept. 21-23
due to weather concerns.

Heavy rain in Southeast Michigan Friday night dropped over an inch of rain on the
Milan area. In addition, the region has experienced nearly 12
inches of rain in the past six days. IHRA was able to get the track dried
Saturday morning and racing began at 9:30 a.m., but
the rains came again at noon and
continued until 3:00 p.m. when
IHRA officials finally decided to pull the plug on the
event.

The steady rain completely saturated the track surface, leading to
the determination by IHRA track guru Jim Weinert that it would not be possible
to offer a safe race track to the racers until late Sunday or early Monday at
the earliest.

Jim Halsey, usually a staple on the IHRA Pro Modified tour,
skipped the event in Milan, Michigan to come to Norwalk. He wasn't the
only one. Tour regular Burton Auxier was also there amongst a score of
other former IHRA Pro Modified racers. In fact, there were only two
nitrous racers in Milan.