Honorees were announced today for
the fifth annual National Hot Rod Reunion, Jun. 15-17, 2007 at National Trail
Raceway near Columbus, Ohio. The honorees are John Abbott, Don Cain,
Ted Harbit, Fred Hurst, and the team of Gary Rupp and Pat Dakin. Jeg
Coughlin will be the Grand Marshal, while the Justice Bros. Reunion Spotlight
will fall on Frank Hawley.

John Abbott began his long drag racing career near his Denver home in
1954. His accomplishments at the wheel of fuel dragsters include the 1977
Top Fuel title at the Popular Hot Rodding Magazine Championships, the IHRA
Spring Nationals in 1978 and the AHRA Winter Nationals in '79. He capped
his career with a victory in the NHRA U.S. Nationals, taking the Top Fuel title
in 1981 following a runner-up finish in 1980.

Don Cain's biggest win came with his Top Gas victory at the 1967 U.S.
Nationals. He won six NHRA Division 5 Championships in Top Gas Dragster.
Cain then drove a Plymouth Satellite Funny Car for the team of Pusch and
Cain match racing throughout the Midwest. He retired from drag racing in
1974 and focused his attention on street rods. After his retirement from
General Motors in 1988, he and his wife Nan opened K.C. Street Rod Parts in
Kansas City, Mo. 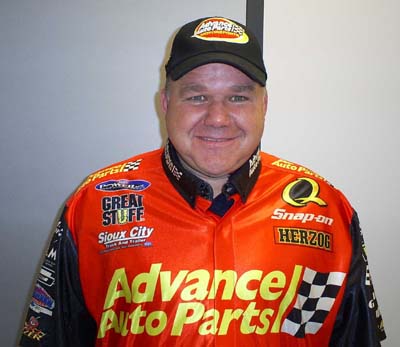 "Everyone
at Cruz Pedregon Racing is really excited to have such an experienced crew chief
like Wayne Dupuy on our side heading into the 2007 season," Cruz Pedregon,
owner/driver for the team, said.  "His
reputation on the NHRA circuit is unmatched, and he is highly regarded by
everyone that knows him.  His ability to
tune both Funny Car and Top Fuel machines is what impressed me.   We had a successful year in 2006, but always
try to assess how we can be more competitive and consistent for the next event
or season.  As part of that process, we
have to evaluate each person involved with our team to determine if changes need
to be made, and we were so fortunate that Wayne was available to join our
operation for next year, as we're definitely aiming for the championship.  We've also added an assistant crew chief,
Kevin Butterfield, which should strengthen our whole team.  Our entire Advance Auto Parts race team
welcome Wayne and Kevin to our racing family, and we look forward to working
with both of them to create winning race cars in the coming season."

CONGRATULATIONS TO THE RITENHOUSE FAMILY

ADRL Publicist Duke Ritenhouse and wife Kristen have a new member in the
family. Matthew  Craig Ritenhouse, who was born Nov. 22, 2006, at Washoe Medical
Center in Reno, Nevada.

GILBY AND STOCKS FOR TOTS

STEVENS EARNS 2006 ‘WHO GOT THE LIGHT’ AWARD

Richie Stevens Jr. earned $25,000 for winning a round of eliminations by the
narrowest margin of victory in 2006.

Stevens defeated Jim Yates by a .0003-second
margin in the first round of Pro Stock eliminations at the O’Reilly NHRA Midwest
Nationals in Madison, Ill. in June to become the Motel 6 “Who Got the Light?”
season award winner. It was the closest POWERade Series margin of victory
recorded since 2003.

Chassis builder/IHRA Pro
Stock driver Rick Jones plans on having a two-car team in 2007, neither of
which he will drive. Jones will use the competition

“I’m not giving up driving permanently. I just want to
do a good job of taking care of my customers,” Jones said. “I feel that we
build the best race car, and we have the best customers. I want to make sure that
it stays that way. I am very excited about next year to say the least. Bonnie, Rickie and I have always wanted to
run two cars. We are putting sponsorship in place for the second car, and that
sponsor will be announced in the near future.”

NHRA drag-racing star Ron Capps, famous for
his willingness and desire to
drive just about anything on wheels if given
the chance, will compete in the
invitational Stars of Karting presented by
the IRL All-Star Kart Race in
Orlando, Fla., Dec. 14 against a star-studded
list of professional kart
racers and other celebrity racing pros.

SPOKANE TO RUN AS SCHEDULED

In wake of legal battles and the impending sale of Spokane Raceway
Park, auto racing will continue next spring at the embattled
motorsports complex.

So believes Troy Moe, who heads one of the local group of investors interested in buying the facility.

The park remained open this past season under interim general manager
Jim Tice. The 600-acre facility, which is in need of remodeling,
supports a quarter-mile drag strip, 2.5-mile road course and half-mile
asphalt oval.

SRP is prepared to reopen in April. Tentative race dates are being taken for the 2007 schedule.

Rice assumed GM duties after Orville Moe, the legendary force behind
SRP for three decades, was fired June 1 by a judge who concluded the
69-year-old millionaire had disobeyed a court-appointed receiver
overseeing financial operations.

Three-time POWERade Pro Stock champion Greg Anderson and newly crowned 2006
POWERade Pro Stock champion Jason Line will take time off from preparing for the
2007 season-opening NHRA Winternationals for a good cause – the 2006 “Stocks for
Tots,” being held Tuesday, December 12, at the Charles Mack Citizens Center in
downtown Mooresville, N.C.  The annual holiday fundraiser begins at 6 p.m. and
closes at 10 p.m.

“There is a large group of racing teams housed in the
Mooresville area and KB Racing is proud to be part of that group.  Stocks for
Tots allows us to forget about our work and come together, for one night, to
benefit the community.  It’s a great time of year and we’re glad that we can be
a part of this year’s fundraising,” said Anderson.

A group of goodwill ambassadors from the NHRA is back in the United States
after a three-day USO-sponsored tour of U.S. Military installations, including
the Kaiserslautern Military Community and Spangdahlem Air Base. It was the
second consecutive post-season visit for the drivers, and as in 2005, the time
spent with the American troops and their families stationed in Germany was a
brief but memorable chapter in their careers they'll be talking about for a long
time.

Six-time NHRA Pro Stock champion Warren Johnson, two-time NHRA Pro
Stock champion Jim Yates, Funny Car driver Tommy Johnson Jr., and Top Fuel
drivers Cory McClenathan and Melanie Troxel (who joined the group for the first
time this year) represented the sport of drag racing during the 72-hour
troop-morale mission to Germany. The Army Special Forces Association, Randall
Shughart Chapter 64, based in Carlisle, Pa. once again served as the vanguard
for this year's visit and the 435th Services Squadron at Ramstein AB hosted the
group during its stay in Germany. The drivers distributed over 1,500 goody bags
that included racing caps, tee-shirts, racing decals and other items, signed an
even greater number of autographs and brought good cheer to everyone they
met.