Sherrill K Dimit, of the PTS Safety Crew that formerly serviced IHRA
events, passed away suddenly at home on Friday, October 27, 2006. She
had suffered a fall nine days ago and suffered a fractured arm and as
well as a mild concussion. She was recuperating at home when she
suddenly felt ill and passed away. Although no longer a part of the
IHRA family she still was attached to the great memories of the
32-years that she took care of the drivers on the track and especially
at top end. 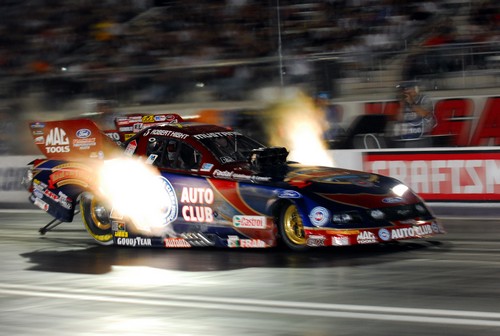 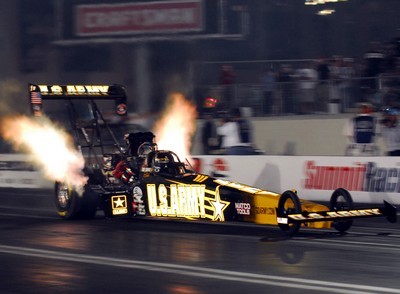 Three-time
Top Fuel champion Tony Schumacher raced to a track record time of 4.445
seconds at 333.08 mph in his U.S. Army dragster Friday to highlight the
opening day of qualifying at the ACDelco Las Vegas NHRA Nationals.

Robert Hight, Jason Line and Andrew Hines also were qualifying leaders
in their respective categories at The Strip at Las Vegas Motor
Speedway. The $1.8 million race is the 22nd of 23 events in the $50
million NHRAPOWERade Drag Racing Series.

Although he's 89 points out of the Top Fuel lead with just two races
remaining, Schumacher's track-record run proved he won't go down
without a fight. The pass was the seventh quickest ever and put him a
full eight-tenths of a second ahead of the field, a titanic gap in
professional drag racing.

"That run was perfect," Schumacher said. "Hey, we need these points. We
need a world record. That was nine-thousandths short of one right there
but Alan said that was all there was to get. We'll definitely go for
itin Pomona but first things first; we need to win this race. We have
no room for error."Doug Kalitta and Brandon Bernstein, first and second
in the Top Fuelpoints order, qualified third and fourth. Kalitta posted
a 4.530 at 327.74 mph in his Mac Tools/Von Dutch dragster, while
Bernstein ran a 4.544 at 331.61 mph in the Budweiser/Lucas Oil dragster.

AND HE WALKED AWAY... 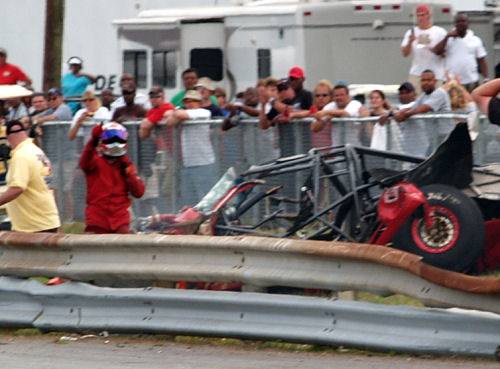 Eddie Timal had a bad day during the Friday's qualifying for the
Orlando World Street Nationals. Torco's CompetitionPlus.com
photographer Kelly Pelrine captured the Toronto-based 10.5 Tire driver
and his mishap. He was uninjured. 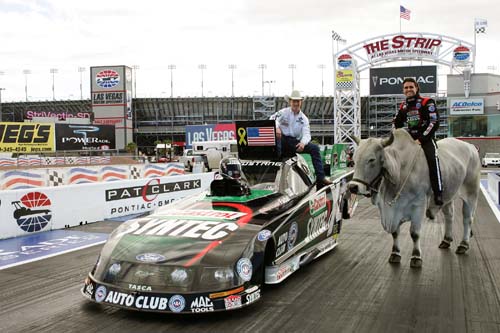 What do a Funny Car driver and a PBR rider have in common? More than you might think. This week the NHRA POWERade Series and the PBR's Built Ford Tough World Finals are taking over Las Vegas, giving sports fans all they would need in the way of power and performance.

Eric Medlen, driver of the John Force-owned Castrol SYNTEC Ford Mustang
and PBR Finalist Cord McCoy got together Wednesday at The Strip at Las Vegas
Motor Speedway, each bringing their own talent to the track.
"Las Vegas has always been one of the most exciting cities because you can
go to a drag race, a concert and watch the best bull riding around, all in one
city," Medlen said. "There are so many things that bull riding and drag racing
have in common. We have to build our beast out of steel and put it all together
and then learn how to tame it long enough to make it go down the quarter-mile
track at blazing speeds.

The eight-car field for the lucrative Budweiser Shootout was set on
Thursday evening during a draw party at The Joint in the Hard Rock
Hotel and Casino. David Baca, who drives the Mach 1 dragster, was the
lucky No. 8 wild card spot winner among the eight Top Fuel drivers
eligible for the position.

The Budweiser Shootout, a special race-within-a-race bonus event that
pays the winner $100,000 is contested annually during the ACDelco Las
Vegas NHRA Nationals at The Strip at Las Vegas Motor Speedway. The
first-round begins at 12:30 p.m. Saturday, with rounds to follow at
3:15 p.m. and 5 p.m.

CREWMEMBER FOR A DAY

NHRA POWERade Funny Car driver Mike Ashley will provide the opportunity for a
drag racing fan to be a part of the Knoll Gas – Torco Funny Car team during the
upcoming Automobile Club of Southern California NHRA Finals in Pomona, Ca,
during the weekend of November 9 – 12. One lucky winner of a special auction to
benefit Racer’s for Christ will receive a plethora of prizes that includes two
pit pass credentials for the race, lunch and dinner in the hospitality area and
photo ops with Ashley just to name a few.

The legal fight and angry words continue over the future of Spokane Raceway Park.

But the court-ordered direction of the troubled and storied motorsports
facility is clear – there will be new ownership, new management and new
plans.

The facility’s plight now is in state court hands as it goes through
the legal steps toward building financial and organizational
credibility in wake of Orville Moe’s dismissal as general manager.

Moe, the legendary force behind SRP for three decades, was fired June 1
as GM of the racing complex by a judge who concluded the 69-year-old
millionaire had disobeyed a court-appointed receiver overseeing
financial operations. 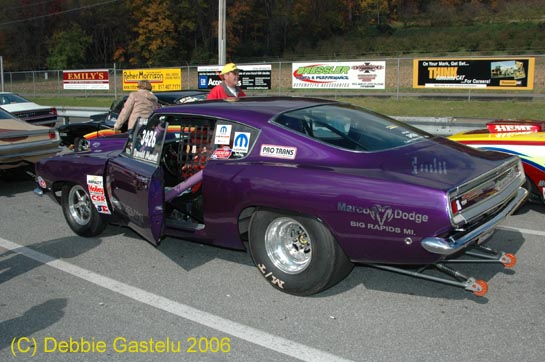 Jim Pancake qualified in the No. 3 position and then worked his way through the
24-car field for the NHRA Mopar Hemi Challenge win at Maple Grove Raceway and
the Pennsylvania Dutch Classic.


The Delaware, Ohio, racer drove his '68 Dodge Dart to a 8.609 second lap at
152.14 mph in his final round match up against Joey Wilkes of Zanesville, Ohio
who clocked in at 8.713 seconds, 151.87 mph. The win puts Pancake on top in the
point's battle for the 2007 Mopar Hemi Challenge Series with 95 points jumping
past Rick Houser who won the Pacific Sportsnationals Hemi Challenge at the end
of September at Auto Club Dragway in Fontana, Calif. The series includes events
in the second half of the 2006 season along with several events in 2007 leading
up to the final event contested at the Mac Tools US Nationals at O'Reilly
Raceway Park over Labor Day weekend.

VICTIM OR BENEFACTOR OF INVERTED FIELDS? 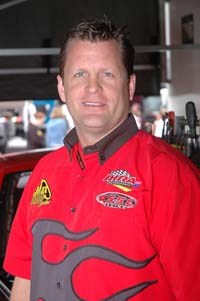 One would think Tony Gillig would be opposed to the inverted ladder after the
day he experienced in defense of his point lead. He opened the day against the
low-qualifier Robert Patrick and with a victory would have raced another
heavy-hitter in Robert Mansfield.

Patrick defeated Gillig in
the first round to put a crimp in his championship plans.

Bob
Gilbertson might not have had the baddest hot rod on the Rockingham Dragway
quarter-mile Friday night, for he is unqualified so far for the Nitro Funny Car
field. But he was riding in arguably the coolest set of wheels on the property
on the way back to his pit.

Sporting the same
blue-with-orange-flames paint scheme that earned his Jungle Jim tribute car lots
of attention in September at Indianapolis, Gilbertson's overhauled 1987 Cadillac
Brougham limousine made its grand splash at the IHRA season finale as the
Terminator Motorsports tow vehicle.