GEARING UP FOR TOP FUEL PINKS 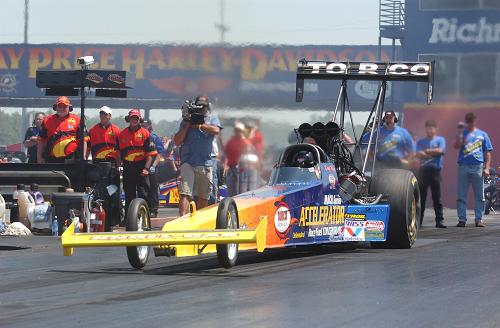 Growing
up outside of New York City, both Doug Foley and Bobby Lagana knew all
too well the concept of racing for “pink slips”. Two people race and
the loser hands over the ownership of his vehicle to the winner.

Foley, a native of Mamaroneck, NY; now living in New Jersey; and
Lagana, a resident of Scarsdale, NY, also understood that street racing
is not drag racing. The two have grown up to earn their livings as
professional drag racers on the NHRA/POWERade and IHRA/eMAX Drag Racing
tours. Success has found both, as Foley was poised to win the IHRA
Torco Pro Nitro Top Fuel Dragster championship last year after
finishing No. 2 in 2005. An unfortunate on-track accident in September
sidelined him for the final two races, but for 2007, he’s back with a
new car and a new ultimatum: Beat Bobby Lagana!

In 2007, the Garlets
Motorsports A-fuel dragster team will be teaming up with the “Official Technical
School” of the NHRA as
their major sponsor.  The team, which is
based out of Lowell, Indiana, will be traveling to over 20 races
throughout the season in an effort to bring attention to WyoTech, which
currently has over 10,000 students in 7 different locations nationwide.

Dick Garlets, owner and
driver of the new Hadman chassis dragster, couldn’t be more excited about the
opportunity.

“LiL” Nate Racing Nostalgia Nitro funny car team is pleased to announce
an associate sponsorship with Cousimano Oil Company, supplier of
lubricants to all types of motorsports.  CMW Oil Company is a sister
company to CMW Motorsports, which has been in the business of producing
pro racing engines along with product development, including oil
lubrication.  CMW Oil Company is responsible for the development of
Entech, the new generation of lubrication line – gas or diesel engine
oil additive, industrial assembly lube, industrial anti-seize, retainer
and valve spring lube, engine assembly lube and fastener assembly
lubricant.  This formula is unique and proprietary and it can only be
found in the Entech line of automotive and industrial products.  It’s
the new generation of lubrication with no contaminants.  More
information about their products can be found on their web site at
http://www.cmwoil.com.

Tim Marshall has captured some of the first cars unloading in Las Vegas.

Keep up with the weekend's news - VEGAS TEST

No purchase or credit card is required to
participate, and players may also create private leagues while still competing
for prizes.  Players can win weekly and quarterly prizes, including t-shirts,
hats, autographed drag racing memorabilia and gift cards good at all Checker,
Schuck's, Kragen and Murray’s auto parts
stores.

Clay Millican will have an opportunity to see how well he fares against NHRA Top
Fuel competition on a fulltime basis in 2007, thanks to new team owner Evan
Knoll.

Knoll recently finalized purchase of the team from Kenny
Koretsky’s KPK Motorsports and immediately gave the popular Millican the green
light to follow the 23-race NHRA POWERade Series tour. The team will fill the
open dates with IHRA events.

Robert Hight, NHRA's 2005 Rookie of the Year, will serve as Grand Marshal of
the March Meet when the event returns to Auto Club Famoso Raceway, Mar.
9-11.  Hight, who finished second in last year's Nitro Funny Car Division of
the NHRA POWERade Drag Racing Series, will reign over the jewel of nostalgia
drag racing as drivers from across the country compete in 14 classes.

His Automobile Club of Southern California and Castrol-sponsored 7,000
horsepower Ford Mustang will be on display all weekend at the extensive
Auto Club display near the pits.  Hight will be signing autographs on both
Saturday and Sunday.  When he's not signing autographs, he'll be having
fun at the family-oriented meet with his wife Adria and daughter Autumn.
Adria is also involved in motor sport.  She's not only Hight's wife, she's
John Force's eldest daughter.

They say every adventure begins with a first step. For Rodger Brogdon
the first steps in his pro stock career came this past week as the team
ventured to Houston Raceway Park for some obligatory new car check out
laps as well as the laps needed to complete the licensing runs for
Brogdon’s pro stock license.

Taking advantage of some 70 degree January weather, the team was able
to get some laps completed down the newly resurfaced track at HRP. With
the favorable weather, the track was prepped and Rodger and his new
Jerry Haas Dodge Stratus started the process of driver becoming one
with the car. Initial hits were short launches to make sure the chassis
and wheelie bar settings were on target. As the day progressed, so did
the distance down the track and by late in the day, Brogdon was ready
to see just how well the team could do in its first full lap down the
track.

Veteran Top Fuel Wrench, Dave Hergert, died
suddenly on Saturday, January 13, 2007.
He was 42 years of age.   He
succumbed to injures suffered in an auto accident three months ago.  Affectionately known as Brother Dave, by
those who knew him.  Dave spent nine
years in Top Fuel drag racing, starting out as a co- crew chief in 1997.  He gave his heart and soul to drag
racing.  He will be sorely missed.

SHIFTING TO A HIGHER GEAR

Nate Shelton, CEO of the B&M Companies, announced today
that his firm had purchased the Hurst Shifter Division of Mr. Gasket,
Incorporated.

Hurst has been a familiar name to drag racers for more
than 40 years due to not only their OEM applications, but for their
numerous products that have seen action on the quarter mile.