Sat, 2007-03-24 20:04
Funeral services for professional race car driver Eric Medlen, 33, will be held
at 10 a.m. Wednesday (March 28) at Connection Pointe Christian Church, 1800 N.
Green Street, Brownsburg.  In addition to Wednesday’s services, there will be a
viewing from 6-8 p.m. Tuesday at the same church.
Medlen succumbed to complications from a closed head injury four days
after his drag racing Funny Car crashed during routine testing at Gainesville
(Fla.) Raceway.

We found it interesting to compare Shannon Jenkins' new Pontiac GTO with NASCAR's Car of Tomorrow. We see no confusion with the Pro Stocks (which precipitated a future rule change) but we have determined that race fans might all of a sudden think the IHRA is running NASCAR vehicles.

Sat, 2007-03-24 12:19
For the first time since 1974, the IHRA will stage a full-fledged national
event on an eighth-mile racing surface. The decision was made on safety.
Following an oildown during Friday evening qualifying, IHRA officials noticed
the racing surface was compromised and required repaving to rectify the
situation.
Friday's qualifying has been recalculated on eighth-mile elapsed
times. Most of the top qualifiers remained atop their respective fields
except for two classes - Top Fuel and Alcohol Funny Car. The new low
qualifiers are now Bruce Litton and Terry Munroe respectively.
An official statement for the IHRA is forthcoming. 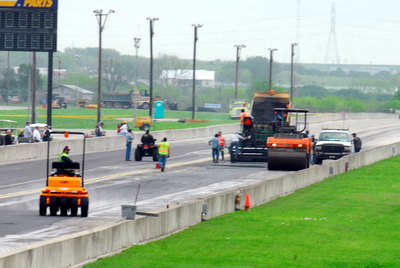 Friday night's Funny Car qualifying was reduced to one lane and with good reason.

Apparently, the right
lane is being repaved. A asphalt company was called in last night and
crews worked through the night to repair damage. If all works as
planned sportsman racing
will begin at 11 a.m. with time-trials
for all classes. At 1 p.m., the
professional categories will begin the day’s first round of qualifying. The
HOLT CAT
“Night of Fire” and the final professional qualifying session will begin as
scheduled at 6:30 p.m. 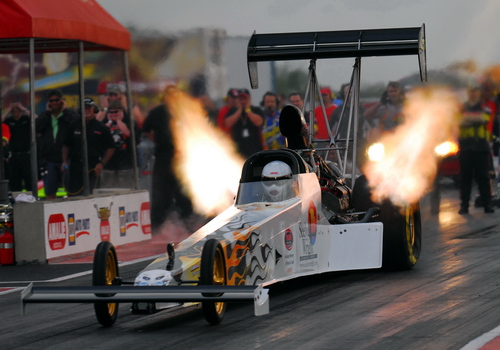 Robert E. Petersen, an entrepreneur who single-handedly created the largest
special-interest publishing company in America, was instrumental in the
evolution of the hot-rodding culture, and who, with his wife Margie, realized
his dream of establishing an educational museum to pay tribute to the
automobile, died on Friday, March 23, at St. John’s Hospital in Santa Monica,
Calif. after a short but valiant battle with neuroendocrine cancer. He was
80.

“Mr. Petersen helped create and feed the American obsession with the
automobile, delivering gasoline-powered dreams to the mailboxes of millions,”
said Dick Messer, Director of the Petersen Automotive Museum in Los Angeles. “He
understood the thrill that an average person could get from seeing and reading
about horsepower as an art form.”

A native of Southern California, Mr. Petersen’s mother passed away when he
was 10, leaving him with his Danish-immigrant father, who worked as a truck and
equipment mechanic. As a young man he picked up his father’s skills, learning to
weld, de-coke engines, and hone his fascination with cars.

Father and son automotive design legends Sam and Chip Foose will be honored as
“Hot Rod Heroes” this summer in Columbus,
Ohio at the Goodguys 10th PPG
Nationals held July 13, 14 & 15 at the Ohio Expo
Center. The father & son hot rod dream team
will be on hand at the Goodguys Nationals both Friday and Saturday July
13th & 14th and will participate in a special “Meet
& Greet” Saturday morning, July 14th at 10am inside the Expo Center’s
Celeste Center indoor stadium. Fans will get a rare chance to hear the Foose
family story as well as ask them questions. Autograph signing sessions are
scheduled as well.

“It
should be a really great weekend in Columbus,” Chip said. “Dad and I don’t get a
lot of opportunities to do events together so this will be
special.”

Eric Medlen, 33, who had emerged as one of the most popular young drivers in the
NHRA POWERade Drag Racing Series, succumbed Friday afternoon to injuries
suffered when his race car crashed into a guardwall during a Monday test session
at Gainesville Raceway.
The talented Funny Car driver never regained consciousness.  After being
treated at the track, he was transported by ShandsCair helicopter to Shands at
the University of Florida medical center where medical staff treated him for
four days for a severe closed head injury.
“Eric suffered from severe traumatic brain injury with diffuse axonal
injury, or DAI,” said Dr. Joseph Layon, Professor of Anesthesiology, Surgery and
Medicine and the Chief of Critical Care Medicine at UF.  “Survival rates
associated with DAI are low.

“This is a tremendous opportunity to
work with a sponsor who is passionate about what we do,” IHRA president Aaron
Polburn said. “Evan Knoll has done more for drag racing in the last two years
than most people do in a lifetime, and it thrills me to have him become an even
more integral part of our racing series.”

A former Funny Car driver
who starred on the match-race and national-event circuits in the 1960s and
1970s, Schumacher returned to NHRA professional competition as a team owner in
1998. In his first full season as an owner, Schumacher and his son, driver Tony
Schumacher, captured the 1999 NHRA Top Fuel championship.

In 2001, Schumacher added
his first Funny Car team - Whit Bazemore in the Matco Tools Funny Car - and, in
2002, Scotty Cannon in the Oakley Funny Car. In 2003 four-time Top Fuel
champion Gary Scelzi came on board to drive the Mopar/Oakley Dodge Funny Car
and earned his and DSR's first Funny Car crown in 2005. DSR also campaigned a
second Top Fuel car driven by Melanie Troxel and sponsored by Torco Race Fuels
from the last half of 2005 through 2006.