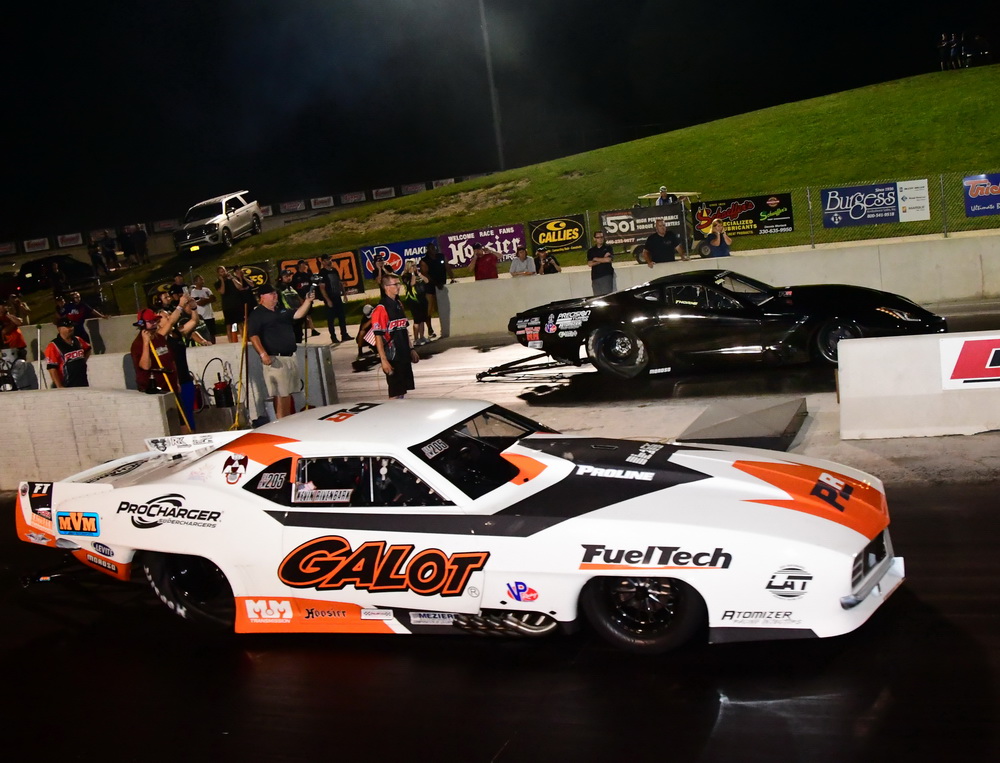 THORNE WINS BIG - Pro Boost rookie Kris Thorne survived a bizarre first round and outlasted the largest Pro Boost field of the season to earn his second career victory in his Mikey Rees-tuned ’16 Corvette. It was an all-Pro Line Racing final round, as Thorne wheeled his twin-turbocharged ‘Vette to a 3.716 at 212.36 to take out Kevin Rivenbark and his 3.718 at 199.73 in the ProCharger-boosted GALOT Motorsports ’69 Camaro. The margin of victory was nine thousandths of a second.

“I knew it was going to be close with Steve (Petty) on the keyboard over there,” Thorne said. “It was tight down there. It was definitely a good race. I'm happy those folks put up the fight they did. I'm super-blessed to be out here and have a hot rod that can take out folks like that. This Jerry Bickel race car and Pro Line power, it's a win-win combination.” 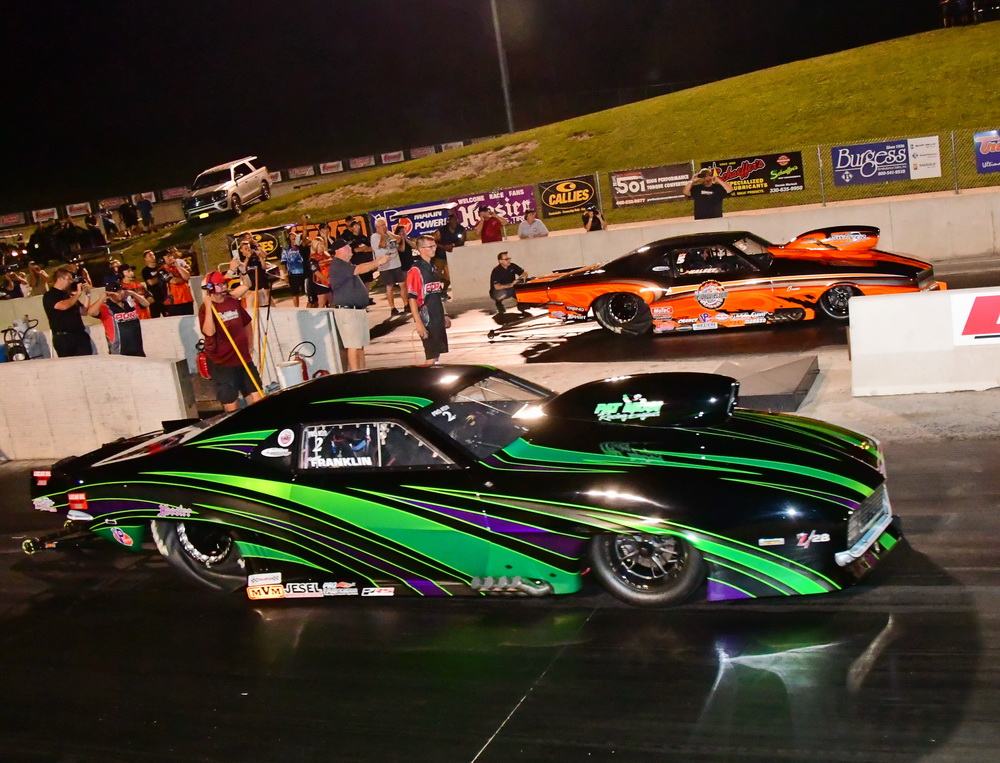 FRANKLIN OWNS THE FIELD - The two most evenly paired Pro Nitrous competitors in qualifying met in the final round, as two-time world champion and No. 1 qualifier Tommy Franklin squared off against points leader Jim Halsey. The two drivers were separated by just two ten-thousandths of a second in qualifying, but it was Franklin all the way in the final round. He grabbed a .007 starting-line advantage in the Musi-powered “Jungle Rat” ’69 Camaro and pulled away with a 3.69 at 204.36 to Halsey’s 3.739 at 194.22 in his Fulton-powered ’68 Camaro.

“Halsey's had my number for a while now,” Franklin said. “I was able to get him second round at Valdosta then get him here in the final round. When you get somebody that's got your number all the time, it feels good to start getting back after it. But they're great racers and a great team over there. We were both even on the tree. It was just a heck of a race. You can't leave anything on the table with them, that's for sure. I just thank the Lord for the opportunity to get the win.”

Halsey in his Brandon Switzer-tuned Camaro used a pair of 3.77s to first defeat John Vergotz and Ron Muenks. The nitrous Pro Modified veteran moved on to the final round with an unopposed 3.713 at 203.34 after defending world champion Jason Harris broke on the starting line. 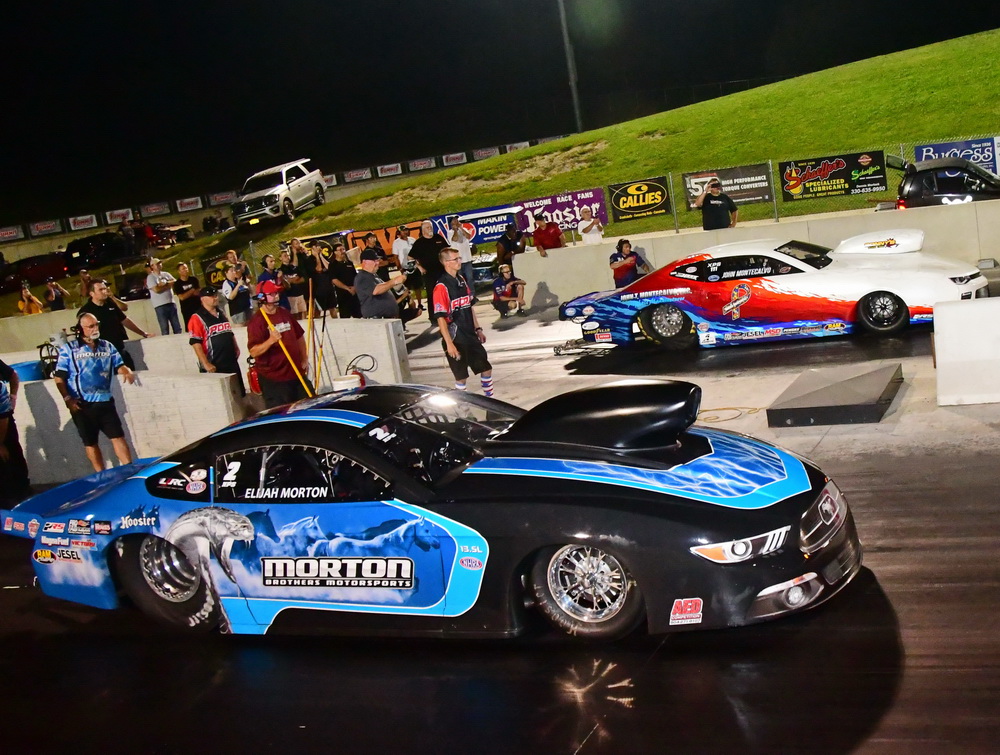 MOUNTAIN CLIMBING WITH MONTE - Mountain Motor Pro Stock veteran John Montecalvo entered the Northern Nationals with an intense focus on gaining ground on the leading Extreme Pro Stock competitors in the championship points standings. He jumped right to the top after qualifying No. 1 and securing his first win of the season in his third consecutive final round. Montecalvo used a holeshot and 4.151 at 172.81 in his Sonny’s-powered ’18 Camaro to defeat Elijah Morton and his 4.135 at 174.28 in the final round.

“I knew Elijah was gonna go fast,” Montecalvo said. “He's had a good car all weekend. Elijah can definitely drive that thing. I figured he was going to play a little bit of a game up there (on the starting line) because he likes to do that, especially against me. We're good buddies. I expected something, but you never know what's going to happen. I was happy to get the holeshot on him because he's really good on the tree and he has a fast car. The problem is once I was out I got over towards the wall. I hit second gear, the car spun the tire, shoved me over against the wall. I really probably should've let off, but it's very hard to let off when you're ahead. I didn't see Elijah anywhere, so I pedaled it a bit, got back in it and got to the stripe first.” 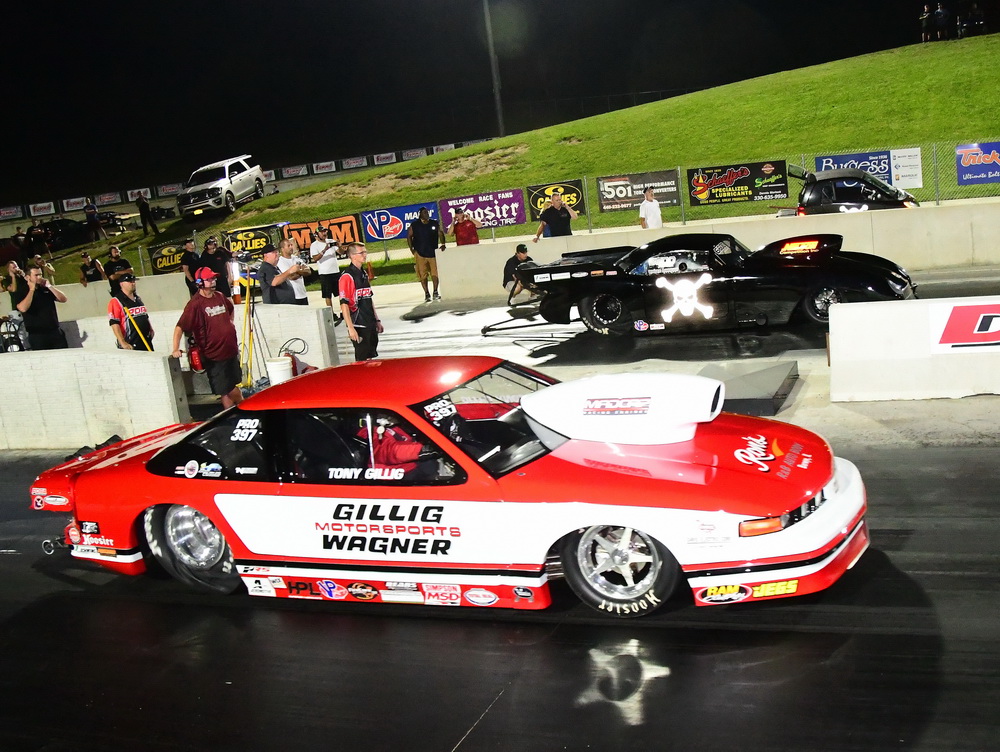 GILLIG IS THE ONE TO BEAT - The Summer Nationals was a planned weekend off for the Pro Outlaw 632 teams, but championship contender Wes Distefano and his Michigan-based $hameless Racing team put up money for a Pro Outlaw 632 Shootout worth $7,500 and bragging rights. Walter Lannigan Jr. picked up the win in a double-red-light final round, with his C&C Pumping ’53 Corvette leaving .007 too soon, but .002 after opponent Tony Gillig left the starting line early. Lannigan ran a 4.294 at 166.48, while Gillig posted a 4.359 at 161.06.

“I feel great,” Lannigan said. “I want to thank Chris Holdorf and Ms. Leslie Holdorf from C&C Pumping for giving me the chance to do this and giving us the equipment to do it. I'd like to thank $hameless Racing for hosting it and giving us a place to race today with PDRA. I want to thank my guys. I didn't think we would be here today. All the 632 guys came around and helped us when we had a situation to get the car going.”

Gillig’s naturally aspirated Gillig-Wagner Motorsports ’96 Olds Cutlass was fighting adverse air conditions, but he steadily improved as the day went on. He started with a 4.414 at 159.46 over Sylvester Barnes before stepping up with a holeshot win in the semifinals, leaving on Distefano and his 4.373 at 167.10 with a 4.386 at 160.37 in his Madcap-powered entry. 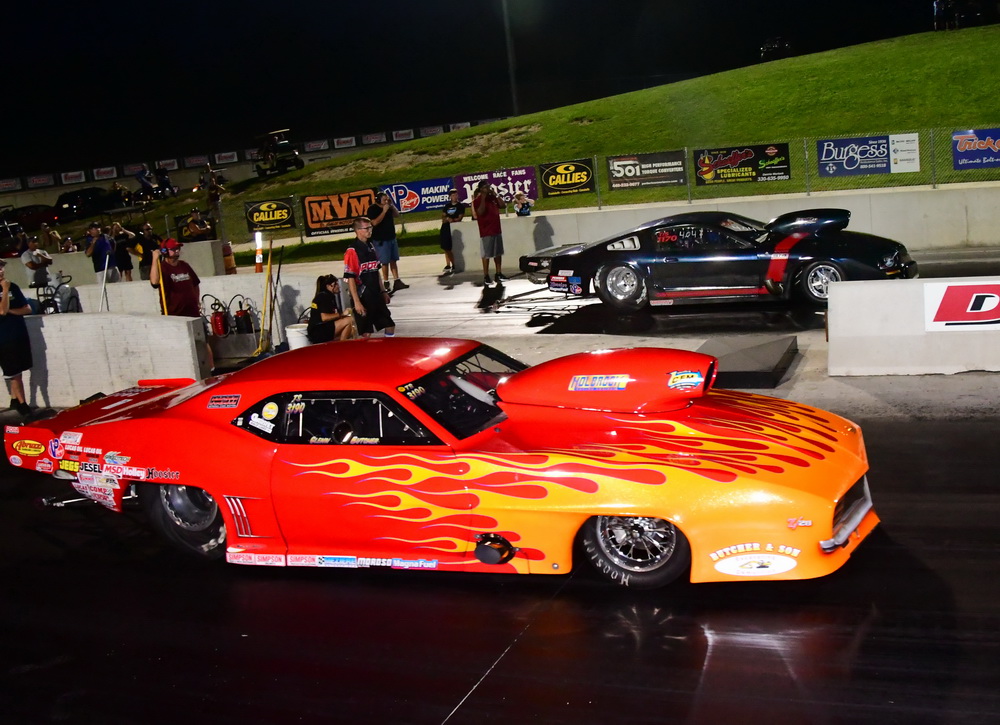 THE SPORTSMAN REPORT - Dolestown, Ohio’s Glenn Butcher earned the home-race victory after taking on some of the toughest racers in Elite Top Sportsman in his nitrous-assisted ’69 Camaro. He defeated Erica Coleman, Travis Harvey and Louis Ouimette on his way to the final round, where he met points leader Scott Moore. Moore left with a .002 light in his nitrous-assisted Mustang, but Butcher was better at the finish line with a 4.092 on a 4.09 dial-in compared to Moore’s 4.079 on a 4.04 dial-in.

In Top Sportsman 32, Valdosta event winner Chris Nyerges was denied his second consecutive win when he broke out in the final round alongside Buddy Perkinson. Perkinson won with a 4.432 on a 4.42 dial-in, while Nyerges went 4.517 on a 4.52 dial-in.

It was a battle of young guns in the Elite Top Dragster final round, as Zack Fisher took on Kellan Farmer. Fisher ran right on his dial-in twice on his way to the final round, taking out championship contenders Nick Hamilton, Kyle Harris and Chase Beverly. Farmer matched that feat, then Fisher used a 4.066 on a 4.05 dial-in in his ProCharged dragster to beat Farmer’s 4.05 on a 4.02 dial-in in his nitrous-assisted Race Tech dragster in the final.

In Top Dragster 32, a starting line advantage allowed Noah Johnson to defeat Kimberly Messer in the final round. Johnson ran a 4.853 on a 4.83 dial-in, while Messer went dead-on her 4.67 dial-in just one race after the Jr. Dragster graduate won her first event in a “big car” at the Summer Nationals.

The next stop on the 2019 PDRA Tour is PDRA Drag Wars VI presented by Pro Line Racing, Sept. 5-7 at GALOT Motorsports Park in Benson, N.C. 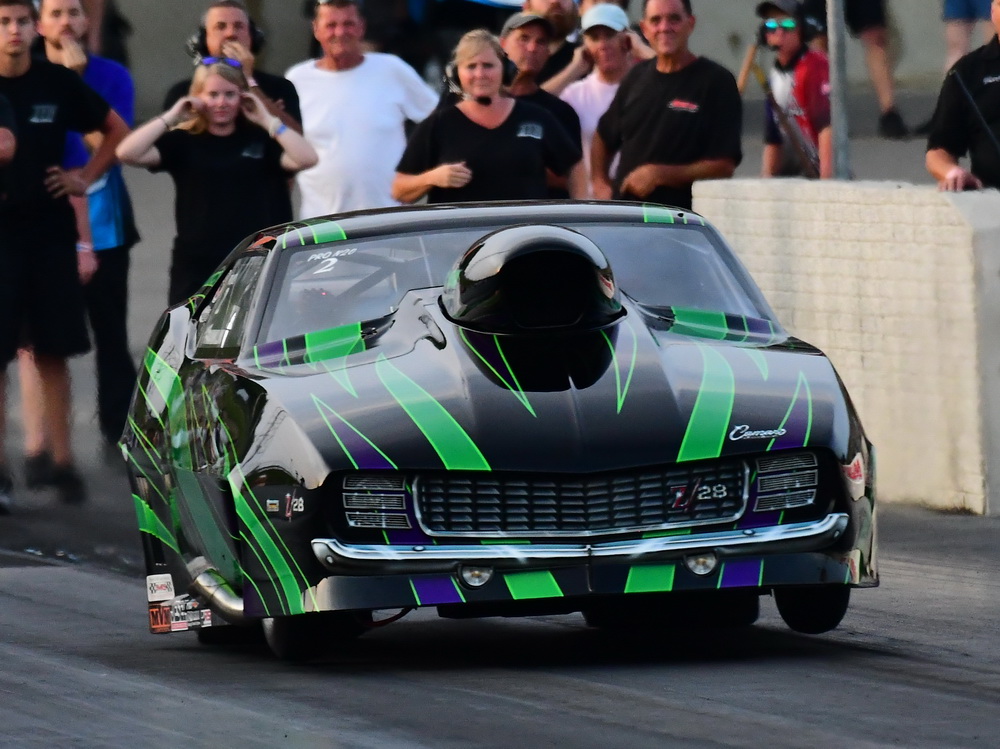 GOT IT BY "THAT" MUCH - With an Accutime timing system that reads out to the ten-thousandth of a second, the No. 1 spot in Pro Nitrous was decided by just two ten-thousandths as Tommy Franklin’s 3.7023 in the Musi-powered “Jungle Rat” ’69 Camaro edged out points leader Jim Halsey’s 3.7025 in his Fulton-powered ’69 Camaro. The final session saw 10 of the 15 competitors run in the 3.70s, making Franklin’s accomplishment that much sweeter.

“I think it's obvious that there are a lot of good players out here, but we're after ourselves,” Franklin said. “This championship is out there and we want to go after it. We're just trying to race smart and do our thing. We've got good power. The Musi power has been really good. Hat's off to everybody out here. The teams are so good. This has to be the best class in racing right now. I love it. The competition just drives us to go a little bit faster.” 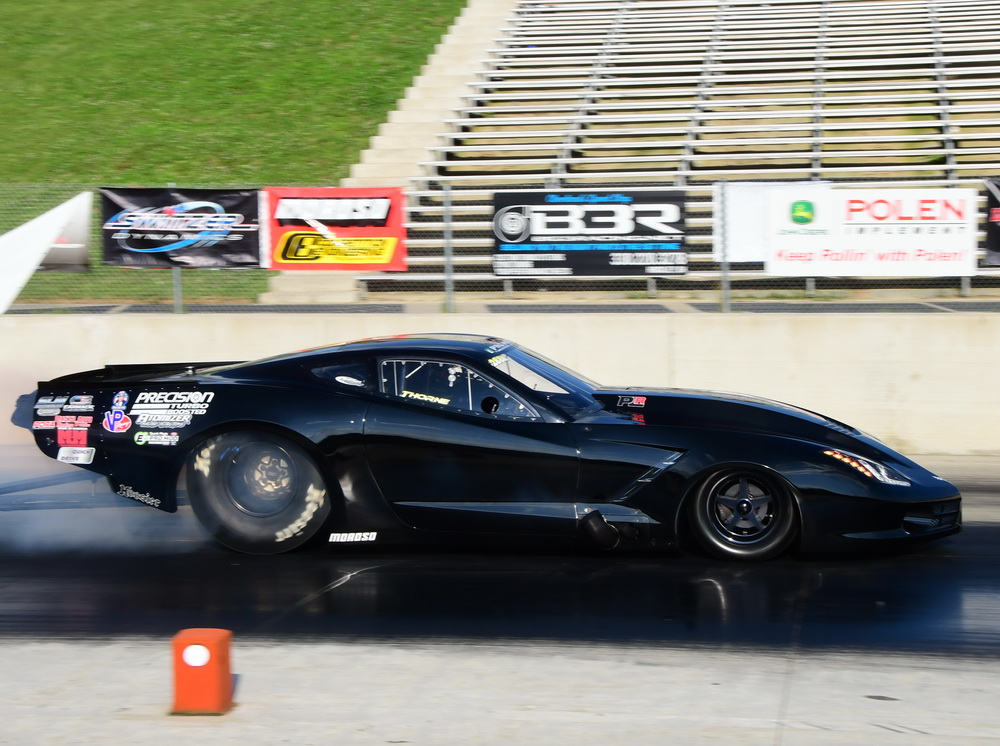 HOT IN THE HEAT - Kris Thorne wasn’t sweating the hot conditions in his Mikey Rees-tuned ’16 Corvette. The Florida native laid down a 3.733 at 213.78 in the twin-turbocharged, Pro Line Racing-powered entry during the third qualifying session, capping off a string of runs in the 3.70s. Thorne will start eliminations from the No. 1 spot for the third consecutive race.

“Everywhere we've ran well has been in the heat,” Thorne said. “We've actually kind of struggled with making more power in the cooler weather. We've always been really competitive and on our game in the heat. It's actually where we shine. We've had a lot of heat this year, so the weather's been on our side. With the twin-turbo power from Pro Line, everything’s really been working well for us.”

Thorne’s first-round opponent will be Pat Moore in former Cleveland Cavaliers player Larry Nance’s ProCharger-boosted ’68 Camaro. Kevin Rivenbark qualified No. 2 with a 3.754 at 197.89 in the ProCharged GALOT Motorsports ’69 Camaro, followed by the similarly ProCharger-equipped Coast Packing ’69 Camaro of Eric Gustafson with a 3.788 at 197.63. 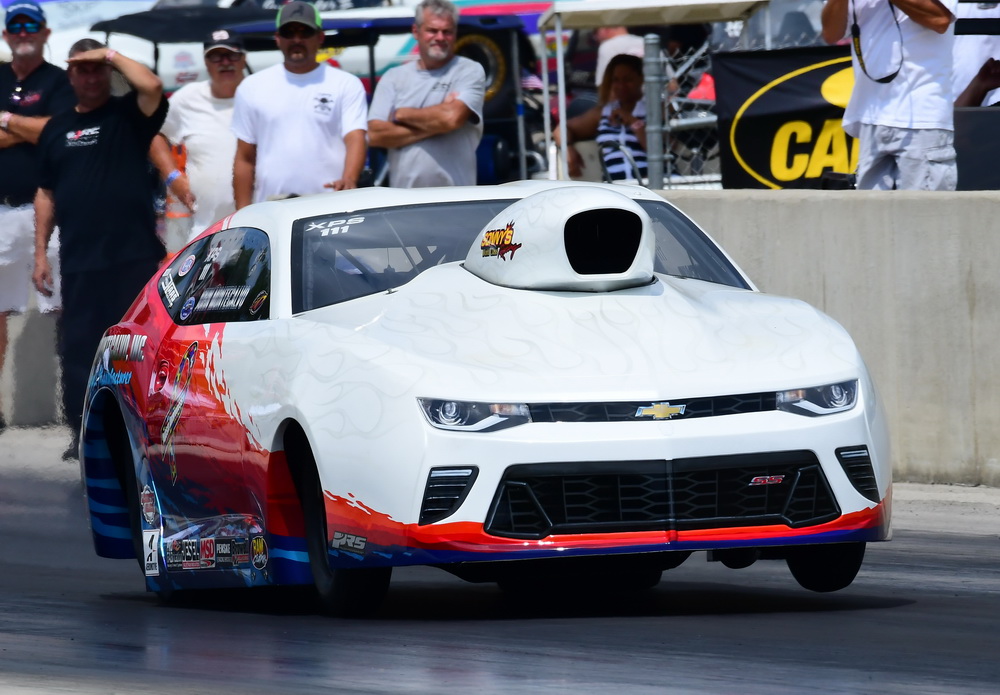 MONTE'S HAULIN' - The ultra-competitive Extreme Pro Stock group showed off during Friday’s night session, as a trio of drivers recorded 4.15s to lead the eight-car field. Class veteran John Montecalvo was the quickest of the three with a 4.150 at 173.28 in his Tommy Lee-tuned ’18 Camaro. It was exactly what the New York driver needed as he chases the world championship from the No. 4 spot in points.

“It's really been tough over here,” Montecalvo said. “It's incredible that there were three .15s out there. We're coming off a No. 1 and runner-up finish at Valdosta, the last race, so we have a bit of momentum going. Elijah [Morton] is running great, Chris [Powers] pulled one out, so I really didn't know if our .15 was going to hold up. It's really tough over here and it's getting tougher every day. We really needed those qualifying points. I've lost the championship by 12 points before and that was basically on qualifying points, so now every position counts.”

Montecalvo and his Sonny’s-powered Camaro will take on Johnny Pluchino in the Strutmasters.com ’13 Ford Mustang to start Saturday eliminations. Powers qualified No. 2 with a 4.151 at 173.14 in the Sonny’s-powered ATI Performance Products ’14 Camaro. Rounding out the top 3 is Morton and his 4.157 at 173.68 in the Allen-powered Morton Brothers Motorsports ’18 Mustang. 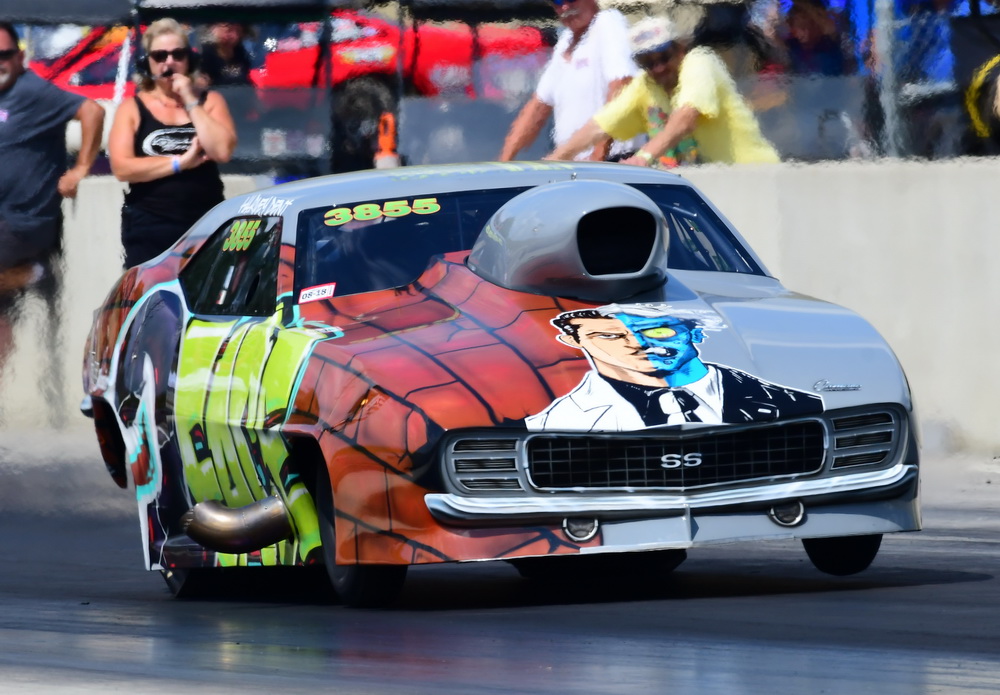 THE TOP SPORTSMEN - A trio of nitrous-assisted entries raced to the top of the qualifying order in Elite Top Sportsman. Aaron Glaser is the provisional low qualifier with his 4.012 at 184.73 in the “2Face” ’69 Camaro, followed by Gary Grahner in his ’63 Corvette with a 4.043 at 184.50. Travis “The Carolina Kid” Harvey, who won this month’s Big Dog Shootout at Piedmont Dragway in North Carolina Thursday night, ended up third in his ’14 Camaro after running a 4.044 at 177.30. 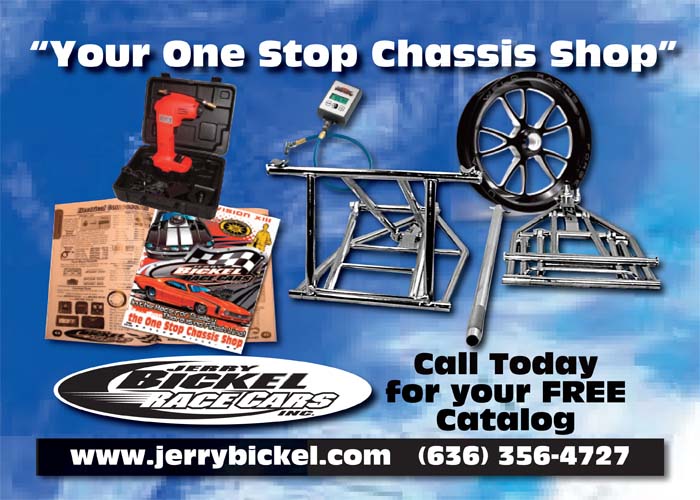