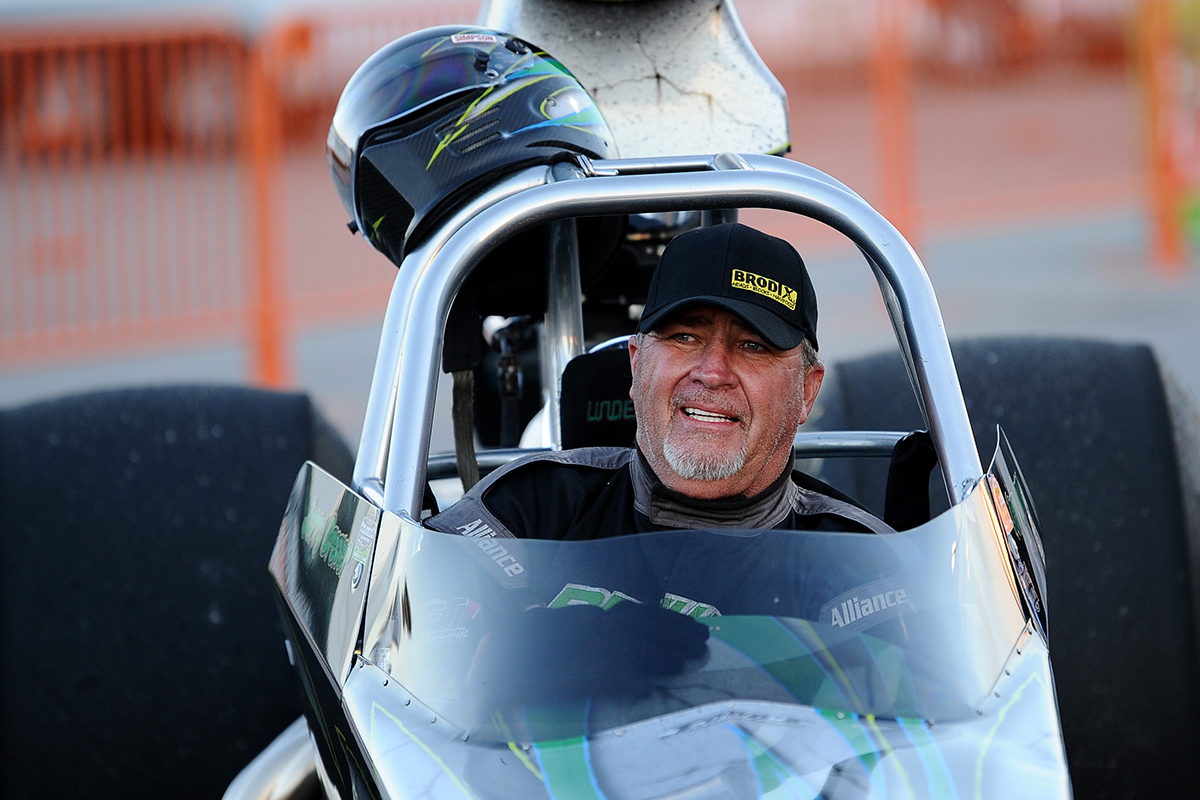 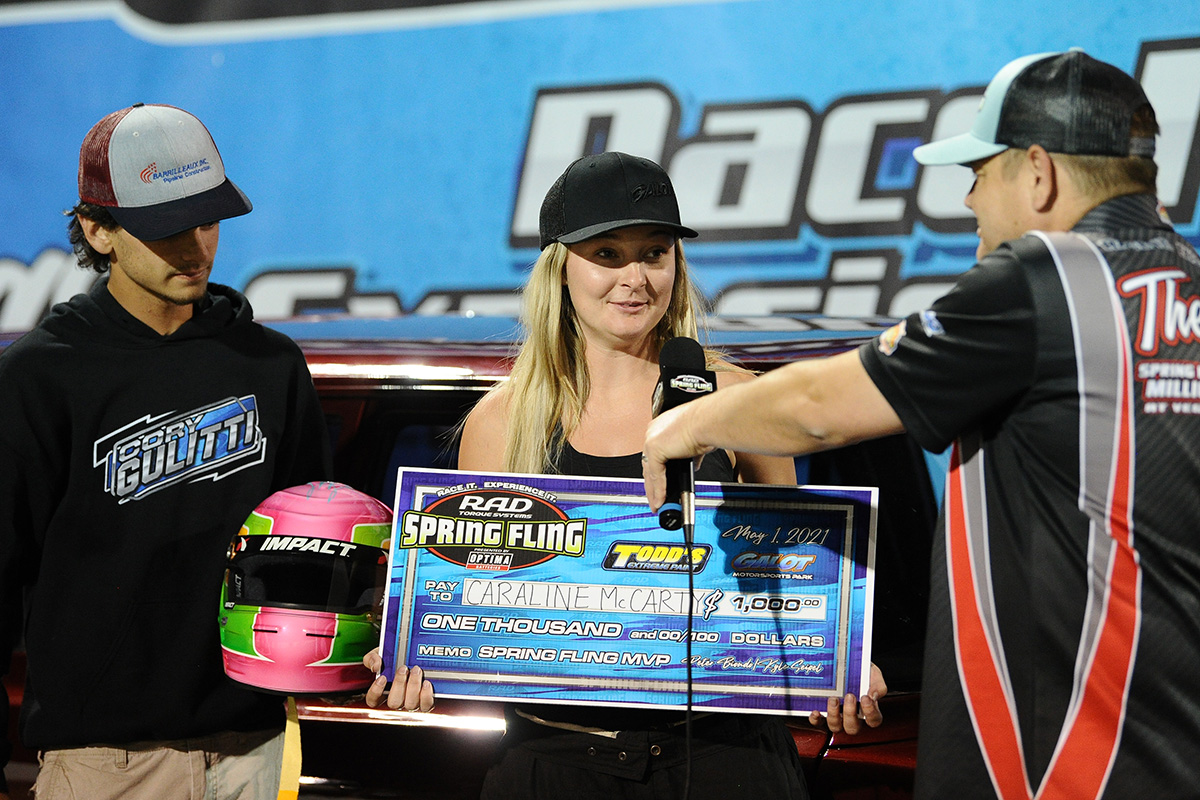 The Fling staff had been watching the ‘71 Barracuda roadster of Tim Quintin throughout the week and chose to award him the custom artwork for crew shirts courtesy of Todd Barton Design. Three names had reached the shortlist of potential candidates for the MVP award until one racer stood out above the rest throughout Saturday’s eliminations. The quarterfinals began with Caraline McCarty using a .022 advantage on the tree to advance past Thomas, running “dead-on” eight. Brewer put down .011 total against the redlight of Kolibsky, while Batcher laid down a .006 package taking .007 on Balducci. In the final match-up, Martel turned it just one thousandth red against the .013 package of Plott.

Plott, just three thousandths behind on the tree against McCarty, ran it down “dead-on” five on the 4.64 dial to earn his place in the $25K final round. Brewer used a .037 advantage off the line against Batchelor to face off with Plott.

The final round rolled into the water with the Fling crew eagerly looking on to find out who would be taking home the last big check of the weekend. Brewer left .002 with a .013 advantage over Plott, with Plott breaking out by just one thousandth in an attempt to run his opponent down.

The Wiseco Performance Products $25K Spring Fling trophy was handed off to an emotional Brewer after his .012 package in the final. “This is one of the best races of the whole year for me. It’s not a million dollars… but it’s a million dollars to me,” Brewer said of his victory. 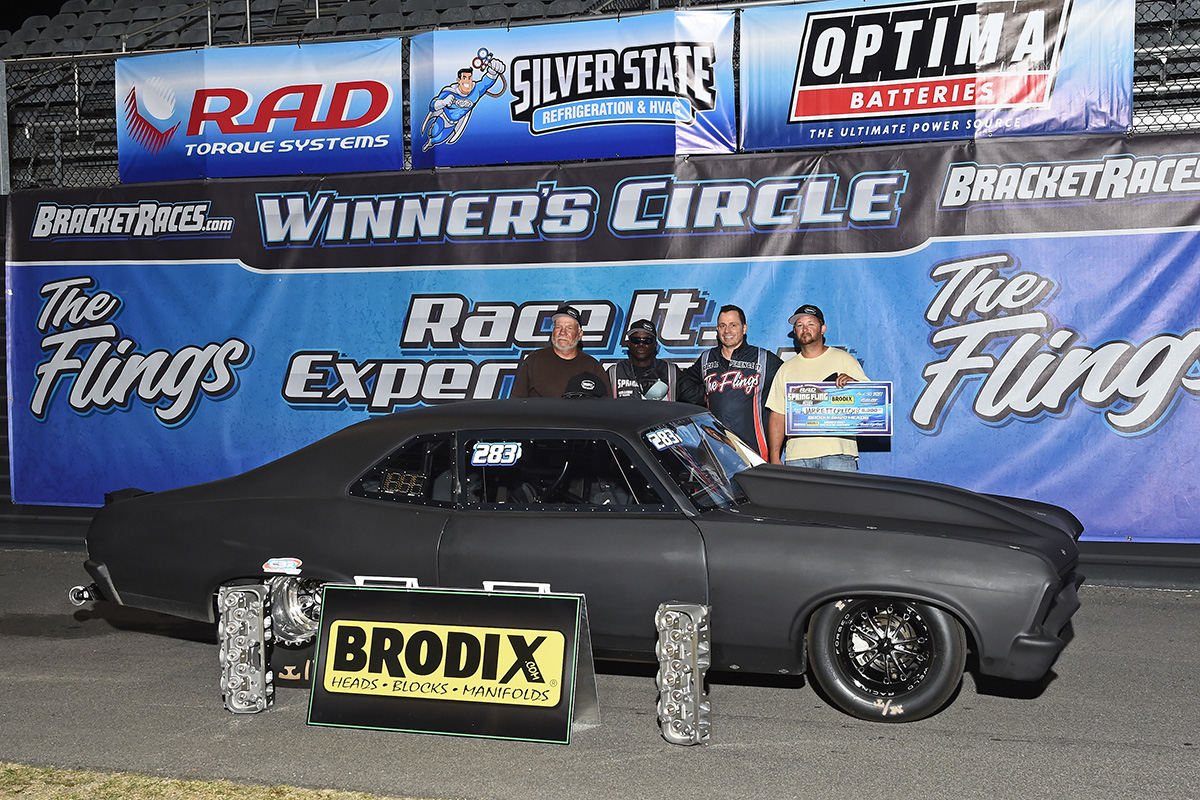 Silverstate Refrigeration $100,000 Main Event Friday brought much more than the highest purse up for grabs during the RAD Torque Spring Fling presented by Optima Batteries at GALOT Motorsports Park.

The morning began with the Spring Fling Reaction Time Challenge where 25 drivers made a hit at the tree in hopes of putting some cash in their pockets before opening ceremonies. Josh Luedke, Shane Carr, Jake Woodring, Bradley Snowball, Brianna Lukhard, and Tony Meltvedt all let go double “O” and each of them were rewarded $100 cash on the spot.

As the early rounds progressed after 347 entries appeared in round one, co-promoters Peter Biondo and Kyle Seipel determined that time would allow them to bring back the 32 Door Car Shootout contested in years past. Silverstate Refrigeration immediately came on board to guarantee $10,000 to the winner of the shootout, and a $500 cash bonus to the best wheelie as determined by the Fling staff.

The sun was beginning to set and the Mullis Race Cars Racer Appreciation Party was just getting started with music, free food, and activities for the kids. Eight cars paired up for the quarterfinals including Matt Dadas, Jeremy Popple, Lee Dixon, Jeff Serra, Mark Bridgers, Gary Williams, Tim Markoglu, and Corey Manuel. The semis would be the match-ups of Tim Markoglu and Jeff Sera, and Jeremy Popple and Gary Williams.

Meanwhile, the 32 Door Car Shootout had dwindled down to four drivers. Michelle Martel knocked Michael Dilorenzo out of competition with a .012 package in her S-10. The pair that followed was the ‘67 Camaro of Brian Martel who laid down .019 total — .007 more than his wife in the previous pair — to move past Dean Turner, making it an all-Martel final round for the $10,000. 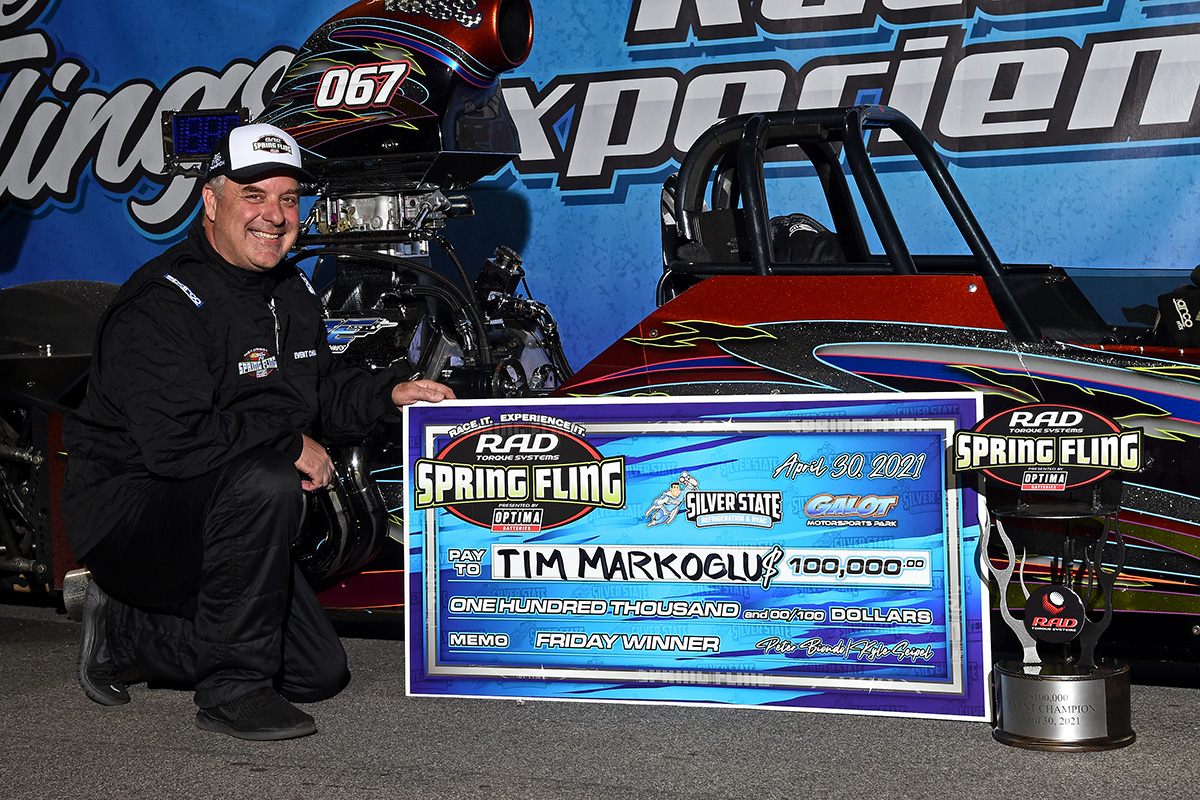 Music blared from behind the tower as onlookers lined up against the fence for a view of the $100K semifinals. Popple’s ‘95 Firebird rolled up next to the ‘14 Phantom dragster of Williams. They left three thousandths apart on the tree with the advantage favoring Williams and less than .0006 at the stripe advanced Popple to the final. Markoglu used a .004 to push Serra to break out just three thousandths to earn his place next to Popple to race for the $100,000.

The stage was set for three consecutive finals rounds to take place back to back. Markoglu and Popple pulled into the water box for the $100,000 final round and the winner was decided by the redlight of Popple. Markoglu ran it down to be “dead-on” zero, .011 total, for the win.

The next round was the Brodix Best Package Runoff for the SR20 cylinder heads between the door car of Jarrett Creech and the dragster of Cody Strickland. Creech qualified for the runoff with a .002 package, while Strickland snuck in after being .001 total. The drivers were separated by just a thousandth on the tree, both double “O,” and Strickland’s breakout by three thousandths awarded Creech the aluminum cylinder heads.

The last final round that would conclude on-track activities was the husband and wife round of Brian and Michelle Martel for the Silverstate 32-car $10K Shootout. Brian used his advantage on the tree to turn on the win-light after Michelle broke out six thousandths trying to run him down.

Saturday’s Wiseco Performance Products $25K Saturday will be the last day of competition at the RAD Torque Spring Fling presented by Optima Batteries. Tomorrow morning will begin with new entry time runs at 9 a.m. and a Fling Family Photo by the starting line. 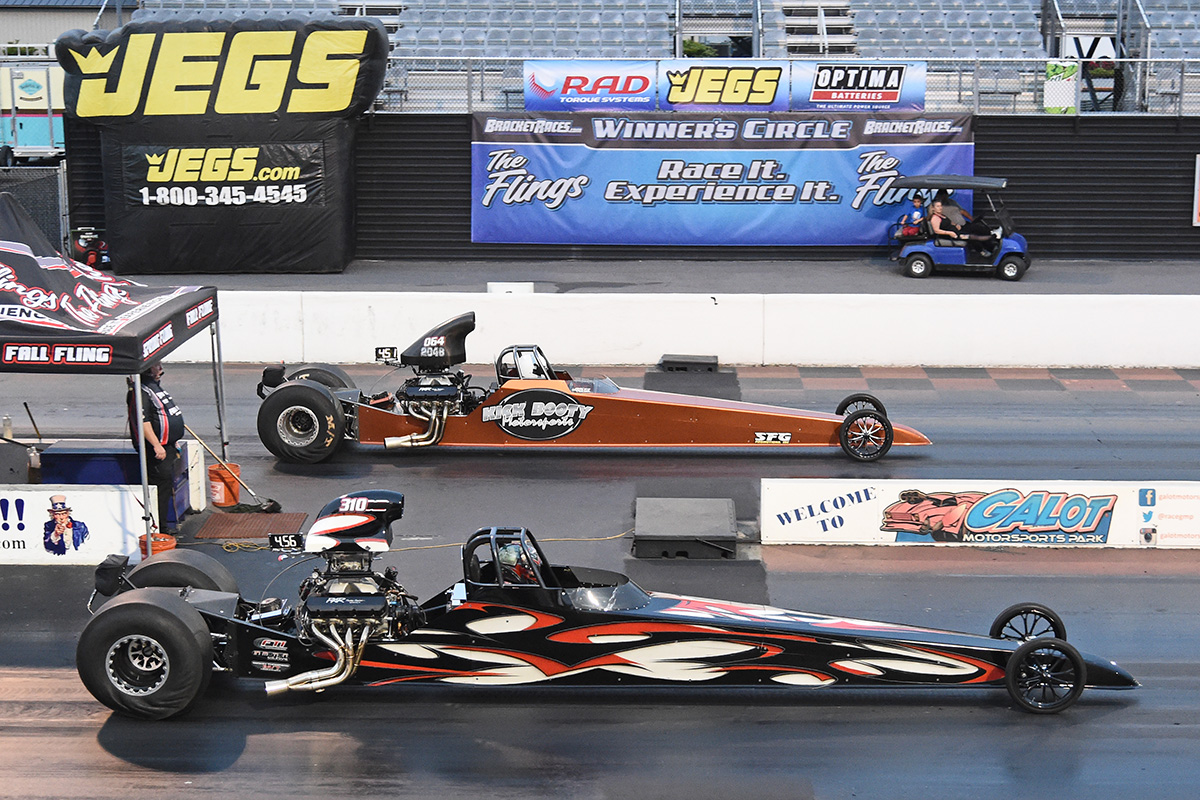 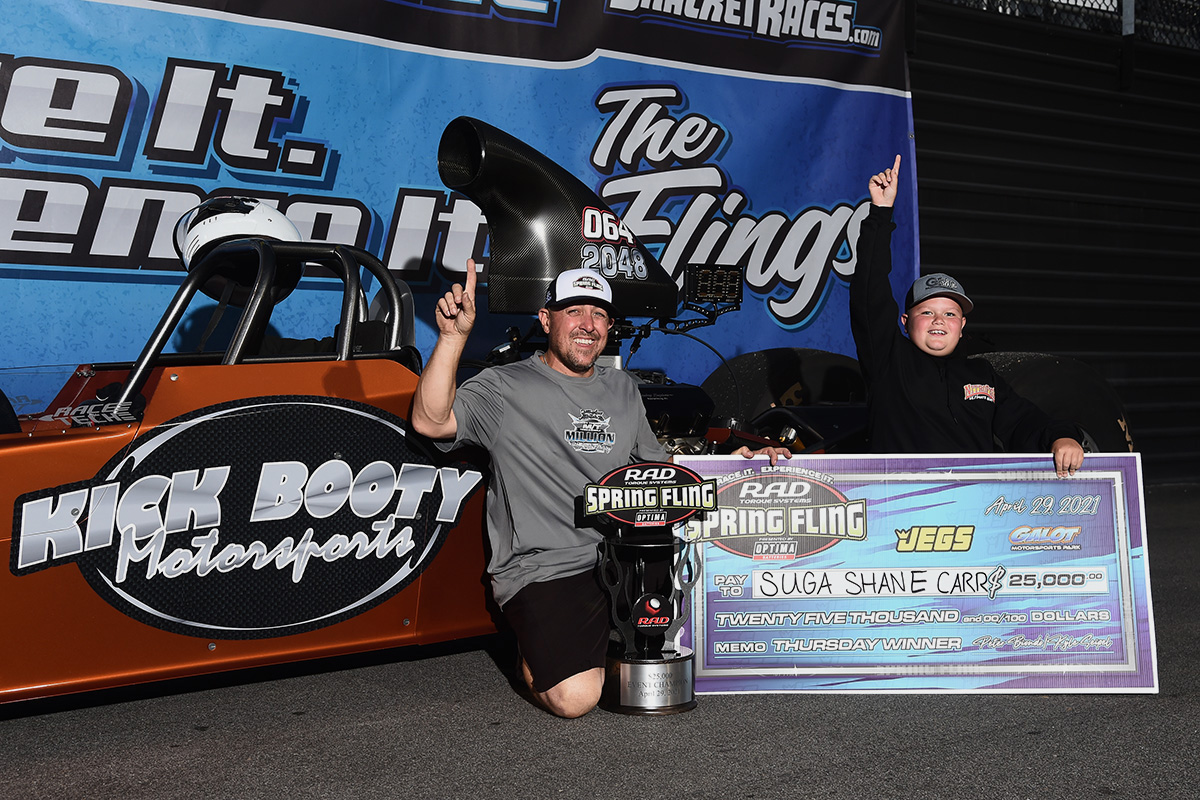 The action continued into JEGS Performance Thursday where the stakes grew higher at a $25,000 purse. Racers were greeted with a persistent headwind that grew stronger into the afternoon at the RAD Torque Spring Fling presented by Optima Batteries.

The ripple of the American flag atop the grandstands persisted as the sun began to dip below the mass of trees framing the dragstrip. Jerry Brewer, Scotty Gibson Jr., Mike Bloomfield Jr., Jeff Verdi, Jason Lynch, Shane Maddox, Scott Albrecht, Caraline McCarty, Gary Eitel, Wesley Roberts, Bryan Balducci, Austin Brown, Shane Carr, Nick Womack, Jeff Serra, and Chad Duke were the 16 drivers that made up the ladder in round six.

Verdi came out on the better side of a double breakout against Bloomfield, while Albrecht advanced past McCarty’s redlight. Gibson’s .010 package locked Brewer out, and Maddox tightened it up .005 at the stripe against Lynch to move on. Balducci put down .010 total against Brown for the win, while Serra moved into the quarterfinals after Duke’s .002 redlight. Carr’s .014 package knocked out Womack, and the last match-up for round six was decided by Eitel’s redlight to advance Roberts. 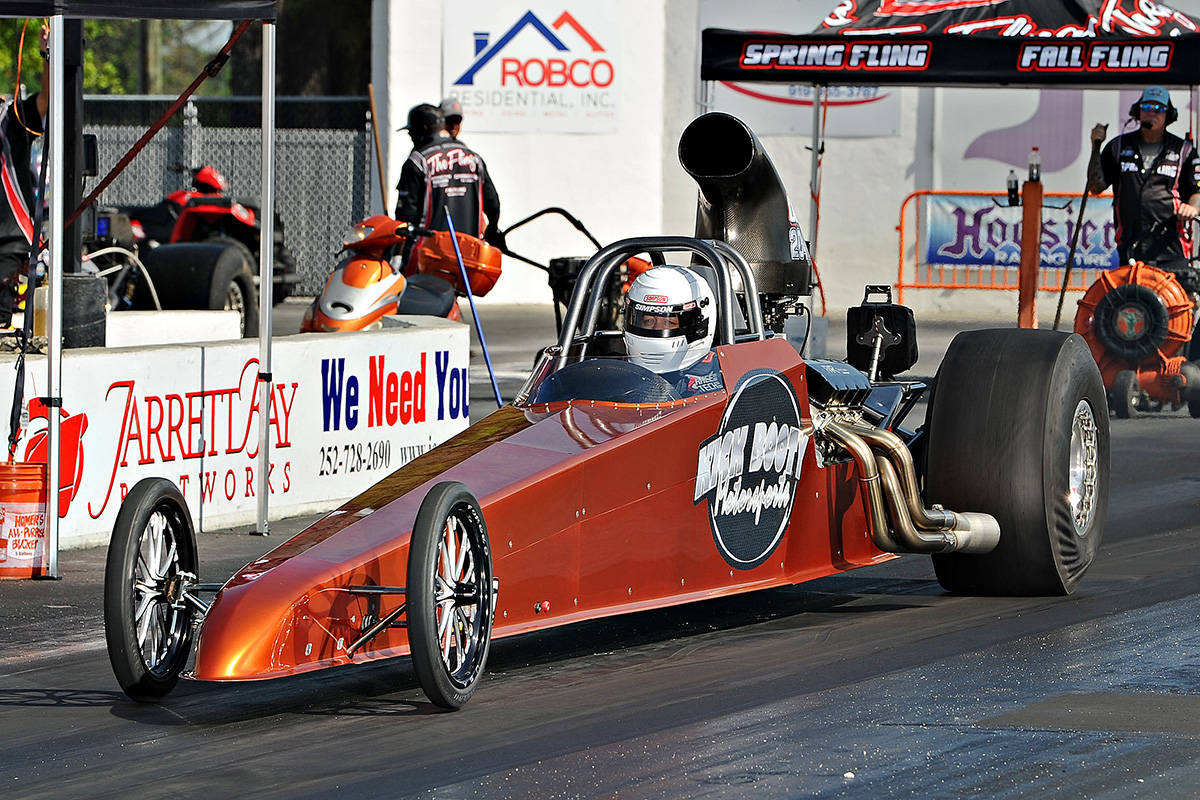 Verdi and Serra led the quarterfinal pairings and were separated by just one thousandth on the tree; though Verdi took .003 at the stripe, Serra was the lesser of the two breakouts being .002 under the 4.52. Maddox’s .001 move over Balducci put him in the semifinals opposite Serra. Scott Albrecht put up .010 total against Gibson, taking .009 at the stripe. Shane Carr managed to drive around the .000 light of Roberts with a .007 stripe and broke out by just two thousandths versus the .009 breakout of Roberts. On the other side of the ladder, it would be Carr and Albrecht in the semis.

Carr and Serra’s dragsters came to life to pull into the water box for their monster match-up of a final round. Both drivers flickered into the bottom pre-stage, Carr leaving with a .020 and Serra with a .014. Serra’s .024 stripe proved to be just three thousandths too much, and Carr ran .015 above the 4.51 dial for the $25,000 JEGS Performance Thursday win.

Friday brings our main event — the Silver State Refrigeration $100,000. The Spring Fling Reaction Time Challenge will precede the beginning of eliminations, with 25 randomly selected drivers staging up to hit the tree. Any driver with a double “O” reaction will receive $100 and for every perfect light there is a $1,000 reward. If a racer is perfect they can come back for another look at the tree, and if they post a .000 a second time they will be paid $10,000 on the spot. A cloudless sky and warm temps set the stage for the FST Carburetors Wednesday 15K at the RAD Torque Spring Fling presented by Optima Batteries. The second day started off with a single time run for all drivers on property. After Clayton Roberts grabbed the big check Tuesday evening in the Mullis Race Cars $20,000 shootout, 314 Fling competitors staged up during the first round of the warm-up race to take a swing at the $15,000 up for grabs.

Gulitti had the lesser of the double breakout with Brown, running just two thousandths under the 4.51 dial. Brannon and Daymude had identical .007 breakouts which would mean the winner had to take .007 or less — and Brannon did just that to advance to round 6. Thompson used a perfect light to get the win against Saracco, while Boulia took .003 on Hicks to move on. Burleson locked out Butner with a .006 package, and Labbous fought off Ezell with a .008 light and taking .006. Finally, Bodnar defeated Albrecht by laying down .011 total.

Eight drivers returned for the quarters and the first pair was decided by the redlight of Boulia that would move Burleson into the final four. Gulitti advanced by way of Thompson’s two-thousandths breakout, and the story was the same for the following pair. Bodnar’s .005 breakout granted Brannon a place in the semifinals in the lane opposite Gulitti. The last match of the round saw Labbous tighten it up on Dauber by .004 to face Burleson. 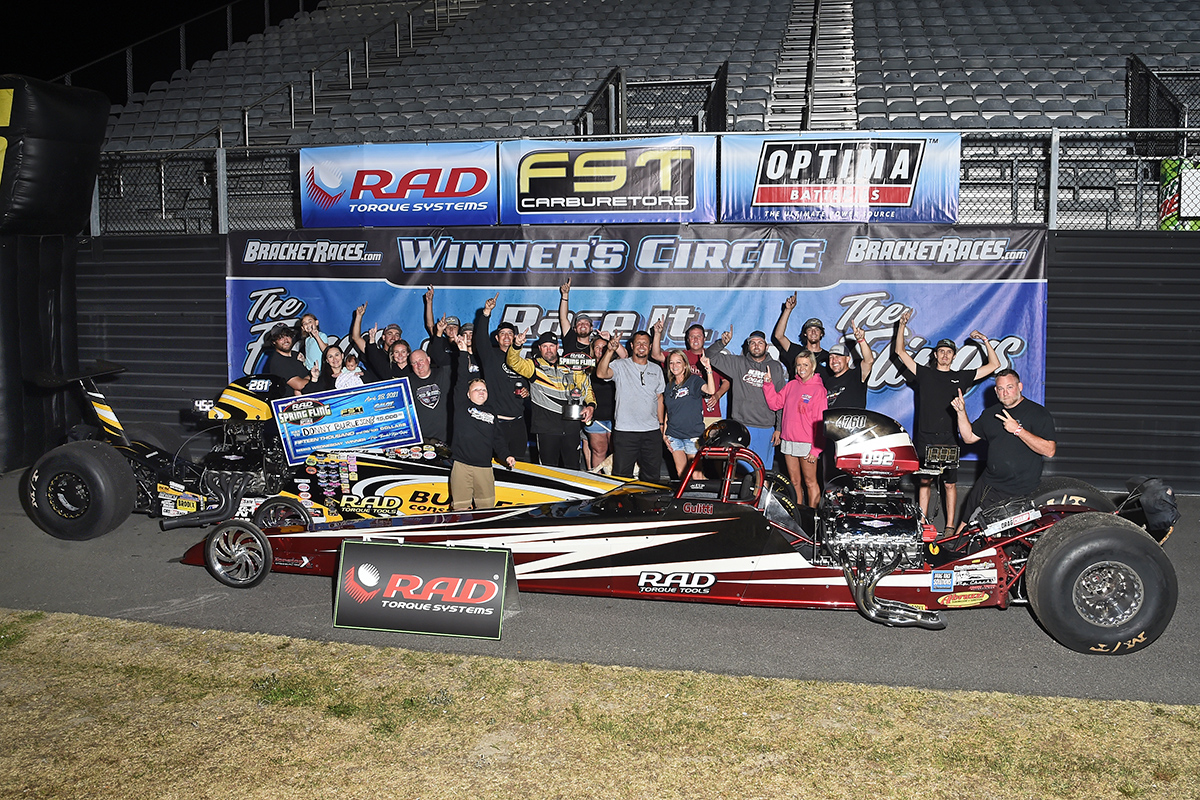 Gulitti and Brannon had a .004 spread on the tree, Brannon having the advantage. The result was a double breakout, Gulitti by just one thousandth and Brannon by three. Brannon took .006 needing to take .004 or less to move on, so Gulitti would go on to make up half of the final round. Burleson’s .000 gave him a two hundredths advantage on the tree over Labbous and full control of the round to meet up with fellow Texan Gulitti.

Two RAD Torque American dragsters pulled up to contest for the $15,000, both machines equipped with Wilson Racing Engines and Abruzzi transmissions and converters. Burleson was .002 and .010 above, taking .002 on Gulitti’s .008 and “dead-on” six for the FST Carburetors Wednesday 15K Warm-Up victory.

On deck is JEGS Performance 25K Thursday which kicks off with a ‘New Entry Time Run’ at 8:15 a.m. To follow is Silver State Refrigeration 100K Friday and Wiseco Performance Products 25K Saturday. Racers poured in through the gates of GALOT Motorsports Park Tuesday morning under sunny skies and a breeze expected to be seen all week for the RAD Torque Spring Fling presented by Optima Batteries.

A pre-entry system had the event sold out within minutes in past years, but as of 2021 there will be no limit on car count and co-promoters Peter Biondo and Kyle Seipel have implemented their “Gate Entries Welcome” policy.

As has been the case with all Fling events on the east coast, the ‘A vehicle can only go down the track once per round’ rule will again be in effect and follow the 15K/25K/100K/25K payout format. Also being implemented as always is TruStart, the ‘Worst Red’ product of Compulink.

Rob’s Automotive, Collision, and Towing Tuesday Test and Tune allowed racers to make as many runs as time allowed from 2:00 - 9:00 p.m. in conjunction with a Mullis Race Cars Shootout exclusive to a 32-car field. The winner would grab the $20,000 big check, runner-up $3,000, and $1,000 would be paid to the semifinalists.

Bo Butner and Chris Reynolds led the final eight shootout competitors as they matched up on a ladder in round three. Butner used an .014 taking .009 to advance himself to the semis. Clayton Roberts was .013 total and taking .006 over Will Holloman, while Tim Thomas earned a spot in the final four by way of Tim Quintin’s redlight. Cameron Manuel utilized his advantage on the tree over Ken Batchelor and will meet with Butner in round four. Thomas will face Clayton on the other side of the ladder. 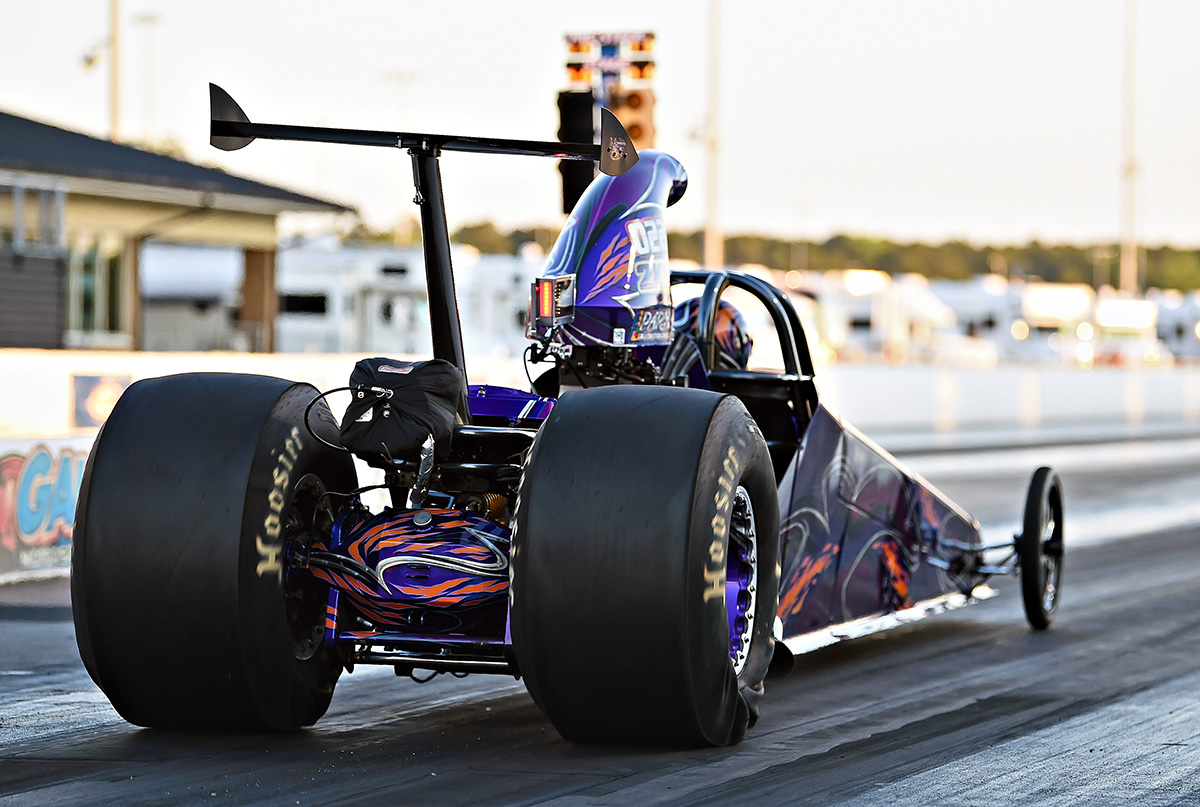 Manuel’s .013 package locked Butner out of a spot in the final round despite the recent 2021 Spring Fling Million champion taking .006 at the stripe. Roberts used a .009 and “dead-on” zero to advance past the .017 package of Thomas and earned him a place next to Manuel for $20,000.

Fuel System Technology Carburetors 15K Wednesday will kick off at 8:30 a.m. with a time run starting with door cars. Racer appreciation prizes from leaders in the industry will be given out from the prize vault including helmets, weather stations, dragster scoops, and more.