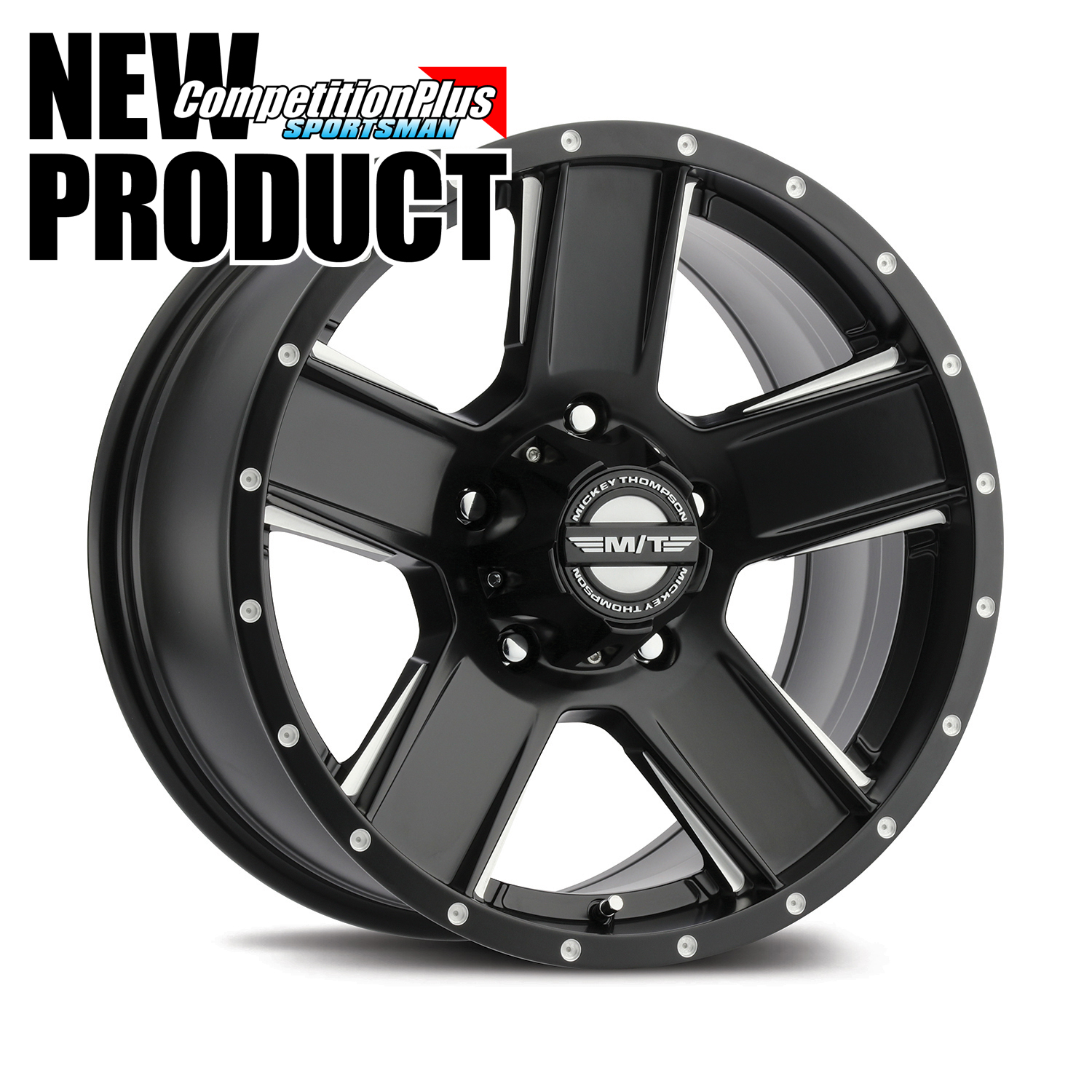 Mickey Thompson Tires & Wheels has enhanced its wheel line up with the new SD-5 Black, which features contemporary styling and a sleek satin black finish. 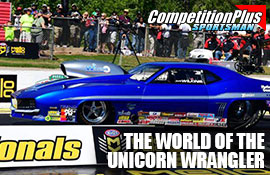 Need an engine that can last 24 hours of side-by-side, day-into-night-into-day racing? Or maybe a powerful 1,500 horsepower build that can powerslide around turns, take massive jumps and maneuver the tightest spaces imaginable?

Known as the “unicorn wrangler” for his prowess in putting together some of the most unique power plants in motorsports, whether your race is less than 10 seconds or more than 24 hours, if it needs to go fast and be consistent, Sandy Wilkins is your man.

In drag racing circles, Wilkins is well-known for his successes in the world of Top Sportsman. He has produced wins, national records and a few national titles in his decades-long racing career. But some might be surprised to know just how deep Wilkins’ endeavors go.

In the final results of the NHRA Lucas Oil Drag Racing Series Southeast Division event at Atlanta Dragway, past national champions, Kevin Brannon and Jeffrey Barker, as well as a double up win from David Rampy highlighted the list of winners for the fifth of seven events in the Southeast division. 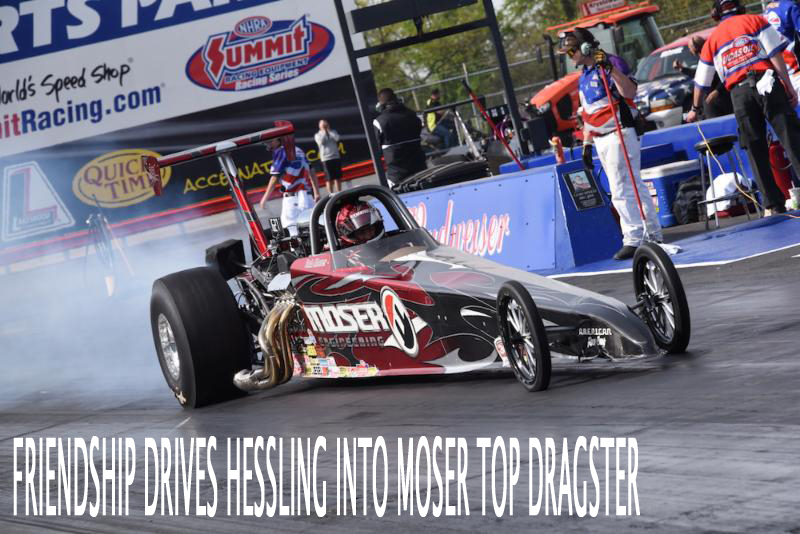 Hessling, who has reached the winner's circle in a variety of classes at Summit Motorsports Park in the past, will be piloting a dragster owned by Rob Moser in the Top Dragster Class at the 10th annual Cavalcade of Stars presented by Budweiser.

"My dragster has done really well with the APD (Advanced Product Design) and ProCharger combination and when people have noticed that and have asked to buy the combination, which is a showcase of sorts for APD and ProCharger, we've sold it, and rebuilt and sometimes that leaves me without an engine for a while," Hessling said in a press release. "Luckily for me, Rob (Moser) had another commitment for this weekend and offered to let me see what I could do with his dragster, which I've tested one time, but I've never raced it."

THIS IHRA CHAMPION HAS HIS HEAD IN THE CLOUDS, LITERALLY

For a long time, David Schmidt wasn't flying down the track. Instead, he had his head in the clouds. 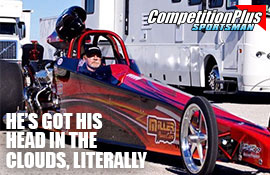 All it took was one trip back to the drag strip and Schmidt was back behind the wheel.

"I raced from 1969-'73 and then I got out of it," Schmidt said recently at an IHRA Summit Sportsman National Championship event in Darlington, S.C. "I flew hang gliders for 13 years, but about 1992, I decided I wanted to go watch drag racing again. I was just going to watch and I ended up buying a racecar." 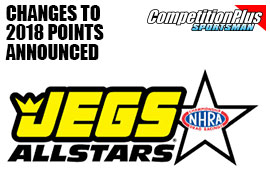 NHRA announced a change to the structure in which racers earn points toward a berth in the popular JEGS Allstar program.   Beginning with the 2018 JEGS Allstar event, racers will now count their best five in-division events toward their JEGS Allstar point’s total.

Previously a racer would count all in-division events toward their points total but by moving to a racer’s best five events, it will open the program up to more JEGS Allstar hopefuls.   The point’s structure will continue to be a 12-month point’s battle in that events in the second part of 2017, along with events at the beginning of 2018 will count towards a racers 2018 points total. 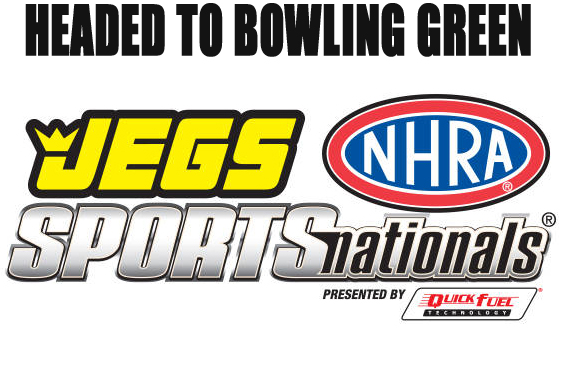 JEGS NHRA SPORTSnationals returns to Beech Bend Raceway Park in Bowling Green, Ky., for the second consecutive year on Memorial Day weekend, for three days of intense racing action. The event is set to take place May 26-28 and will once again feature the best sportsman racers from across the country and will have over $108,000 in cash purse and special bonus races plus product contingency awards.

The racing action begins on Friday at 8 a.m. as the racers take to the track for qualifying runs. Super Stock, Stock, Super Gas, Super Street, and Super Comp along with Top Dragster, Top Sportsman and Comp Eliminator will take to the track during the day. 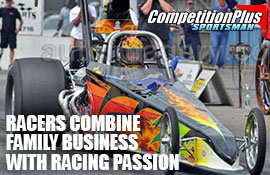 The consensus around the NHRA Lucas Oil Drag Racing Series is the Laris Family has the market nearly cornered on the fine art of storytelling, which often leads to uncontrollable laughter. Truth be known, there are those who will say they are even better insurance agents.

Now the business model appears to be expanding. 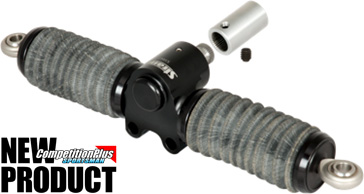 The quickest Nostalgia Funny Care race in Firebird History took place in the final round.  Rupert, out of Anaheim Hills, Calif., faced off with Dan Horan, Sylmar, Calif., in a ’69 Camaro battle.  Horan made a strong pass down the lane but he was no match for Rupert. Rupert had the starting line advantage and saved his best pass for his last making it a decisive win in his favor with a winning lap of 5.602 seconds, 256.80 mph. Horan had a runner up pass of 5.765 seconds, 247.52 mph.