The afternoon could not have gone any better for the whole Andretti team overall, which scored its first 1-2-3 finish since 2005. Alexander Rossi finished second, while Ryan Hunter-Reay finished third.

“It’s so huge,” team owner Michael Andretti said. “Man, 1-2-3, after the way things have been going for us this year. This is huge for us, the whole team.”

Dixon still leads the overall point standings but saw his overall lead shrink yet again after he made a rare mistake on Lap 22.

Running fifth and under pressure from Rossi and Hunter-Reay, Dixon hit the curbing in Turn 1, causing him to spin and lose 15 positions.

The five-time series champion entered the race weekend with a 96-point lead over Newgarden, but that lead has since shrunk to 72 points.

“I’m so bummed for the team. Total rookie mistake,” Dixon said of his spin. “Such a stupid mistake I shouldn’t have made.” 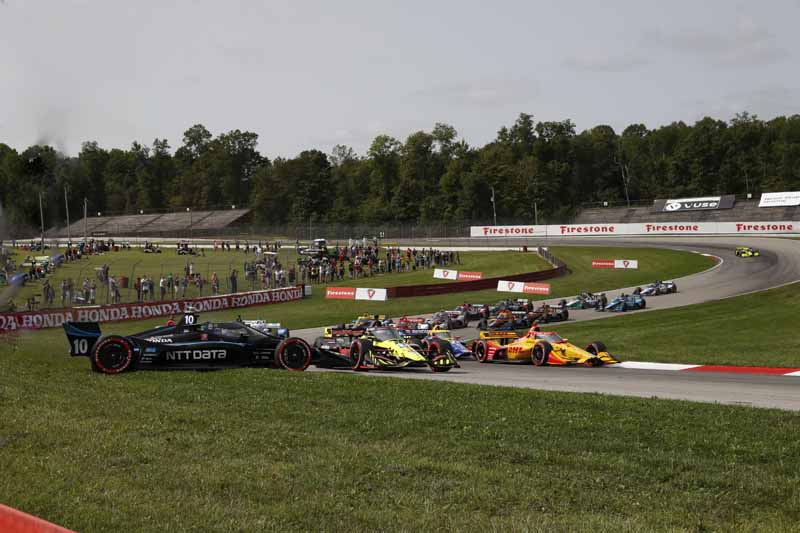 The start of Sunday’s 75-lap event was a hectic one, as multiple cars were involved in an accident that ended the afternoons of an IndyCar rookie and a sophomore.

Santino Ferrucci, who started the race in the second position, was given a penalty for avoidable contact when he hit the No. 55 car of teammate Alex Palou. The crash also collected the No. 10 entry of Felix Rosenqvist.

Ferrucci was attempting to pass Colton Herta for the lead on the outside in Turn 1, but his car went off-course into the grass. Ferrucci then reentered the racing surface but collided with Palou.

“That’s not how I wanted to end my day,” Palou said. “I had a good start but then I saw a car coming towards me. I moved to the right a bit to try and avoid him, but I couldn’t go very far because Felix was next to me and we ended up both getting hit and taken out. It just wasn’t our weekend.”

The NTT IndyCar Series now heads back to the Indianapolis Motor Speedway for a doubleheader on the track’s infield road course. Race one of the Harvest Grand Prix takes place on October 2 at 3:30 p.m. ET. The race will air live on USA Network.