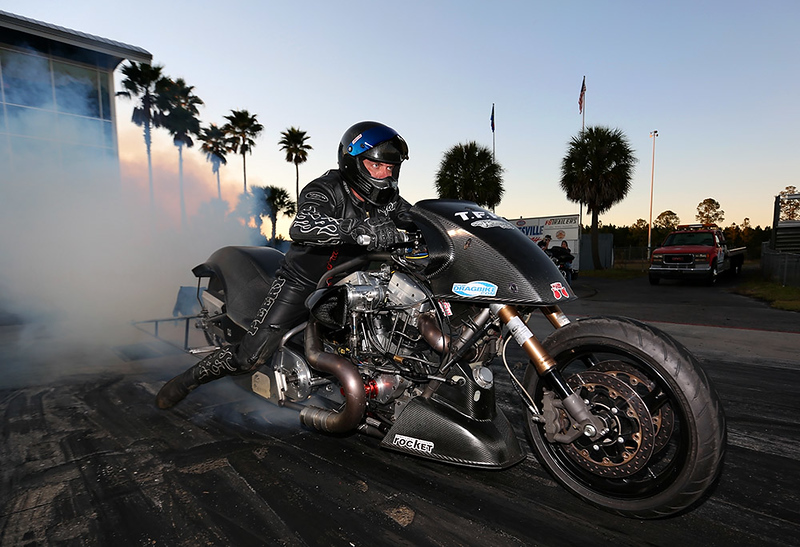 The 2021 AHDRA all-American Motorcycle Nitro World Finals at Gainesville Raceway began in a Florida equivalent of a blizzard—high winds, pouring rain, and temperatures in the 40s. Friday’s testing and Saturday’s qualifying were completely wiped out.

But Florida got back to being Florida on Sunday, with sunny skies and warm temps. And although the weather left the track looking more like a peeling Florida sunburn than anything resembling a dragstrip, the Gainesville Raceway staff and AHDRA drag racers still found a record-setting groove for one full day of nitro-pounding, gasoline-humming action.

Milford, Ohio-based TKR & Associates Top Fuel racer Ryan Peery has had a multi-sanction season that most racers can only dream of: 11 number one qualifiers in 14 races; 8 wins in 11 final round appearances; 2 Wally’s, 2 national records, 2 national championships (AHDRA and AMRA), and NHRA national runner-up. Only Randal Andras’ strong start impeded Peery from winning the NHRA championship as well.

Peery’s domination continued right through the final race of the season, qualifying number one with a 6.30 at 219 miles per hour and running low ET of 6.26 and high MPH of 220 in his semifinal win over Rebel Glover (riding Jake Stordeur’s Knucklehead Racing bike). “Consistency wins races,” has been Peery’s mantra all year, but by the end he was damn quick as well.

“The rain and really cold weather was a little discouraging when we arrived in Florida, but Sunday’s forecast looked great,” said Peery. “The track was a little tricky, a lot of bikes were spinning the tire in testing, but I knew if the track crew could get it together we could run well with the air being as good as it was.

“With one round of qualifying we wanted to be strong off the trailer and we did. We slowed a little in the first round but picked up for E2 with a 6.26.”

“Going into the final, the sun was starting to set and the track temp and air was changing,” reported Peery. “So we made our tune-up adjustments accordingly and ran what we wanted—a mid 6.30.”

A 6.34 to be exact. Kile put .009 on Peery at the tree but Ryan was .010 quicker than Kile’s 6.44 to the stripe to take the win. “Tracey was right there with us but we got to the finishline first. It was icing on the cake to an unbelievable season.

“‘That’s how you finish strong!’ That’s the message my mother sent me when I got back to my phone after the final. She’s my biggest fan.”

Class co-sponsor Tim Kerrigan had to shut off after his E1 burnout with an intake cracked by tire shake in qualifying, and was disappointingly unable to compete.

Defending champ Rich Vreeland qualified third but spun the tire and dropped a hole against Capone in round 1, graciously handing over his number one plate in a peaceful transition of violent power.

“It’s going to be hard to duplicate the season and success I just had, so I’m going to enjoy it through the off-season while it lasts,” said Peery, who’s day job is building train bridges.

“I’m extremely grateful for the luck I’ve had and all the help I’ve had along the way,” finished Peery, who thanked Buddy Johnson, Chris Smith, Jay, Dorothy, Eli, Brett, and Rex with Jay Turner Racing, Mike and Jack Romine, Midwest Containers, RP Motorsports, and “Most of all my mom and dad.”