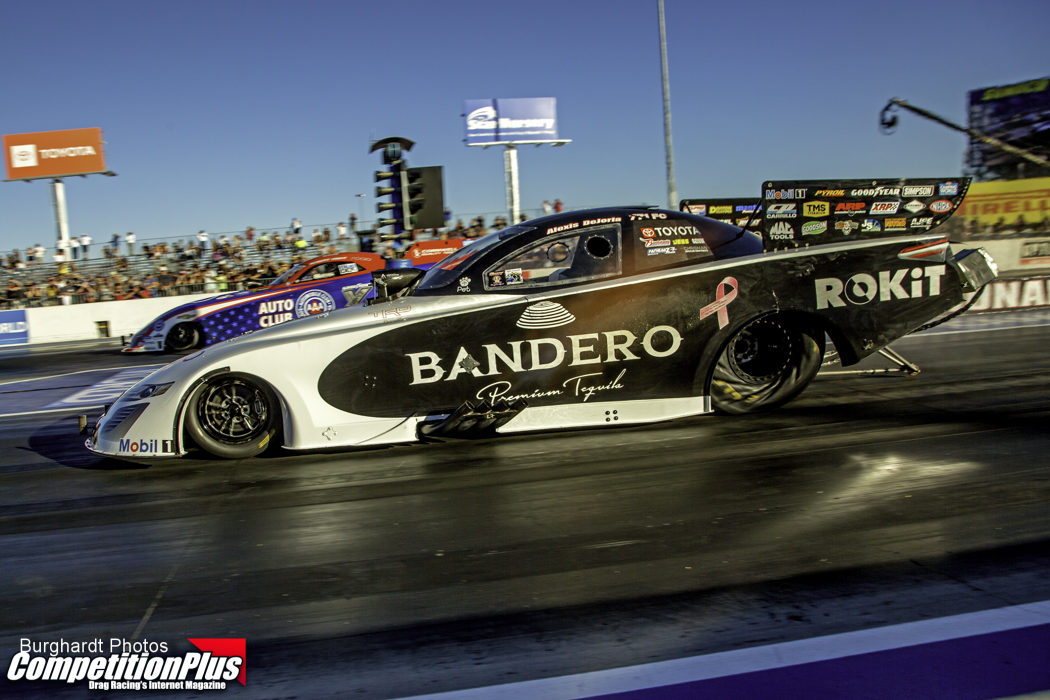 Momentum is definitely on Alexis DeJoria’s side right now.

After qualifying No. 1 and winning the last event on the NHRA Camping Word Drag Racing Series tour in Bristol, Tenn., Oct. 17, DeJoria kept rolling at the Strip at Las Vegas Motor Speedway Oct. 29.

DeJoria clocked a 3.896-second elapsed time at 327.03 mph to claim the provisional No. 1 qualifying position at the Dodge//SRT NHRA Nationals presented by Pennzoil.

DeJoria, who pilots the Bandero Toyota Camry, said the Bristol win was the perfect tonic for her team led by crew chief Del Worsham.

“It’s great to come off a win and come to a track where we have had success before, winning here twice,” DeJoria said. “I think we are hot right now. It is a little late in the season, but it will be nice to go out with a bang.”

Following her Bristol victory, DeJoria arrived in Las Vegas eighth in the points. DeJoria defeated J.R. Todd in the finals in Bristol.

“This is just about everything coming together,” DeJoria said. “Del and Nicky (Boninfante) did some testing with different setups, and it worked, definitely in Bristol. Those lanes were really tough. Once they figured it out, we were on it all day. We are a great team with a fast car and great crew chiefs. I’m a good driver I would say. Sometimes you have all those components, and you just need a little bit of luck thrown your way. That’s what it took.”

This season DeJoria has become a championship contender. She has one win, one runner-up finish in Denver and five runs to the semifinals.

“It a huge relief and a huge weight off our shoulders,” DeJoria said about the win. “We just knew it was just a matter of time. We knew we could do it. We have the car to make it happen. We have all won before. It was just a matter of having everything line up at the same time. It is hard, it really is. But it makes the win so much sweeter.”