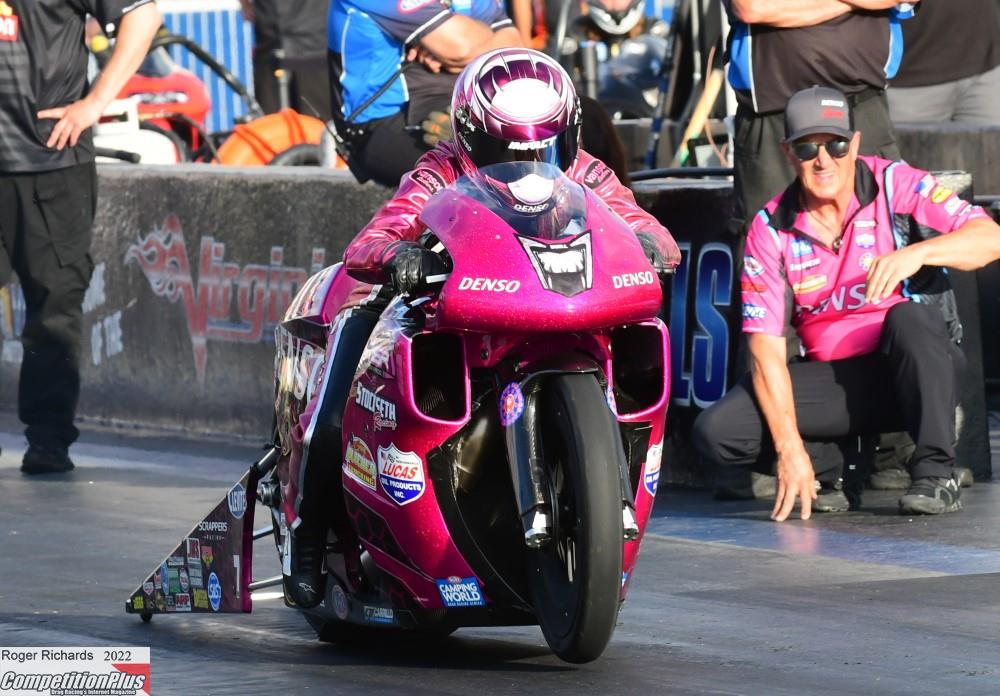 A week ago, Matt Smith said the Buell was competing at a disadvantage against the Suzuki. For at least one day, a week later, his wife proved him wrong.

Angie Smith punched her way into the Virginia Motorsports Park record books on Friday afternoon when she set both ends of the track record, earning her the provisional number one position after the first qualifying session.

Smith, aboard her Denso Buell, laid down a stellar 6.788 elapsed time and a speed of 200.38 miles per hour, marking the first 200 miles per hour Pro Stock Motorcycle pass at Virginia Motorsports Park.

"To go 200, that's exciting," Smith said. "Those numbers are big when it comes up on the scoreboard. All these fans want to see 200 miles an hour side-by-side runs."

Smith's record-breaking run comes on a day plagued by multiple delays due to persistent rain. But despite the ever-changing track conditions, Smith credits the numerous testing sessions from Virginia Motorsports Park, which she calls her second home, for helping her crew chief and husband, Matt Smith, find the correct tune-up to make that run.

"I love this facility," Smith said. "We come here and test a lot, and Tommy and Judy Franklin do an awesome job, and Tyler does an awesome job on the track. We love coming here. So I would say that this is my second home as far as testing. Charlotte's my first of course because it's right down the road. But so far it's good, and hopefully we can keep the momentum going this weekend."

Fourteen bikes made an attempt in the first qualifying session, and Jianna Evaristo (previously Salinas) made her return to Pro Stock Motorcycle competition after a devasting accident in testing in the offseason and currently rounds out the field in the number fourteen position with a 7.408 at 153.65 miles per hour.